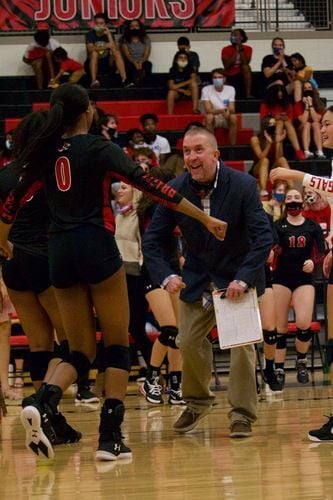 Braswell head coach Corey Jenkins celebrates with his team after they score against Lake Dallas Tuesday in Aubrey. The Lady Falcons ultimately rallied to top Braswell in three of four sets.

LITTLE ELM — Lake Dallas volleyball coach Kristinn Holbrooks didn’t have to do a lot of maneuvering with her lineup after a disappointing loss in the opening set of Tuesday’s match at Braswell.

All it took was one small tweak, and everything else fell into place from there.

Macie Banks, who started the night at right-side hitter, was moved to the middle with her team trailing 1-0. The change almost immediately lit a fire under the Lady Falcons, who won three in a row to overcame an athletic Braswell squad for an 18-25, 25-23, 25-15, 25-18 win in the season opener.

Lake Dallas trailed 22-16 in the second set before its 9-1 run ultimately stole momentum for good.

“Macie is going to college to play right-side, but she’s played middle for us every year,” Holbrooks said. “Any time we can have her in the middle, she’s going to be one of the best middles in the gym. That altered things for us. You can tell the team is comfortable with her there.”

With Banks in the middle, Lake Dallas racked up 13 blocks. Banks had three of those to go with four kills. Caelyn Gunn led the team with 18 kills. Candace Collier and Georgia Stinson had 11 each.

Lake Dallas needed that effort to overcome Braswell, whose size up front with Cortni Adams and Kamille Gibson was overwhelming from the get-go. Kaeden Robinson and Hailey Sayre were also big leaders on offense, and that allowed Braswell to take control early with a 25-18 win in the opening frame.

Braswell was again the aggressor early in the second set, but Lake Dallas wouldn’t go away. A 15-10 lead was quickly trimmed to three, and despite jumping back out to a six-point advantage, Braswell couldn’t string together enough plays.

Lake Dallas tied the set at 23 on a kill from Stinson and didn’t allow a point the rest of the way.

“I think that second set was the key to the match. If we win that, we win the match,” Braswell coach Corey Jenkins said. “We were up 22-16, and we got comfortable. That was the turning point. But these girls have progressed. We have more attacks, kills, and we’re running the offense better. We just need to work on our confidence.”

Braswell’s lack of confidence was evident after Lake Dallas tied the match. The Lady Falcons immediately built a 17-9 lead in the third set and rolled to an easy 25-15 win.

Lake Dallas led 18-8 in the fourth when Braswell began chipping away and narrowed the deficit to 20-17. But a serving error and a kill from Banks extended Lake Dallas’ lead back to five. Braswell took the next point but didn’t score after that. Collier pounded down Lake Dallas’ final two points for the win.

“From a mentality standpoint, this was very important,” Holbrooks said. “A win in the opener sets the tone for your season. I think pulling this one out against a very athletic team, being coachable and making changes to help us against such an athletic team really helped.”