Brooke Slusser’s father recently hung a shelf in the Guyer junior’s bedroom to display all of her awards.

But after Slusser’s unforgettable 2019 campaign, it might already be time for a bigger one.

The Alabama commit did it all for the Lady Wildcats this past fall, leading Guyer to an appearance in its first-ever region final. The Lady Wildcats also matched the school record for most victories in a season, going 35-9 while competing in the toughest district in the state, which included Class 6A champion Trophy Club Nelson.

Slusser averaged a triple-double by season’s end, posting 20.3 assists, 13 digs and 11.5 kills per match. She was named District 5-6A Hitter of the Year and was also selected to the Texas Girls Coaches Association 5A-6A all-star team, as well as the 6A all-state team.

And now, she can add MVP of the Denton Record-Chronicle’s All-Area Team to her already extensive resume.

“I definitely didn’t expect this at all,” Slusser said. “I was hoping I’d get one or two [awards], but I never thought I’d get this much stuff. It’s been awesome. It’s insane. I don’t even know, because I don’t have words.”

Slusser finished the year with 891 assists, 532 digs and 471 kills. She hit .289 and served 58 aces, playing in nearly every rotation for Guyer coach Heather Van Noy.

With Slusser orchestrating the offense, the Lady Wildcats went 12-2 in district play. Three of Guyer’s nine losses came to Nelson, including its last in the region final.

When the curtain did finally close on the Lady Wildcats this year, Slusser had gone from getting the occasional breather to playing entire matches. She was just too valuable to leave on the bench, for any amount of time.

Van Noy admitted as much at several points during the season, but it became evident by November that Slusser had developed into one of — if not the best — player in the Record-Chronicle’s coverage area.

“I think I just matured a lot this year, and realized that if something was going to get done, I have to do it myself,” Slusser said. “But I do feel like I put in a lot of extra hard work this year. It’s really starting to pay off. I just want to work even harder to get to where I want to be by the time I go to college. I have to keep going up from here.”

Slusser still has a year remaining at Guyer before she heads off to Tuscaloosa. And she intends on making the most of it.

The Lady Wildcats return a majority of their team from this past season in 2020, including Kentucky commit Jordyn Williams, Maggie Walsh and Kyndal Stowers, who is the Record-Chronicle’s Newcomer of the Year.

“A few things will have changed, of course,” Slusser said of next season. “We’ll have lost our seniors, but it’s good that we’re keeping most of the team. The goal is [winning] state. That’s what we’re all excited for, and it’s all we’re thinking about.” 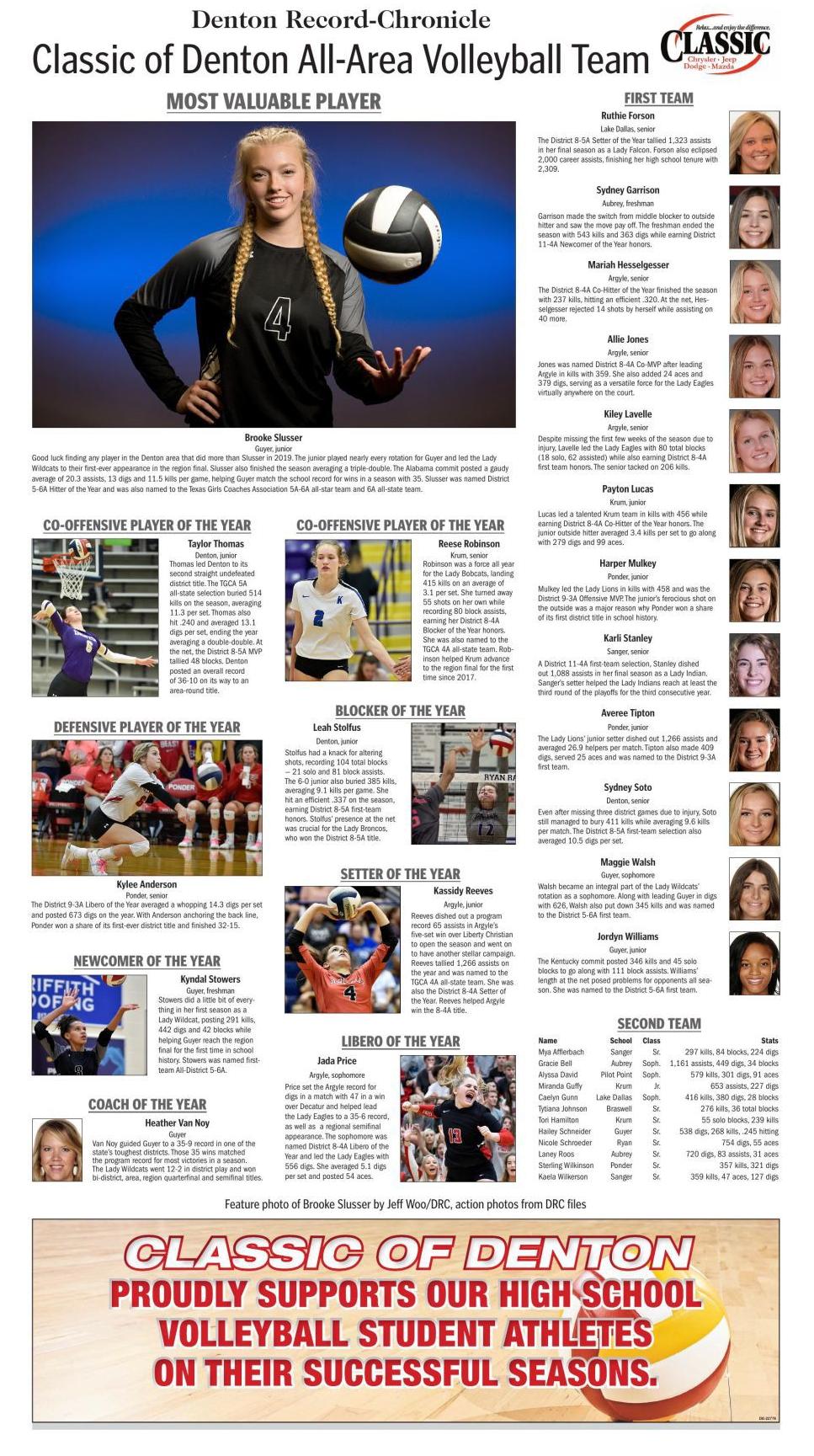