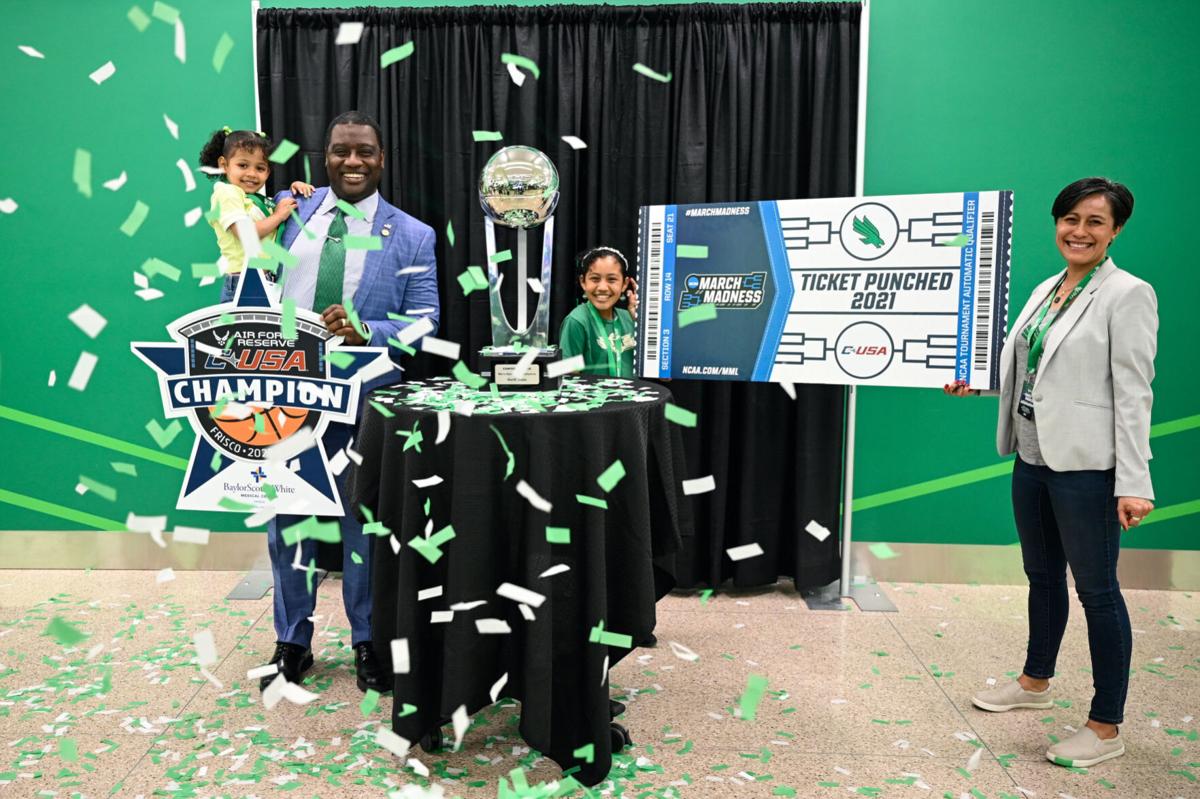 Denton mayor Gerard Hudspeth and his family have fun taking photos with the C-USA trophy during a celebration event at the Super Pit on Thursday. 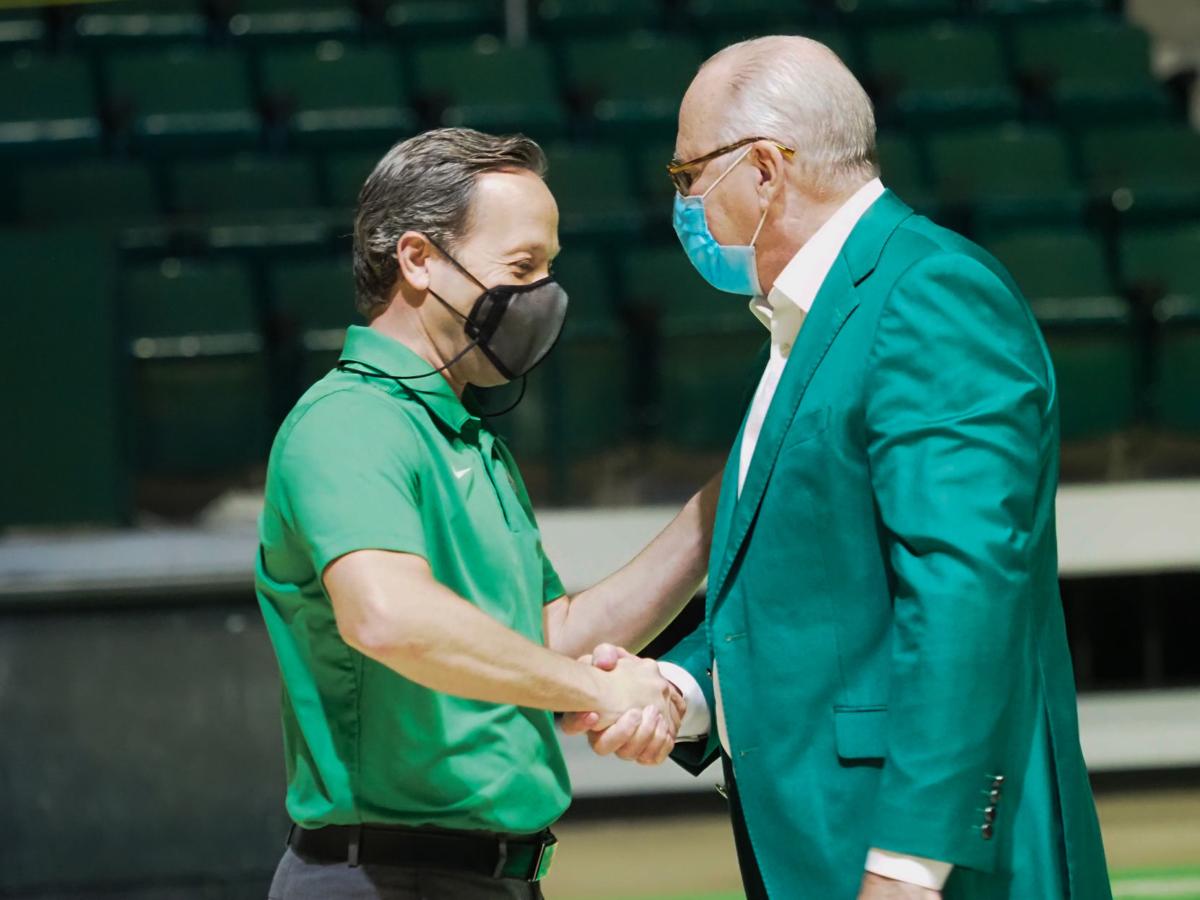 Denton mayor Gerard Hudspeth and his family have fun taking photos with the C-USA trophy during a celebration event at the Super Pit on Thursday.

North Texas took time out to honor one of the landmark achievements in the history of its athletics program on Thursday, when Grant McCasland pointed to an even bigger goal.

UNT’s coach took over a team coming off an eight-win season in the spring of 2017 and guided it to the best campaign in program history this year. The Mean Green won the Conference USA tournament and went on to upset Purdue for the program’s first NCAA tournament win.

Several hundred fans turned out at the Super Pit to honor the Mean Green for reaching that milestone, one McCasland sees as a step toward an even bigger goal.

“We sat in the locker room when we first got here and talked about playing for a national championship,” McCasland said. “That is what we want to do at North Texas. People may laugh about that part of it, but I am dead serious about it. That is what we are striving for.”

McCasland credited his players, the university’s administration, his support staff, fans and just about everyone else for their roles in the Mean Green’s run that sparked interest in the program.

“The Mean Green is a household name now,” UNT president Neal Smatresk said during his time at the microphone during the event. “You made a moment we will never forget.”

The Mean Green became one of the darlings of the NCAA tournament, thanks largely to the compelling storylines surrounding the team.

UNT point guard Javion Hamlet’s father, Louis, was in the stands throughout the Mean Green’s postseason run. He was featured on national television during UNT’s two NCAA tournament games wearing a sweatshirt with Hamlet’s picture on it.

“He didn’t do that to get on TV,” Hamlet said. “It was just about supporting us. It was a dream come true. When I was watching the tournament growing up, they would show the best players’ moms or dads in the stands. I would tell him that would be us some day. For that to come true was a blessing.”

UNT’s program has been the toast of Denton ever since.

Celebrating a memorable season with some of their core supporters was rewarding for UNT’s coaches and players. The entire NCAA tournament was played in Indiana.

A few UNT fans made the trip and saw the Mean Green’s win over Purdue and their loss to Villanova in the second round. Getting a chance to celebrate with a few additional people who watched from home was rewarding for McCasland and his players.

“To be able to give it back to our fans and have them be proud is a good feeling,” UNT forward Zachary Simmons said.

UNT will have a far different team next season. Hamlet and Simmons are both moving on to pursue playing at the pro level. Shooting guard James Reese is in the NCAA transfer portal and could transfer to another program. McCasland said Reese is attracting the attention of nationally prominent programs.

Hamlet said he really didn’t have anything left to accomplish on the college level after he averaged 24.5 points in UNT’s two NCAA tournament games. Simmons also felt like the time had arrived to move on.

“It feels great to go out the way we did,” Simmons said. “I came into an eight-win program my freshman year and have seen the changes that have been made. There is a championship culture and mentality in the program now. It’s amazing.”

UNT will have a few key players returning next season, including Thomas Bell. The senior forward elected to take advantage of the NCAA’s decision to grant players an additional season of eligibility due to the COVID-19 pandemic.

“We have the winning formula,” Bell said. “Why not stay here and get better, better myself and do it again?”

UNT’s underclassmen are excited about the prospect of building on what the program has accomplished under McCasland. The Mean Green won the regular season C-USA title last season before coming back to win the conference tournament and an NCAA tournament game this year.

“Those guys set the bar very high for next year,” UNT junior guard Mardrez McBride said, “I’m very excited. We can’t let them down. We have to turn it up some more.”

UNT took time out to celebrate another step in the program’s climb on Thursday, when McCasland pointed to the ultimate goal of winning a national title.

“This is what we talked about all year long, winning the Conference USA tournament and winning in the NCAA tournament,” Hamlet said. “It feels great to be the best team in North Texas history.”