NORTH RICHLAND HILLS — Guyer coach John Walsh and Braswell coach Cody Moore have known for the past few months that their teams could easily end up in the same district come realignment.

With the Bengals slated to move up from Class 5A to Class 6A, the only remaining question was if the UIL would sort the two schools into the same district.

On Monday morning at Birdville ISD’s Fine Arts and Athletics Complex, Walsh and Moore got their answer.

When the UIL released its new districts at 9 a.m., Guyer and Braswell found themselves in District 5-6A — meaning the Bengals and Wildcats will play each other for the first time later this fall.

“We’re excited to be back playing someone from Denton ISD and maybe creating a rivalry,” Walsh said. “Cody has done a great job out there.”

Braswell is coming off its most successful season in school history. The Bengals went 9-3 in 2019, winning their first playoff game to go along with winning a share of their first district title.

“I think it will be fun,” said Moore of the matchup. “I like John a lot. They do a great job, obviously. They’re really, really good. It will be a great challenge for us.”

The district also features some of the newest and most elaborate stadiums in the state. Allen’s Eagle Stadium, which opened in 2012, cost roughly $60 million.

Prosper ISD’s Children’s Health Stadium opened in 2019 and was a $48 million project. McKinney ISD Stadium is the most expensive of the three, opening in 2018 with a price tag of $69.9 million.

C.H. Collins Athletic Complex, which is home to Guyer and Braswell, opened in 2004 and cost $23 million.

“The good news is we are going to play in four of the nicest stadiums in the state,” Walsh said. “They’re all good venues, including ours.”

The only hiccup in the realignment process came with Allen being placed in Guyer’s district. The two teams had already agreed to play one another in Week 1 in the Tom Landry Classic.

Because of this, the Wildcats were forced to shuffle their nondistrict schedule. Guyer will now play Hebron in Week 1, Aledo in Week 2 and Mansfield Lake Ridge in Week 3.

Walsh said the Wildcats do not have an opponent on the schedule for Week 4 yet.

As for Braswell, the Bengals’ nondistrict lineup includes Mesquite Horn in Week 1, Keller in Week 2, Sachse in Week 3 and Haslet Eaton in Week 4.

“Either way we went, 6A football in the metroplex, it is what it is,” Moore said. “Everybody is good and everybody is well-coached. We’re excited for the challenge and are looking forward to it.” 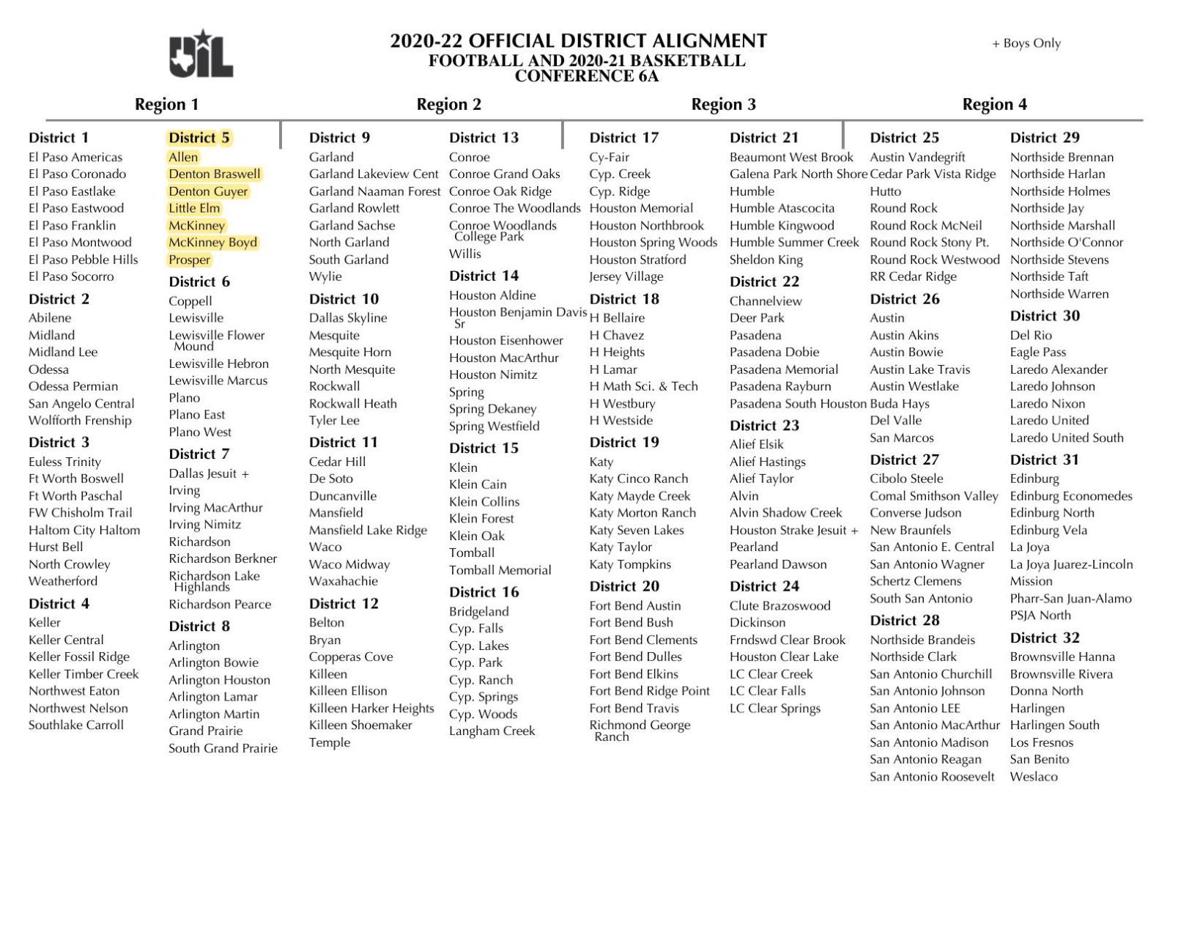