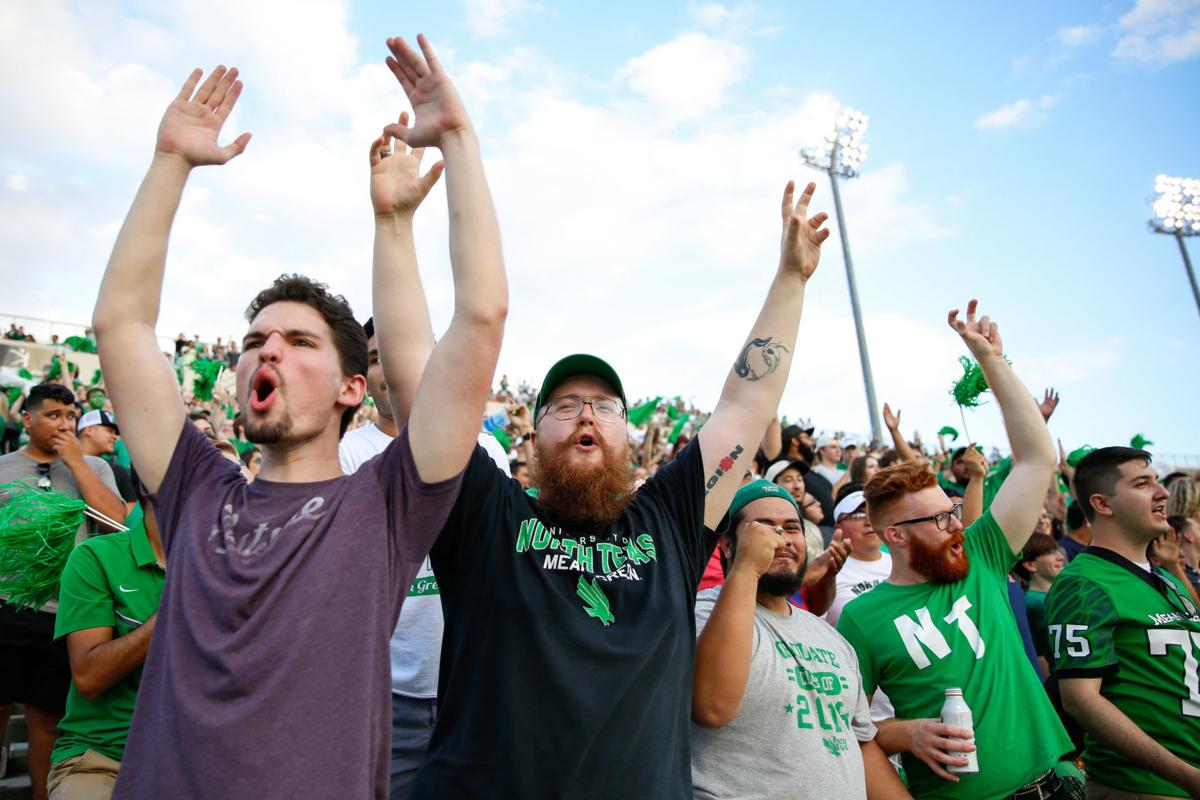 North Texas fans cheer on the Mean Green during a game at Apogee Stadium last fall. UNT officials are finding new ways to connect with fans during the shutdown in college athletics caused by the spread of the coronavirus and are using that information to formulate plans for a potential college football season this year.

The world of college sports had already screeched to a halt due to the spread of the coronavirus this spring when longtime North Texas booster Curtis Clinesmith received a message from a member of the athletic department’s development staff.

“He wanted to set up a time for a call to talk about what is going on with the program,” Clinesmith said. “The athletic department wants to keep us updated. I appreciate that.”

Schools across the country are searching for ways to deal with unprecedented times in college athletics due to the pandemic. College sports were called off in mid-March, when day-to-day life in America changed dramatically.

UNT quickly adjusted its approach to interacting with fans and boosters at that time. The program’s focus now isn’t raising money. It’s reaching out to core supporters, providing updates on where the program stands and gathering information on how fans feel about potentially attending games this fall.

The school sent out a questionnaire to members of the Mean Green Scholarship Fund this month to gather their input on a host of issues.

“We are still receiving support from many generous donors but understand some of our supporters are also experiencing financial difficultly,” UNT athletic director Wren Baker said in an email this week. “Our emphasis right now is on touch points and gratitude.”

UNT officials normally meet with fans during a coaches’ caravan at this time of year. Football coach Seth Littrell and other head coaches speak about the upcoming season at stops in multiple cities across the state annually.

UNT made stops in three cities in the first week in June last year.

School officials called off the 2020 caravan in late April and said they would shift the event to an online format. UNT has yet to announce a timeline for those web-based events but has reached out to donors and fans in other ways.

Baker mentioned during a teleconference just days into the shutdown that UNT’s coaches were given a list of donors to contact.

Clinesmith didn’t talk to any of UNT’s coaches but was happy to hear from school officials.

“What they’re doing is important,” Clinesmith said. “There is so much uncertainty now.”

The NCAA provided some clarity last week when it announced that athletes will be allowed to return to campuses for voluntary workouts beginning June 1.

Baker said UNT is working through a series of issues in conjunction with the university to arrive at a plan for athletes returning to campus and resuming practice. Reaching that goal will be a key step in preparing for football season.

The timing of that campaign and how schools will adhere to social distancing in stadiums are questions that have to be answered.

UNT asked members of the Mean Green Club to provide information that will help it formulate a plan through its questionnaire.

“We are working through scenarios, compiling data and researching best practices in preparation to get back to sports,” an email that accompanied UNT’s questionnaire read. “During this process we want to be sensitive to the needs and concerns of our donors.”

UNT asked fans if they would come back to Apogee Stadium for football games and if they would be willing to wear a mask at games, according to Allen Powell, a UNT graduate and booster who filled out the survey.

Like Clinesmith, Powell said he appreciates the effort UNT officials are making to stay in contact with fans when there are no games or events to attend.

Powell plans on coming back to games and indicated his intentions on the survey.

“I have my season tickets and will have my scholarship fund commitment paid for or will in the next month,” Powell said. “My philosophy with the virus is that you could also die on the way to the game in a car wreck.”

UNT officials are hoping that by the fall, it will have a plan in place that will help the rest of its fans feel comfortable attending games at Apogee. They are giving those fans plenty of extra time to pay for their tickets and the scholarship fund donation required to purchase them.

The deadline of April 24 was pushed back to June 30.

Baker has been pleased with the results.

“Generally speaking, our Mean Green Scholarship Fund is tracking well,” Baker said. “There is a lag because we pushed back the dates but not too much.”