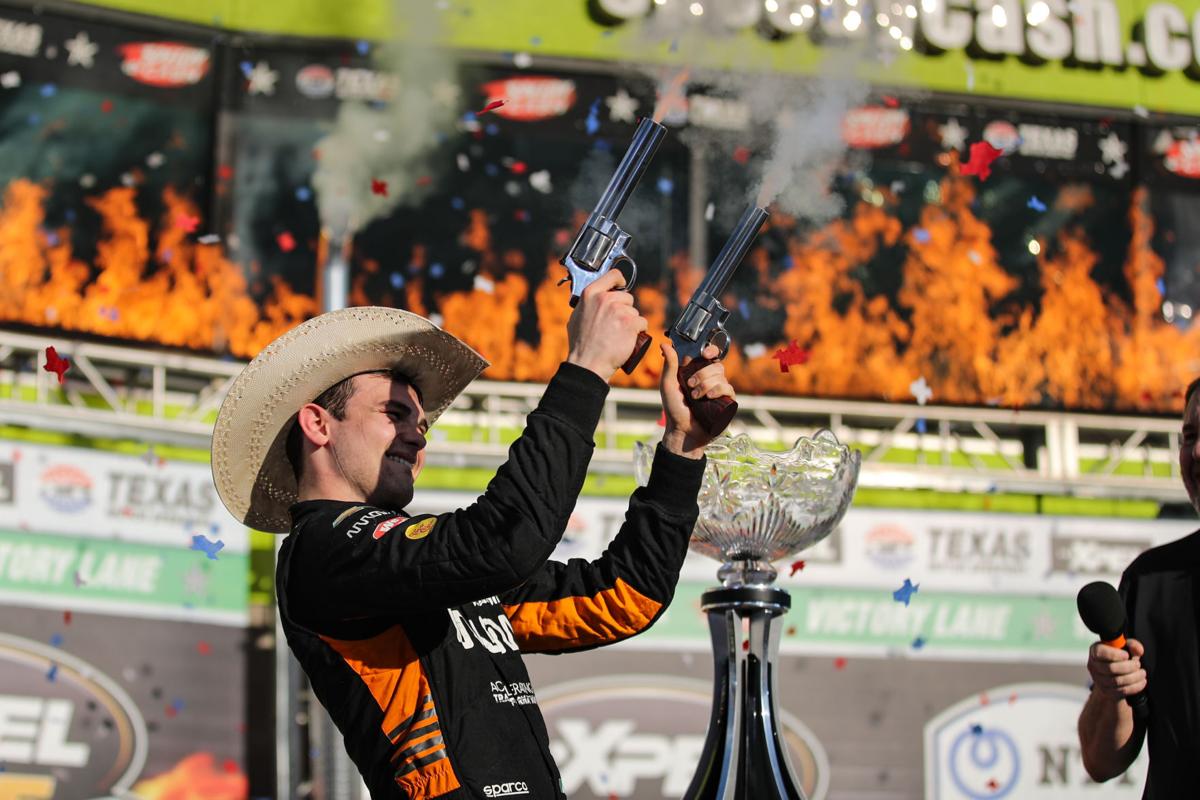 Pato O’Ward celebrates after winning the XPEL 375 on Sunday at Texas Motor Speedway in Fort Worth. 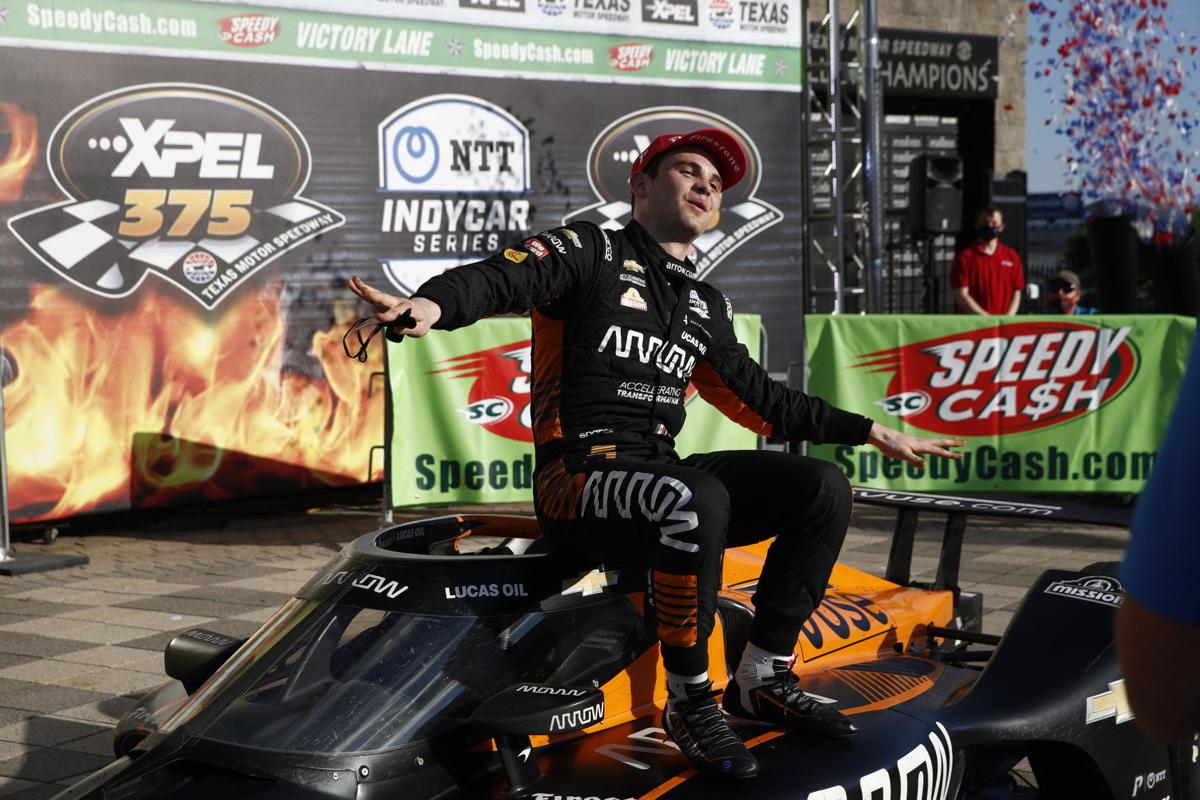 Pato O’Ward celebrates after winning the XPEL 375 on Sunday at Texas Motor Speedway in Fort Worth.

FORT WORTH — Veterans Scott Dixon and Graham Rahal were battling to add to their Texas Motor Speedway win totals, but Pato O’Ward had other ideas.

The 21-year-old Mexican jumped past Dixon and Rahal on a cycle of pit stops, then outdueled two-time NTT IndyCar Series champion Josef Newgarden after the final restart to score his first career victory Sunday in the XPEL 375.

“It’s Texas. It’s very close to my heart. I’ve lived here for many years,” O’Ward said in victory lane. “Many Mexicans were out there in the grandstands, so thank you guys so much. So happy, man — finally!

“Oh, yes, my birthday is in like four days or something.”

O’Ward followed a victorious Dixon to the finish Saturday night in the weekend’s doubleheader opener for his first podium of the season and found himself stalking Dixon and a rival once again Sunday.

When leaders Dixon and Rahal made their final pit stops with just over 60 laps remaining, O’Ward stayed out for one more unobstructed sprint around the 1 1/2-mile oval. O’Ward emerged from his stop just in front of Rahal and looked to be in command of the fight for victory.

For the restart, two-time Indianapolis 500 winner Takuma Sato was the leader but had yet to stop for fuel. Newgarden was second after making an earlier stop, followed by O’Ward, Rahal and Dixon.

With Sato eventually out of the way, O’Ward’s No. 5 Chevrolet caught Newgarden with 24 laps remaining. O’Ward challenged the Team Penske Chevrolet entering Turn 1, setting up a run down the backstretch and a pass to the inside in Turn 3.

From there, O’Ward quickly pulled away to a lead of nearly a second. The final margin was 1.2 seconds back to Newgarden, with Rahal, Dixon and Colton Herta rounding out the top five.

“When they turned me loose, I said let’s just go for it,” O’Ward said. “I knew if we got in clean air we could run away with the thing. We had so much pace. It’s just so, so tough to pass.”

O’Ward said he moved from Mexico to San Antonio when he was 11, then moved to Indianapolis a year ago.

“I don’t know what it was,” Newgarden said. “It seemed like his Chevy was a little better than my Chevy for some reason.

“I didn’t have the speed at the end.”

Six cars were out of the race — one of them upside down — before they even reached the start line. As the initial green flag waved over pole-sitter Dixon, a midpack accordion effect saw Pietro Fittipaldi run into the back of four-time champion Sebastien Bourdais, eventually collecting five other cars and sending Conor Daly sliding down the frontstretch on his lid.

Daly’s car was righted after digging into the infield grass, and he was joined in early retirement by Fittipaldi, Alexander Rossi, Ed Jones and both A.J. Foyt Racing drivers — Bourdais and Dalton Kellett. Tony Kanaan was involved but managed to continue.

The crash completed a frustrating weekend in its home state for the Waller-based Foyt team. Bourdais was also run over from behind in Saturday night’s Genesys 300 and finished last — 24th — while Kellett finished 18th as the last car on the lead lap. On Sunday it was Bourdais 19th and Kellett 23rd.

“The guys had worked until midnight to fix the car from last night after Josef took us out and then we can’t even take the green flag,” Bourdais said. “Not quite sure what to say, but I’m not very impressed right now.”

Dixon extended his championship lead to 22 points, and O’Ward jumped up to second. Alex Palou dropped to third place, four points behind O’Ward and 11 ahead of Newgarden.

Dixon remains on 51 victories, one behind Mario Andretti for second on the career list. He led 163 of the 248 laps Sunday to reach a total of 1,043 career laps led at TMS.

Rookie Scott McLaughlin, who made his first career oval start Saturday and thrilled with a runner-up finish, posted another top-10 Sunday in eighth.

O’Ward is the first Mexican to win an Indy car race since 11-race winner Adrian Fernandez prevailed three times in 2004.

“It’s very special to me to represent my country,” O’Ward said. “I don’t think there’s anything better than putting your flag as high as you can.”

MATT CRIDER may be reached via Twitter at @countryMCdenton.