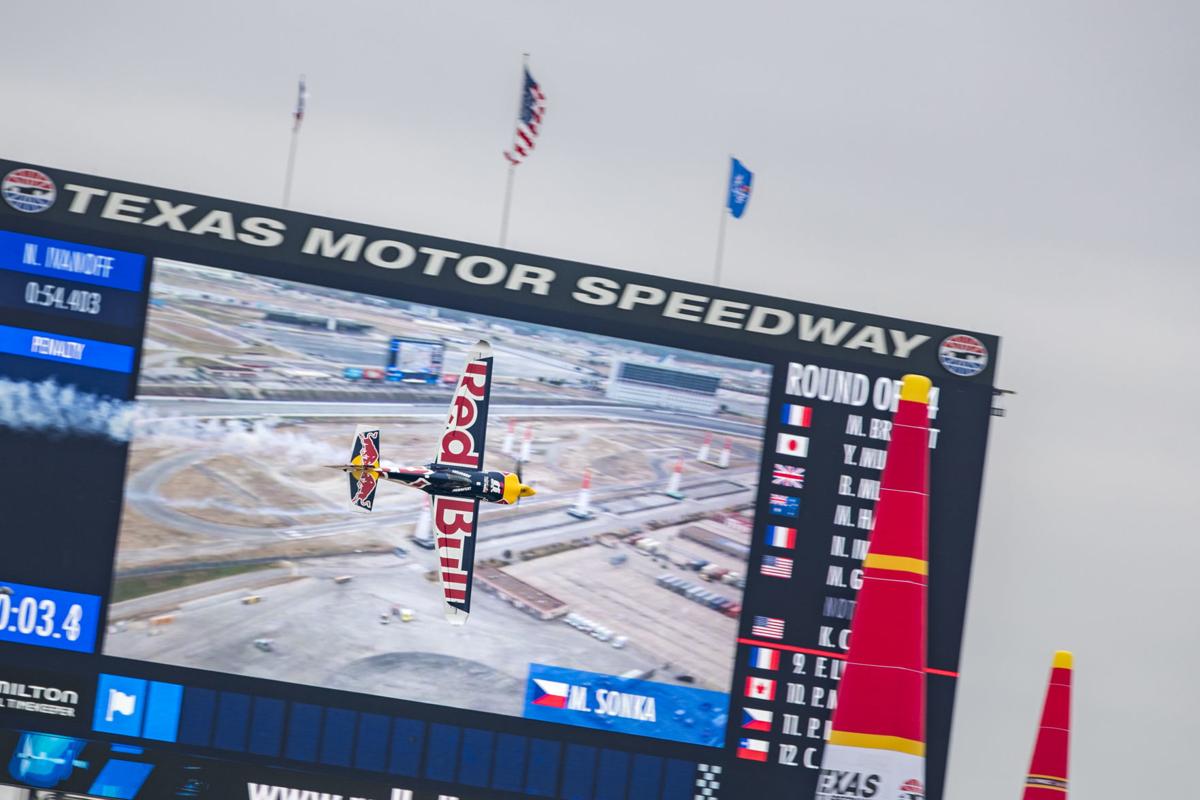 Martin Sonka, of the Czech Republic, races to the Red Bull Air Race season championship during the final round Sunday at Texas Motor Speedway in Fort Worth. Sonka won the race, which was Round 8 of 2018, and beat Matt Hall, of Australia, for the title. 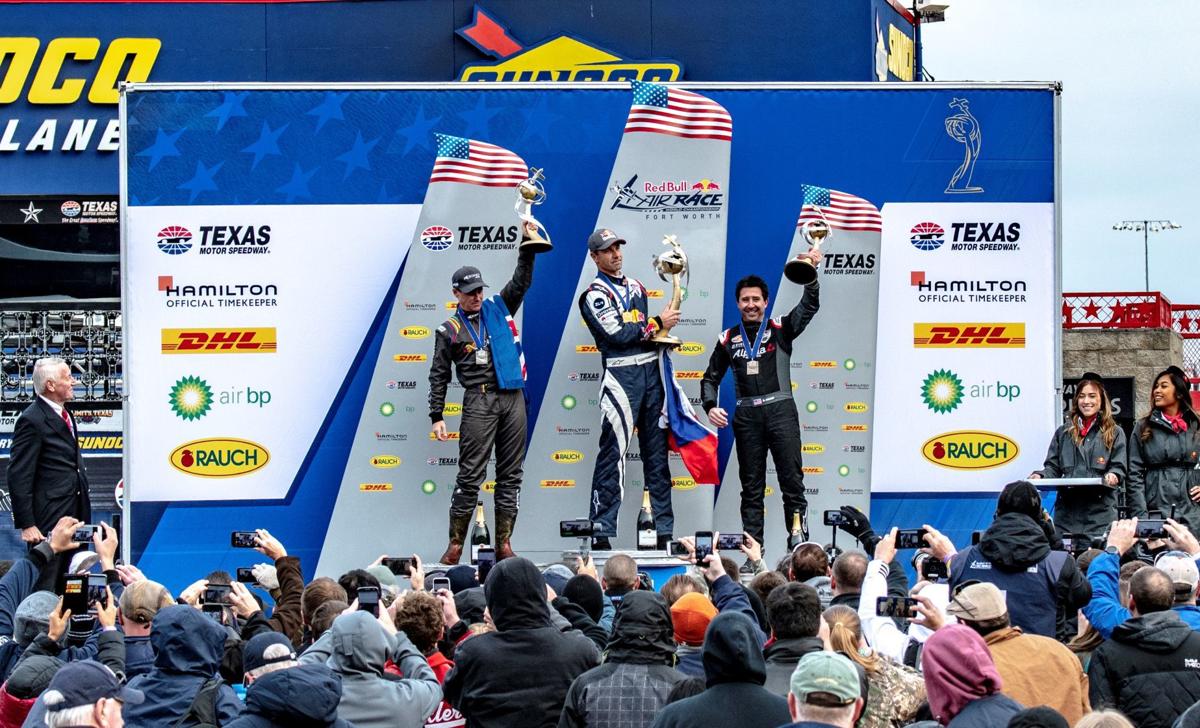 Martin Sonka, of the Czech Republic, races to the Red Bull Air Race season championship during the final round Sunday at Texas Motor Speedway in Fort Worth. Sonka won the race, which was Round 8 of 2018, and beat Matt Hall, of Australia, for the title.

FORT WORTH — For a racing series that likes things to go down to the last minute, this was the ideal finish.

Martin Sonka, of the Czech Republic, beat rival Matt Hall by three-tenths of a second on the final run of the season to capture the 2018 Red Bull Air Race championship, winning Sunday’s race at Texas Motor Speedway and the world title in the process.

Hall made the penultimate run of the year, clocking a time of 53.100 seconds on the two-lap course over the Denton County stadium. That put the Australian in the race lead and left it to Sonka’s run to determine which of the pair would be world champion.

Sonka was nearly two-tenths ahead after half a lap and extended his lead to 0.33 seconds after one circuit. He maintained that edge over the last lap and collected his first championship in 52.796.

“The very last flight of the day — of the season, actually,” Sonka said. “We just grabbed it and we are the world champions.”

The racers enter the speedway from the north through a pair of inflatable, 82-foot pylons at the exit of the 1 1/2-mile oval’s Turn 3. They weave around three single pylons and through a twin-pylon gate in the middle of the infield, then take a gate at the entrance of Turn 2, between the two towers at the south end of the speedway.

“I’m still kind of sorting out my emotions,” Hall said. “I pushed it as hard as I could without risking penalty. I would rather finish second with a clean run than second with a penalty.”

Kirby Chambliss, of Corpus Christi, finished third in a time of 54.064, adding to his podium finishes this year in Abu Dhabi, United Arab Emirates; and Kazan, Russia. Rookie Ben Murphy, of Great Britain, was fourth at 54.176.

The win was Sonka’s fourth of the year and the sixth of his career. Before Sunday’s Round 8, the former Czech air force fighter pilot won Rounds 4-6 in Budapest, Hungary; Kazan; and Wiener Neustadt, Austria.

“We were here fully focused, fully concentrated, ready for the race,” Sonka said. “Hearing [Hall’s] time, I just knew I had to push hard.”

Series officials did not even announce Fort Worth as the site of the finale until late in the season. It marked the third time the planes have raced at TMS, and a return to his home state for Chambliss.

“I’m happy to race in Texas,” Chambliss said. “I had a lot of family and friends here, so it was a great experience.”

In Sunday’s first round, the 14 pilots in the elite Master Class faced off in head-to-head heat races.

Chambliss was leading Mika Brageot of France after 1 1/2 laps but lost time on his second vertical turn. Brageot clocked a 53.152, topping the Texan by 0.11 seconds. Chambliss joined the seven heat winners in the round of eight because he was the fastest loser.

Brageot was the only pilot flying a low-wing MXS-R. All other Master Class pilots this season flew versions of the mid-wing Zivko Edge 540, which is built in Guthrie, Oklahoma.

In other first-round action, Hall advanced after Pete McLeod hit a pylon. Points leader Michael Goulian of Massachusetts was trailing after half a lap, but Cristian Bolton took three penalties — too many G’s and not level through two gates. Sonka posted a speedy 52.764 even after learning Nicolas Ivanoff had a penalty for exceeding the speed limit of 180 knots entering the track.

In the head-to-head second round, Goulian took himself out of title contention with a pair of two-second penalties — not level through Gate 7, which completes the first lap, and too low through the southernmost Gate 11. Sonka flew a 53.031 to advance.

Hall beat Juan Velarde, who failed to fly level through Gate 7. Chambliss turned in a time of 51.984, beating the track record and Yoshi Muroya, who wasn’t as tight and swift as Chambliss through the first vertical turn.

“We struggled to try to get into the groove and just get faster and faster,” Chambliss said. “We stepped it up big-time in the round of eight.”

The four heat winners in the second round then took individual time trials to determine the race winner and, ultimately, the championship.

In the second-tier Challenger Class, Luke Czepiela, of Poland, won the race and the championship. German Florian Berger finished second by 0.05 seconds and dropped into a tie with Czepiela on points. Officials went deep into the tiebreaker process, and Czepiela took the title based on a better finish earlier in the season. … Other stops on the circuit this season were Cannes, France; Chiba, Japan; and Indianapolis Motor Speedway.