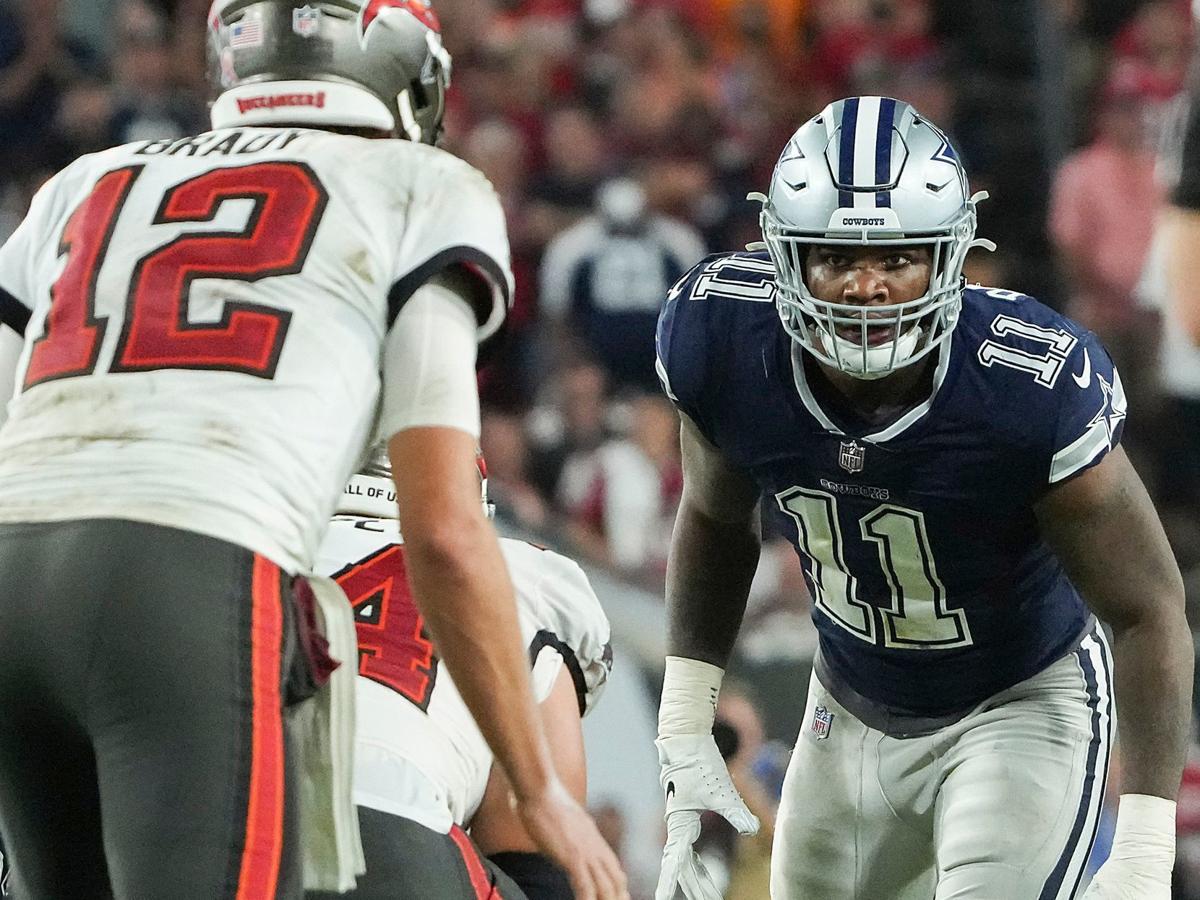 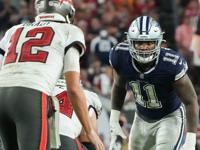 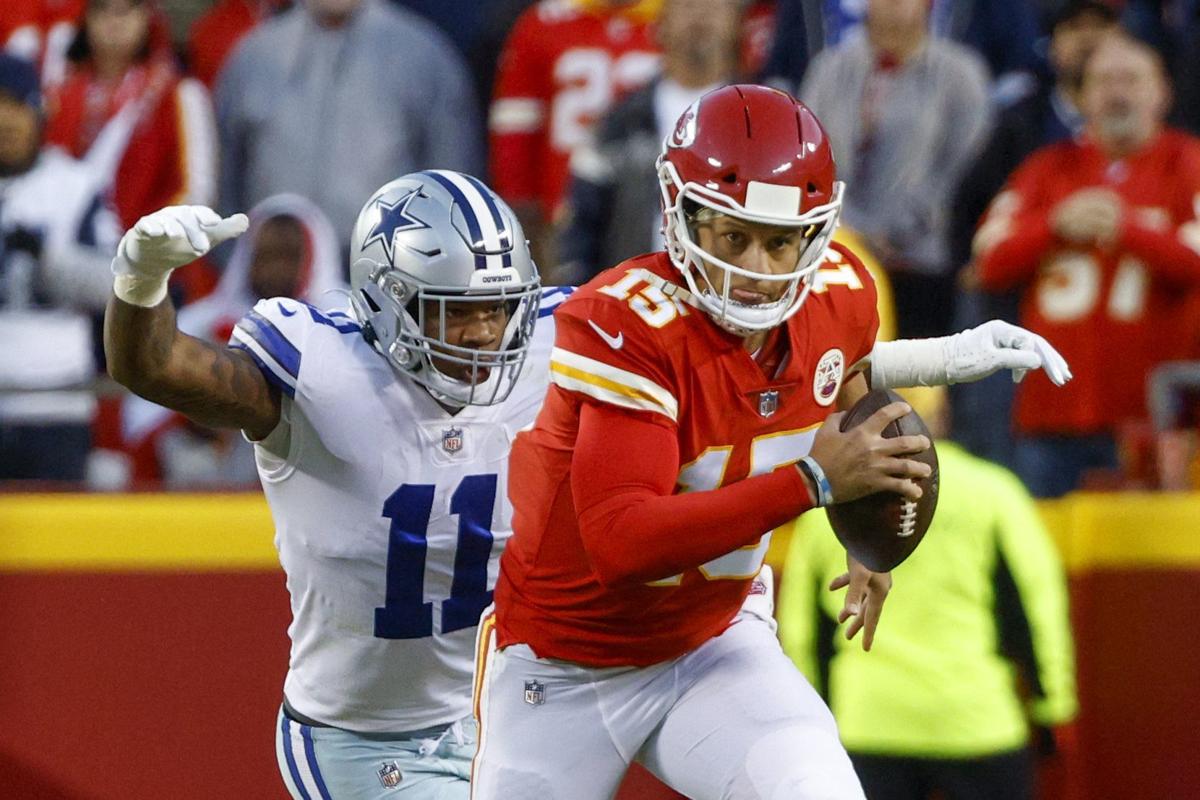 FRISCO — Cowboys rookie Micah Parsons was a Penn State freshman, he believes, when first watching an interview of Kobe Bryant discussing his workout routine. The concept was simple: The earlier the late basketball legend started, the more work he could fit into a day, and the greater separation from other athletes he could create over time.

That stuck with Parsons.

In mid-October, Dallas carried a five-game win streak into its bye week. Parsons helped propel the surge, fluidly switching from inside linebacker to full-time defensive end those first two games. His case for Associated Press Defensive Rookie of the Year already seemed made.

But he was not satisfied.

A lion can learn from a Black Mamba.

“Just the standards I have for myself,” Parsons said in a recent phone interview. “I was having an OK season, but I wasn’t separating myself from other guys in the league. I said, ‘If I’m really going to do this thing, I’ve got to separate myself and do something else.’”

In the football jungle, Parsons is a rare breed, providing the Cowboys incomparable versatility on their path to the playoffs. There is much he has done and yet still more left to do. His focus is on the latter, the next chapter coming Sunday in the wild-card round against the San Francisco 49ers.

Parsons played his best football in the 10 games after the bye, often waking up at 5 a.m. to train and do more preventative body maintenance. He missed Saturday’s regular-season finale to COVID-19 but will resume practice as early as Wednesday.

It is difficult to convey Parsons’ full impact as a rookie.

Traditional statistics capture only so much. Even his position, linebacker, is too simplistic and antiquated, not encapsulating all his alignments and roles. The former Penn State Nittany Lion, who registered “the lion is always hungry” as a trademark in December, chuckled at a suggestion for his position name: lionbacker.

Several established members of the NFL community, each of whom possess a far-reaching frame of reference and have seen Parsons play multiple NFL games, offered their perspective on what Parsons has done.

A couple weeks ago, the lionbacker stood a realistic, if outside, chance to join Pro Football Hall of Fame linebacker Lawrence Taylor as the only rookies in NFL history to be named AP Defensive Player of the Year. That was before Parsons missed a game, Pittsburgh Steelers linebacker T.J. Watt made history and the Steelers dramatically reached the playoffs.

Still, experts agree, there is no matching the range of Parson’s contributions.

His versatility is considered one of one.

Norv Turner won two Super Bowls in three years as the Cowboys’ offensive coordinator in the early 1990s. He spent 13 seasons as an NFL head coach and 35 total in the league, scheming against various venerable defenders.

Ask him about Parsons.

Brian Baldinger was an NFL offensive lineman for 11 seasons, beginning in Dallas from 1982 to 1987. Today, he studies and analyzes the entire league for NFL Network, including every snap Parsons has played since his Aug. 5 exhibition debut.

Ask him about Parsons.

“I don’t even know what the comp is,” Baldinger said. “You always try to draw a [comparison] in this business. I’ve never seen a player who has this versatility to him.”

It’s not just that Parsons can line up at inside linebacker on one play, follow a running back into the slot or boundary like a cornerback on the next, and rush from defensive end or outside linebacker the play after that. It’s his effectiveness when doing each.

He slices past blockers suddenly, his understanding of hand placement and leverage deriving from his childhood background as a national champion wrestler. His closing speed cuts down quarterbacks, running backs and receivers alike. Football instincts allow him to play faster yet.

“I feel like every time I’m out there, I’m the most impactful player out there,” Parsons said. “I feel like I can do almost anything that anyone can do out there on the field. Anything. I want to be one of those players where they got to know where I’m at. That’s why I would say stats don’t always tell the story.”

Only some of it.

Between Weeks 8 and 17, upon summoning the Black Mamba and attacking his days earlier and with greater intention, Parsons ranked third in the NFL with 10 1/2 sacks, fifth with 45 quarterback pressures, first with 17 tackles for loss and first with eight pressures that forced a throwaway, all despite his 195 pass-rush attempts in the span ranking 106th in the NFL, according to Pro Football Focus.

For the entire regular season, Parsons finished sixth in sacks (13), ninth in quarterback pressures (67), third in tackles for loss (20) and second in forced throwaways (nine) while his 307 pass-rush attempts were 118th.

The eight players who totaled more quarterback pressures than Parsons in 2021 combined for 173 snaps in coverage. Parsons dropped into coverage 284 times, not allowing a single touchdown on 35 targets.

In the past 15 years, only three players have recorded at least 80 tackles and 30 quarterback hits in the same season: J.J. Watt (twice), DeMarcus Ware and Parsons. The 22-year-old Parsons did so after opting out of his 2020 junior season.

“There is nobody like me,” Parsons said. “I feel like you can easily find a good pass rusher. Look at Myles Garrett. Look at T.J. Watt. But you can’t put them against any running back in the NFL. You can get a good linebacker. He can cover. Look at Eric Kendricks, Fred Warner. They can cover, but they can’t pass rush like I can. I don’t see them guard receivers like I can. Really, the tape speaks for itself.”

Despite how Cowboys coordinator Dan Quinn designed a much-improved Dallas defense around Parsons’ talents, there is no indication Parsons is being seriously considered for Defensive Player of the Year in favor of Watt, even if a strong argument can be made.

Fifty voters are submitting their Associated Press end-of-year award ballots for honors that include Defensive Rookie of the Year, Defensive Player of the Year and All-Pro teams. Rick Gosselin, a longtime Dallas Morning News sportswriter, has been part of the AP’s selection committee as well as a leading voice in the Pro Football Hall of Fame induction process for decades.

He finds no historical parallel to Parsons’ versatility.

He believes that trait and the stress it creates on offenses matters.

“It influences my vote, but not every voter has seen the Cowboys or seen Parsons play,” Gosselin said. “They may have heard about him, but I don’t think they have seen him like I have, playing different positions. I think a lot of times when people give out these awards, you look at, ‘Well, who’s got the interceptions? Who’s got the sacks? Who’s got the forced fumbles and such?’

“Versatility is passed over for a particular, glowing stat, and I think that’s the thing that can hurt Parsons.”

Charles Haley has been watching.

The Pro Football Hall of Fame edge defender, who split his 13-year NFL career and five Super Bowl rings between the Cowboys and 49ers, is impressed with what Parsons has shown in his first NFL season.

How instinctive he is.

“I see his love of the game just flowing through his body,” Haley said. “I love the game of football. I like those who love the game, too. … He is all the billing. Whatever he is billed up to be, he is that and more.”

If Haley has one concern, other than feeling Parsons is too good of a pass rusher not to rush more often, it is not about Parsons personally but any young player who experiences great success. Some can grow comfortable. They can work less hard.

With his bye week adjustment, Parsons revealed his mental makeup there.

“I’ve never been complacent a day in my life,” Parsons said.

Parsons regularly watches motivational videos. Before games, he is on YouTube, listening to Mike Tyson discuss fear before he climbs into the ring and becomes a monster. Last week, two days before the COVID-19 diagnosis, Parsons acknowledged that winning Defensive Player of the Year would be meaningful.

His next statement was that it would only make him hungrier.

He’d feel compelled to go out and do it again.

“I just look at it like I’m just getting started,” Parsons said. “This is just the warmup. This is just the preview. This is just Year 1. I really haven’t tapped into what I am fully capable of yet. I don’t even consider this a great year. I think I am having a good year. You know?

In 2009, the Black Mamba sat at a postgame news conference during the NBA Finals. The Los Angeles Lakers has just taken a 2-0 lead in the series against the Orlando Magic.

A deadpan Bryant rolled his eyes when a reporter asked why he didn’t look happy.

“What’s there to be happy about?” Bryant said, shrugging his shoulders. “The job’s not finished. Is the job finished? I don’t think so.”

Parsons can relate, the lionbacker dissatisfied before the first playoff game of his first NFL season.

He sees too much meat on the bone.