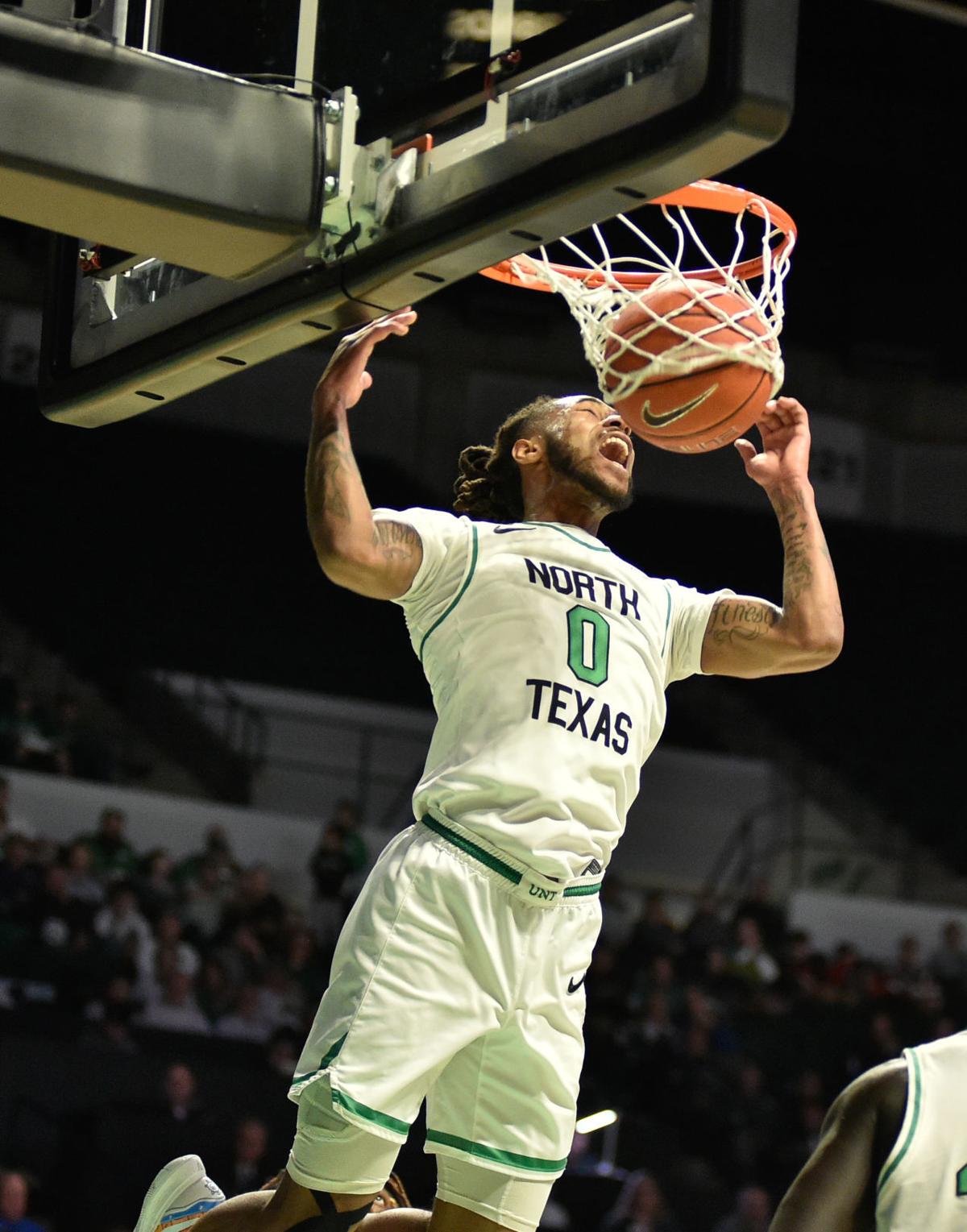 North Texas guard James Reese (0) finishes off a dunk during a game at the Super Pit earlier this season. UNT will host Western Kentucky on Sunday and can clinch the Conference USA regular season title with a win.

Zachary Simmons never doubted North Texas could work its way into the situation it finds itself in heading into its game against Western Kentucky on Sunday.

The junior forward felt like the Mean Green had everything it takes to win a conference title.

It turns out, Simmons was right.

The challenge now for UNT is finishing the deal.

All that stands in the Mean Green’s way are the Hilltoppers, their old nemesis, who have spoiled plenty of nights for UNT through the years.

“This is a big opportunity,” Simmons said. “We came here to put banners up. We knew we could compete at that level.”

UNT has plenty of banners hanging in the Super Pit. The last were hoisted after the 2009-10 season. The Mean Green won the Sun Belt Conference West Division title, finished in a tie atop the league’s overall standings and won the conference tournament on their way to playing in the NCAA tournament for just the third time in program history. One has to go back even farther to find UNT’s last outright regular season title.

That came in 1988-89 when UNT won the regular season title in the Southland Conference.

The question now is if this season’s edition of the Mean Green can etch their name in program history by winning the biggest regular season game in recent UNT history.

UNT (19-10, 13-3 C-USA) has a one-game lead on the Hilltoppers, who handed the Mean Green one of their toughest losses in C-USA play in both teams’ conference opener. UNT had a 15-point lead in the second half before the Hilltoppers stormed back for a 93-84 win.

The Mean Green have lost just two conference games since and can shake the Hilltoppers for good when it comes to this season’s C-USA race in the rematch.

UNT knows that will be easier said than done. It always is.

Western Kentucky has beaten UNT 11 straight times and ended the Mean Green’s season last year with a 67-51 blowout win in the C-USA tournament. They also beat UNT in the Sun Belt tournament final in 2012 with an NCAA tournament bid on the line.

What has their attention is the Hilltoppers’ considerable talent level. WKU lost star center Charles Bassey early in the season to a broken leg but has kept on winning anyway.

“They have a maturity to the way they play the game,” McCasland said. “They have freshmen who contribute, but their core guys have a lot of experience and are savvy.”

That experience showed on Thursday, when the Hilltoppers rallied from a 12-point deficit with 2:02 left to knock off Louisiana Tech 95-91 in overtime.

Taveion Hollingsworth scored a career-high 43 points in WKU’s win over Louisiana Tech and hit a 3 in the closing seconds of regulation to send the game into overtime. The junior guard was a preseason All-C-USA selection and was one of the big reasons the Hilltoppers were picked to win the conference in the league’s preseason poll. He’s averaging 16.3 points per game.

UNT picked up a big win of its own earlier in the night when it rolled past Florida International 78-59 behind 23 points from Umoja Gibson. The sophomore guard leads UNT with an average of 14.9 points per game.

Javion Hamlet has also played better of late, scoring at least 25 points in two of his last three games and is averaging 14.2 points per game.

UNT officials are pulling out all the stops to try to draw a big crowd to the Super Pit for an unusual Sunday afternoon game, including discounting tickets to $10.

UNT’s players are well award of the opportunity in front of them heading into Sunday’s game.

“We’re really just trying to get ready,” Hamlet said. “We’re trying to not get too hyped and focus on getting better.”

UNT believes following that approach will put it on course to claim the C-USA title.

“The biggest thing for us is: Do we stay committed to what made us successful all year long?” McCasland said. “We have to keep doing what got us to this point and not feel like we have to do any extra.”