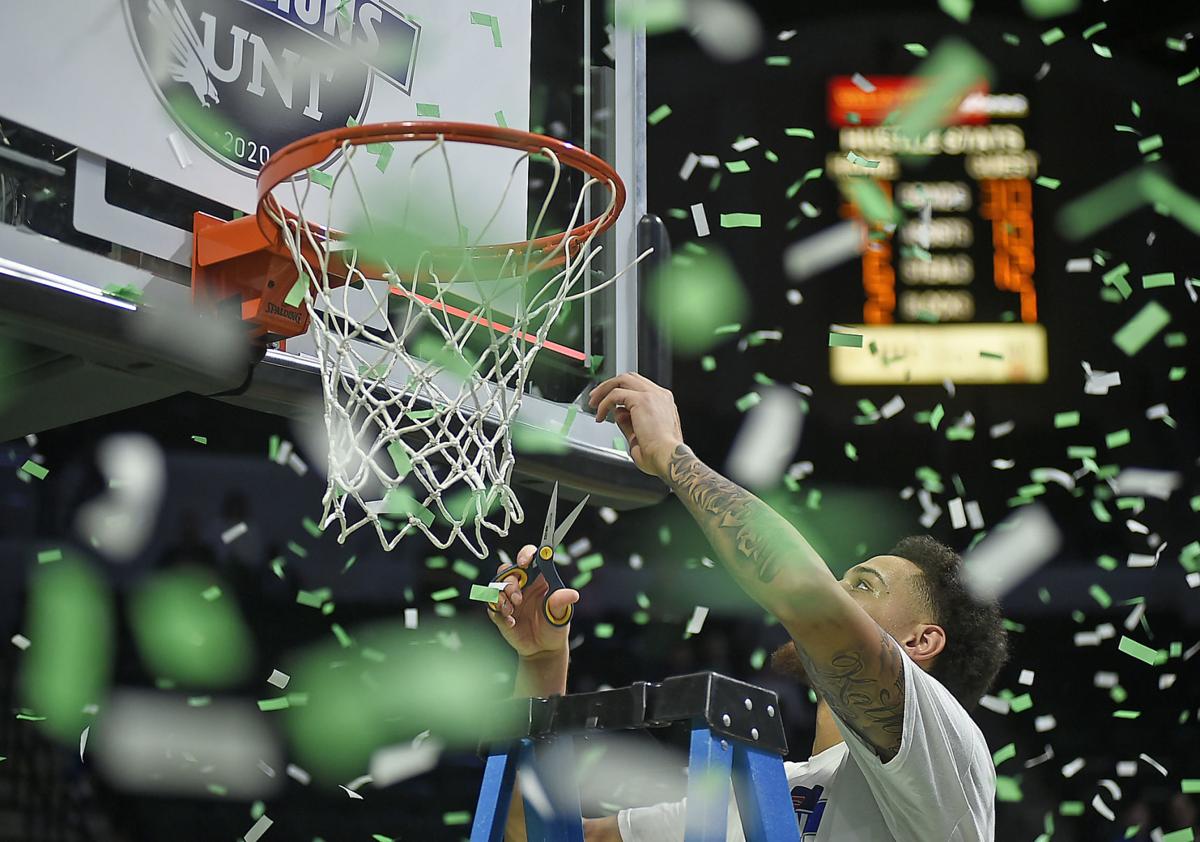 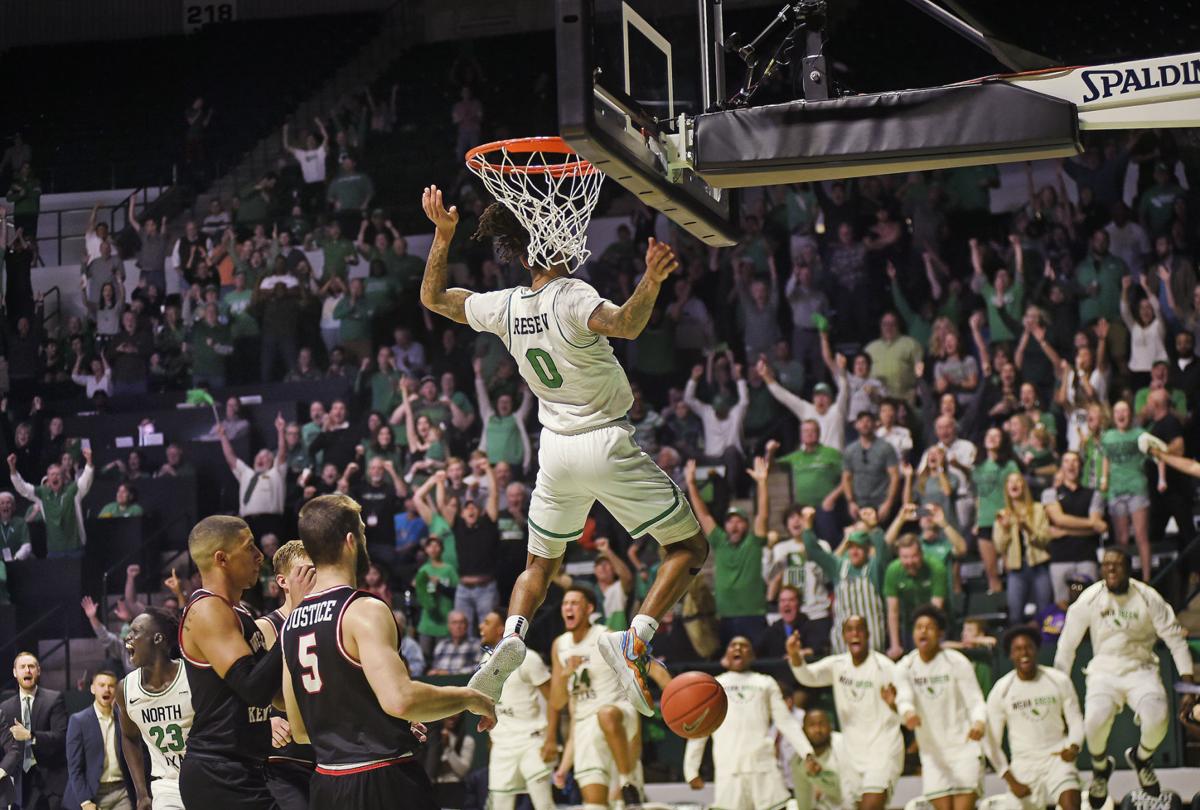 North Texas guard James Reese releases from the basket after a thunderous dunk to put UNT ahead for good. Teammates and the crowd in the Super Pit go wild as North Texas beats Western Kentucky in overtime 78-72 Sunday to win the Conference USA title. 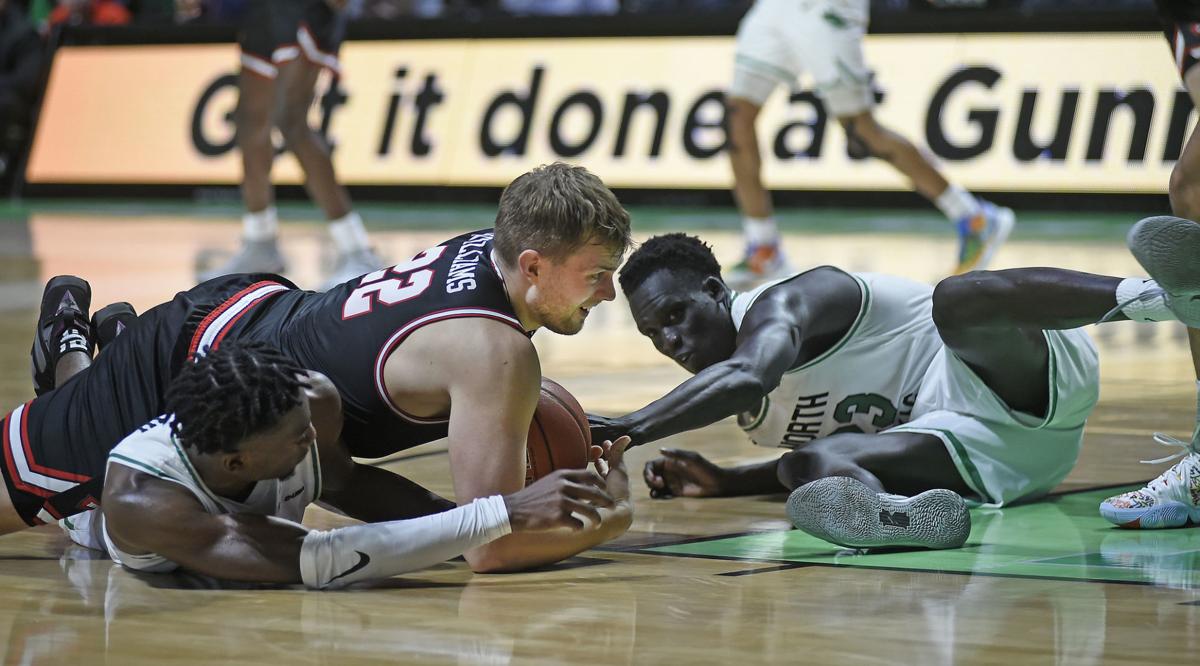 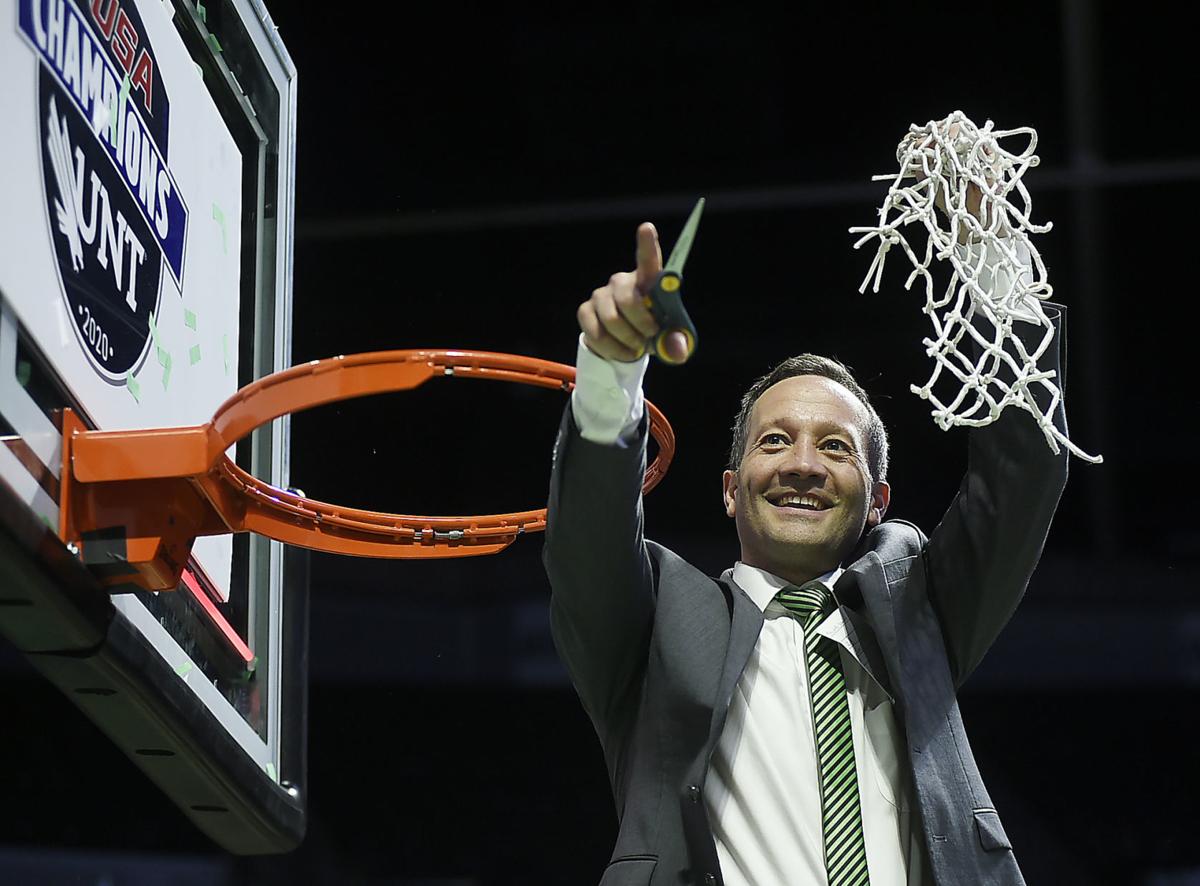 North Texas guard James Reese releases from the basket after a thunderous dunk to put UNT ahead for good. Teammates and the crowd in the Super Pit go wild as North Texas beats Western Kentucky in overtime 78-72 Sunday to win the Conference USA title.

Javion Hamlet clutched the ball, heard a whistle and jogged straight to the North Texas bench with a second remaining in the Mean Green’s game against Western Kentucky on Sunday.

As Grant McCasland was waiting for a celebratory high-five from his starting point guard, a smile spread across his face.

UNT’s head coach sold Hamlet on the idea of passing on scholarship offers from programs like West Virginia and Cincinnati to chase conference titles at UNT just a few months ago.

Hamlet and the Mean Green reached that goal with a 78-72 overtime win over WKU at the Super Pit. The win gave UNT its first regular season Conference USA title.

“This is a great feeling,” Hamlet said as he stood in a green and white pile of confetti. “This was the vision since I got to campus. My coaches and teammates embraced me. It paid off today.”

McCasland asked Hamlet to take a leap of faith by coming to UNT over the summer from Northwest Florida State College. UNT finished in a tie for ninth in C-USA last season and hadn’t won a championship since capturing the Sun Belt’s West Division title in 2009-10. Its last overall league title came in 1988-89 as a member of the Southland Conference.

Hamlet helped end that drought by scoring seven points and handing out two assists in overtime to help UNT pull away for the win. The Mean Green snapped an 11-game losing streak to WKU in the process.

“We have a resilient group that doesn’t care about history,” McCasland said. “They wanted to win the game, and not because we had lost to them 11 times in a row. They really care about each other and just wanted to win.”

UNT pulled through after Jared Savage hit a 3 from the top of the key with 2:29 left in overtime to gave the Hilltoppers a 69-68 lead.

Hamlet threw perfect alley-oop passes on UNT’s next two possessions. Thomas Bell converted the first before James Reese threw down a second straight dunk with 1:27 left to give the Mean Green a 72-69 lead.

Taveion Hollingsworth picked up a steal and fed Savage for a layup with 43 seconds left to pull WKU within 72-71.

Hamlet answered with a layup and UNT finished out the game at the free-throw line. McCasland thought all along that Hamlet could be the key piece of a championship team. The way Hamlet played against the Hilltoppers showed why. He finished with 25 points and nine assists.

“He has been a huge part of our success because of his belief,” McCaslsnd said. “He made mistakes today but kept playing and didn’t let them bother him.”

Hamlet’s performance helped UNT when the pressure was at its highest.

WKU rallied from a 15-point second-half deficit to beat UNT earlier in the season and appeared to be on its way to a second straight win over the Mean Green late in the second half.

The Hilltoppers had a 63-57 lead with 4:10 remaining after Carson Williams hit a free throw.

That was the final point WKU scored in regulation.

“Our defense late was big,” Reese said. “They’re a great team with great players. You have to be physical without fouling and make sure you contest shots.”

UNT did just that, but still had a few anxious moments in the closing seconds of regulation after Hollingsworth drew a foul with 5.6 seconds left and the score tied at 63.

The junior guard led WKU with 22 points and came into the day shooting 85.4% from the free-throw line.

“I was nervous when they went to the line,” Reese said. “He’s a great player. I thought he was going to make them.”

Hollingsworth missed both, opening the door for UNT, which outscored WKU 21-9 from the 4:10 mark of regulation on.

UNT made two of those defensive stands after Savage hit his 3 to give WKU its last lead of the game.

Hamlet took care of the rest by floating perfect passes to Bell and Reese.

Hamlet stood on the Super Pit floor a few minutes later, a piece of the net UNT had just cut down tucked behind his ear. The scene mirrored the vision McCasland sold Hamlet when the Mean Green’s star guard decided to transfer to UNT over the summer.

“It’s a blessing to be in this position,” Hamlet said. “This is why I came here.”