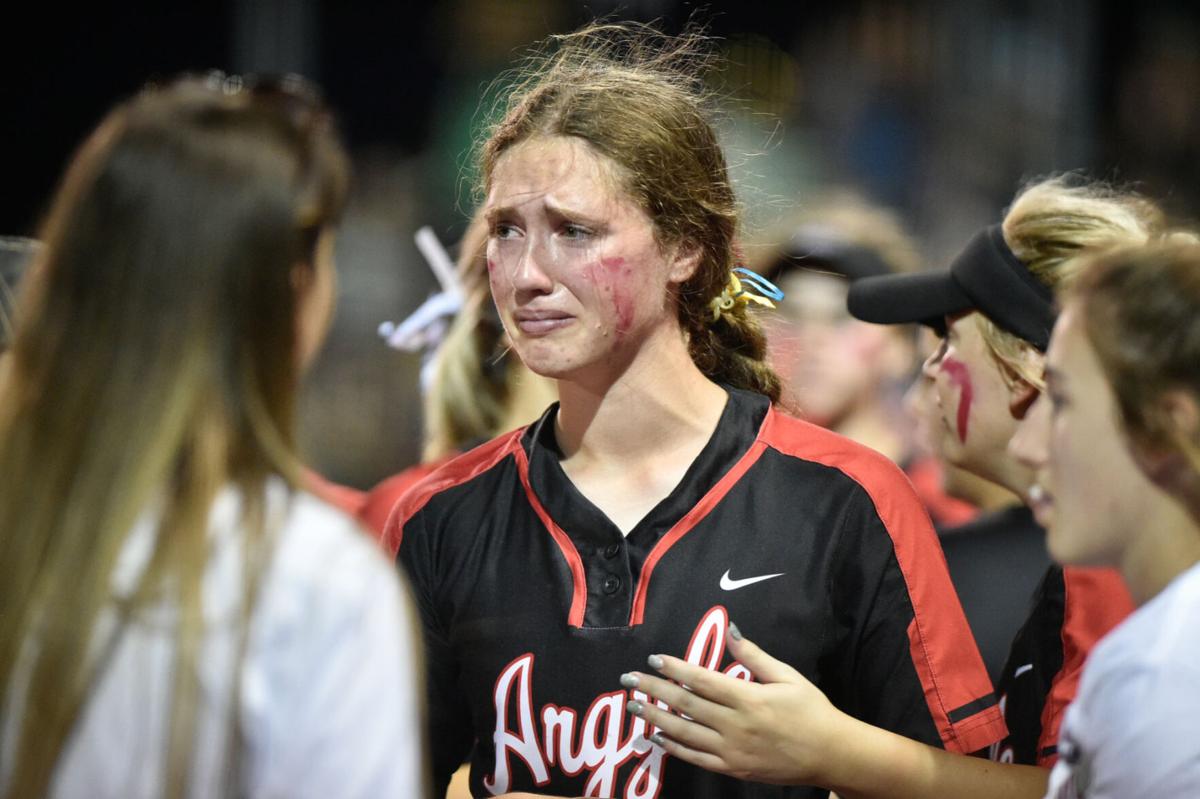 Argyle’s Ava Edwards reacts after her team is defeated by Iowa Park on Thursday at Bowie High School. 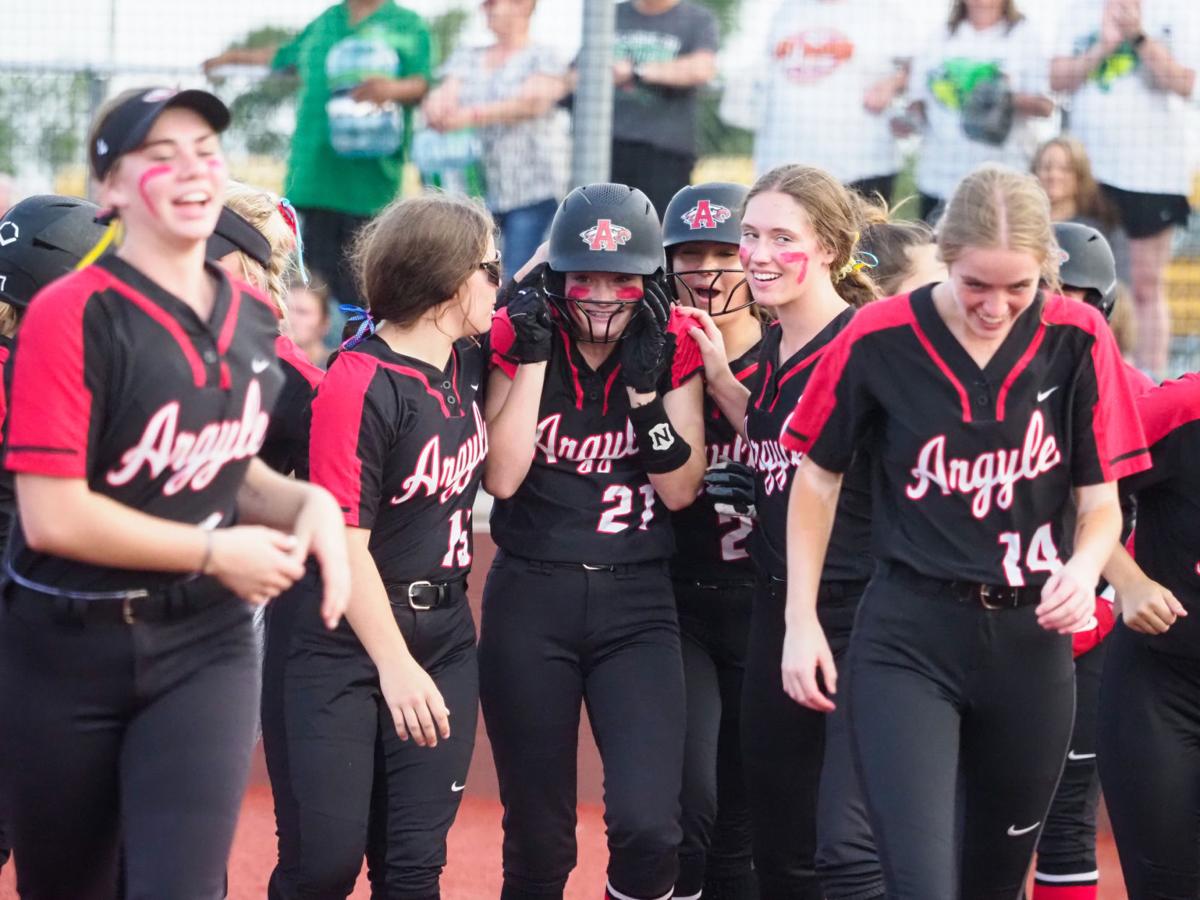 Argyle’s Keira Inman (21) celebrates with her teammates after she hits a home run off of Iowa Park on Thursday at Bowie High School. 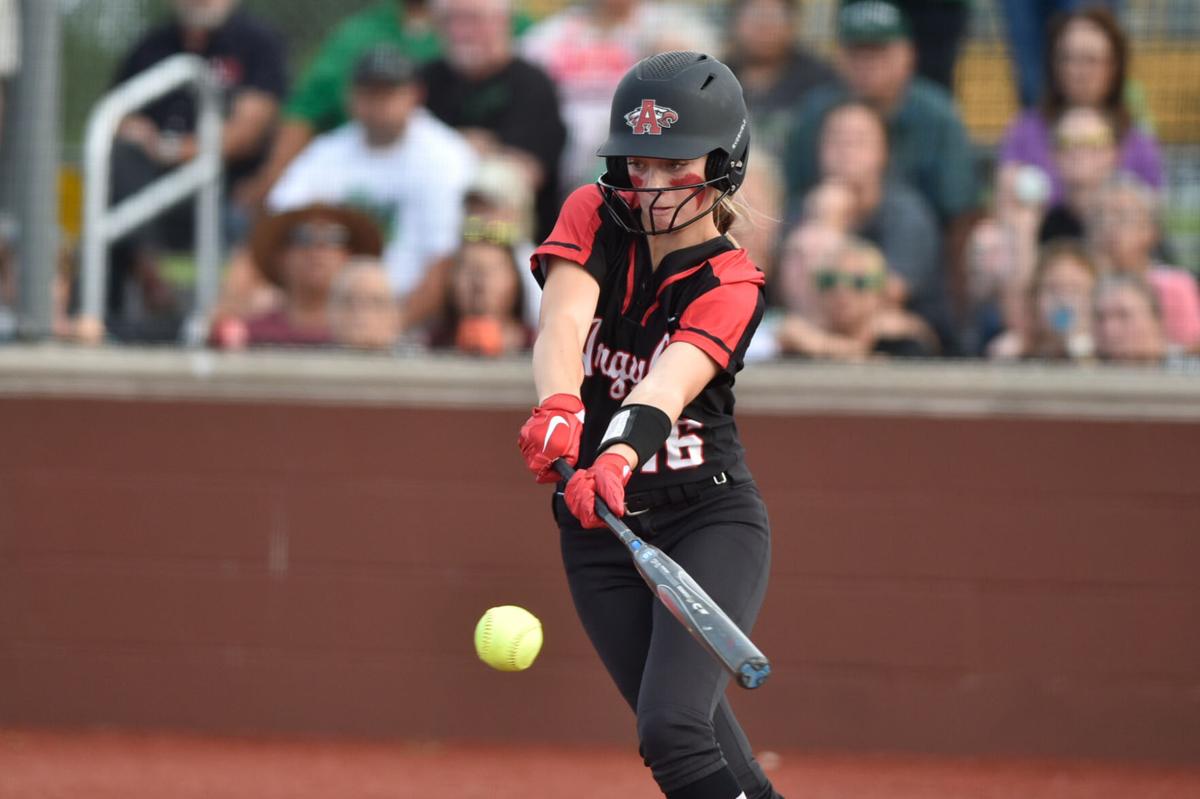 BOWIE — Argyle couldn’t have drawn up a better start to Game 2 of the Class 4A Region I final if the Lady Eagles tried to.

With her team’s season on the line, Argyle centerfielder Keira Inman wasted little time making an impact. Inman deposited the first pitch of the game over the left field wall for a solo home run, giving the Lady Eagles an early jolt of momentum.

Argyle had a lead — but it didn’t last long.

Iowa Park’s lethal lineup regained the lead in the bottom of the first before erupting for five runs in the fifth, as the Lady Hawks knocked off the Lady Eagles 8-1 to win the 4A Region I title.

The Lady Hawks tied the game at 1-1 on an RBI-double by their starting pitcher, Abby Dowell. Moments later, Raylea Parsons put Iowa Park up for good, cranking a two-run homer to left that gave the Lady Hawks a 3-1 advantage.

Argyle put multiple runners on in the third, fourth and fifth innings, but the Lady Eagles were never able to capitalize on them. Cadence Schrader struck out to end the third inning, leaving runners at first and second.

“Those are runners in scoring position, and that’s the whole key to the game,” Cook said. “They got theirs in, and we didn’t. We’ll work on that.”

Iowa Park then blew the game wide open in the bottom of the fifth, putting the first two runners on to set the stage for Dowell. Cook opted to walk Dowell in favor of Paige Gallegos, who homered in Game 1 — and she made Argyle pay.

Gallegos promptly delivered a 2-RBI single through the left side of the infield, and the Lady Hawks added three more runs in the frame to seize control.

The Lady Hawks’ catcher rips a two-RBI single through the left side of the infield to make it 5-1 Iowa Park.

It was a pick your poison situation for Argyle. Walk Abby Dowell to get to Gallegos, and she makes them pay. #txhssoftball pic.twitter.com/40igArV8h3

“[Walking Dowell] was really my only choice, because she was going to hit it,” Cook said. “We hadn’t thrown anything to get her out. She’s got three dents out there in the fence. I had already thought about it. The only chance we had was to get into a double play at home plate. We got the ground ball, it just went right beside the shortstop.”

Argyle ends its best season in school history at 28-12-2 overall.

It was the Lady Eagles’ first appearance in a region final in school history after they already claimed their first-ever district title.

“The first thing I told [the team] was, ‘You’re amazing. Each one of you have put your heart into it, and you probably aren’t going to realize it for a couple of weeks until this settles down and somebody says they had a great season,’” Cook said. “And they will say, ‘Yeah, we did.’ They will recognize what they’ve accomplished of getting here and fighting through series after series.”