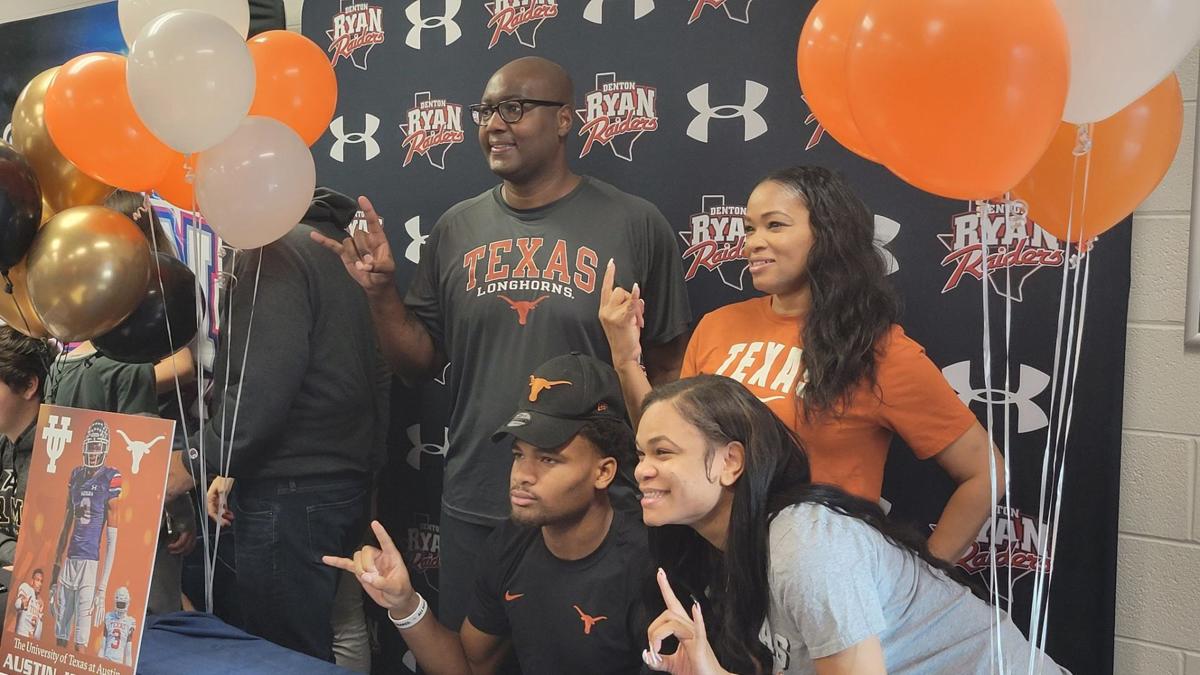 Ryan senior defensive back Austin Jordan poses with his family during national signing day on Wednesday. Jordan, a highly coveted defensive back, signed to play at Texas. 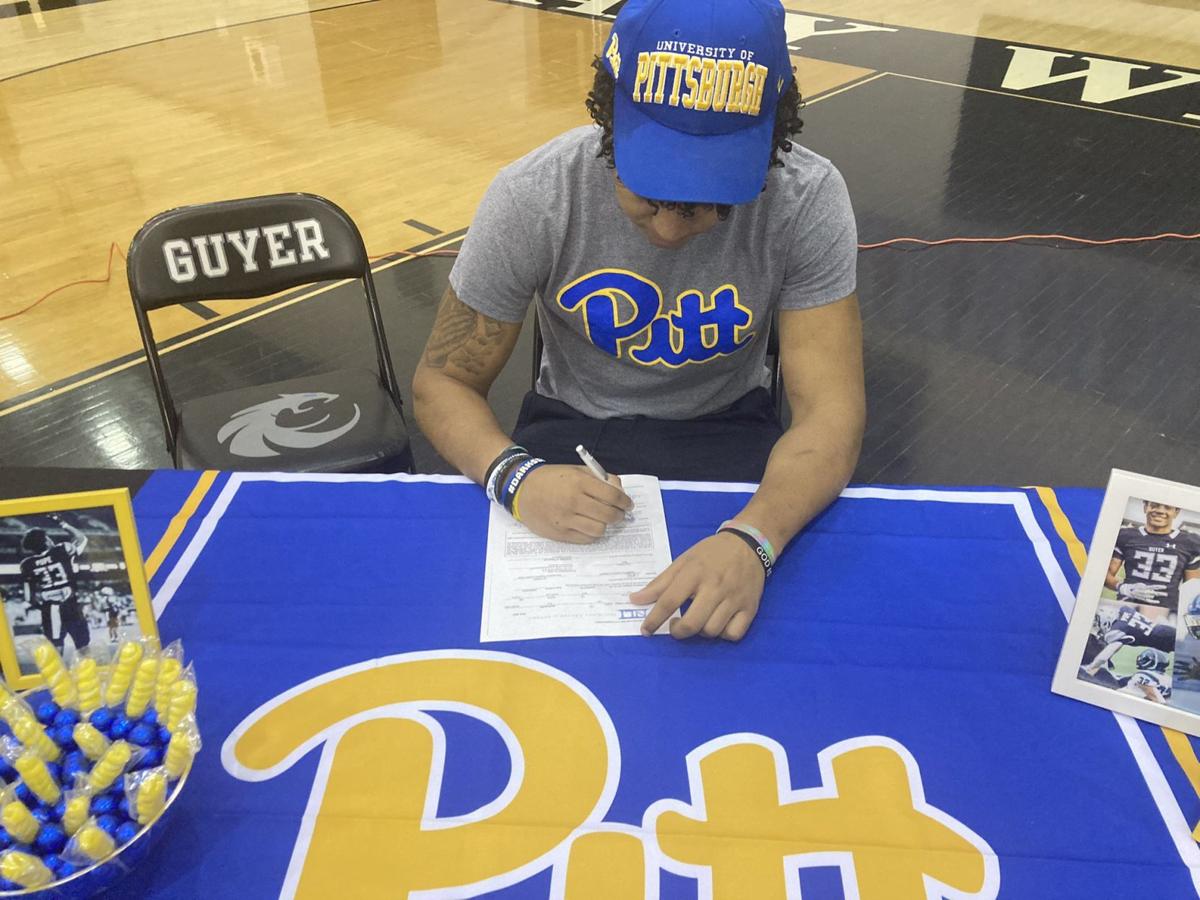 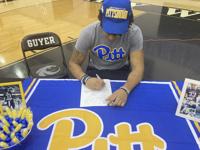 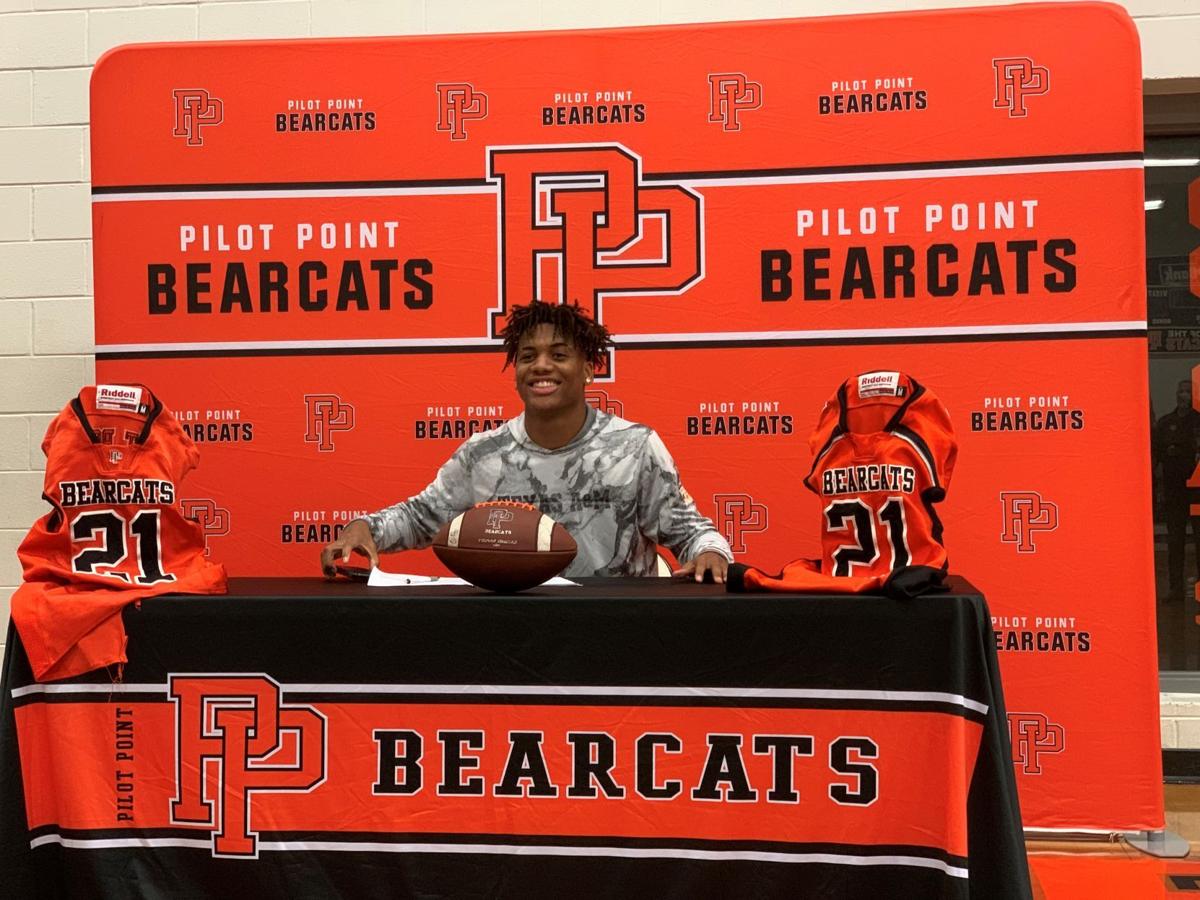 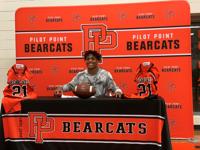 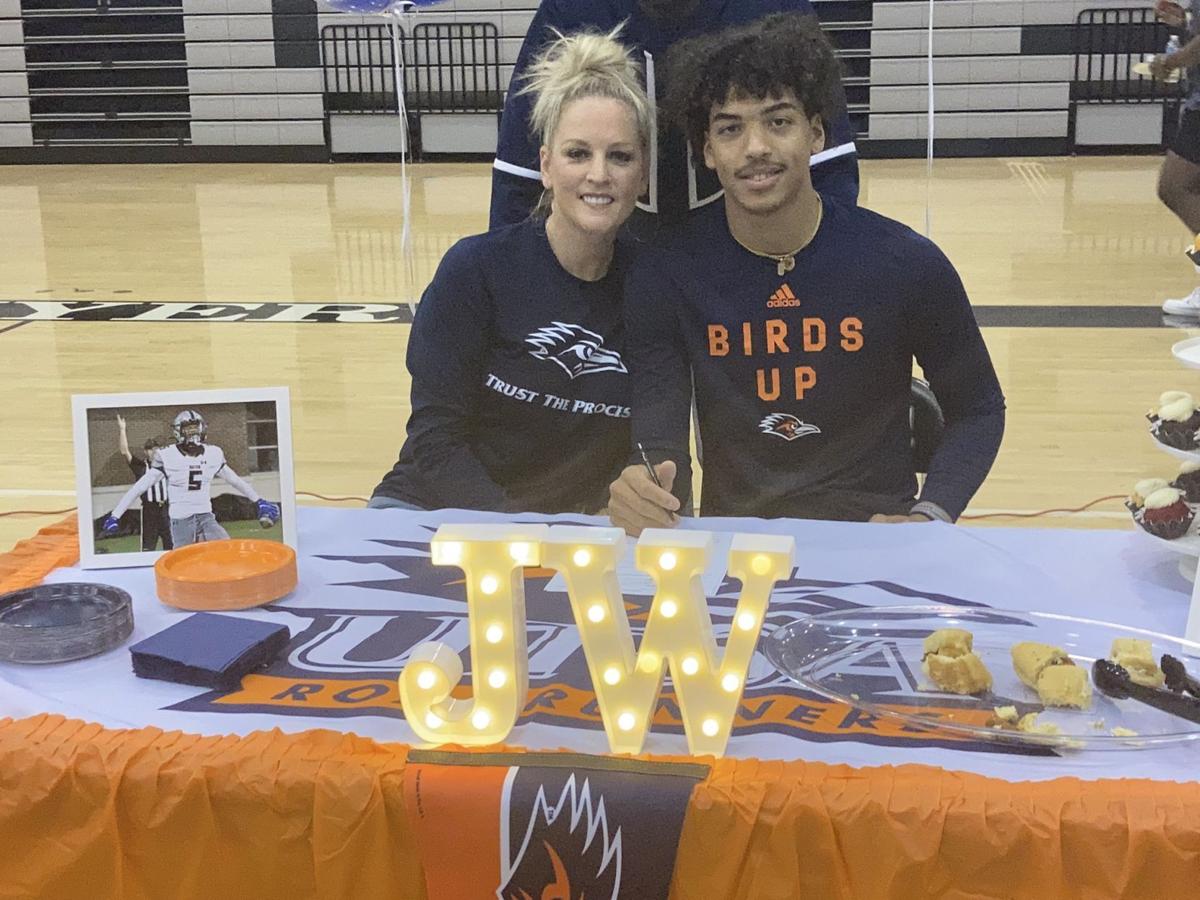 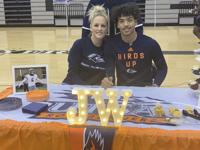 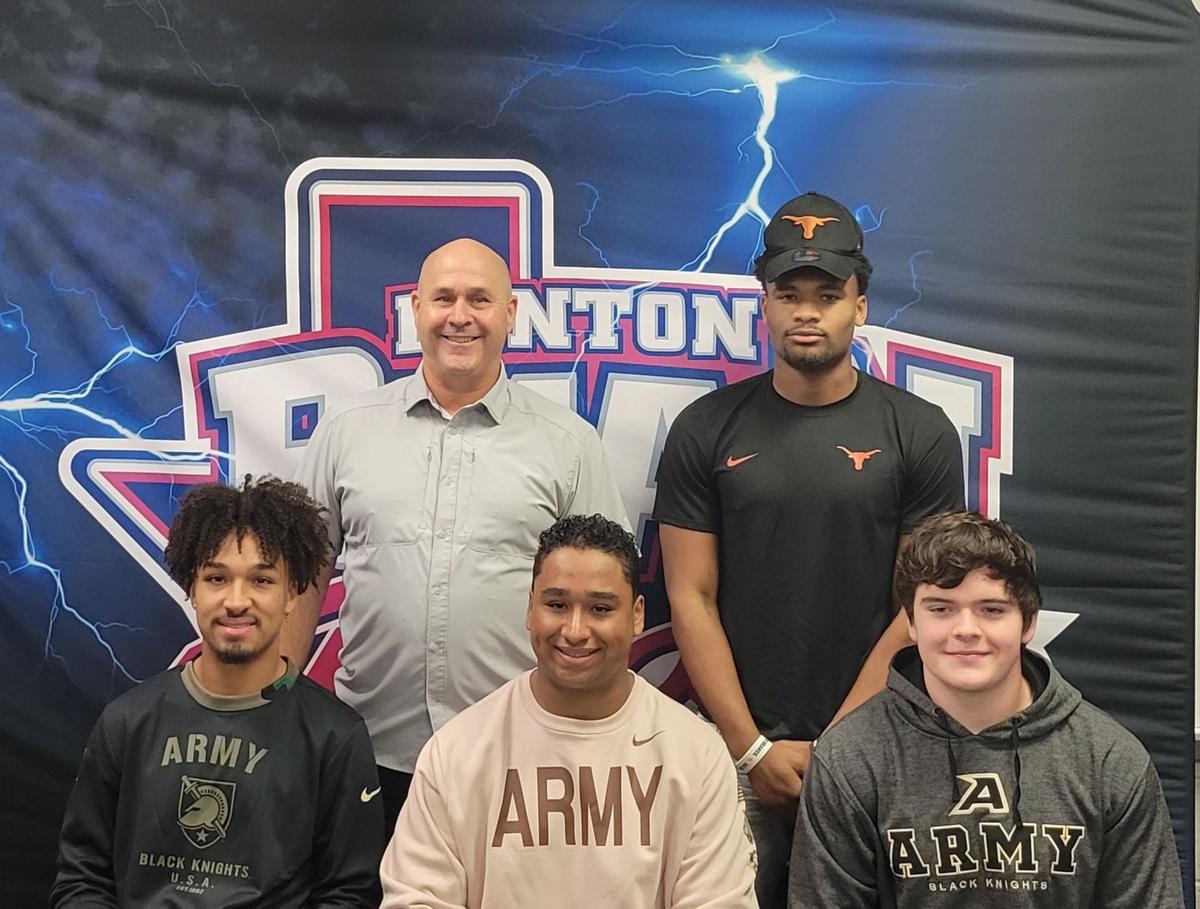 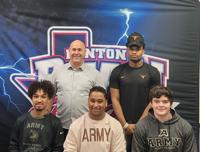 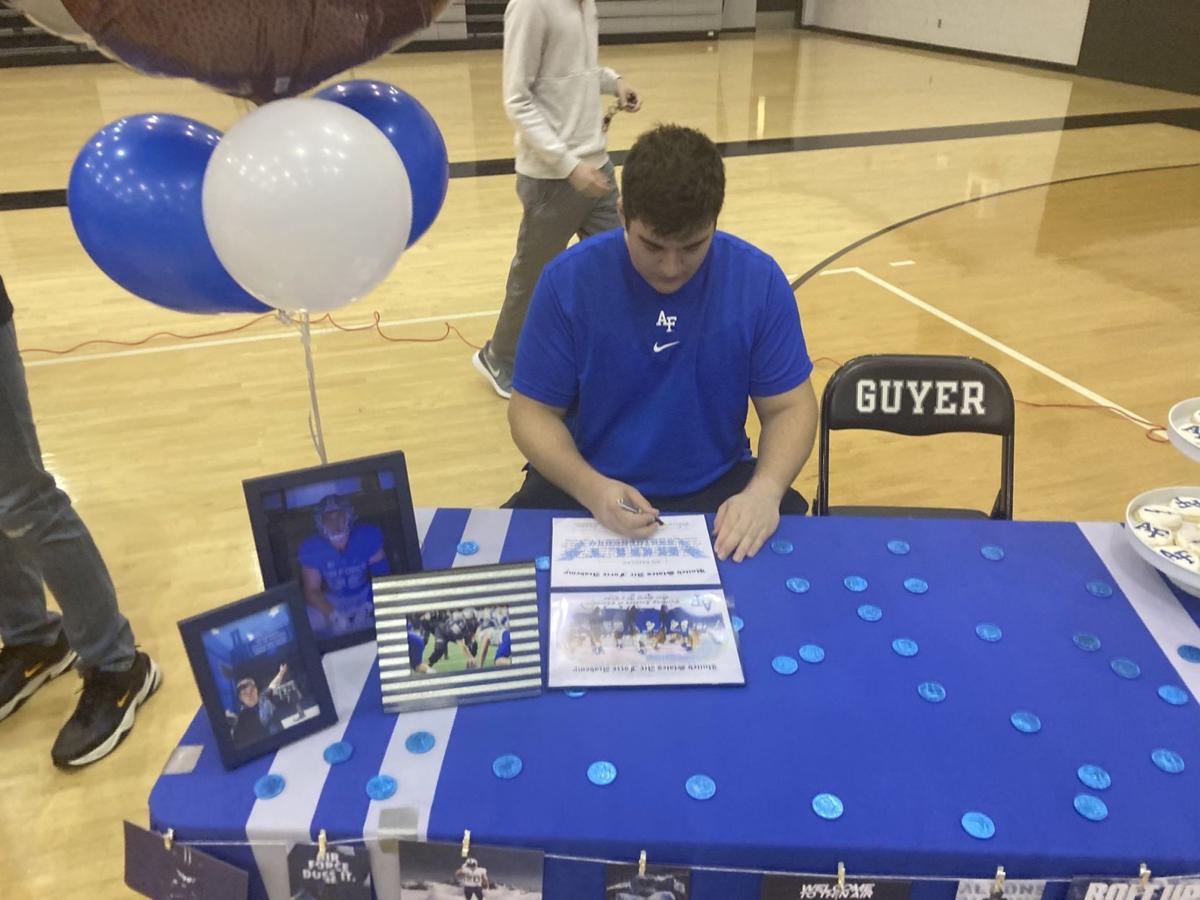 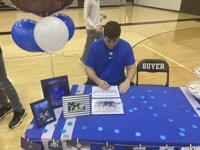 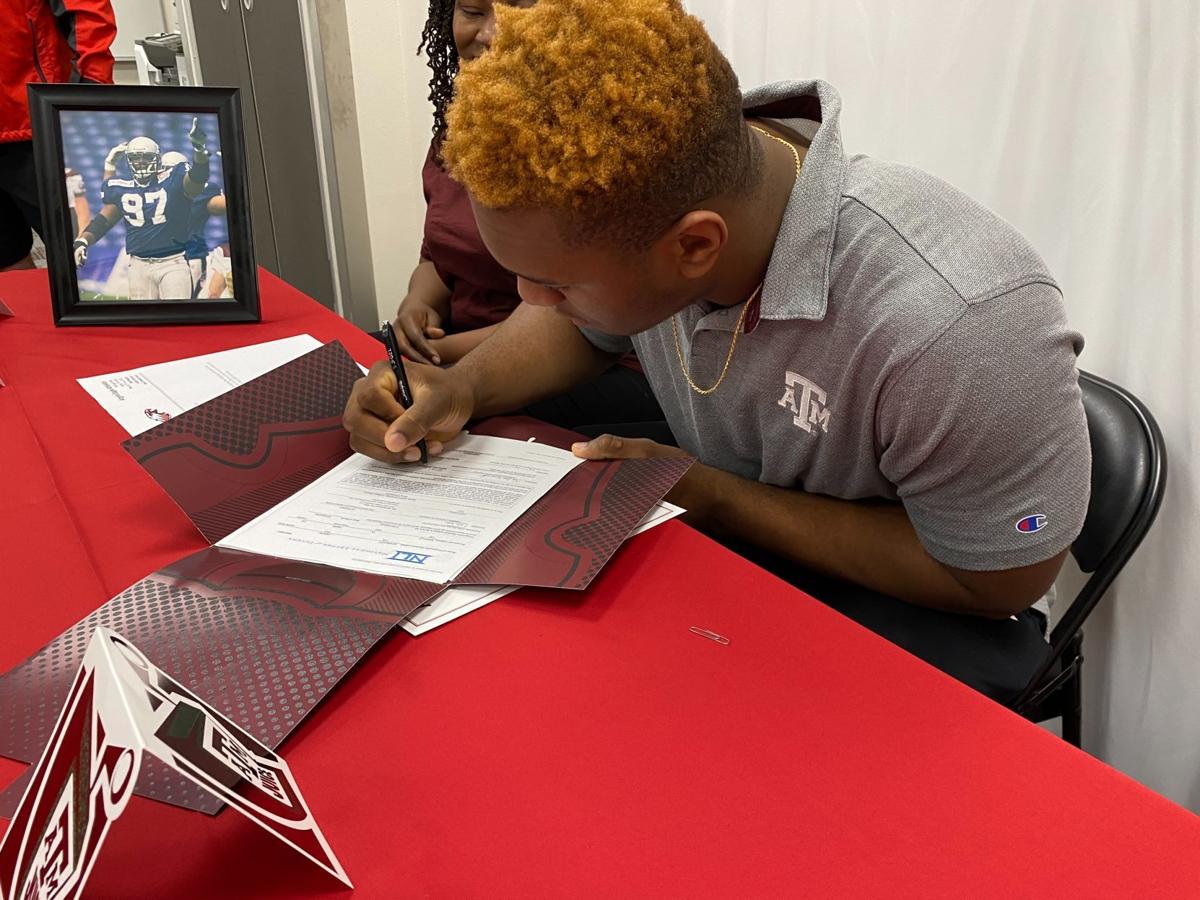 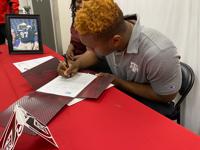 Austin Jordan said it was hard not to crack a smile while listening to coach Dave Henigan reminisce during Wednesday’s early national signing day ceremony.

As he does every year, Henigan shared a few fun stories with the crowd about each of his signees, and he started with a tale about Jordan dominating his way through a 7-on-7 event as a fifth grader.

It was the first time Henigan or any of his coaches had laid eyes on the talented youngster. And they were glad he’d one day be at Ryan.

“I remember killing those kids back then,” Jordan said with a laugh. “I was playing up with the older kids.”

From that random field to Wednesday’s signing day seven years later, everyone was right about Jordan. The four-star defensive back quickly asserted himself as a major piece to Ryan’s suffocating defense over a three-year stretch that saw the Raiders play in two state title games — winning one in 2020 — and one state quarterfinal this season. Jordan caught the eye of every college program in the country, and on Wednesday, he closed his high school career by signing his national letter of intent to play for the Texas Longhorns.

“It’s been a long journey, and I can’t help but be proud of myself,” Jordan said. He committed to Texas in July after also receiving offers from Oklahoma, Ohio State and others. He finished his senior year with 28 total tackles, two interceptions, six pass breakups and one forced fumble. He was also a major force at wide receiver. “This is a big dream; I’m more excited now [than when I committed].”

Jordan was one of four athletes from Ryan to sign on Wednesday, the first day of the early national signing day period for college football. And they were all to Football Bowl Subdivision programs. Joining him were the trio of defensive tackle Mason Davis, wide receiver Michael Davis and star offensive lineman Henry Appleton, all of whom signed with Army.

All four athletes were three-year varsity starters, compiling a 42-3 record. And now they can continue their careers at the next level. For Jordan, one benefit to playing for Texas is to team back up with former Ryan star Ja’Tavion Sanders, who signed last year. Mason and Michael Davis are twin brothers and have a golden opportunity to continue playing on the same team in college. Appleton rounded out that Army trio in July, giving the Raiders perhaps their largest single-year military signing in school history.

“We all earned it. We went to practice together, fought hard, and did whatever was best for the team,” Jordan said.

“My first year of tackle football was with Austin Jordan, and I’ve known Henry for a while,” he said. “Just to see our progress through the years and to finally sign on the dotted line at the same time. It’s awesome.

“Also, I don’t think many people understand that feeling [of playing with your brother]. I get to spend a few more years with him, too.”

Mason and Michael Davis burst onto the scene as juniors while helping lift Ryan to a 15-0 record and a Class 5A Division I state title. Things were no different this year, with Mason racking up 62 tackles, including 13 for loss, to go with three sacks. Combined with Jordan, they led a defense that gave up a stingy 13.71 points per game.

Michael Davis showed his versatility at several positions offensively, including receiver and Wildcat quarterback. He finished with 613 receiving yards and five total touchdowns. He hopes that versatility will help him at Army.

“They said I can possibly get on the field early,” Michael Davis said. “I’m open to play anything. It just feels great to sign and make it official. It’s a great opportunity; it’s more than just football.”

Appleton anchored a veteran offensive line that paved the way for a running game that amassed 2,487 yards and 32 touchdowns in 2021 while also helping protect new quarterback Khalon Davis. Appleton also had offers from Air Force and Furman but appears to be the perfect fit for an Army team that relies heavily on its running game.

Appleton said serving his country and having a chance to keep playing with the Mason brothers were key contributors to his decision.

“I’m super stoked to get up to get up to West Point in the summer, workout, and be with the team,” Appleton said. “I’m just glad we all get to go up there together. Mason and Michael committed as soon as they visited, so I figured, ‘This place must be awesome.’ And it is.”

Guyer (14-1), which faces Austin Westlake (15-1) in Saturday’s Class 6A Division II title game at AT&T Stadium, had a mid-week celebration Wednesday when Marquan Pope, Jace Wilson, Joe Radovan and Rowan Briggs put pen to paper on their respective letters of intent in front of teammates and family members.

The 6-foot-2, 195-pound Pope, one of the top safeties in the state, is headed to 13th-ranked Pittsburgh, which recently won its first ACC title.

“When I took my official visit in June, it immediately felt like home,” Pope said. “I wanted a home away from home. I knew right then and there that was the place I wanted to be.

“So, this week, being able to sign with the college of my dreams and play in the state championship, that’s something every high school player wishes. I’m taking it all in.”

Wilson, a 6-foot-5 receiver who has recently eclipsed the 1,000-yard mark this season, opted to keep his ability in the Lone Star State with an ascending UTSA program.

The Roadrunners checked in at No. 24 in the latest Associated Press poll.

“Everything about (UTSA) felt like family,” said Wilson, who turned down offers from multiple Power Five schools to play for the Conference USA member. “I felt like they would give me a fair shot and treat me well.”

Wilson, also a standout basketball player and the brother of Kansas forward Jalen Wilson, was all smiles at his UTSA-themed signing table.

“It’s a blessing to sign with a great college and to get ready for a state championship,” Wilson said.

Guyer’s young and talented offensive line has been led by senior Joe Radovan, who is headed to Air Force.

But Radovan, whose signing table had festive Air Force Falcons cookies, was most interested in what the military academy could do for his post-football life.

“It’s a 40-year decision,” Radovan said. “After graduating, I’ll have a job waiting for me. You get through that freshman year, and after that it should be easier. It all came down to my future, but it’s great football, too.”

His brother, Connor Briggs, is a tight end for the Lions, who recently reached the second round of the FCS playoffs.

“Rowan can make an impact for us with his ability to come off the edge as a pass rusher,” Southeast Louisiana coach Frank Scelfo said in a news release.”

Pilot Point’s Harris headed to College StationPilot Point senior running back and linebacker Ish Harris finalized his long-standing commitment to Texas A&M in on Wednesday in front of a gym packed with friends and family.

He inspired former teammates from the Class 3A school.

“Our other guys came to see that a kid from Pilot Point can make it to the SEC,” Pilot Point coach Danny David said. “Just to have the recognition of A&M and for them to have an athlete like Ish, I think it’s going to help our future athletes that we got coming up. We wish him nothing but the best of luck as he moves forward.”

Harris racked up 2,619 rushing yards and 35 scores on the ground for the Bearcats. That was highlighted by a sensational junior campaign where he finished with a 1,000-yard season and 18 touchdowns while being named the District 4-3A Offensive Player of the Year.

Harris reflected on his time.

“My four years I had great coaches who taught me the ropes and turned me into a young man,” Harris said. “Now it’s time for me to go to A&M and turn into a man. Every day we worked during the summer, and we got better and better. So, I’d like to thank all my coaches for that.”

His commitment to the Aggies was not purely based on football.

“What really stood out was that I wanted to be an engineer,” Harris said. “That’s one of the best schools in the nation, and then also on the football field they continue to produce top level talent. So, I want to go there and develop and then get better.”

“I’m looking forward to just the environment,” Harris said. “Just running out in front of 110,000 people, there’s no better feeling. So, I’m ready to get there.”

Argyle duo staying in TexasTwo Argyle Eagles are headed to the Power Five.

Both Scarlett and Wilson were key cogs in Argyle’s 2020 Class 4A Division I title run and during their region semifinal appearance this season. Scarlett racked up 18 solo tackles and 26 overall to go along with one sack.

It was special moment for Scarlett, who signed his letter of intent near a framed photo of his late father, former NFL defensive lineman Noel Scarlett, who passed away in September.

Wilson, a 6-4, 275-pound tackle ,will be a part of a new-look Red Raiders squad under new coach Joey McGuire as well as play in the Under Amour All-American game in January. He also had offers from TCU, Washington State, Arizona State, Colorado, and Memphis.