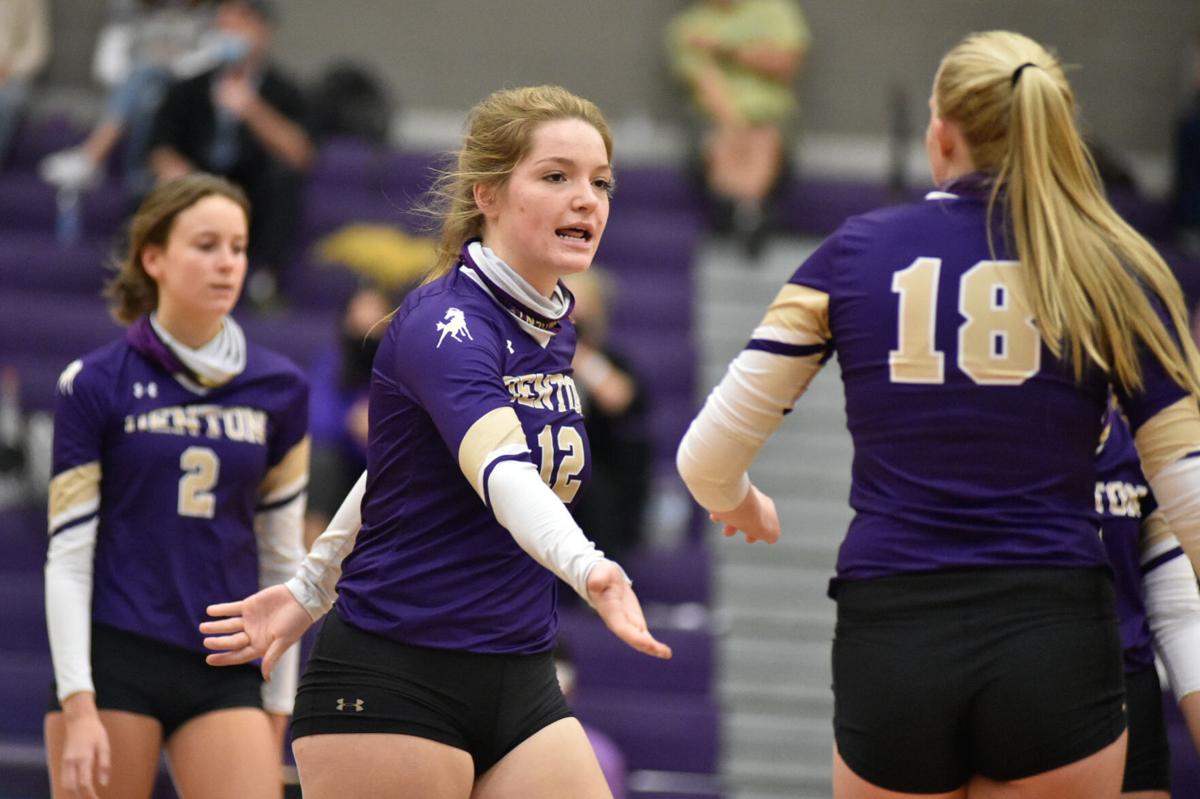 Denton’s Leah Stolfus (12) gives a high-five to teammate Lauren Perry (18) after they scored a point against Birdville on Nov. 18 at Denton High. Stolfus was named Blocker of the Year in District 6-5A. 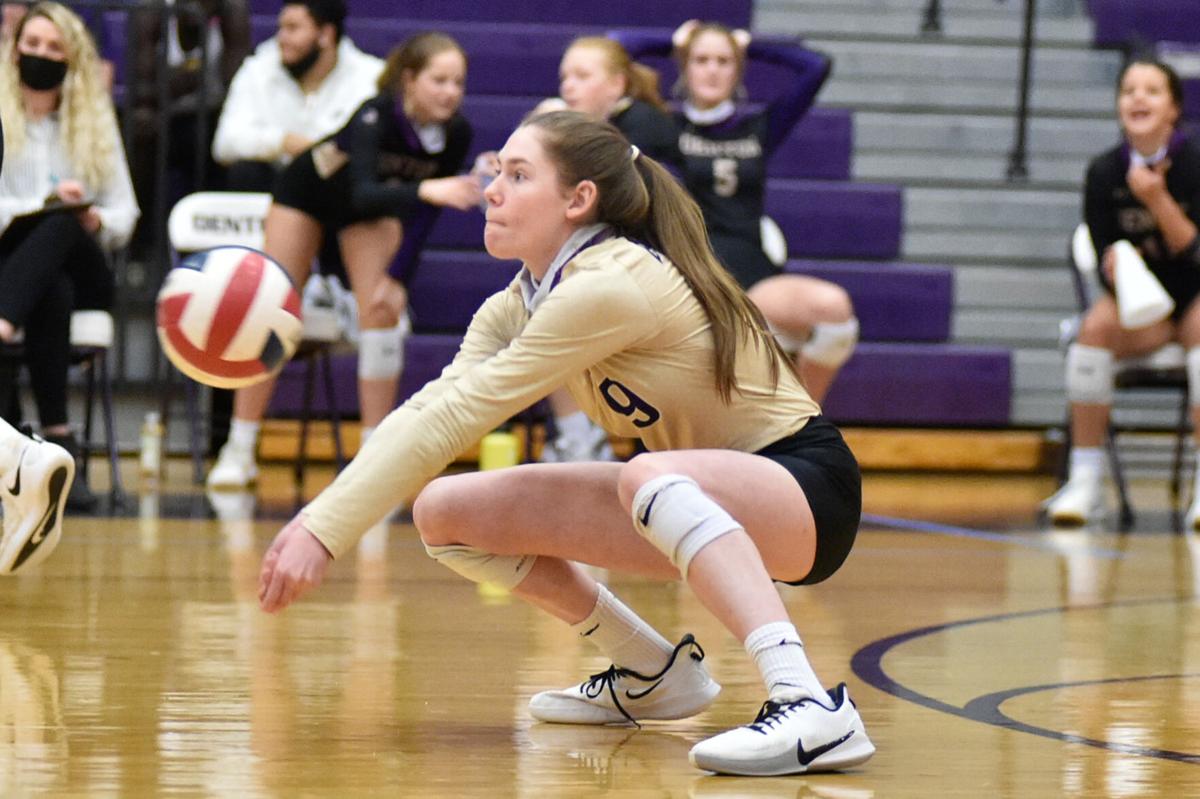 Denton’s Campbell Sweeten (9) digs the ball to a teammate during a Nov. 20 home game against Azle. Sweeten was the District 6-5A Co-Defensive Specialist of the Year. 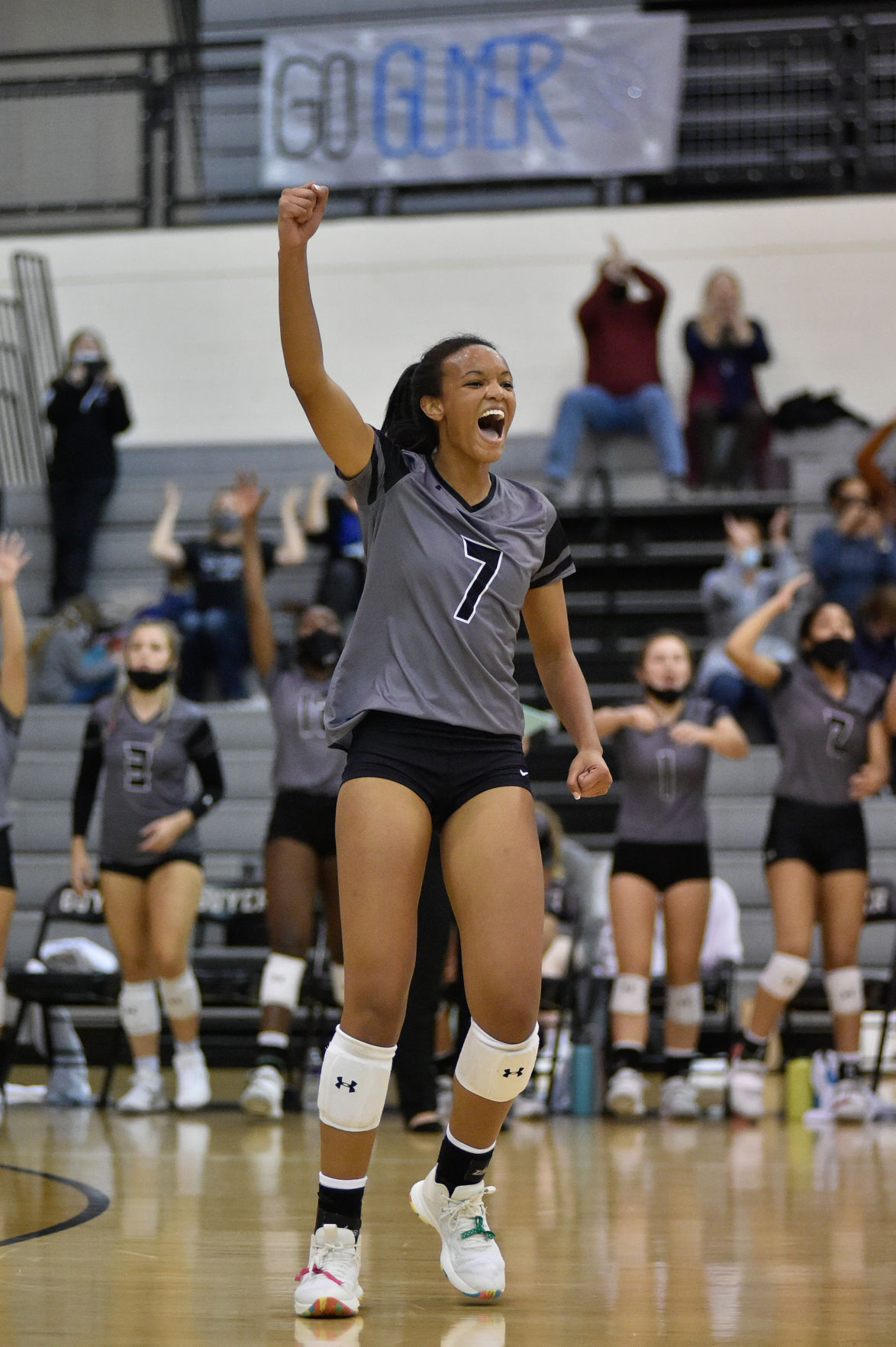 Guyer’s Jordyn Williams, District 5-6A’s Blocker of the Year, celebrates after her team scores against Prosper on Oct. 27 at Wildcat Gymnasium. 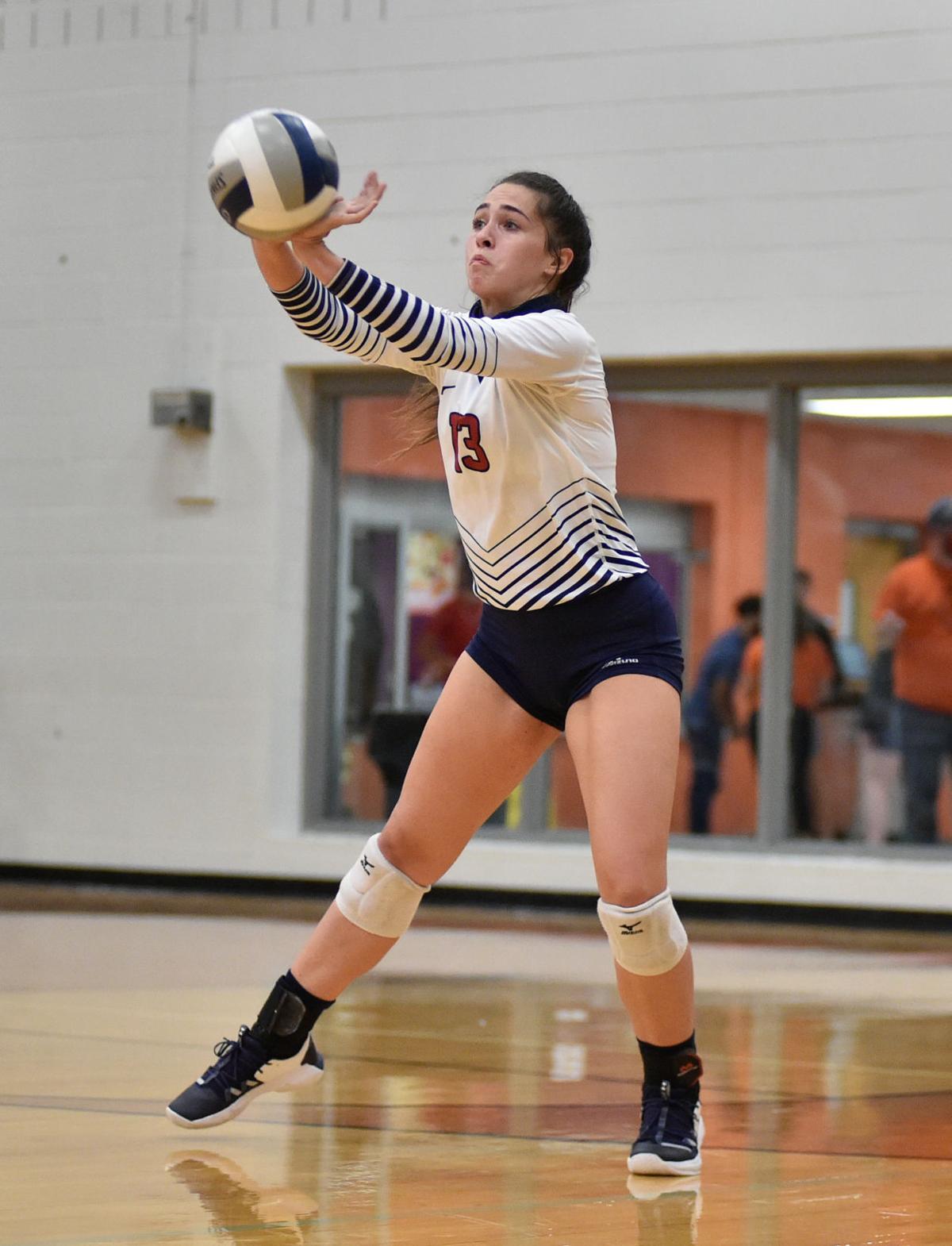 Aubrey’s Sydney Garrison (13) assists during an Aug. 25 game at Pilot Point. Garrison, a sophomore, was named Hitter of the Year in District 9-4A. 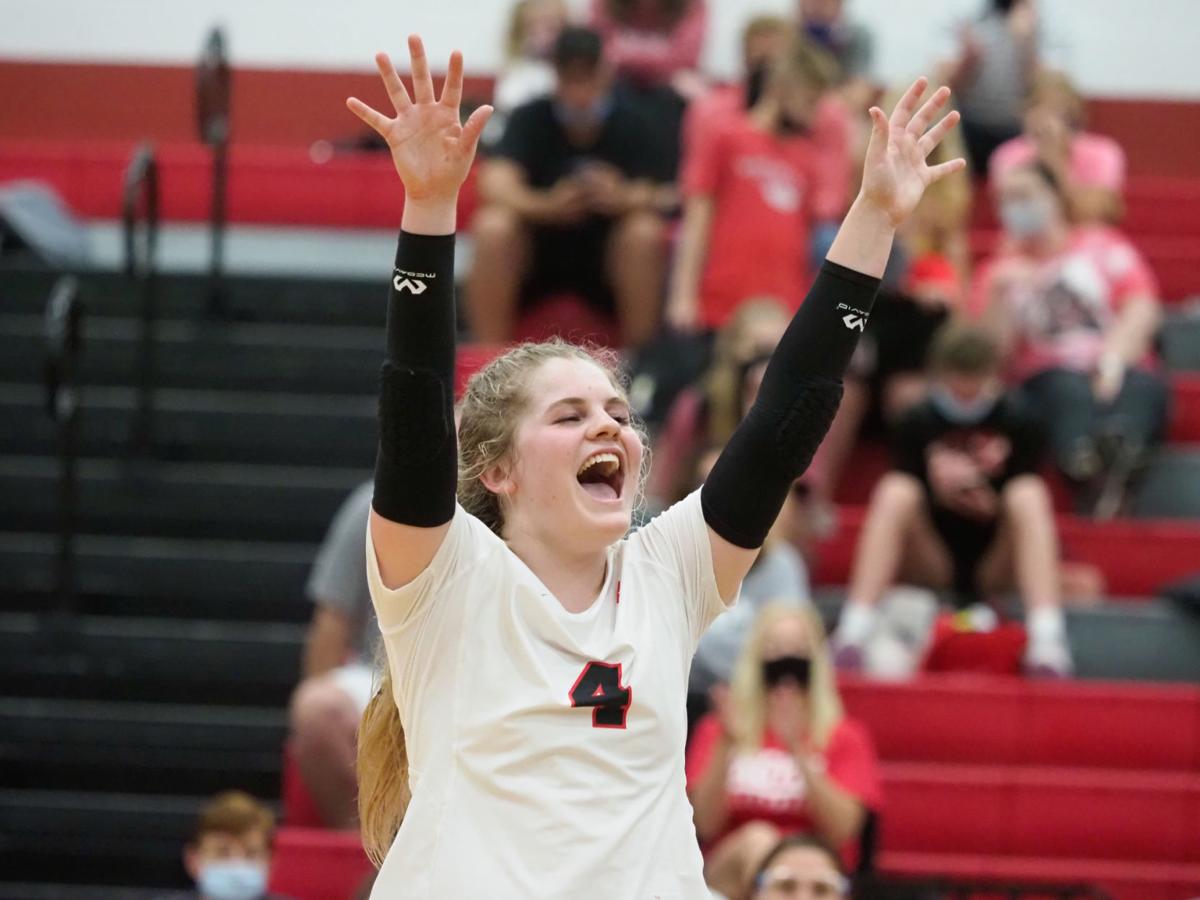 Argyle's Jada Price (4) celebrates after her team scored against Ponder on Sept. 1 at Argyle High. 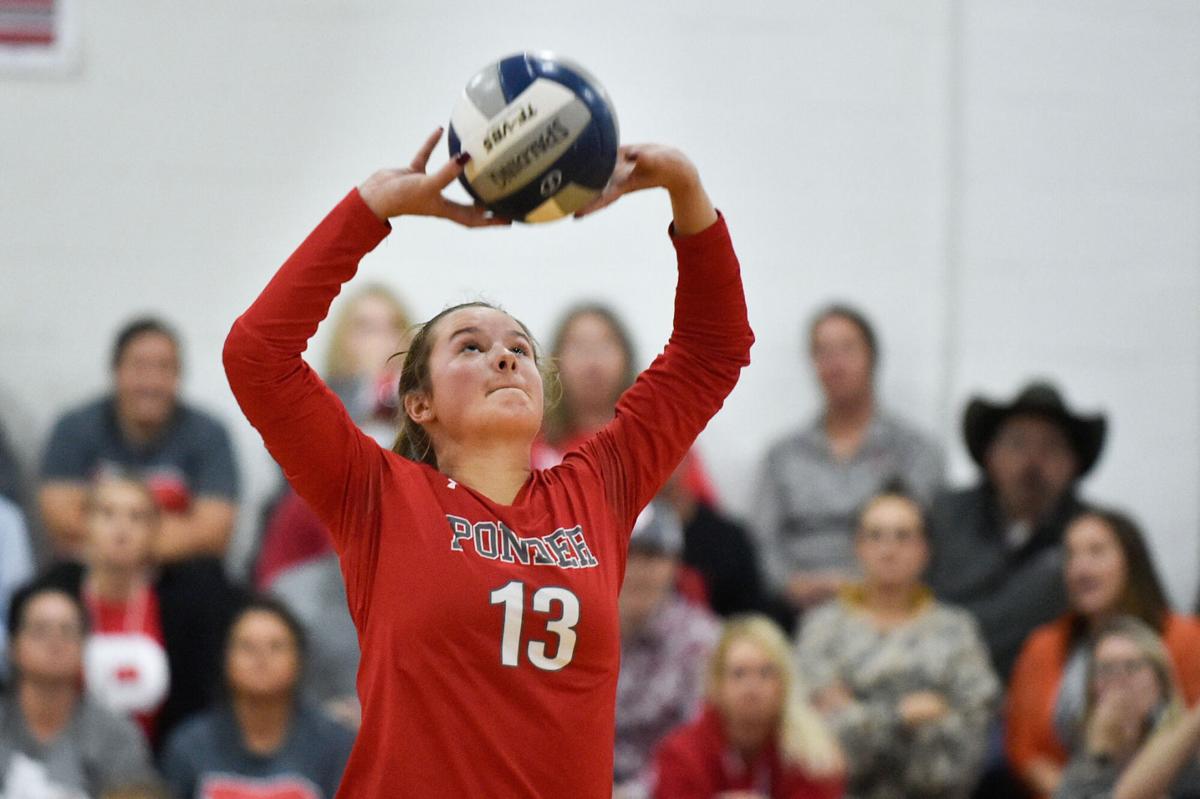 Ponder's Averee Tipton (13) sets up the ball for a teammate during a home game against Pottsboro in 2019.

Despite 2020 being one of the most trying seasons in recent memory, that did not stop multiple local teams from soaring to new heights.

Denton’s Campbell Sweeten was the District 6-5A Co-Defensive Specialist of the Year, while Abby Folsom was the Setter of the Year. Leah Stolfus earned Blocker of the Year honors.

Sweeten led the Lady Broncos in digs with 400. She also served 42 aces. Folsom dished out 637 assists, and Stolfus rejected 82 shots to go along with 263 kills.

Stolfus and fellow senior Taylor Thomas were named to the Texas Girls Coaches Association Class 5A all-state team. Denton coach Cassie Headrick and her staff were also named 6-5A Coaching Staff of the Year.

Guyer, meanwhile, advanced to the region semifinal behind the duo of Jordyn Williams and Brooke Slusser. Both were named to the TGCA Class 6A all-state team.

The pair also earned superlative honors in District 5-6A, with Williams being named Blocker of the Year and Slusser earning Setter of the Year honors.

Williams, an All-American and Kentucky signee, blocked 105 shots for the Lady Wildcats. She also put down 222 kills and made 214 digs.

In District 9-4A, Aubrey sophomore superstar Sydney Garrison was named Hitter of the Year.

Garrison was the catalyst behind the Lady Chaparrals’ offense, burying a whopping 509 kills on the year. She had 101 kills in Aubrey’s five playoff games and averaged 5.2 kills per set. In addition, she was also named to the TGCA Class 4A all-state team.

Aubrey’s setter, Gracie Bell, was the 9-4A Setter of the Year. Bell distributed 1,037 assists and averaged 10.4 assists per set.

In District 7-4A, Madeline and Miranda Guffy were the Co-Setters of the Year. The duo combined for 667 assists to help Krum reach the area round of the playoffs.

Krum’s Payton Lucas was the 7-4A Server of the Year after serving 38 aces and posting a 96% serve percentage. Argyle’s Jada Price and Krum’s Sydney Martin were the 7-4A Co-Liberos of the year.

Price made a team-high 530 digs for the Lady Eagles, who made it to the region quarterfinal before falling to eventual Class 4A champion Decatur.

Ponder and Pilot Point rounded out local schools with players that earned superlatives.

Averee Tipton, a senior for the Lady Lions, was named District 10-3A Co-MVP. Tipton averaged 32.3 assists per game and dished out 808 total assists on the year. The Lady Lions won a bi-district title before falling to Gunter in the area round.

Ponder’s Sawyer Mulkey was the district Co-Newcomer of the Year.

Coaching Staff of the Year: Celina

Coaching Staff of the Year: Boyd