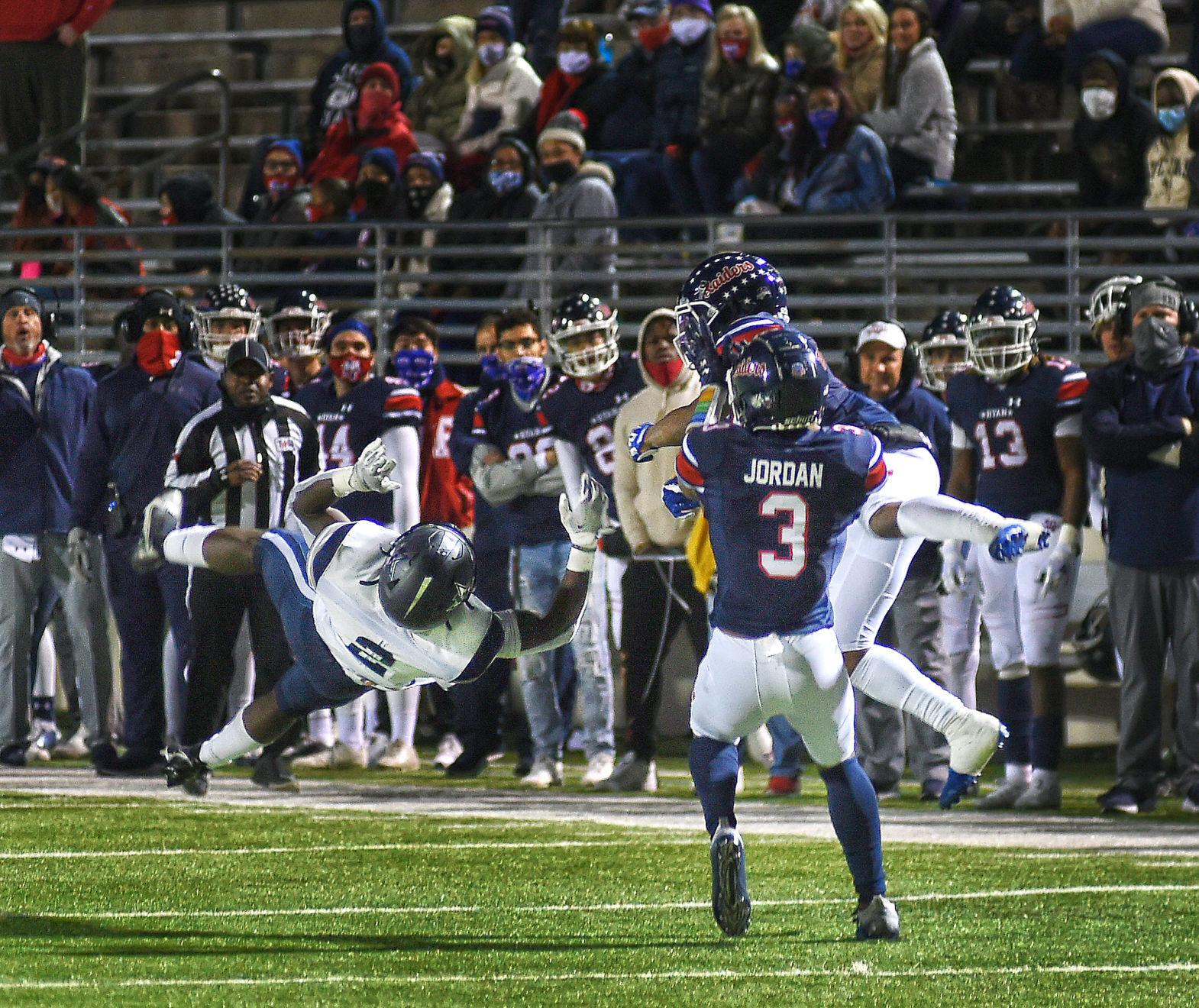 Ryan cornerback Garyeon Robinson (7) breaks up a pass intended for Frisco Lone Star receiver Ashton Jeanty (2) that landed in the hands of Ryan’s defensive back Austin Jordan (3) for an interception with less than two minutes left in the game, sealing the victory for the Raiders on Friday night. 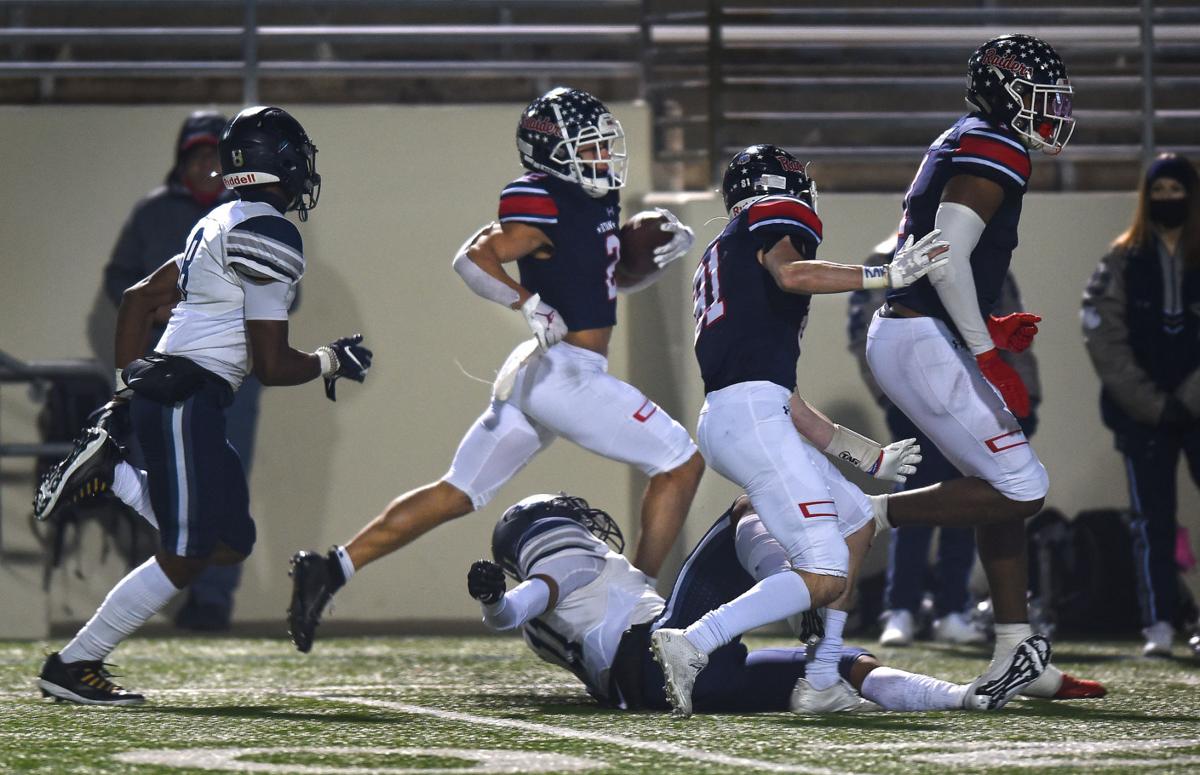 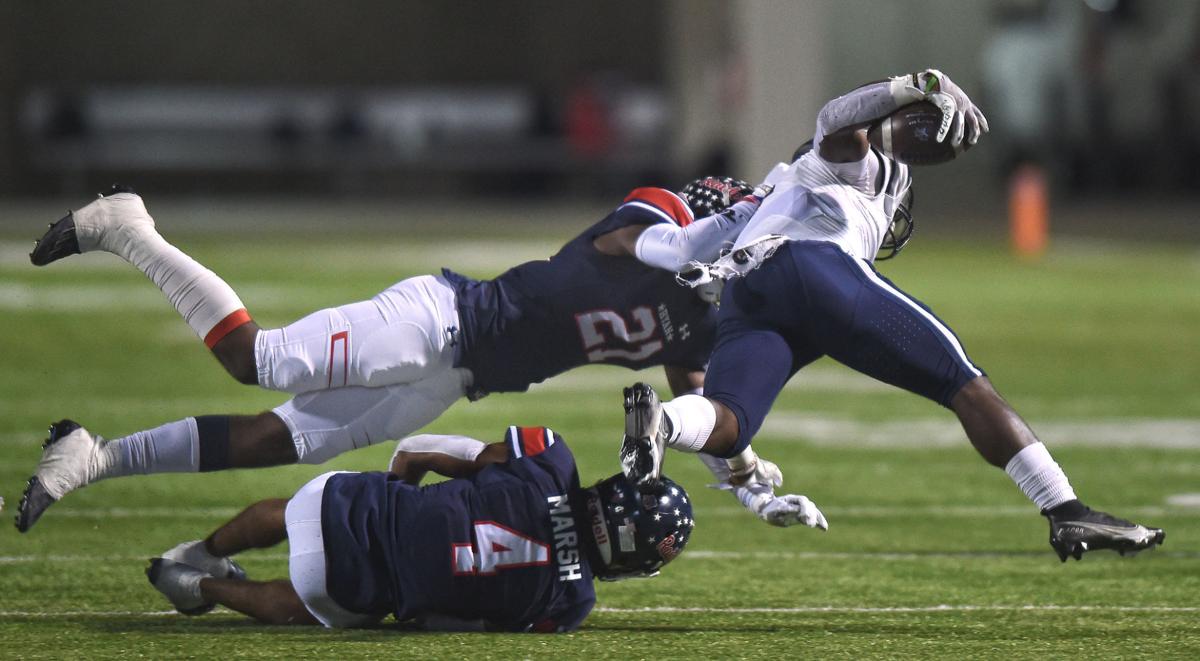 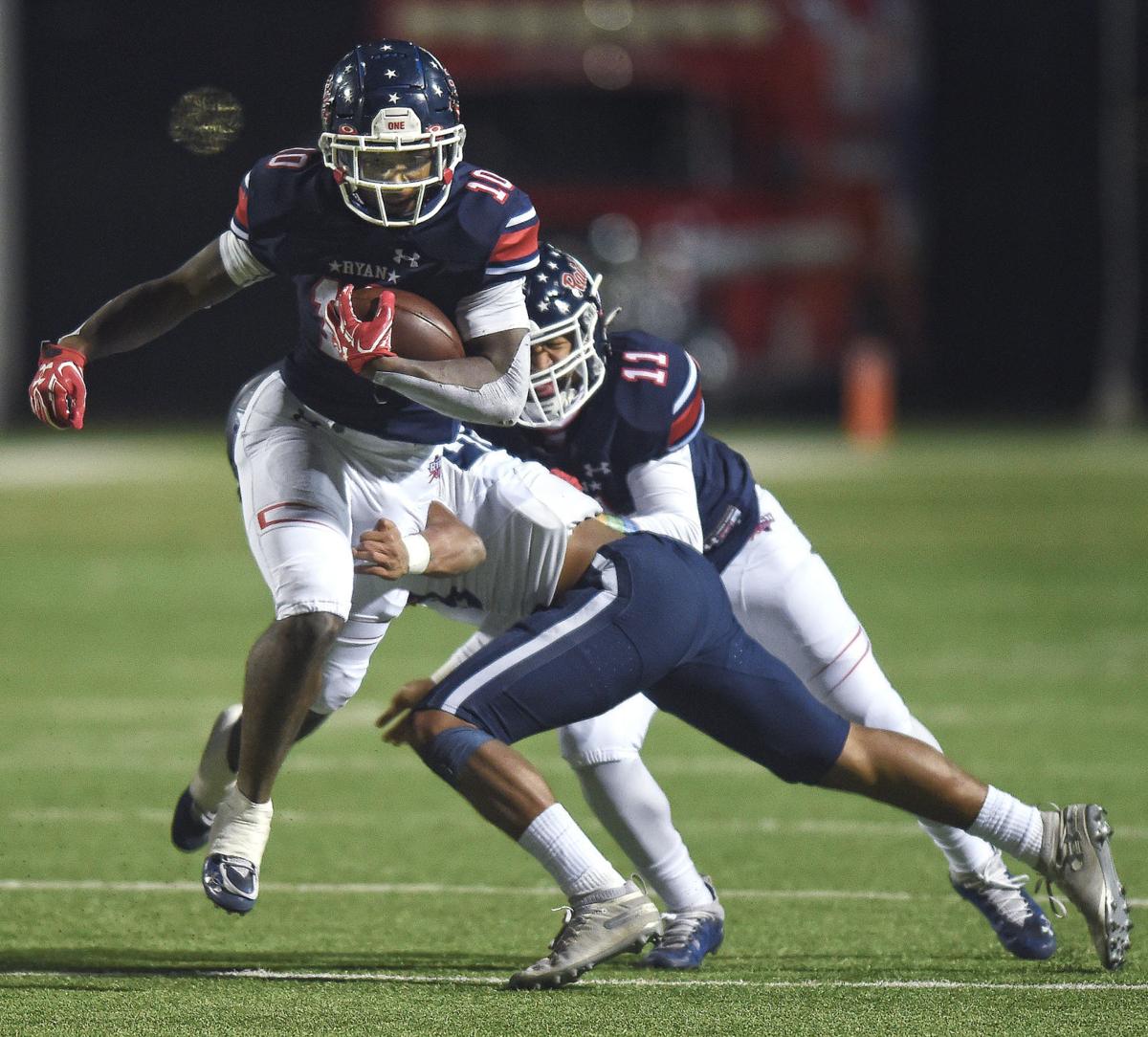 Ryan cornerback Garyeon Robinson (7) breaks up a pass intended for Frisco Lone Star receiver Ashton Jeanty (2) that landed in the hands of Ryan’s defensive back Austin Jordan (3) for an interception with less than two minutes left in the game, sealing the victory for the Raiders on Friday night.

It’s not the shiny hardware Ryan expects to add to its trophy case by season’s end, but the District 5-5A Division I title is a good place to start. And outgunning a fellow state-ranked opponent like Frisco Lone Star on Friday at C.H. Collins Athletic Complex to win it sends a clear message to the rest of the state heading into the postseason.

With the win, Ryan, the No. 1 team in the state, extends its regular-season winning streak to 59 games.

This is also the Raiders’ sixth straight district title.

But they clearly want more.

“It’s a great feeling, but at the end of the day, we are here to win a ring — not trophies,” Henigan said.

Ryan will begin that chase when it hosts Dallas Bryan Adams in the first round at 7 p.m. next Friday.

Friday’s game against Lone Star was a rematch of last year’s 5A Division I state semifinal, a game Ryan won 35-7. This time, Ryan (9-0, 7-0 district) jumped out to two 14-point leads only to see Lone Star fight back each time. The Rangers (5-3, 5-1 district) were outgained 421-150 on the night and trailed 14-0 nine seconds into the second quarter but benefited from a slew of Ryan penalties and a costly turnover with 4:29 left in the half.

Those two scores tied the game at 14 going into intermission.

Ryan came out on fire to start the second half, though.

Three plays into his team’s opening possession, Henigan found Bowman over the middle of the field for a 76-yard touchdown. After a Lone Star punt, Henigan again moved the Raiders back down the field in three plays, this time finding Sanders for another touchdown. On the play, Henigan lofted a pass into the corner of the end zone. Sanders, a five-star recruit who is committed to Texas, reached up and snared the pass with one hand to extend Ryan’s lead to 28-14. Sanders finished the night with 80 receiving yards and the one touchdown.

“I had told Seth and everyone beforehand that I was going to do that,” Sanders said. “So, when he called the play to me, I thought, ‘Oh yeah, it’s about that time.’ I went up, saw it, and it went right in the hand. Easy money.”

“He made an amazing catch. You’ll probably see that on SportsCenter soon,” Henigan said.

Even with those two quick gut punches, Lone Star wasn’t done. Nixon, who finished with 38 rushing yards, scored his second touchdown of the night on a 1-yard run with 48 seconds left in the third to trim the deficit to 28-21.

That was the last time Lone Star touched the ball with any significant time on the clock. Ryan engineered a 20-play touchdown drive that bled into the fourth quarter and chewed nearly nine minutes off the clock.

Ke’Ori Hicks capped the drive with a 4-yard touchdown catch from Henigan.

“Championship drive,” Ryan coach Dave Henigan said. “Twenty plays, back against the wall, one-score game, got to go down and score or eat up clock — championship drive. Big third-down conversions, too. That was big time from our offense to go close the game out.