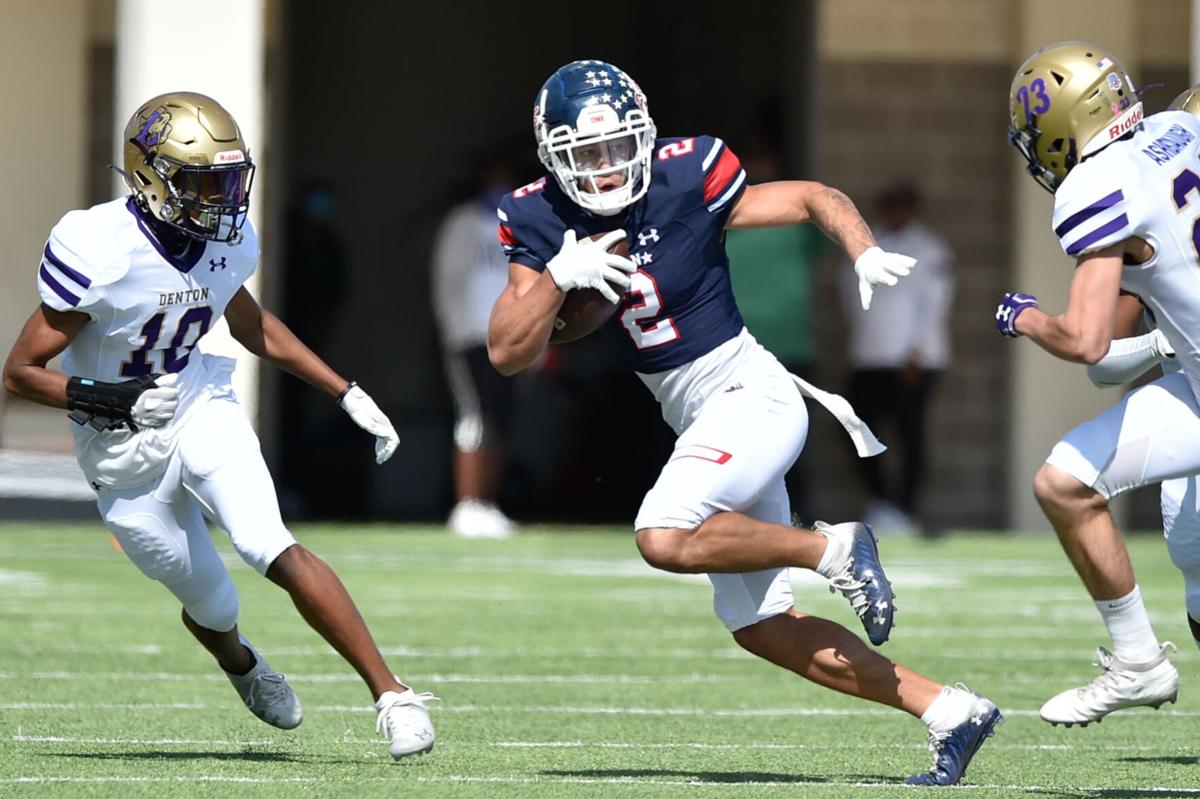 Ryan’s Billy Bowman Jr. (2) returns a kick while being chased down by the Denton defense on Saturday. 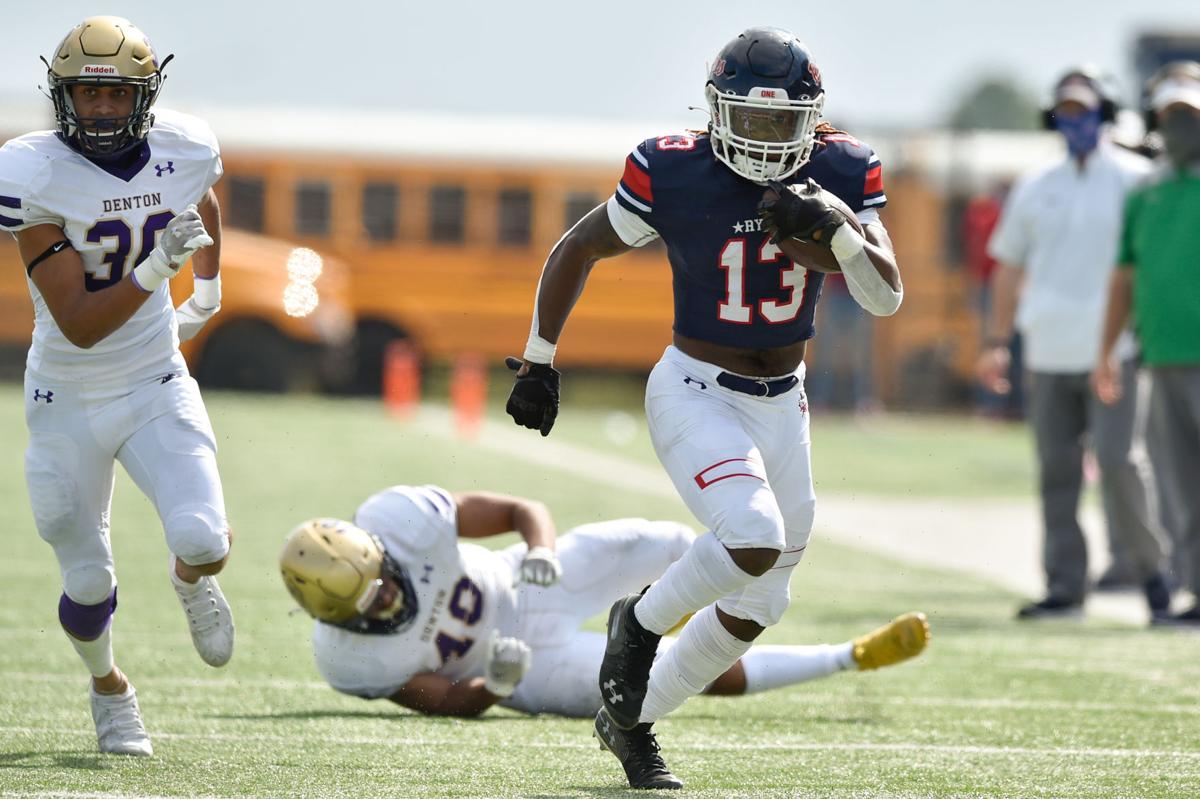 Ryan running back Ke’Ori Hicks (13) carries the ball and scores a touchdown against the Denton defense in Saturday’s rivalry game at C.H. Collins Athletic Complex. 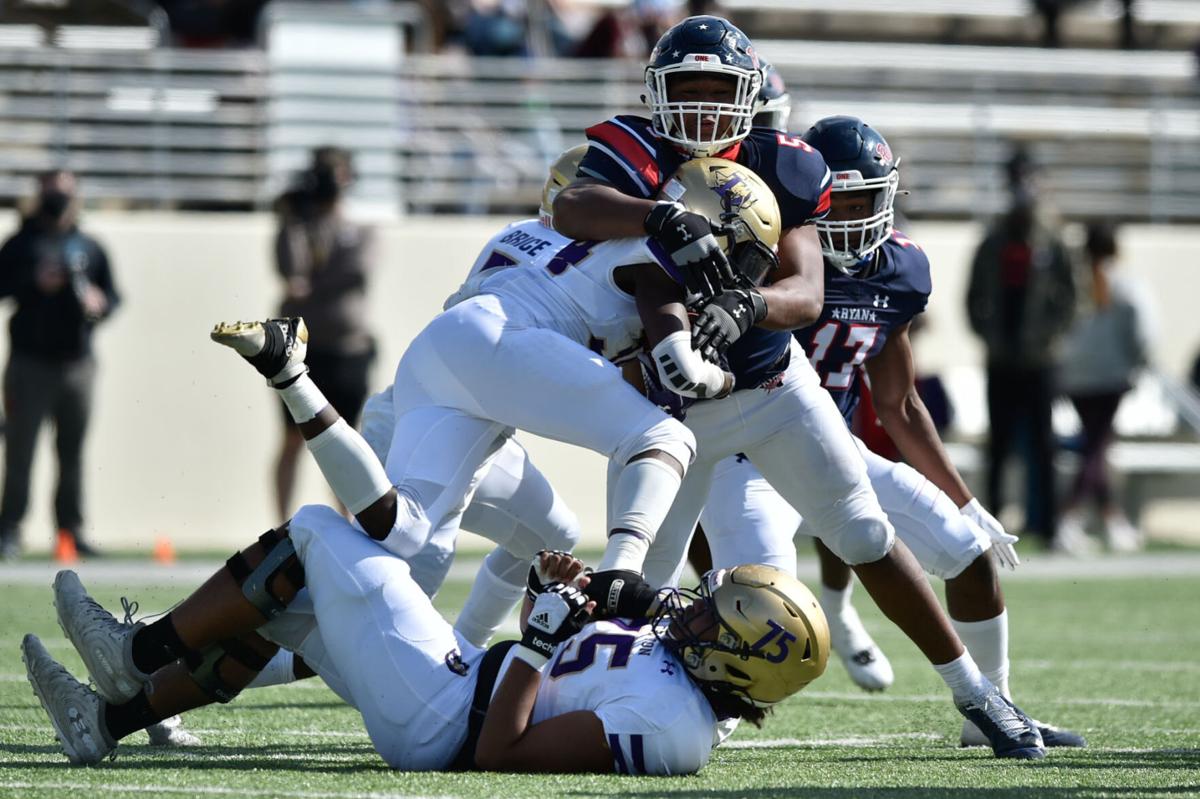 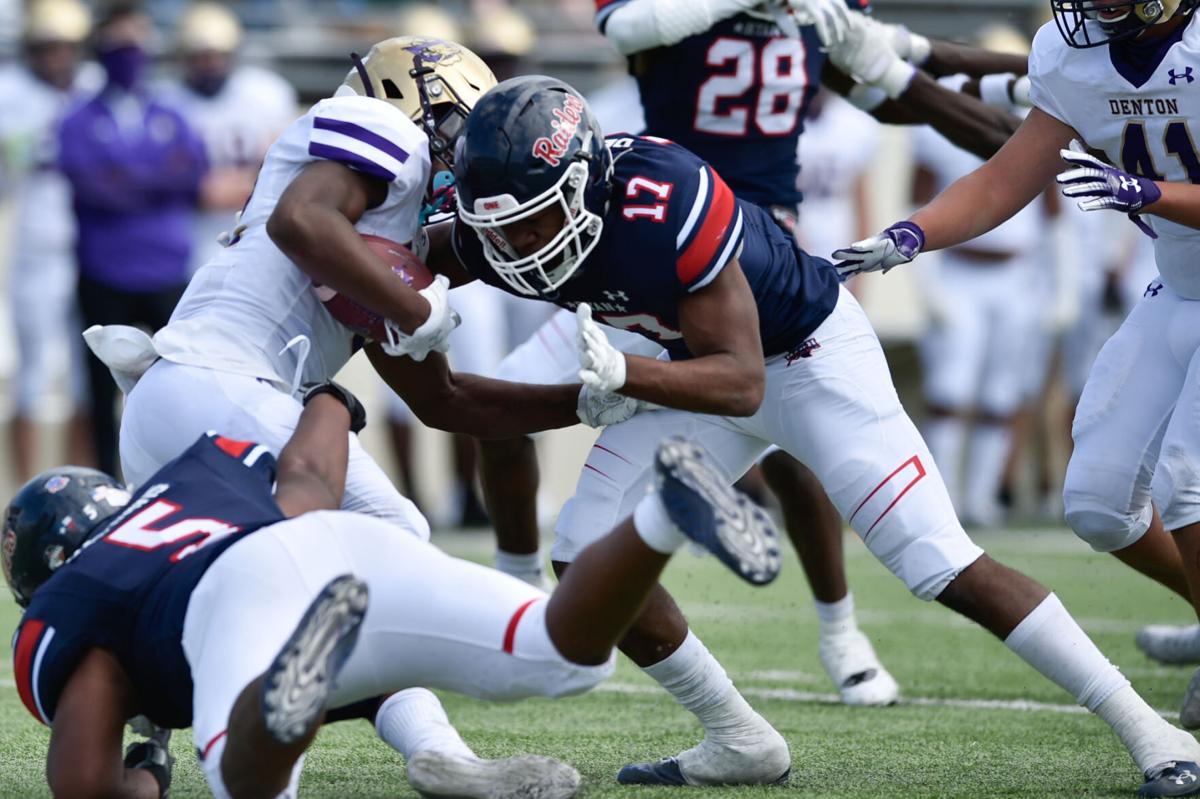 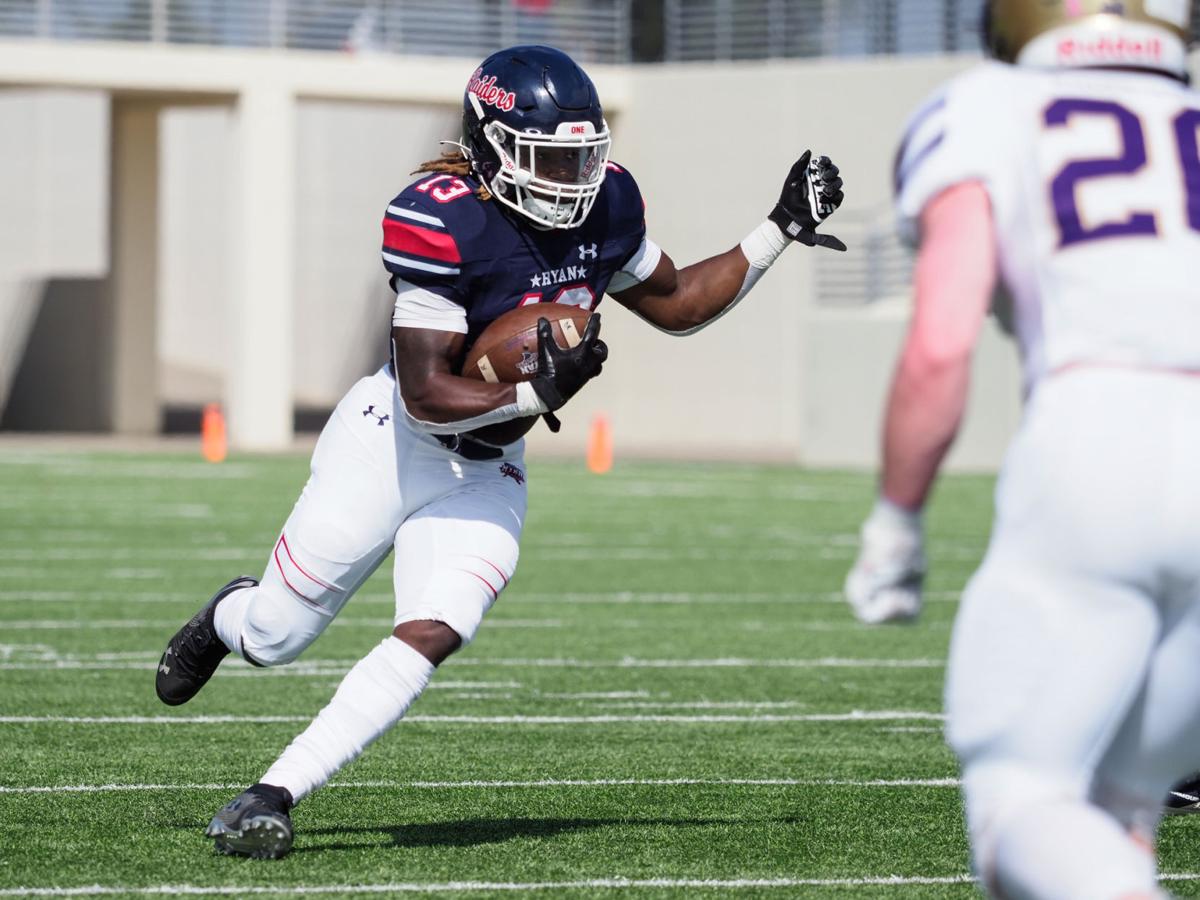 Ryan running back Ke'Ori Hicks (13) carries the ball and scores a touchdown against the Denton defense at C.H. Collins Athletic Complex, Saturday, Oct. 17, 2020, in Denton, Texas.

Ryan’s Billy Bowman Jr. (2) returns a kick while being chased down by the Denton defense on Saturday.

Ryan running back Ke’Ori Hicks (13) carries the ball and scores a touchdown against the Denton defense in Saturday’s rivalry game at C.H. Collins Athletic Complex.

Ryan running back Ke'Ori Hicks (13) carries the ball and scores a touchdown against the Denton defense at C.H. Collins Athletic Complex, Saturday, Oct. 17, 2020, in Denton, Texas.

After 14 days without playing a game due to COVID-19 and having only one practice less than 24 hours before their district opener on Saturday, the Ryan Raiders were bound to show signs of rust.

And they most certainly did at times. But an offensive explosion in the second quarter and three Denton turnovers made everything look a whole lot better for the Raiders when the clock hit zero, as they flipped what was a tight rival game into a 41-0 rout at C.H. Collins Athletic Complex.

That surge included two scores in a three-second span. Ke’Ori Hicks finished the game with 65 rushing yards and two touchdowns while Kalib Hicks added 67 yards on the ground and a receiving touchdown in relief. Seth Henigan threw for 160 yards and a touchdown.

“We were definitely rusty, particularly on offense. Turning guys loose and busting protections — that’s what happens when you don’t have enough practices,” Ryan coach Dave Henigan said. “But [Denton] played hard, and the wind was a factor. When we got the wind, we scored a bunch of points.

“We kept it simple. We just wanted them to play hard and see what happens.”

The game started as a defensive showcase. Denton thwarted two of Ryan’s first three drives and only trailed 7-0 after the first 12 minutes. But as Ryan started heating up, the Broncos’ offense did nothing to give its defense a break. By halftime, Denton had managed negative 2 yards.

Ryan’s defense forced 17 tackles for loss in the game, including an unofficial five sacks.

“I want to start off by giving a shoutout to Terell Coleman for holding one of the top two receivers in the state to one catch for four yards. I can’t say enough about that kid,” Denton coach Billy Miller said. He was referring to Texas pledge and Ryan senior Ja’Tavion Sanders, who was ultimately ejected in the first half after two unsportsmanlike conduct penalties. “The defense as a whole played lights out in the first quarter. I know Ryan was a bit rusty, but at the end of the day, our defense shows up at the most important times. We couldn’t get a first down, and that makes it difficult no matter how hard you play.

“We have to be able to move that football. We didn’t today.”

Ryan broke the game open quickly in the second quarter as Seth Henigan found Michael Davis for a 77-yard touchdown with 10:18 left in the half. The score came one play after Denton was forced to punt the ball and gave Ryan a 14-0 lead. Denton then fumbled on its next possession, eventually leading to Ke’Ori Hicks’ second touchdown run of the game with 7:20 left.

On the ensuing kickoff, Denton’s return man touched the ball as it slipped through his hands and into the end zone. Ryan’s MarQuice Hill Jr. recovered it for another Ryan touchdown.

With Ryan’s starters on the bench, the second team engineered a five-play drive to close out the half, capping it with a 10-yard touchdown pass from Khalon Davis to Kalib Hicks.

Ryan scored once in the second half on a five-yard run by Davis with 8:13 left in the third quarter.

“It was very difficult for us to come back and play this game with one day of practice. We knew we had to get mentally ready. It took us a while, but we got it all together,” Ke’Ori Hicks said. “We knew we had to come out here and play hard regardless.”

Saturday’s win pushed the Raiders’ record in the all-time series against Denton to 17-3. It also gave Ryan its 53rd straight regular-season win after a drama-filled week where that streak was nearly ended by forfeits. Ryan’s COVID-19-related canceled game against Frisco Reedy was eventually ruled a no-contest by the District Executive Committee for 5-5A DI, and the game against the Broncos was moved from Friday to Saturday to accommodate Ryan’s quarantine being lifted late Friday.

Ryan has a quick turnaround against Frisco Wakeland on Thursday.

“We are going to enjoy this one today,” Dave Henigan said. “Frisco Wakeland is a very good team and undefeated. It will be a good game.”