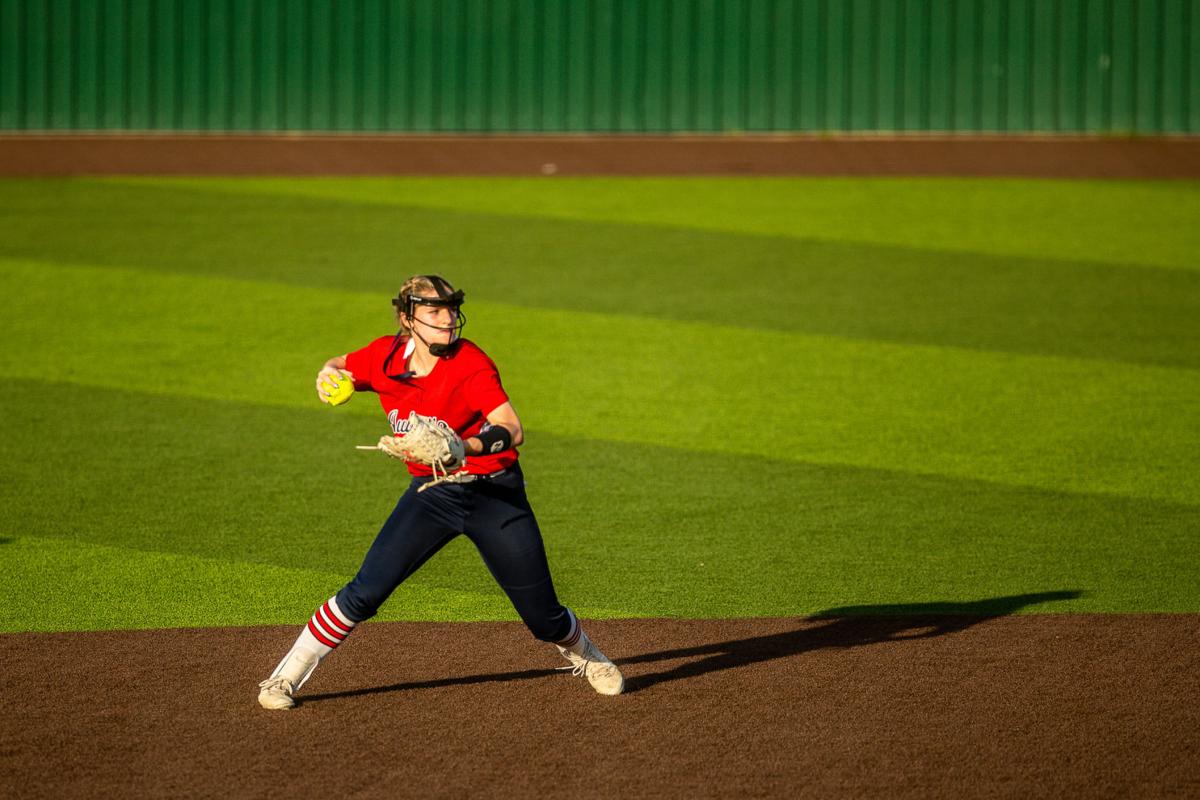 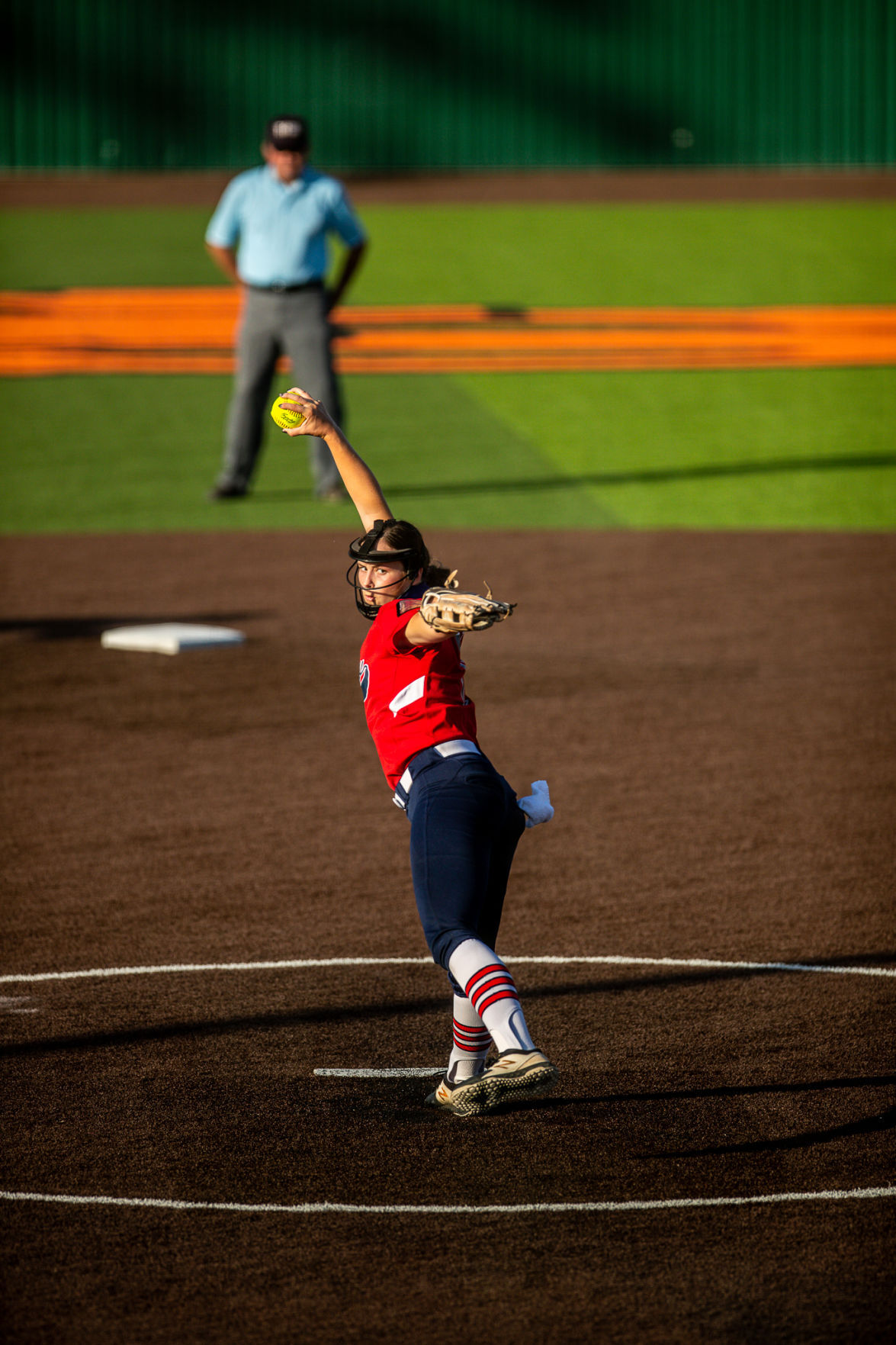 Aubrey pitcher Lauren Trott (11) comes up with a strikeout in the fourth inning of Wednesday’s Game 1 against Bullard in Grand Saline. 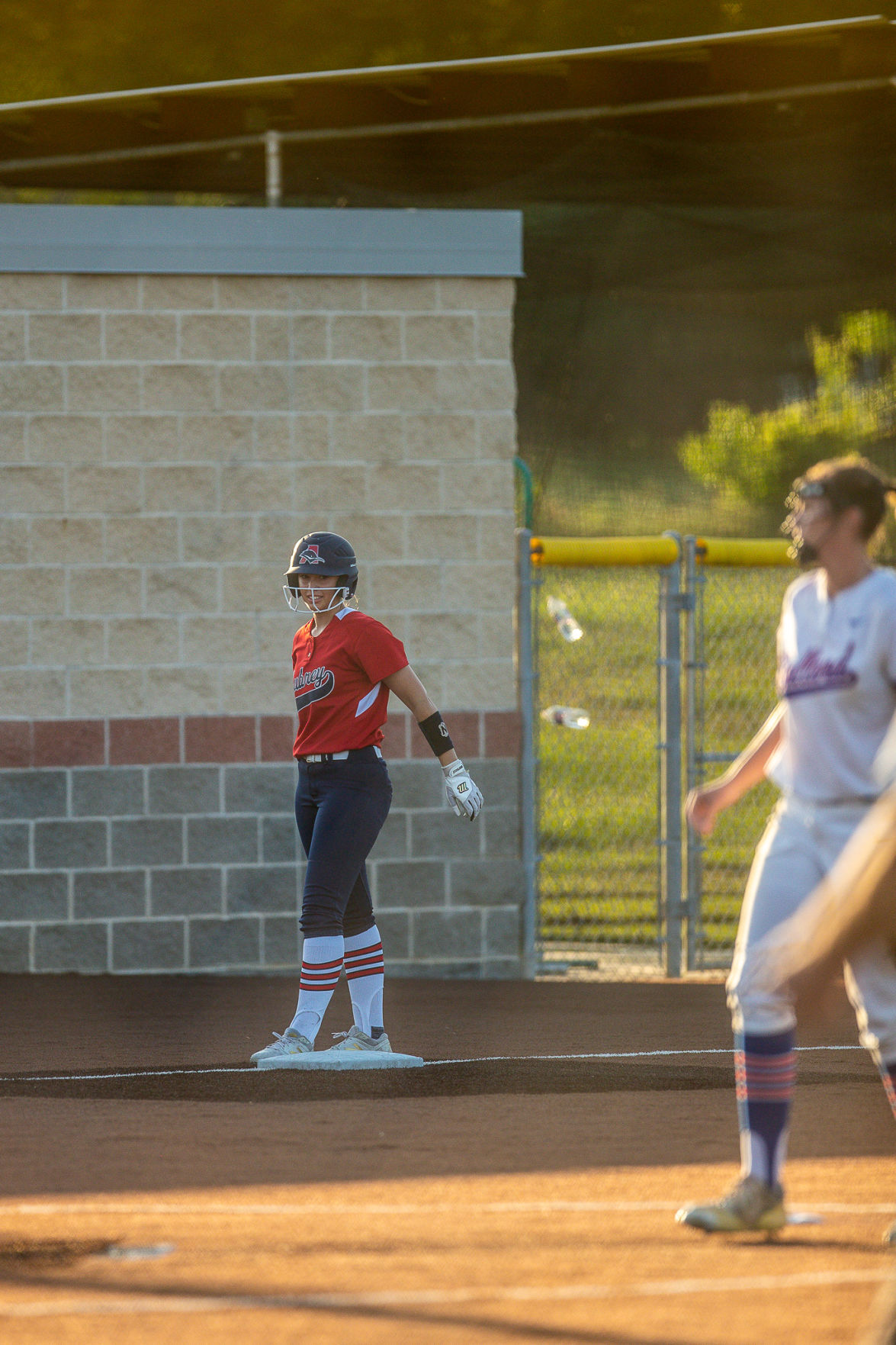 Aubrey's Abby Hammett had an RBI triple to give the Lady Chaps a 2-0 lead over Bullard in the top of the fourth inning Wednesday in Grand Saline. Bullard defeated Aubrey 6-5 in eight innings.

Aubrey pitcher Lauren Trott (11) comes up with a strikeout in the fourth inning of Wednesday’s Game 1 against Bullard in Grand Saline.

GRAND SALINE — Bullard moved one step closer to advancing to the state softball tournament for the first time, and it needed extra innings to do so.

Claire Cannon’s RBI single in the bottom of the eighth scored Addison Hooker from second base to give Bullard a 6-5 win over Aubrey on Wednesday night in Game 1 of a Class 4A Region II final series.

“She had thrown many first-pitch strikes, so I was in the box ready to hit it,” Cannon said. “I went in knowing I had to move Addison, and that’s what I did.”

Hooker battled to lead off the bottom of the eighth, fouling off multiple pitches with two strikes before delivering a double down the left-field line. Cannon then stepped in and took the first pitch past the glove of the second baseman into right-center field to give Bullard the win.

“I thought it was a heck of a battle,” Bullard coach Julie Murry said. “Two great softball teams battled it out today, but I’m really proud that we came out on top.”

Aubrey grabbed the lead early as Lauren Trott led off the game with a single, moved to third on two passed balls and scored on an RBI groundout by Emma Spears.

Bullard freshman Anistyn Foster struck out all six batters she faced in the second and third innings. Bullard led off the bottom of the third with a single from Kylie Pate, but Aubrey turned an inning-ending 4-3 double play to keep a 1-0 lead.

In the bottom of the fourth with one out, Gabby Nichols singled and then scored as Hooker singled and Aubrey’s throw got away at first base. Cannon then delivered an RBI double to tie the game. Teagan Graul followed with an RBI double to give the Lady Panthers the lead, and Pate drove in Graul with two outs to stretch the lead to 4-2.

Aubrey answered with three runs in the top of the fifth as the Lady Panthers committed two errors. Trott had an RBI single, and Brynlie Dunkin had a sacrifice fly to bring in the go-ahead run.

Hooker showed off her glove in the top of the sixth with a diving catch in foul territory for the first out.

Kenzie King came through with an RBI single with two outs in the bottom of the sixth to tie the score.

In the bottom of the seventh, Bullard’s Berlyn Grossman and Kaylee Paul had one-out singles. Nichols hit a grounder to second, and Spears turned her second inning-ending 4-3 double play to force extra innings.

Aubrey got a runner to second with one out in the eighth. Foster struck out Lexi Kendrick and then got Bree Jones to pop out to King at first for the third out.

“We’ve been in this position three times now just in the playoffs, so none of us were worried,” Cannon said. “We were relaxing and were like just be us, and that’s what happened.”

Cannon, Nichols, Hooker and Pate all had two hits for Bullard (29-4).

Foster struck out 10 batters in the circle.

Trott and Dunkin had two hits each for Aubrey. Trott pitched the entire game and struck out three batters.

Game 2 of the series will be at 2 p.m. Friday at Grand Saline.

BRANDON OGDEN can be reached at bogden@tylerpaper.com.