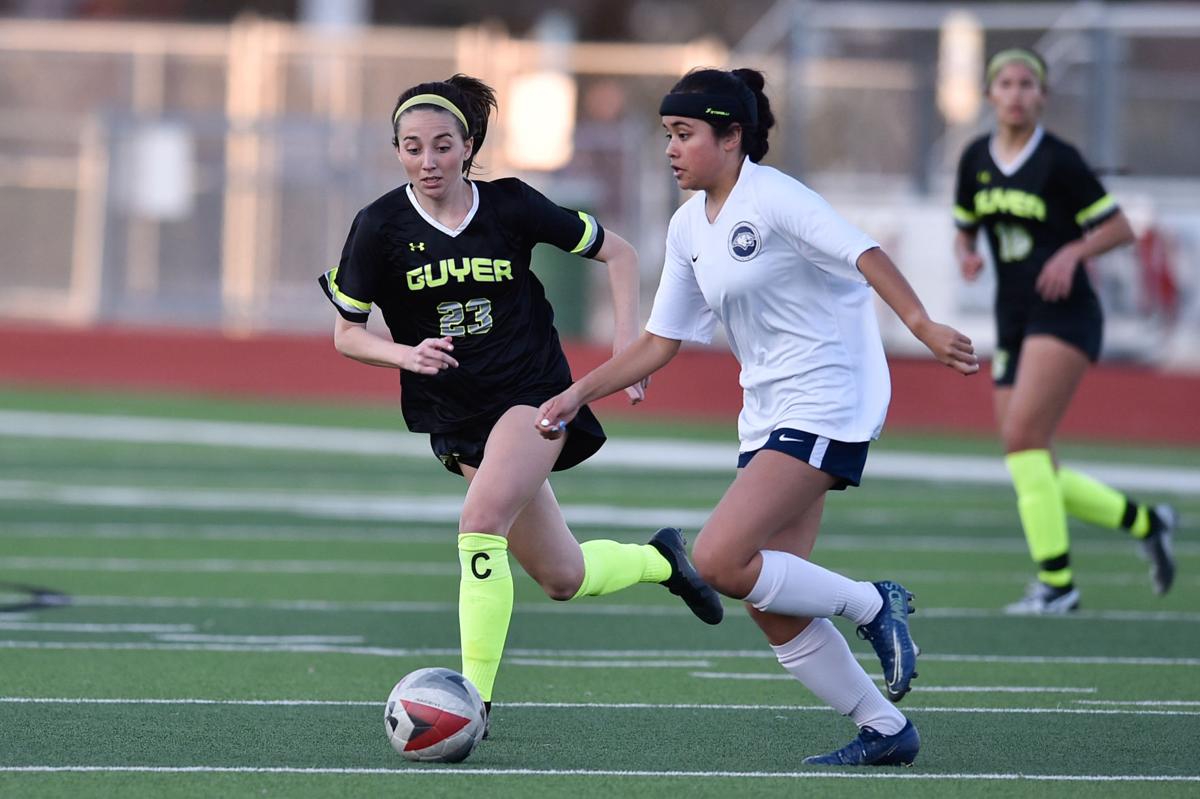 Guyer’s Olivia Ramirez (23) and Flower Mound’s Skye Leach chase after the ball on Thursday at Marcus High School in Flower Mound. Ultimately, the Lady Wildcats fell to the Lady Jaguars during the bi-district round game. 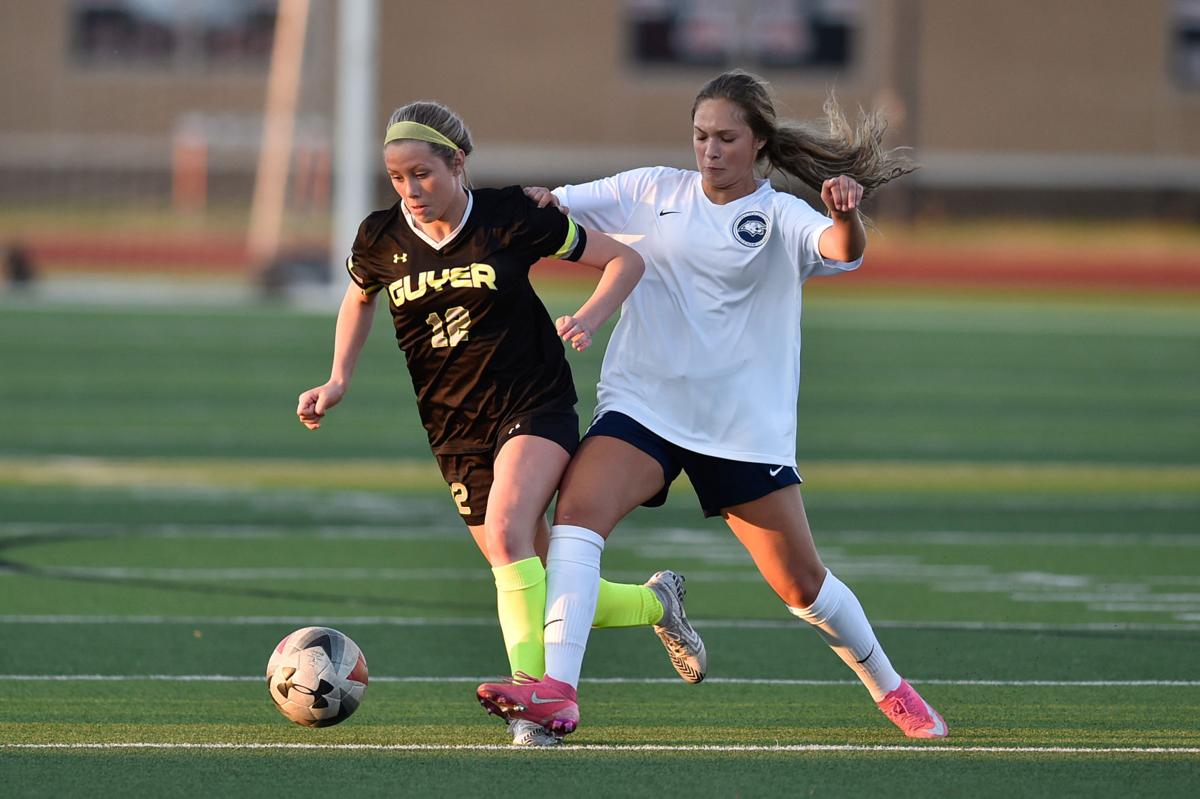 Guyer's Madeleine Landstad (12) dribbles the ball while being defended by Flower Mound on Thursday at Marcus High School. 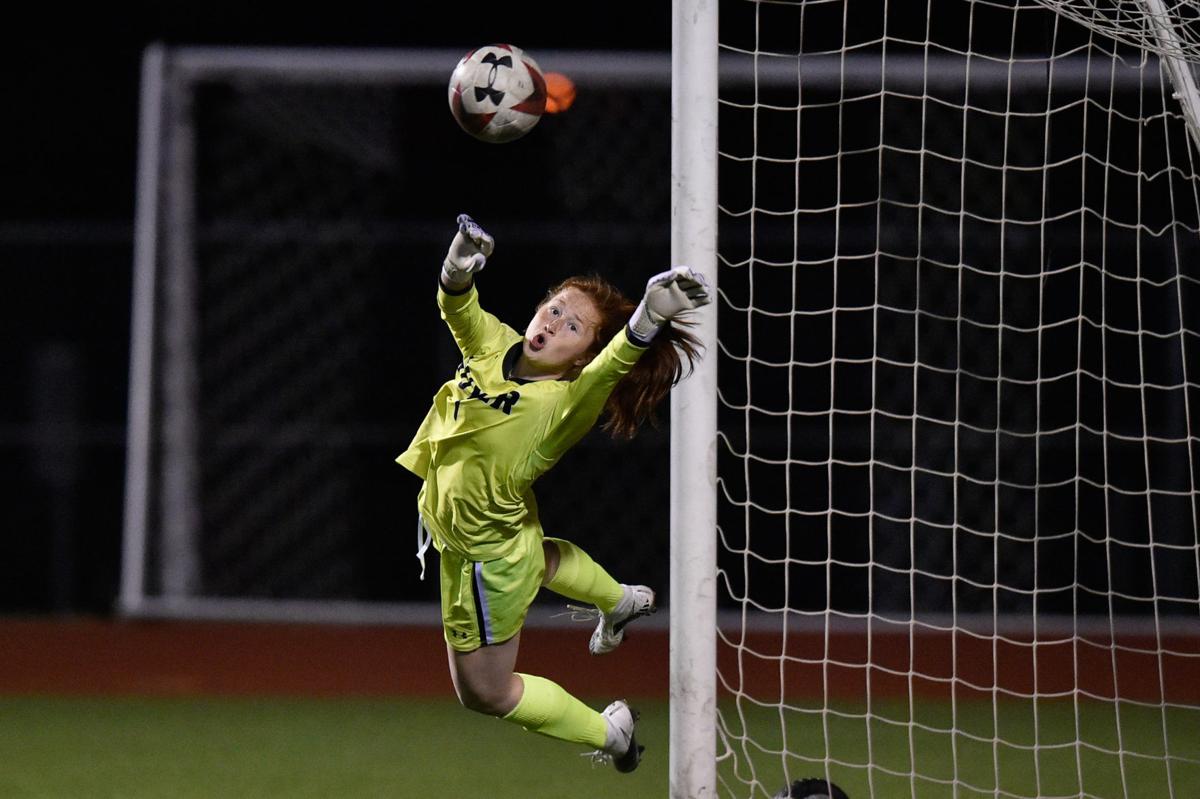 Guyer’s Allie Dellis blocks and saves a shot on goal by Flower Mound at Marcus High School on Thursday. 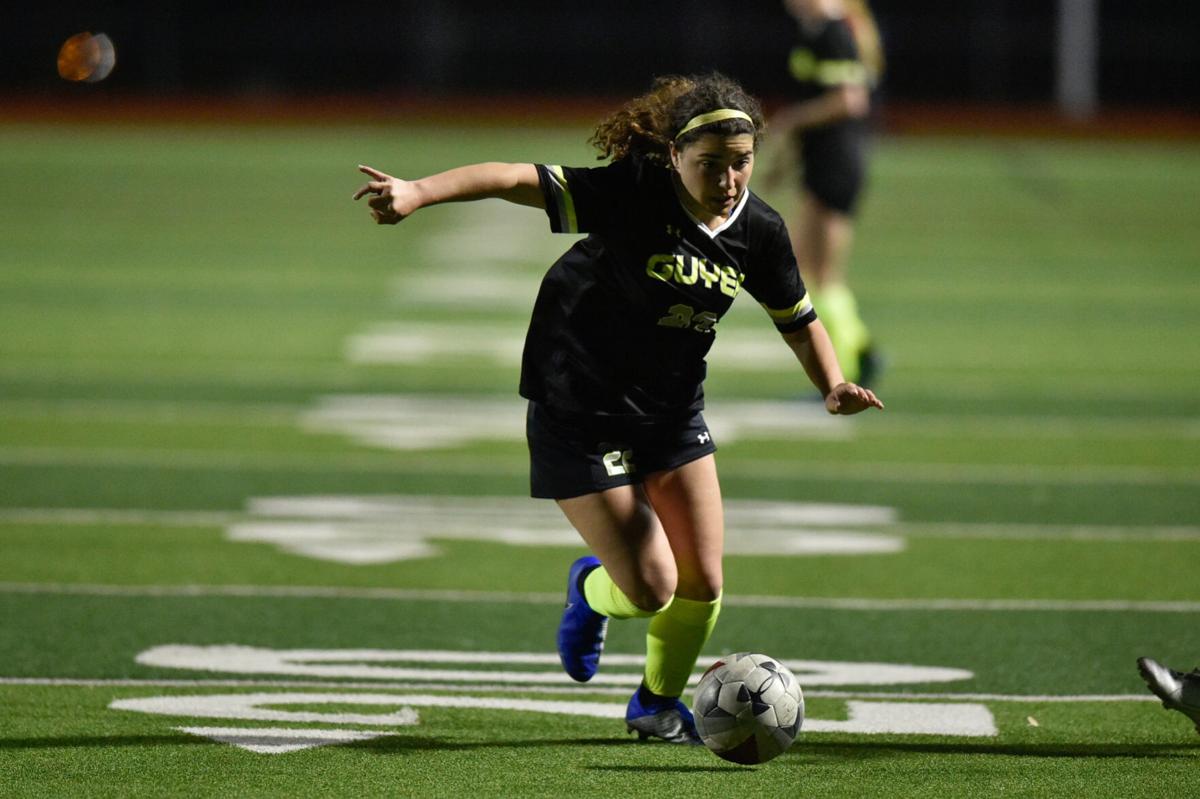 FLOWER MOUND — Guyer gave No. 8-ranked Flower Mound all it could handle on Thursday night.

Tied at 1-1 for most of the second half, both sides traded opportunities looking for the go-ahead goal.

The Lady Wildcats’ defense had bent but not broken all game, but in the 68th minute, Flower Mound’s Sydney Becerra made a move in the box before curving a shot into the back of the net.

Becerra’s goal in the waning moments proved to be the difference, as Flower Mound escaped with a 2-1 win in the Class 6A Region I bi-district round at Marauder Stadium.

“Even though the game didn’t go our way, we were battling,” Guyer coach Mandy Hall said. “They’re a good team and are very well-coached. We were able to stick in it until the end. We had chances in the last five minutes. I’m just really proud of how the girls came out, competed and stuck together. They really just battled through all the unknowns of this year to put ourselves in a position to even be able to play this game.”

Flower Mound took an early 1-0 lead in the the 13th minute, but Guyer was quick to respond.

Just before halftime, Trinity Cox made a run but was taken down by a Lady Jaguar defender in the box. Guyer was given a penalty kick, and Olivia Ramirez calmly deposited her shot into the bottom left of the net to tie the game at 1-1.

Hall said from that point on, the nerves were gone.

“We have a team where only three of our kids have ever played in a playoff game because last year was taken away,” Hall said. “Of course there are jitters, but when you see that settle in, all that is wiped away. We knew we could play at this level, and this was a game we belonged in.”

The Lady Wildcats had several chances in the second half to take the lead, but Guyer was unable to convert on any of its corner kicks.

Flower Mound then started to go on the attack, and had several shots turned aside by Guyer keeper Allie Dellis. The sophomore made a handful of huge saves over the course of the game to keep the Lady Wildcats within striking distance.

“[Dellis] was huge,” Hall said. “That’s a big game, and she’s a sophomore. She’s making saves you see on TV on the weekends. She kept us in the game the whole way.”

But the Lady Jaguars finally broke through Guyer’s back line in the 68th minute, setting the stage for Becerra’s game-winning goal. Becerra made a few nifty moves in the box to free herself for the shot, which went just past Dellis into the net.

“When you have a kid that talented, if you give her a yard of space, she’s going to curve it in the side pocket,” Hall said of Becerra. “It was just a good shot and a good play on their part.”

Guyer had one final chance for an equalizer in the 73rd minute off a cross to Marina Vera, but Flower Mound’s keeper made the save, denying the Lady Wildcats of their bid to level the match.

“It was a great game,” Hall said. “That was a great battle. Unfortunately, it just didn’t go our way. But I think it shows our talent. I’m really proud of them.”