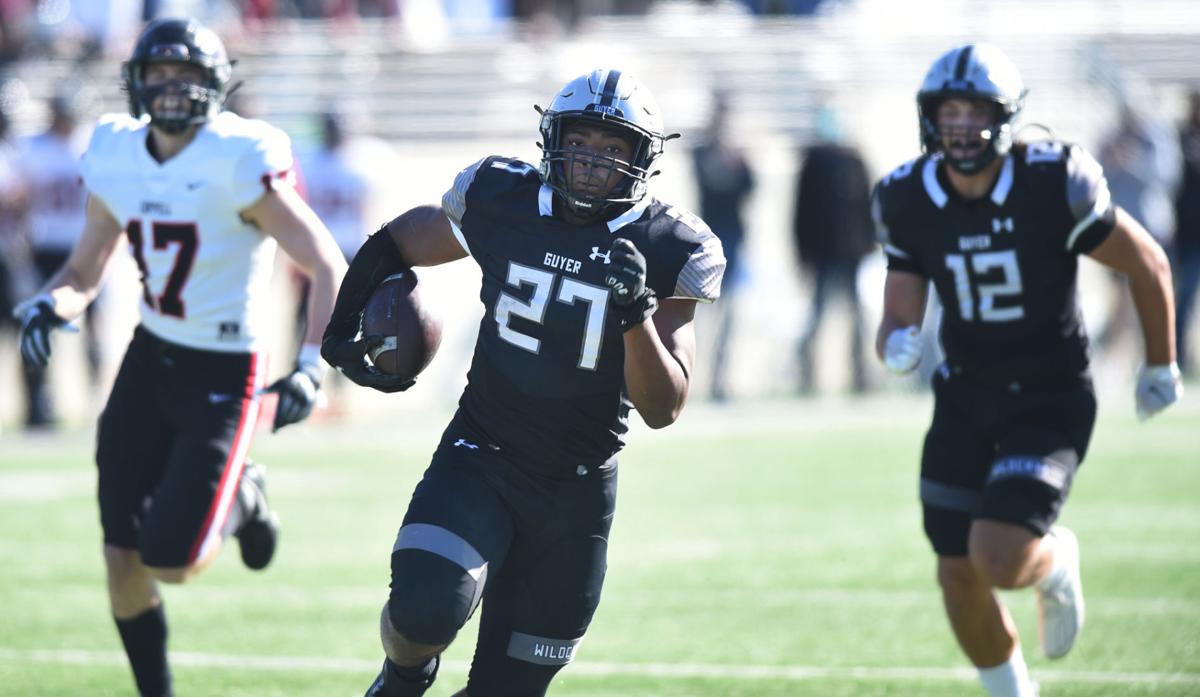 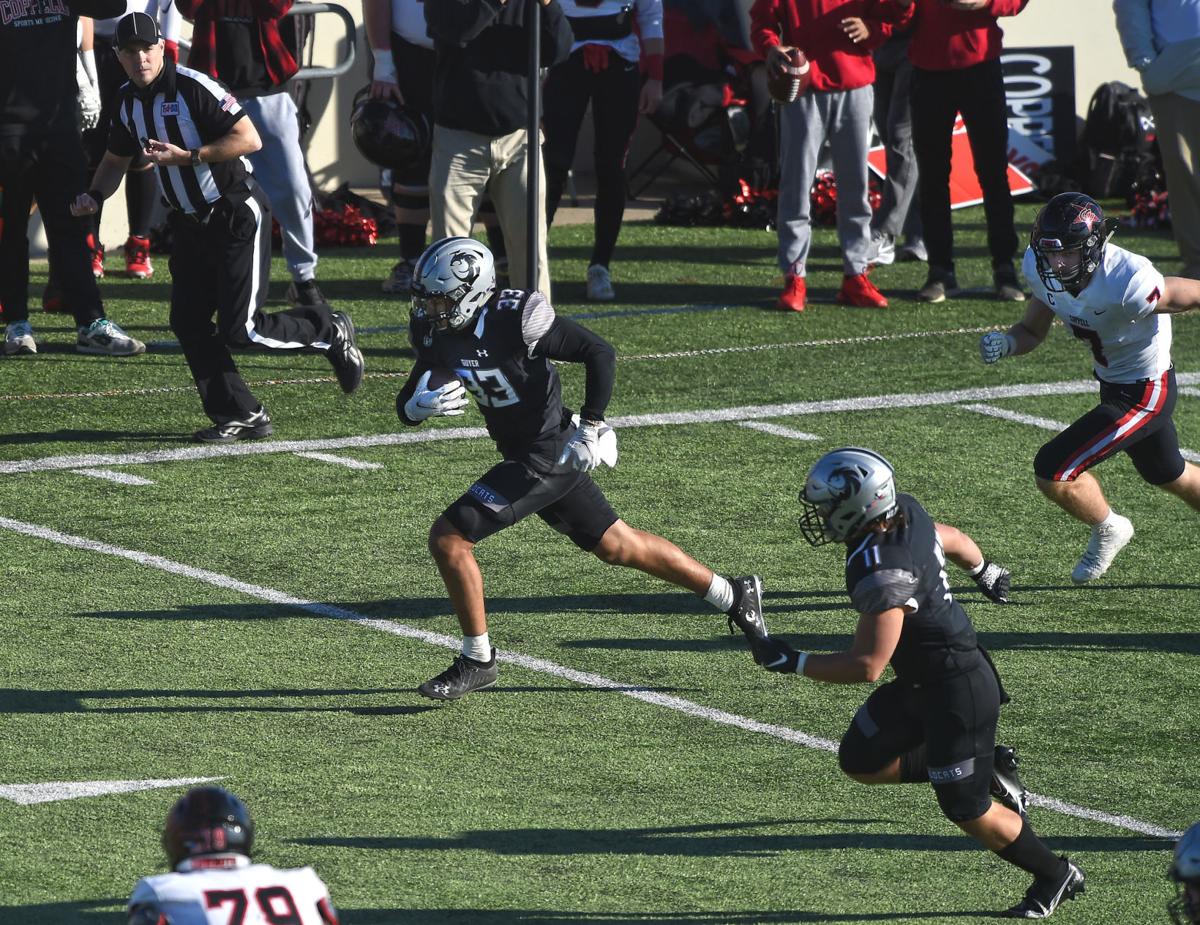 Guyer’s Marquan Pope (33) returns an interception 80 yards for a touchdown during the Wildcats’ win over Coppell on Saturday at C.H. Collins Athletic Complex. 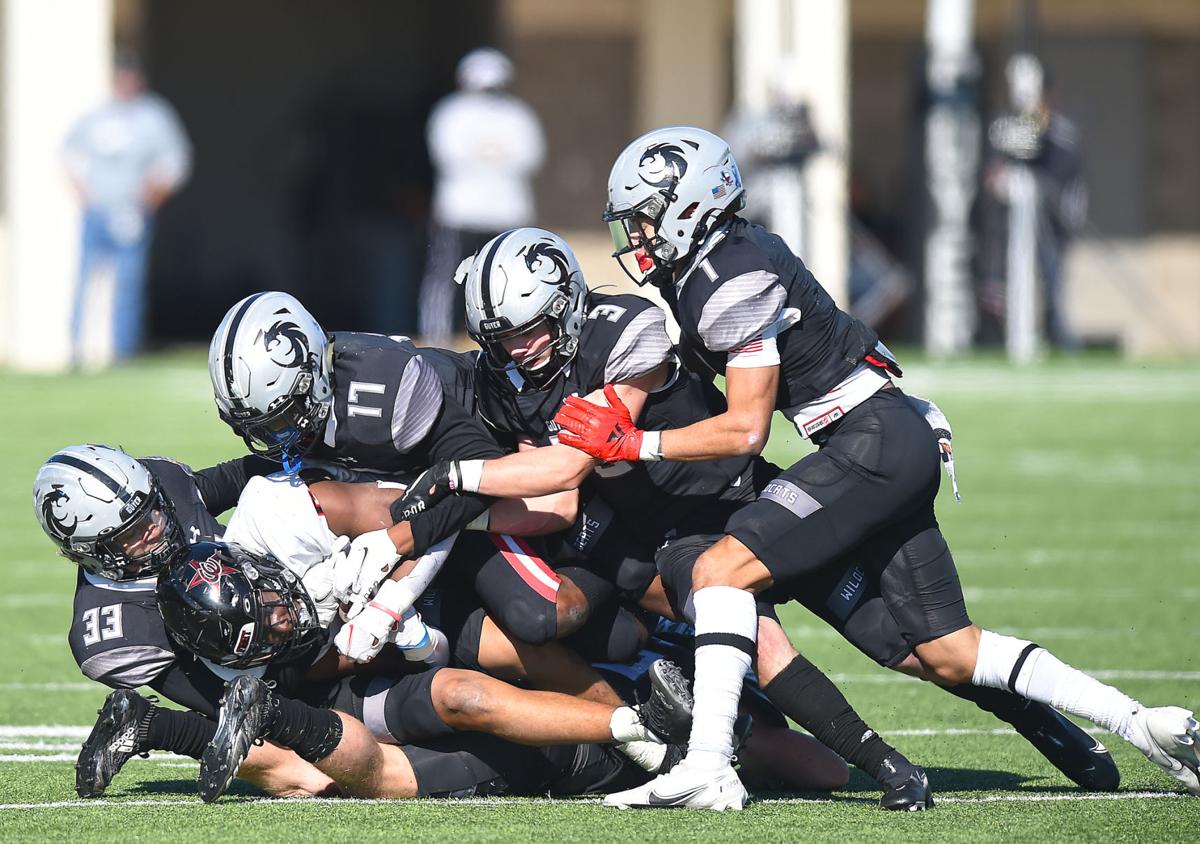 Guyer’s Marquan Pope (33) returns an interception 80 yards for a touchdown during the Wildcats’ win over Coppell on Saturday at C.H. Collins Athletic Complex.

For about a nine-minute stretch on Saturday afternoon, Guyer couldn’t get out of its own way.

The Wildcats led Coppell 24-3 with 8:12 left in the first half and had the game seemingly in hand, but a series of miscues allowed the Cowboys to get back into the game.

Coppell scored 21 straight points to tie the game at 24 early in the third quarter, turning what looked like a blowout into a nail-biter.

“The second quarter is really what set the table,” Guyer coach Rodney Webb said. “I’m thinking it’s about to be 31-3, and the game is going to effectively be over. The next thing you know, it’s 24-17, they get the ball to start the third quarter, and their quarterback had the big scramble.

But as Guyer has done all season, the Wildcats regrouped in a hurry. And they never looked back.

Guyer (8-2) rattled off 28 unanswered points to end the game — fueled by a Marquan Pope pick-six — knocking off Coppell 52-24 to win the Class 6A Division II Region I bi-district title.

“One thing about our kids this year is they have the ability to take a deep breath,” Webb said. “And we literally do that. It was a very short halftime conversation.”

After surrendering an early third-quarter touchdown that pulled Coppell level at 24, Guyer held the Cowboys scoreless for the remainder of the game.

The Wildcats’ defense bowed up when it mattered most, creating pressure that led to key takeaways.

Both came via interceptions from Pope, but it was his second interception that flipped momentum for good. With Coppell driving in the red zone, Pope jumped in front of quarterback Ryan Walker’s pass and returned it 83 yards down the far sideline for a touchdown.

“It honestly started with great pressure,” Pope said. “Their quarterback had to roll out because Cooper [Lanz] and Rowan [Briggs] got pressure off the edge. I just saw an opening, and I took it. The rest just happened.”

Pope’s pick-six gave Guyer a 38-24 lead moments after running back BJ Phillips scored his third touchdown of the afternoon to put the Wildcats back in front 31-24.

“It was yards after contact today,” Webb said. “We did a really good job blocking up front, but [Phillips] got hit after three or four yards and got seven or eight. He was constantly finishing plays. It’s just brutal, and there’s not much you can do about that.”

The Wildcats racked up 400 yards on the ground and 556 total yards.

Webb said afterward it was the first time this year that Guyer has played with all five members of its starting offensive line. Charlotte commit Knox Boyd returned after missing the previous four games due to injury.

“We got into the jumbo deal almost the whole second half, and we gave them what I like to call the chloroform treatment,” Webb said. “We just took the air out of the ball.”

With the victory, Guyer advances to the 6A Division II Region I area round and will play Arlington.

Webb said that game is slated for 3:15 p.m. next Saturday at Globe Life Park.