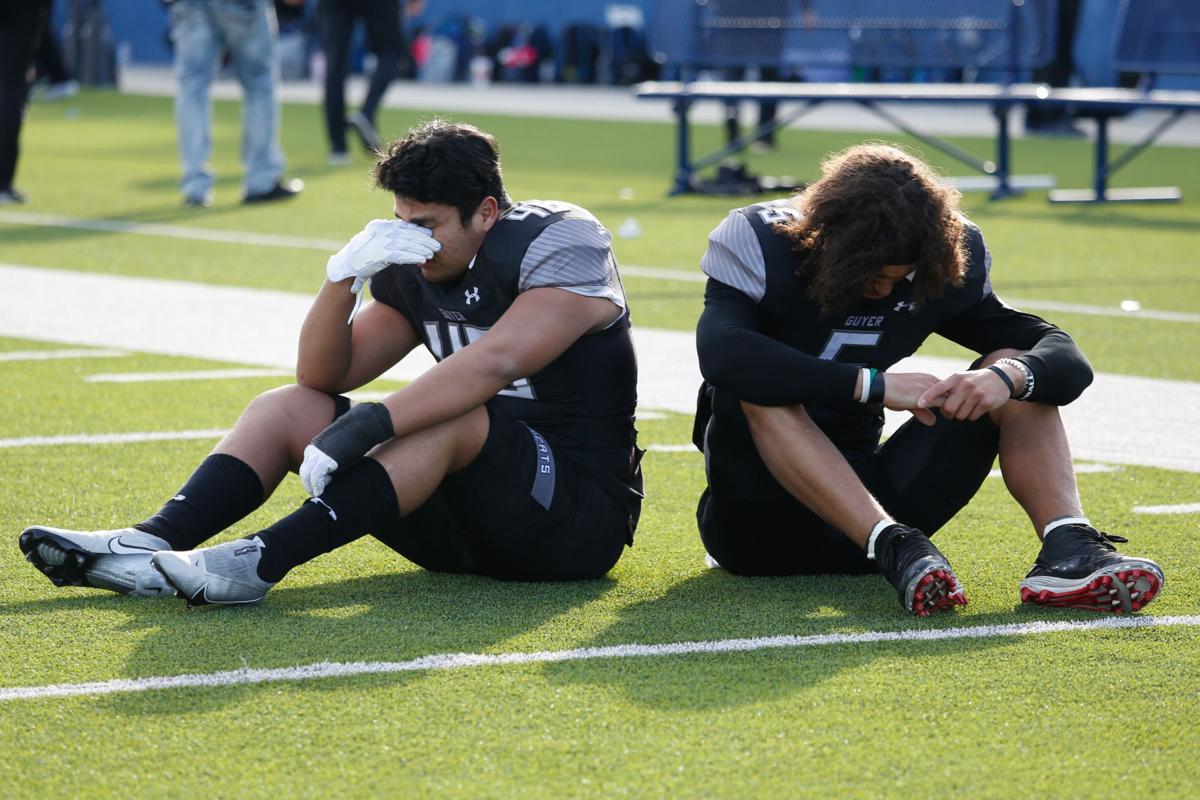 Guyer’s Dylan Rivero (46) and Jace Wilson (5) put their heads down after the Wildcats were defeated by Cedar Hill in Saturday’s Class 6A Division II semifinal at McKinney ISD Stadium. 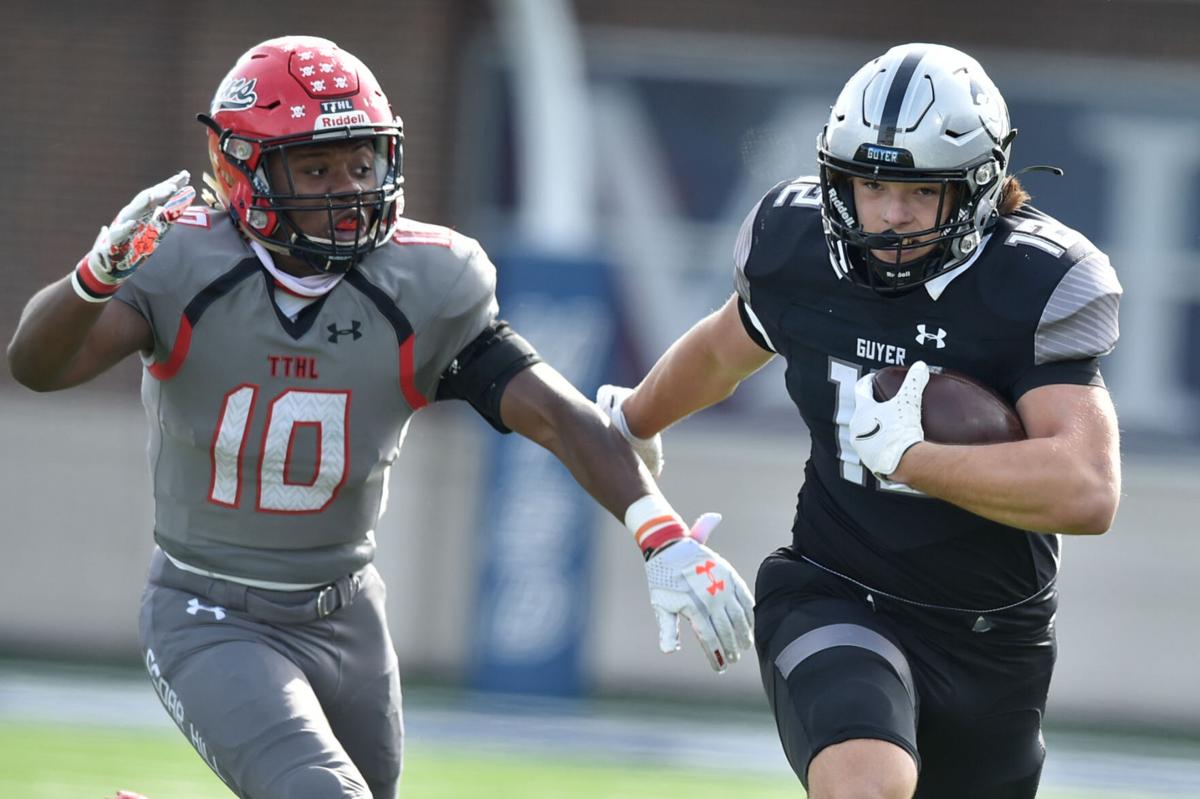 Guyer’s Si Stovall (12) catches a pass and is tackled by Cedar Hill’s Jaheim Lowe (10) during a semifinal game Saturday at McKinney ISD Stadium. 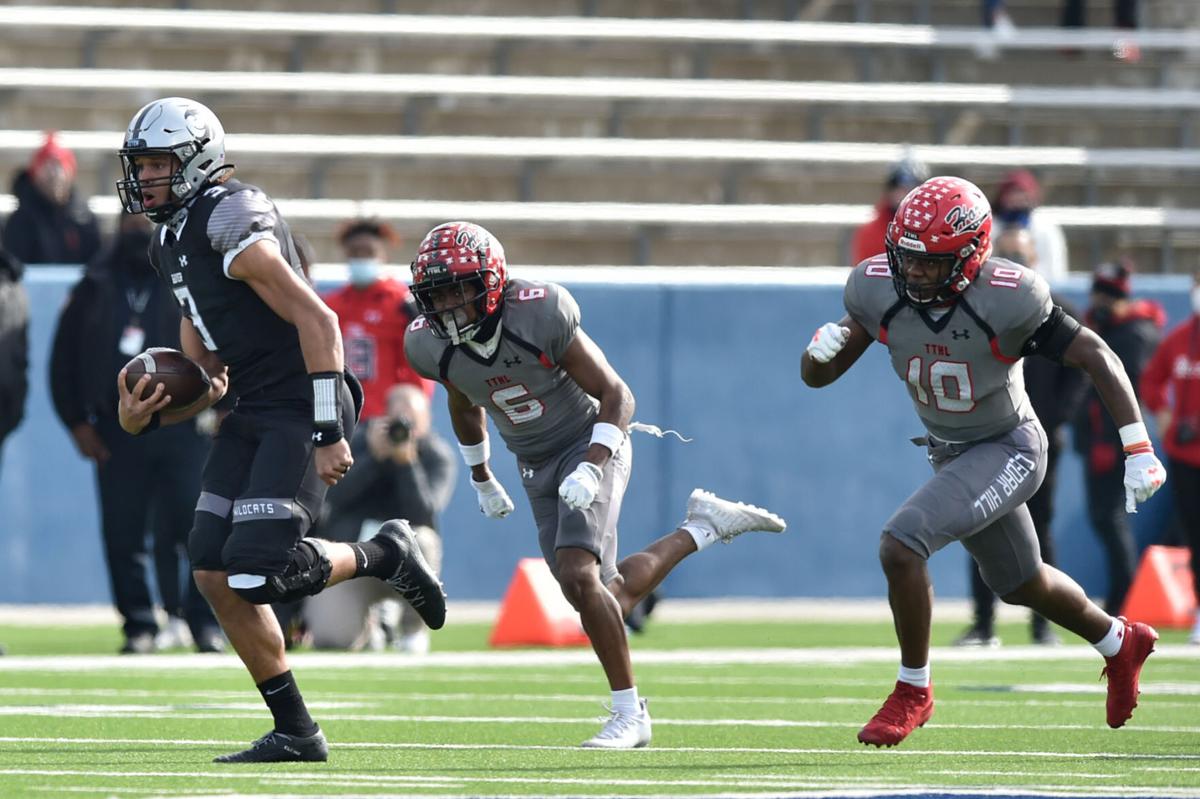 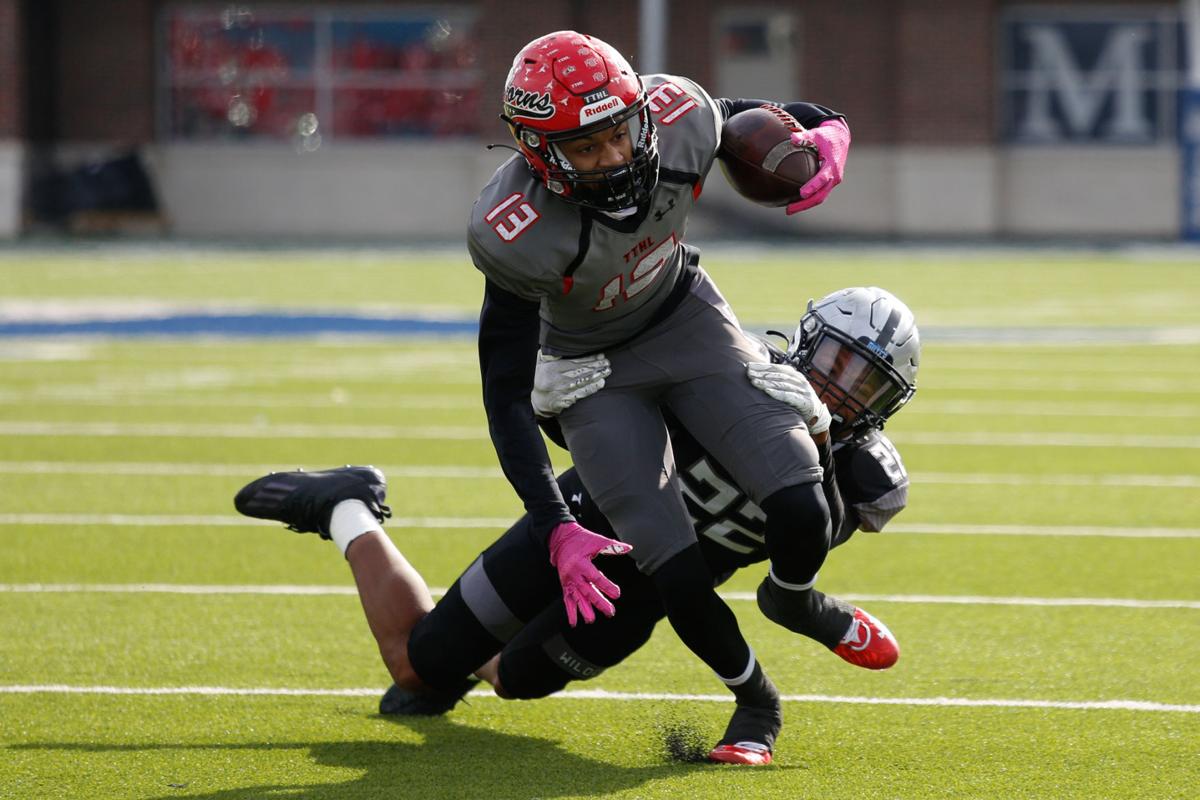 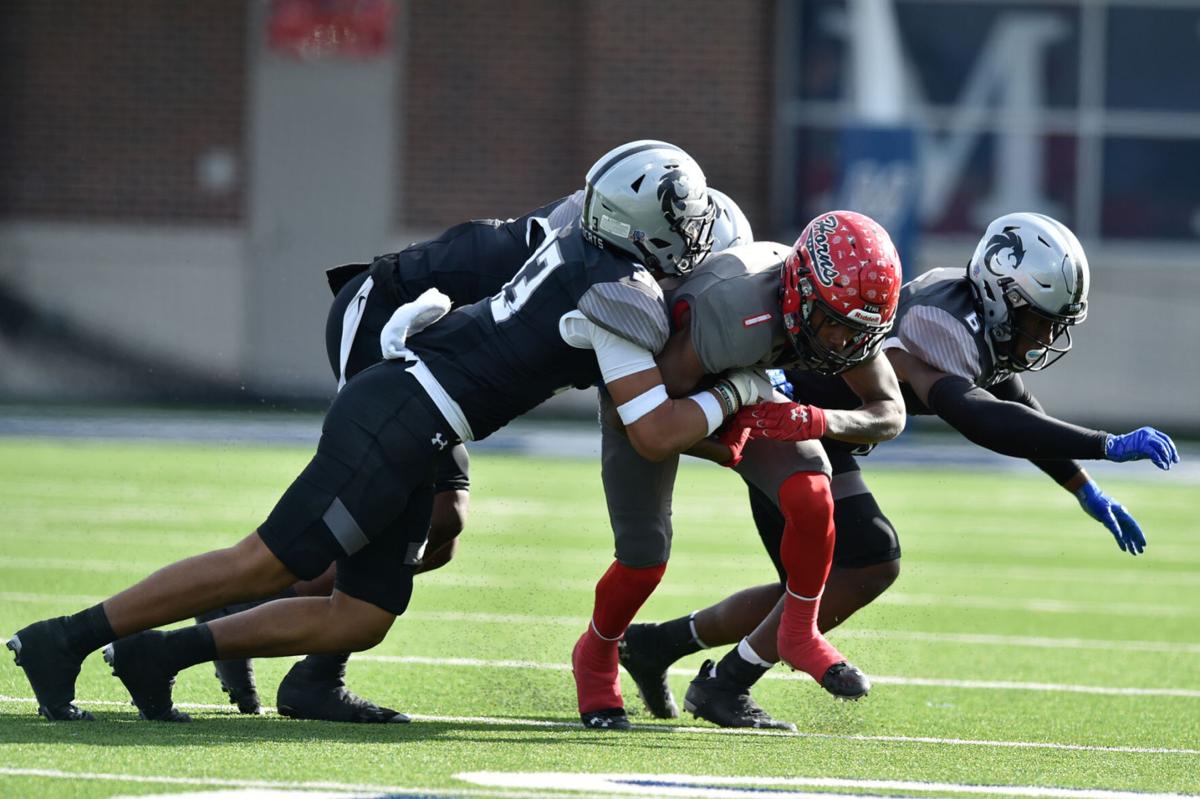 Guyer’s Dylan Rivero (46) and Jace Wilson (5) put their heads down after the Wildcats were defeated by Cedar Hill in Saturday’s Class 6A Division II semifinal at McKinney ISD Stadium.

Guyer’s Si Stovall (12) catches a pass and is tackled by Cedar Hill’s Jaheim Lowe (10) during a semifinal game Saturday at McKinney ISD Stadium.

McKINNEY — When Guyer rallied from down 27 to stun Cedar Hill in the playoffs last season, it was a flurry of onside kicks that turned the tide for the Wildcats.

So, perhaps it was only fitting that over one year later, with a trip to the state championship on the line, it was the kicking game that was again responsible for a momentum swing.

Except this time, it wasn’t for the Wildcats.

After Cedar Hill scored to go up 14-10 in the second quarter, Guyer failed to recover the ensuing kick, giving the ball right back to the Longhorns. Cedar Hill quarterback Kaidon Salter made the Wildcats pay — and Guyer never recovered.

Salter and the Longhorns found the end zone again before halftime to take a two-possession lead and never looked back, as Guyer fell 27-17 in the Class 6A Division II semifinal at McKinney ISD Stadium.

“That was definitely a crucial moment in the game,” Guyer quarterback Eli Stowers said of the miscue on the kickoff. “But I think regardless of if that happened or not, there were things we could have hit on both sides of the ball that affected our game and [resulted] in us losing it.”

The Wildcats end the season 11-3 overall, coming up one win short of getting back to the state championship game for the second consecutive year.

One of the reasons Guyer failed to come away with the win on Saturday was its inability to get Cedar Hill’s offense off the field. The Longhorns racked up 23 first downs and 361 total yards, going on several methodical drives that ended with points.

“I think a lot of people today probably got frustrated by our inability to get them off the field,” Guyer coach Rodney Webb said. “But what everybody has to understand is they are one of the most dynamic offenses in Texas. If you start rolling the dice, you start giving up huge plays.”

Cedar Hill’s opening drive of the game was a 10-play march down the field that ended with a 1-yard run from Salter to put the Longhorns up 7-0.

But the Wildcats promptly answered, with Stowers breaking off a 71-yard run to tie the game.

Cooper Lanz then forced the first of his two fumbles, strip-sacking Salter to get the ball back for Guyer. The Wildcats ultimately settled for a 33-yard Michael Mayfield field goal to take a 10-7 lead.

Lanz added another forced fumble in the second quarter, coming around the edge to jar the ball loose from Salter again.

“This whole season, Cooper has made huge strides in his game, and you could tell,” Stowers said. “If there was anybody on the field that didn’t want to lose this game, it was Cooper Lanz. I can’t thank him enough for going out there and playing his tail off. Unfortunately, offensively we didn’t answer on some possessions.”

And it was that, along with the botched kickoff, that was ultimately Guyer’s undoing.

Stowers threw the first of three interceptions on the ensuing drive after Lanz’s second forced fumble, which Cedar Hill turned into a touchdown.

The Longhorns added another touchdown before halftime and then got a field goal early in the third quarter to make it 24-10.

Guyer had one last gasp with a 30-yard touchdown from Stowers to Brody Noble in the fourth quarter, but the Wildcats’ defense once again was unable to get off the field.

Cedar Hill converted a third-and-17 with under three minutes left, setting up a field goal to give the Longhorns a two-possession lead.

Salter, a Tennessee signee, finished the game 19-of-25 for 190 yards and a touchdown, adding 120 yards and a score on the ground.

“We long-armed him a little more just trying to keep him in the pocket and crashed in on him,” Lanz said. “I just feel like it was a lot of quick passes they kept getting off before we could get pressure. They made good plays.”

And even though the Wildcats fell short of their goal of reaching the state final for the second straight season, Webb said he was unbelievably proud of his team’s effort.

“As I told them after the game, no one like to lose, and no one ought to feel good right now,” Webb said. “I don’t feel good, and I won’t feel good for a few days. But there’s going to come a time where we look back on the totality of this season and be proud of what we accomplished. Even with a loss today, I’m extremely proud of our kids for their perseverance, grit, toughness and class.”