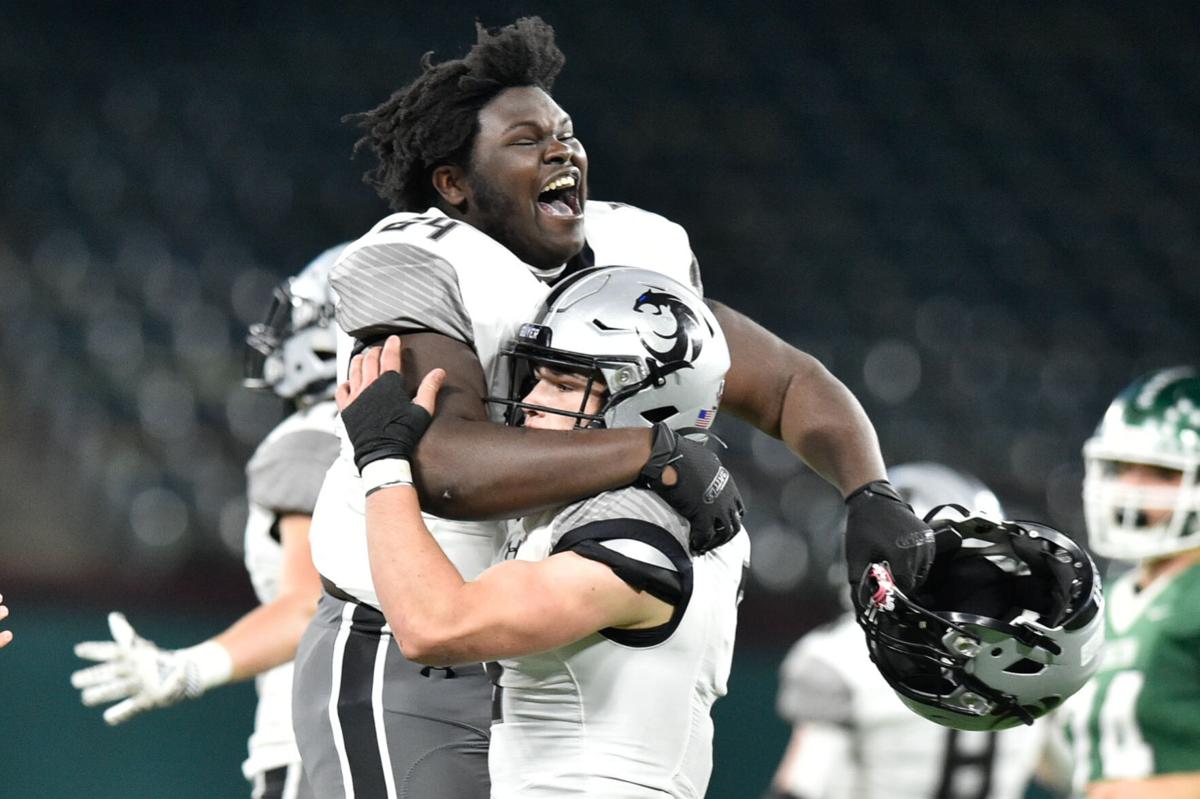 Guyer celebrates after defeating Arlington in double overtime Saturday at Globe Life Park in Arlington. With the win, the Wildcats claimed the Class 6A Division II Region I area title. 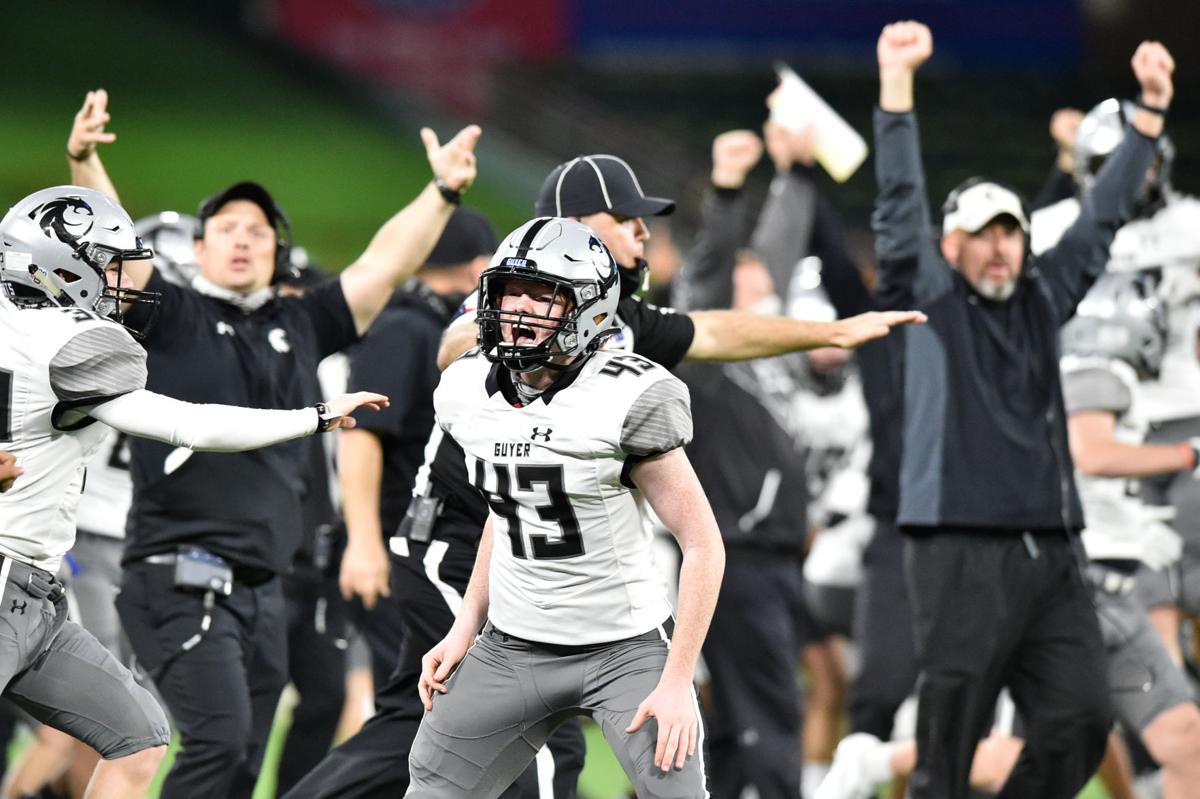 Guyer players and coaches celebrate after defeating Arlington on Saturday at Globe Life Park in Arlington. 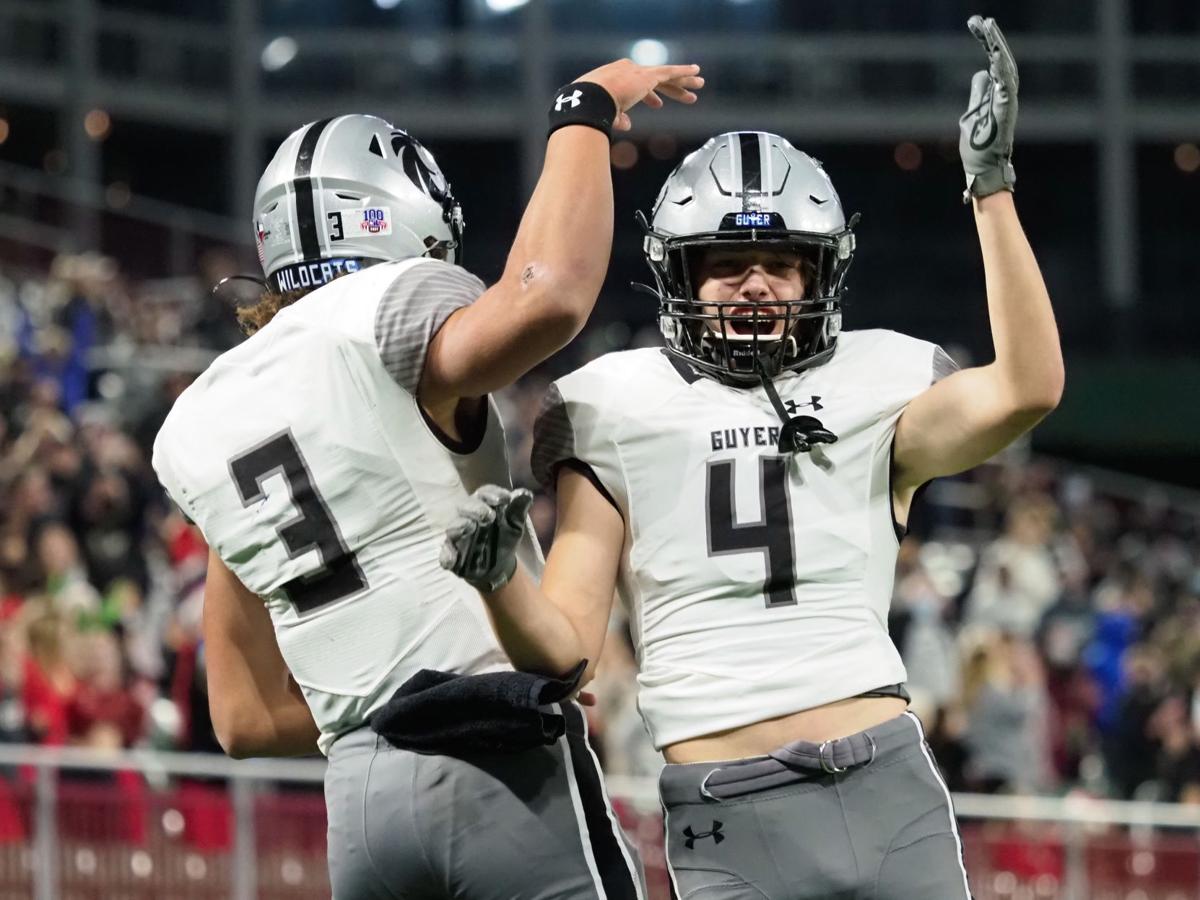 ARLINGTON — Rodney Webb waited until Guyer absolutely had to have it.

The Wildcats ran virtually the same play out of the same jumbo formation all night against Arlington. But on third down in double overtime looking to punch it in, Guyer’s coach decided it was time for a wrinkle.

With the Wildcats’ season hanging in the balance, Webb dialed up a play to put the ball in his quarterback’s hands.

On the ensuing snap, Stowers faked the handoff and rolled to his right. He got the edge and dove for the pylon, scoring the eventual game-winning touchdown from three yards out.

The Texas A&M signee keeps it himself. Guyer has the lead in double overtime.

After a roller-coaster night that featured plenty of momentum shifts, Stowers’ touchdown proved to be the difference, as Guyer (9-2) held on to beat Arlington 38-31 in a double-overtime thriller to win the Class 6A Division II Region I area title at Globe Life Park.

“The thing I love more about this team than anything else is being able to fight whenever the odds are stacked against us and we’re going through a little adversity,” Stowers said. “The ability to fight to the end of the game is what I love more than anything.”

The Wildcats’ resolve is what forced overtime, as the situation looked bleak for Guyer at the end of regulation.

Arlington tied the game at 28-28 late in the fourth quarter on a 60-yard run from Joel Murray. The Colts’ defense then rose to the occasion, stopping Guyer on fourth-and-2.

Arlington got the ball back with 1:37 left and no timeouts with a chance to win, but the Wildcats’ defense sacked Colts quarterback Kris Sims to force overtime.

“It’s a testament to our kids,” Webb said. “As coaches, we’re always preaching for kids to believe it and own that perseverance. That’s something that is born from inside of them. I just think you look at the entire season, and every game we’ve played like this with the exception of Ryan, we found a way to win it.”

Both sides traded field goals in the first overtime, with Guyer’s Michael Mayfield connecting on a 36-yarder to send the game into a second overtime.

After Stowers’ touchdown put the Wildcats up 38-31, Guyer’s defense did the rest. With Arlington facing a fourth-and-8 and the game on the line, Sims’ pass fell incomplete.

Guyer’s bench spilled onto the field in celebration. The Wildcats had lived to fight another day.

“At the end of the game when the defense came down, and it was fourth down, I walked up to them and said that we were playing for our lives right now,” Stowers said. “We had that in mind the whole game. Although we didn’t execute on all aspects of the game like we could’ve, we came out and fought our tails off.”

Guyer ended the game with 479 total yards, and 351 of them came on the ground. Stowers was 6-for-12 with 128 yards and a touchdown through the air, adding 103 yards and a score rushing. BJ Phillips and Ty Alridge also both eclipsed 100 yards rushing.

With the win, Guyer advances to the 6A Division II Region I quarterfinal. The Wildcats will play Abilene at 3:15 p.m. next Saturday, Dec. 26 at Globe Life Park.