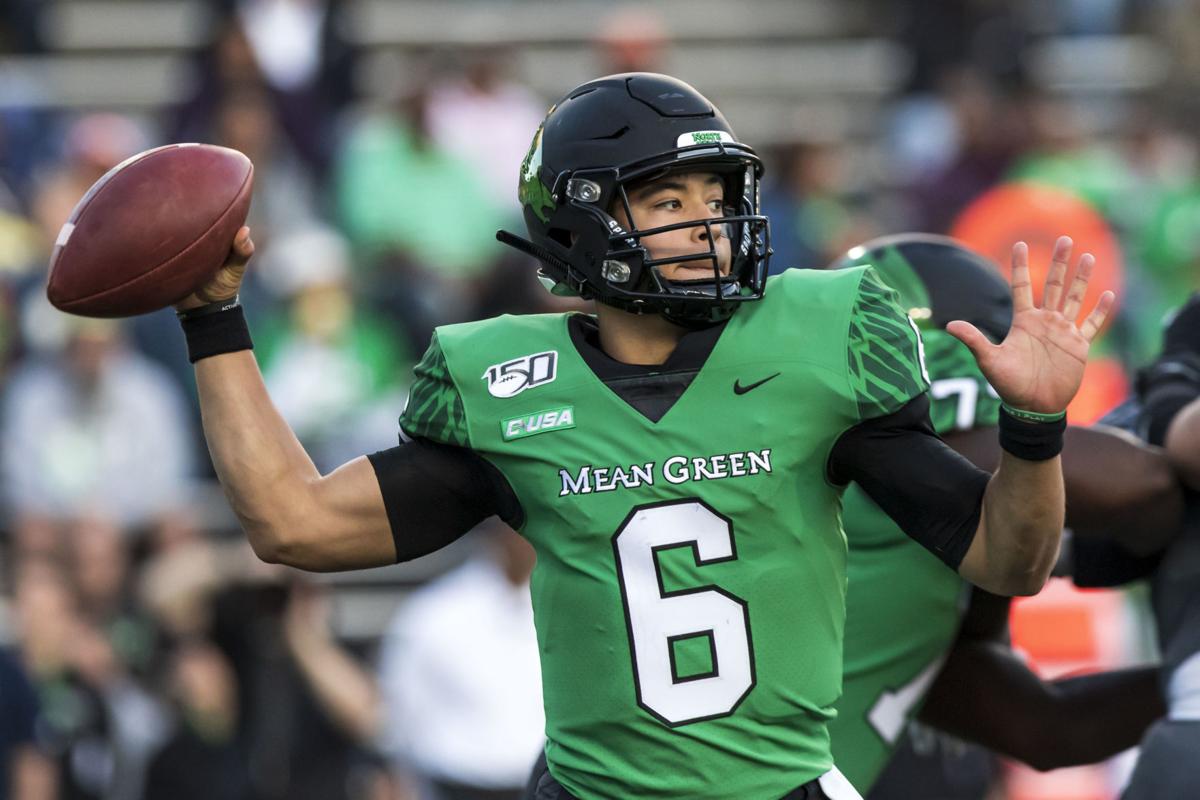 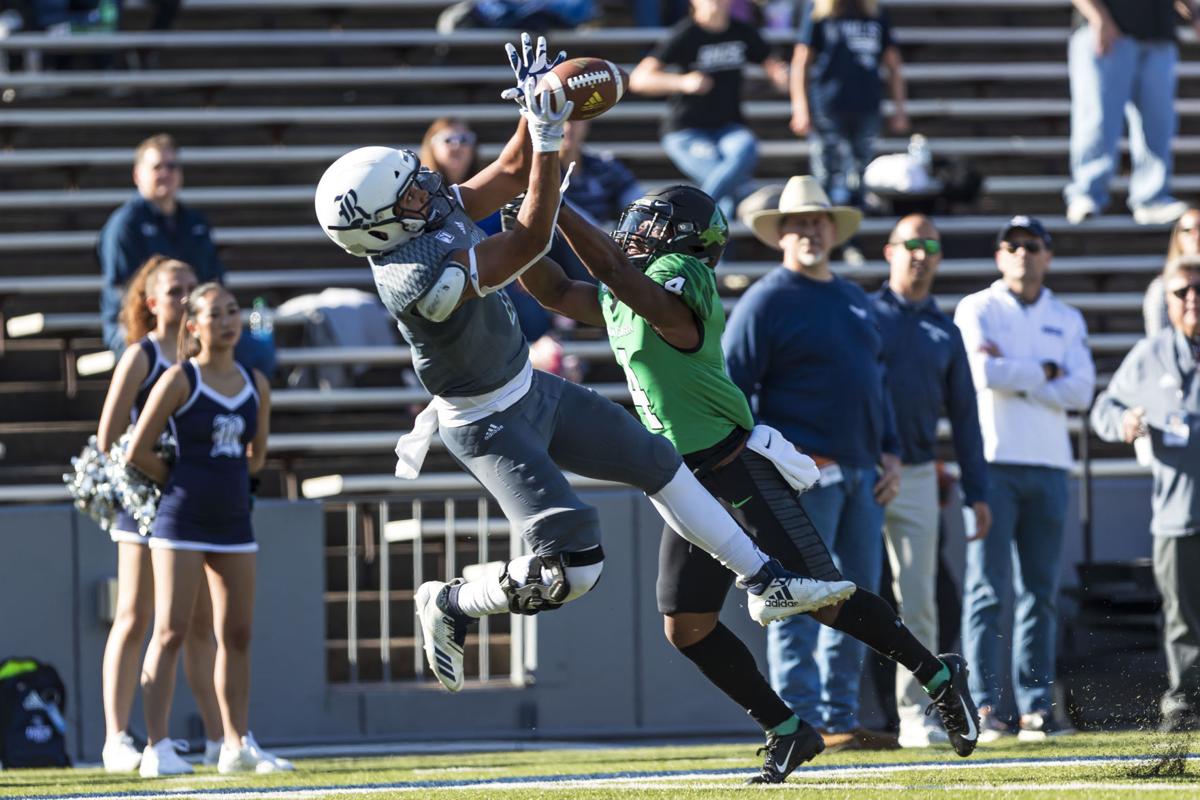 HOUSTON – Mason Fine sat on a concrete step outside the North Texas locker room on Saturday night, his head in his hands.

UNT’s quarterback had visions of how his senior season would unfold with a run at the Conference USA title and a fourth straight bowl appearance.

A season that began with the Mean Green being picked to win C-USA’s West Division title won’t end with that bowl trip, not after a stunning 20-14 loss to Rice on Saturday at Rice Stadium.

“It’s tough,” Fine said. “A bowl is our No. 1 goal and mission and we didn’t accomplish that. There is a lot of disappointment this season.”

Football: UNT can not overcome slow start on offense

The season will end next week in a home game against UAB.

That ending wasn’t what anyone at UNT envisioned with Fine leading a team loaded with seniors who arrived on campus with coach Seth Littrell in 2016. That group helped turn around a program coming off a one-win season. The Mean Green won nine games in each of the last two years.

UNT hoped to send those seniors out on a high note but never seemed to jell, despite featuring Fine, the nation’s leading active passer with 12,237 yards. The Mean Green lost all six of their road games this season, often in heartbreaking fashion.

“I’m disappointed for this senior group,” Littrell said. “They have accomplished a lot. Guys in the locker room are hurting. I hate it for them. There is no doubt in my mind that we felt like we would have a lot more success this season. That doesn’t diminish what they did for the program.”

The way UNT’s bowl hopes ended made it all the tougher to take for the Mean Green.

UNT battled back from a 20-0 deficit and had a chance to complete the comeback after scoring 14 unanswered points.

Tre Siggers scored on a 1-yard run on fourth-and-goal to pull UNT within 20-14 with 7:32 left. UNT linebacker Larry Nixon III leveled Rice wide receiver Austin Trammell on the ensuing kickoff, forcing a fumble that Evan Johnson pounced on at the at the Rice 23.

Those are the types of opportunities UNT has converted more often than not over the course of Fine’s four seasons.

This time the Mean Green came up short. UNT was called for holding twice on its final series and was forced to throw to the end zone on third and fourth down from the Rice 15 when it needed 12 yards for a first down.

Fine tried to get the ball to fellow senior Michael Lawrence both times. Rice linebacker Treshawn Chamberlain leveled Lawrence on a fourth-down pass over the middle.

“I knew Mike would take a shot, but that was my only hope. Rice made the play,” Fine said. “If I had to go to any guy, it’s Mike.”

UNT still had a chance after Rice took over with 4:15 left if it could come up with a stop. Those hopes ended when Tom Stewart completed a 35-yard heave to Brad Rozner on third-and-14. Rice picked up another first down on a Nashon Ellerbe run and ran out the clock to thwart UNT’s comeback bid behind its defense that shut Rice out on its last eight possessions.

The Mean Green couldn’t take advantage of the opportunity behind Fine, who was knocked out of UNT’s loss to Louisiana Tech on Nov. 9 with a concussion.

Fine came back and threw for 163 yards against the Owls, including 116 in the second half when UNT rallied after being shut out after a dismal first half.

UNT didn’t pick up its initial first down until Fine hit Lawrence for 20 yards on third-and-18 with less than three minutes left in the first half.

That strike accounted for a sizable percentage of UNT’s 51 yards of offense in the first half, when Rice stormed out to a 20-0 lead.

Rice was already up 3-0 when linebacker Treshawn Chamberlain intercepted Fine’s second pass of the game to set the Owls up at the UNT 39. The first half spiraled down from there for UNT.

Aston Walter scored on a 1-yard run following the turnover. Charlie Booker added an 8-yard touchdown run for Rice, which held the ball for more than 22 minutes in the first half.

That fact they needed that attitude adjustment was a stunner considering UNT’s season was on the line.

North Texas saw its bowl hopes come to a stunning end on Saturday with a 20-14 loss to Rice.

“Yeah, I am surprised,” Littrell said. “Things don’t go your way, you have to overcome adversity and get into the groove of the game.”

Littrell talked to his players about how to handle that adversity in the locker room after seeing its bowl hopes end.

“Coach Littrell talked about taking ownership and said it was on him,” Fine said. “Maybe it was the preparation in the offseason. I was there with him. Is there any way I could have been better? It’s a lesson learned that we can take into life.”