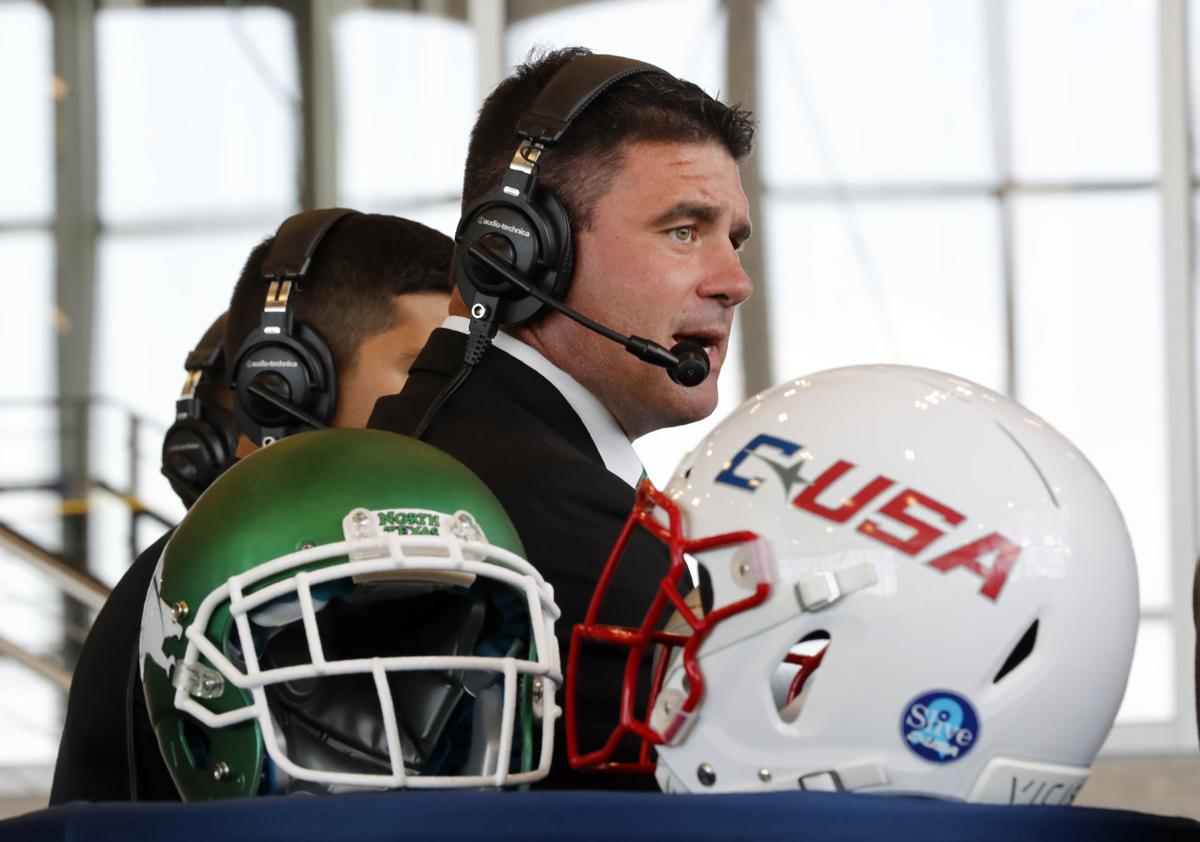 North Texas coach Seth Littrell spent some time over the last few days with one of his longtime mentors.

Former Kansas coach Mark Mangino was the offensive coordinator at Oklahoma during Littrell’s playing career and gave him his first job in coaching as a graduate assistant with the Jayhawks back in 2002. Mangino has dropped by practice a few times this fall and was also at the Mean Green’s loss to Rice on Saturday that ended UNT’s bowl hopes.

Littrell acknowledged during his weekly press conference on Tuesday that he plans to thoroughly evaluate his program and a disappointing season that will end on Saturday with a home game against UAB.

UNT fell to 4-7 following its 20-14 loss to the Owls, a tough turn of events for a team that won nine games in each of the last two seasons.

Littrell’s discussions with Mangino are an early part of his evaluation process.

“I spent a lot of time this past week talking through some different things,” Littrell said. “Sometimes you have to go through these situations on your own and reflect.

“We all have to grow through this and figure out how to move forward in a positive direction. Ultimately, we are here to develop and mentor these men and compete for championships.”

UNT thought it had a team capable of winning the program’s first conference title since Hall of Fame coach Darrell Dickey guided the Mean Green to four straight Sun Belt titles, a run that ended in 2004.

The Mean Green were picked to win Conference USA’s West Division in the league’s preseason poll but came up short.

Littrell said he will begin his evaluation process with himself.

“There is a lot of self-reflection,” Littrell said. “I know there will be more in the offseason to try to figure out different things I need to do better as a coach, mentor and leader.

“We all go through adversity and it’s my job as the leader that, first and foremost, I hold myself accountable and find ways to overcome it and fight through it. That is what life is about. There is no doubt that is what I will be doing.”

That process will pick up in the offseason. Littrell and his staff are focused on UNT’s game against UAB.

Once that game is over, Littrell will consider where to turn next. He declined to address if he will consider any changes to his staff.

Littrell left little doubt that he considers the struggles UNT has suffered through this season unacceptable.

Falling at Rice was a particularly tough blow. UNT fell behind 20-0 to Rice before its late rally came up short.

“I didn’t think we came out with the right mentality, especially in the first half to have the success we wanted,” Littrell said. “Ultimately, we didn’t do a good enough job as coaches and players to have success. That falls on me. I take full responsibility.”

Littrell entered the season believing his team would play in a bowl for the fourth straight season.

“We didn’t have the success in terms of wins and losses that I believe we should have this season,” Littrell said. “I don’t think it’s due to a lack of effort or talent. Ultimately, you have to do the little things right in preparation to have success. We have to find a way fix that in the future.”

Senior quarterback Mason Fine won’t be a part of that rebuilding process but expressed confidence in the Mean Green’s ability to get back on track.

“I asked the coaches after the Rice game if I was a bad leader or could have done more in the offseason,” Fine said. “It’s tough. I don’t have an answer. Sometimes that’s how life is. It’s how you respond. The coaches and administration will get it back on track.”

Littrell: Status of Bussey up in air heading into 2020

The status of UNT wide receiver Rico Bussey Jr. is up in the air heading into the 2020 season, Littrell said.

Bussey was a Preseason All-Conference USA selection heading into his senior season. He suffered a torn ACL in UNT’s loss to Cal in the third week of the year.

The Oklahoma native has a redshirt available and plenty of options. He could return for a second chance at his senior season at UNT, which will be breaking in a new starting quarterback following the departure of Fine. Bussey could also pursue options as a graduate transfer or professionally in the NFL or new XFL.

“We are not sure what he is going to do,” Littrell said.

Bussey is UNT’s active leader in receiving yards with 1,941 and receiving touchdowns with 21, despite playing in just three games this season.

The funds will be used to renovate and upgrade facilities. Part of the money has also been set aside for recruiting enhancements and coaching retention initiatives.

“We are appreciative to have donors like Jim and Linda McNatt who understand the importance of supporting the whole student-athlete experience for all of our programs,” UNT athletic director Wren Baker said in a statement. “This generous gift is another significant investment in the foundation we are constructing to build champions and prepare leaders.”

UNT has received five gifts of at least $1 million since Baker took over the program in the fall of 2016.

The school has used those gifts to dramatically upgrade its facilities in the last several months. UNT opened the Lovelace and McNatt Families Practice Facility, a $16 million indoor venue, this fall.

UNT also recently received a $1.5 million commitment from Bruzzy Westheimer that will allow for the completion of an on-campus golf practice facility.