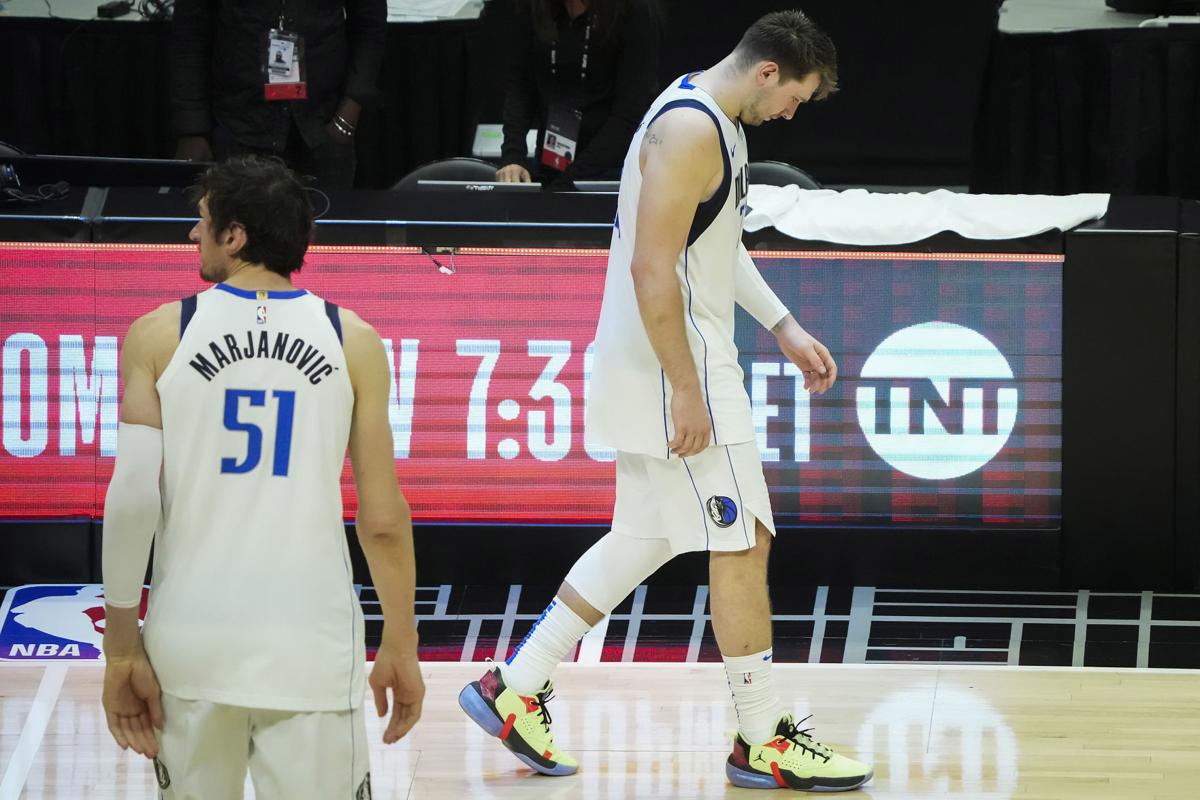 Dallas Mavericks guard Luka Doncic and center Boban Marjanovic walk off the court after a loss to the LA Clippers in Game 7 of their NBA playoff series Sunday at the Staples Center in Los Angeles. 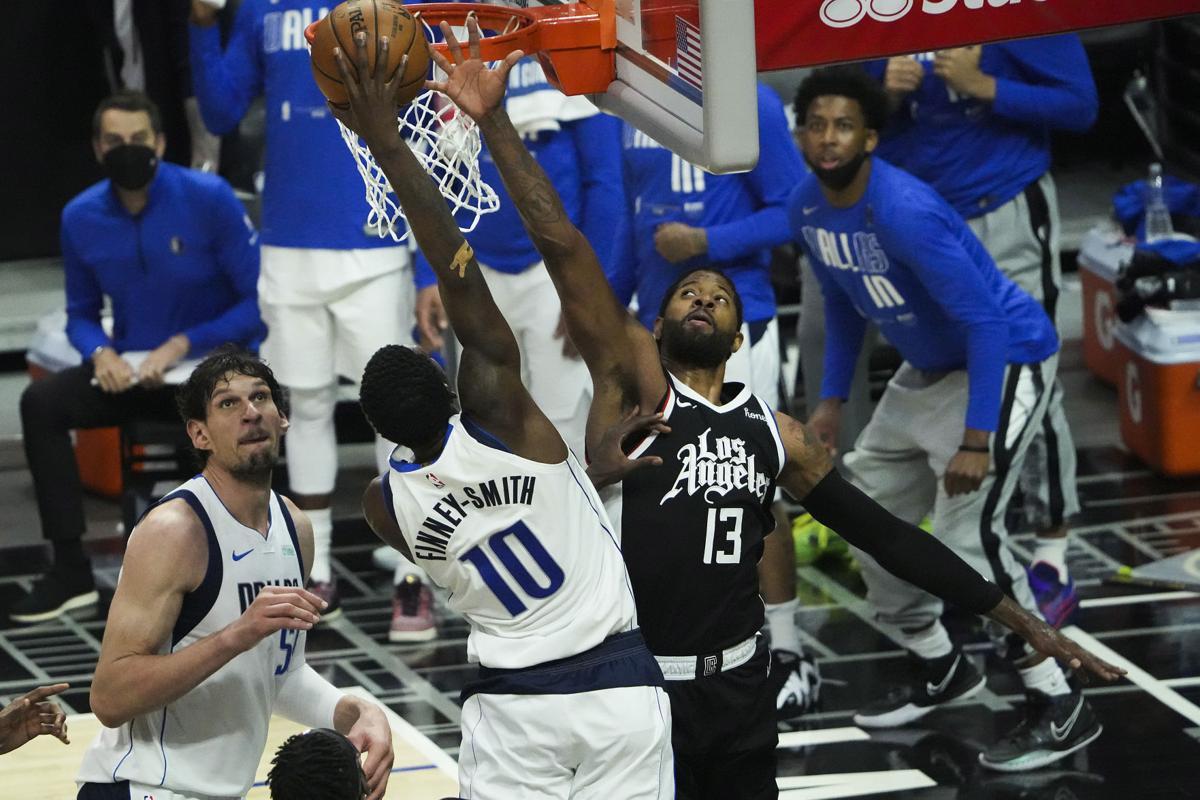 Dallas Mavericks guard Luka Doncic and center Boban Marjanovic walk off the court after a loss to the LA Clippers in Game 7 of their NBA playoff series Sunday at the Staples Center in Los Angeles.

LOS ANGELES — Regrets? The Mavericks will bear many this offseason and perhaps beyond. Some of them occurred here Sunday in Staples Center.

More irksome than this season-ending 126-111 defeat to the Los Angeles Clippers, however, will be the lost opportunities that enabled Sunday’s winner-take-all Game 7 to occur in the first place.

Dallas did in fact lead by five points in Sunday’s third quarter before the bottom dropped out. It got a career-high-tying 46 points from Luka Doncic. The Mavericks had chances, but those aren’t the ones they’ll most rue after failing to end the franchise’s 10-year drought without a playoff series win.

“We were up 2-0,” forward Dorian Finney-Smith said. “We all feel like we should have won the series. Anybody come in, sit down, think we shouldn’t have won, they’re crazy.”

Moreover, Dallas led 30-11 early in Game 3 in American Airlines Center yet joined NBA infamy by becoming the fifth team to win Games 1 and 2 on the road and still lose the series. Moreover, teams that started series 2-0 on any court had been 297-21. Make that 22 now.

The Mavericks went 0-3 in Dallas during this series, including Friday’s Game 6 loss in a game that could have clinched the series. Until Sunday, no home team had won in this series, an NBA playoffs first.

Thus this Mavericks season ended like last year’s. In the first round of the playoffs. With a loss to this same Clippers franchise. The difference is last year’s series ended in six games.

Doncic at age 22 became the youngest player to score 40 or more points in a Game 7. He averaged 35.7 points in this series. But when asked what he’s proved in 13 career playoff games while averaging 33.5 points, 9.5 rebounds and 8.7 assists, he shrugged.

“Nothing yet,” he said. “We made the playoffs twice since I’ve been here. We lost both times, so at the end you get paid to win. We didn’t do it.”

Doncic scored 29 points in Sunday’s first half, the most in any half of a Game 7 in at least 25 years, according to ESPN stats and information.

Dallas trailed 70-62 after allowing 63% first-half shooting. But when the Mavericks rallied and took their biggest lead, 81-76, with 6:53 left in the third quarter, they seemed on the cusp of exerting control.

Wrong. The Clippers scored the next 12 points and kept their foot on the accelerator, pushing their run to 21-2 and finally 24-4 to end the quarter.

A Mavericks exception in Game 7 was Finney-Smith, with 18 points and 10 rebounds. Though Kristaps Porzingis had his best game of the series, 16 points and 11 rebounds, his overall numbers paled to what fans expect of Doncic’s 7-3 co-star and the franchise’s highest-paid player ($29 million).

Porzingis averaged 20.1 points and 8.9 rebounds while missing 29 of the Mavericks’ 72 games, but in this series he was placed in more of a complementary scoring role because of the Clippers’ defensive schemes.

“Of course there’s a little bit of mental battle because that’s not what I’m used to doing and where I’m most comfortable at,” Porzingis said, adding that it reminded him of his rookie season with the New York Knicks.

“I just try to be as professional as I can.”

Porzingis has two seasons and a player-option year remaining on his contract, but his evolved role is among the issues the Mavericks will confront this offseason. Another is the free agency status of Tim Hardaway Jr.

Doncic again was a bargain this season, earning $8 million in this, the third year of his four-year rookie contract.

This offseason, however — provided he is named first-, second- or third-team All-NBA as expected — Doncic will be eligible to sign a roughly $200 million rookie-max extension that would take effect after the 2021-22 season.

After his points and 14 assists Sunday created the most points by one player in Game 7 history — 77, matching his jersey number — Doncic declined to discuss what roster enhancement Dallas needs this offseason.

“I think that’s a question you should ask the guys that make decisions, right? I’m just a player here. But we will give everything to play great. We give everything, I’m very proud of this team. Obviously I hate losing. We hate losing, but I’m proud of my team.”

Doncic was the preseason NBA MVP favorite. Dallas began the season with high expectations but lost four players to COVID-19 for extended stretches and stumbled to a 9-14 start.

The Mavericks won 22 of their last 34 games and their first division title since 2010 and entered the playoffs as the West’s No. 5 seed. The playoff result, though, is the same as last year’s finish in the Disney World bubble.

As of Sunday it had been 3,647 days since Dallas last won a playoff series, defeating Miami in the NBA Finals on June 12, 2011.

“We’re very disappointed with the result of the series, obviously,” 13th-year Mavericks coach Rick Carlisle said. “I thought through the course of it there was a lot of growth, a lot of very valuable experience. But losing in the first round is something that we don’t like doing.”

Carlisle is 61. His contract runs through the 2022-23 season. He was asked after Sunday’s game if he believes he is the right coach to lead the franchise into the future.

“Obviously I do,” Carlisle said, adding that Mavericks owner Mark Cuban would be the best person to ask. “I’d text him and see what he has to say about it.”

Cuban’s succinct response to The News about Carlisle’s status: “He isn’t going anywhere.”

Neither, again, are the Mavericks, for the remainder of another postseason.