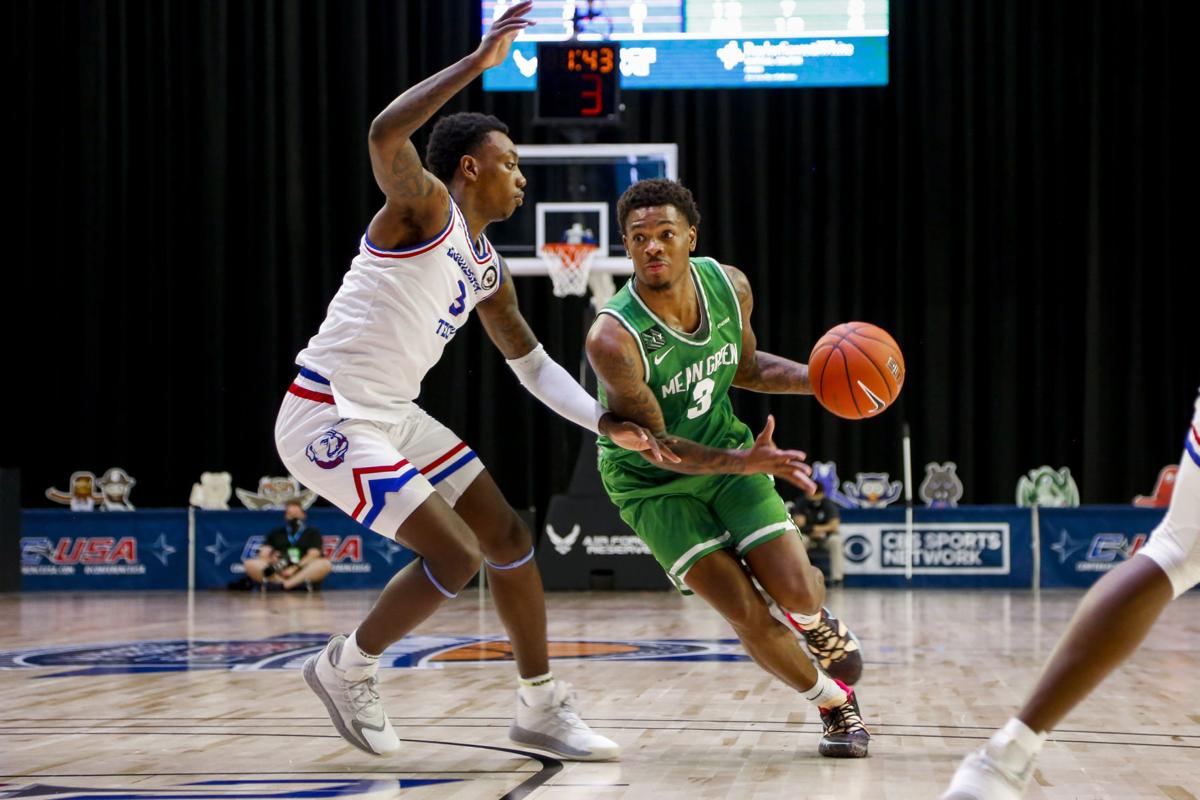 North Texas point guard Javion Hamlet drives to the basket as Amorie Archibald defends during the Mean Green’s win over the Bulldogs in the semifinals of the Conference USA tournament on Friday. 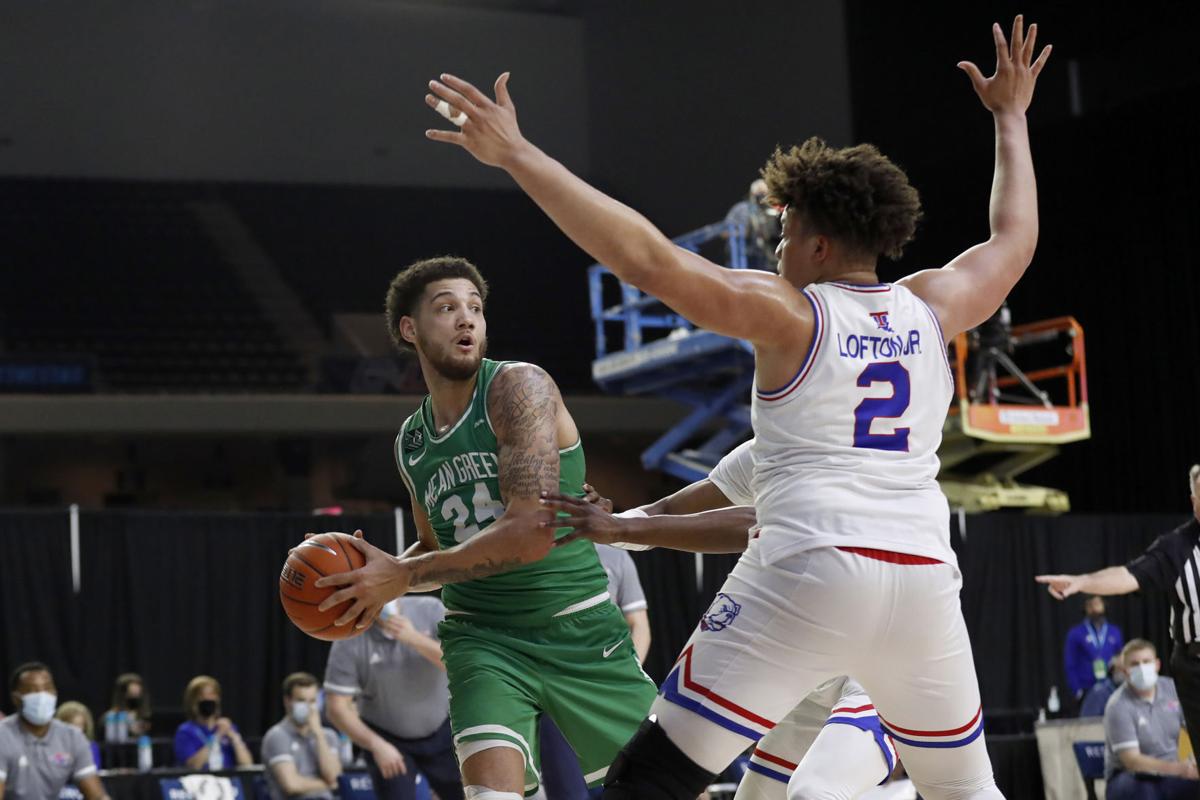 UNT’s Zachary Simmons (24) scored 10 points during the Mean Green’s win over Louisiana Tech in the Conference USA tournament semifinals on Friday in Frisco. 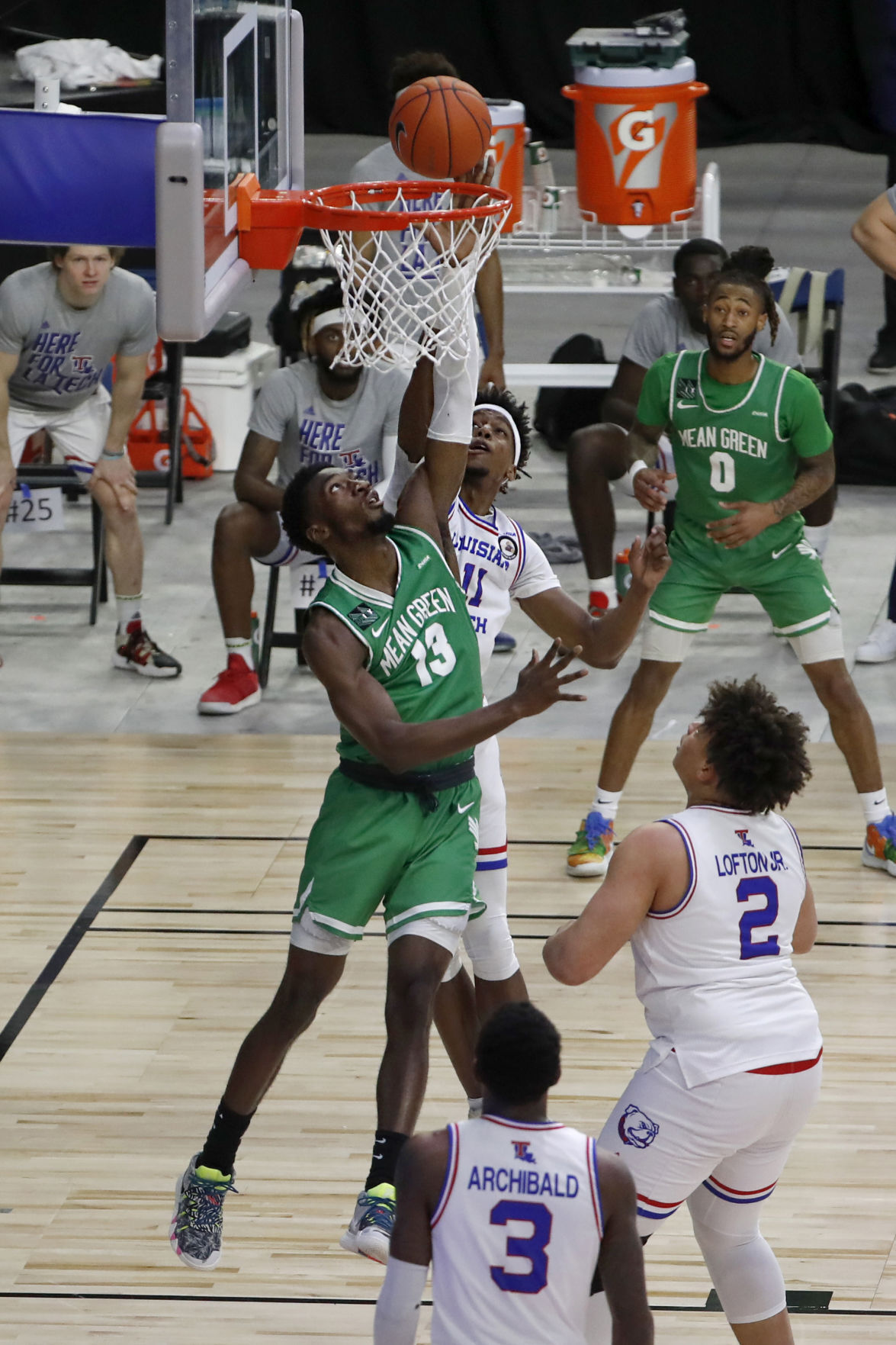 Thomas Bell (13), with 10 points, was one of four Mean Green players to score in the double figures in their win over Louisiana Tech in the Conference USA tournament semifinals on Friday at the Ford Center in Frisco.

FRISCO — Grant McCasland sold a vision of what North Texas could be when he took over a program that had hit rock bottom back in the spring of 2017.

The idea of UNT winning championships and heading back to the NCAA tournament for the first time since 2010 seemed a like a distant goal back then.

A return is tantalizingly close for the Mean Green now following a 54-48 win over Louisiana Tech in the semifinals of the Conference USA tournament on Friday at the Ford Center. UNT’s coach led the Mean Green to their third win in as many days and will look to make it four on Saturday night they face Western Kentucky.

“There is no question this is what everybody wanted. Dr. Smatresk and Wren wanted it,” McCasland said of UNT President Neal Smatresk and athletic director Wren Baker. “It takes everyone, and I don’t say that lightly.”

The latest example has come this week when UNT pulled off consecutive upsets. The Mean Green, the No. 3 seed from the West, knocked off Old Dominion, the No. 2 seed from the East, late Thursday night, and came back just a few hours later to take down Louisiana Tech. The Bulldogs were the No. 1 seed from the West.

UNT won the Sun Belt in 2010, the last time it went to the NCAA tournament.

The Mean Green will be looking for their first NCAA appearance since then on Saturday and believe they will have plenty left in the tank after three tough games.

“Heck yeah, we have gas left,” McCasland said. “We didn’t come here to win three. You put your heart into every possession and compete.”

UNT did just that against Louisiana Tech and had four players finish in double figures, including Javion Hamlet. The Mean Green’s senior point guard scored 18 points while playing 37 minutes in what has been an iron-man performance this week.

UNT has played with a short bench all season and lost key reserve Rubin Jones an injury in its series against UAB to cap the regular season.

The Mean Green have been forced to lean heavily on their five starters throughout the tournament. Hamlet has played all but six minutes over the course of UNT’s three tournament games and played 37 minutes against Louisiana Tech.

All five of UNT’s starters played at least 30 minutes against the Bulldogs. Four scored in double figures. Mardrez McBride scored 11 points, while Thomas Bell and Zachary Simmons both added 10.

“We had to stay together, be really gritty and rebound,” UNT guard James Reese said. “We have had guys step up throughout the tournament.”

UNT needed contributions from each of its key players in its third game against Louisiana Tech this season. The teams split a pair of regular season games at UNT that went down to the wire.

UNT was locked in another close game with the Bulldogs for most of the day before breaking the game open with a 10-0 run in the second half. Bell hit a layup at the 18:17 mark of the second half tie the game at 26-26.

Hamlet capped the run with a layup that put UNT up 34-26. The Mean Green clamped down on Louisiana Tech the rest of the way.

UNT will now turn its attention to another game with WKU with a championship on the line. The Mean Green beat the Hilltoppers late last season to clinch the C-USA regular season title.

UNT lost its chance to follow up with a win in the conference tournament when the coronavirus pandemic caused the event to be canceled.

UNT will get a second chance on Saturday when McCasland will continue to guide a program he has rebuilt. The Mean Green finished 8-22 the season before his arrival.

UNT’s veteran players joined the Mean Green because they believed in McCasland’s vision of winning championship games and playing in the NCAA tournament. Saturday’s C-USA championship game against the Hilltoppers is all that’s left standing in UNT’s way.

“When we came here, we established this is what we want to do,” McBride said. “We want to win championships.”