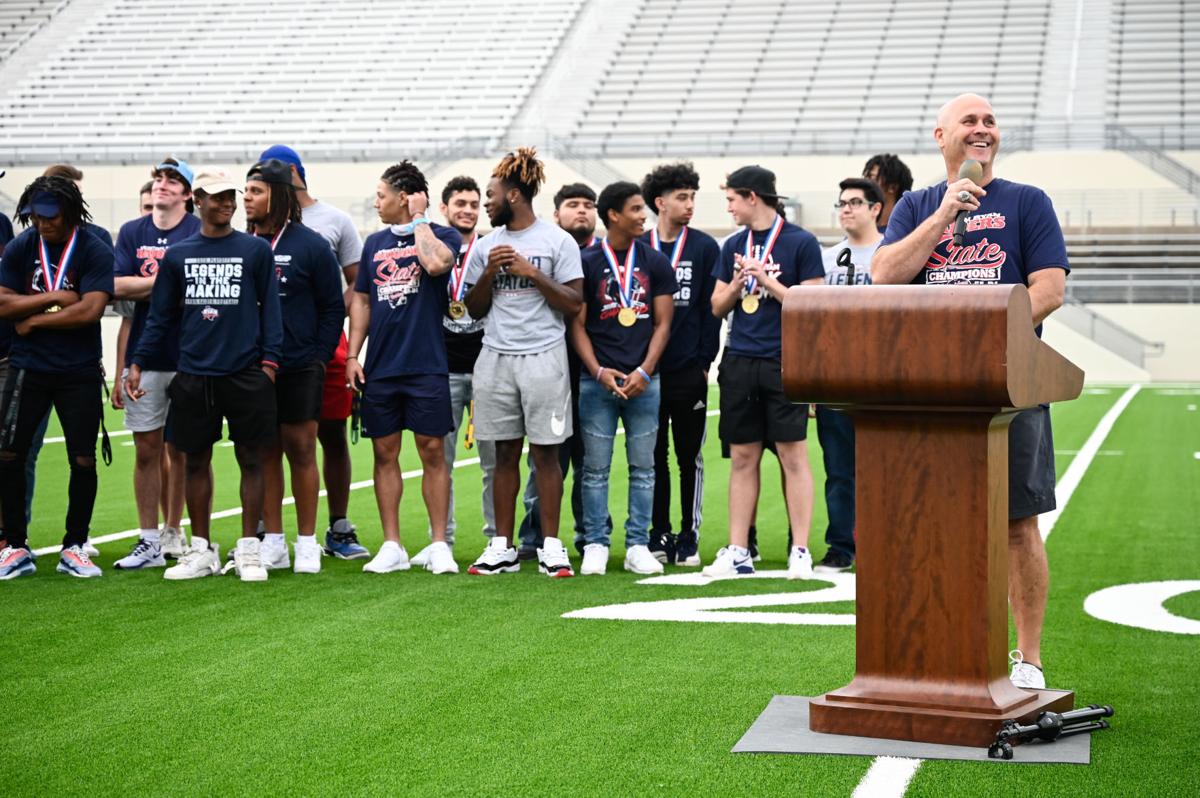 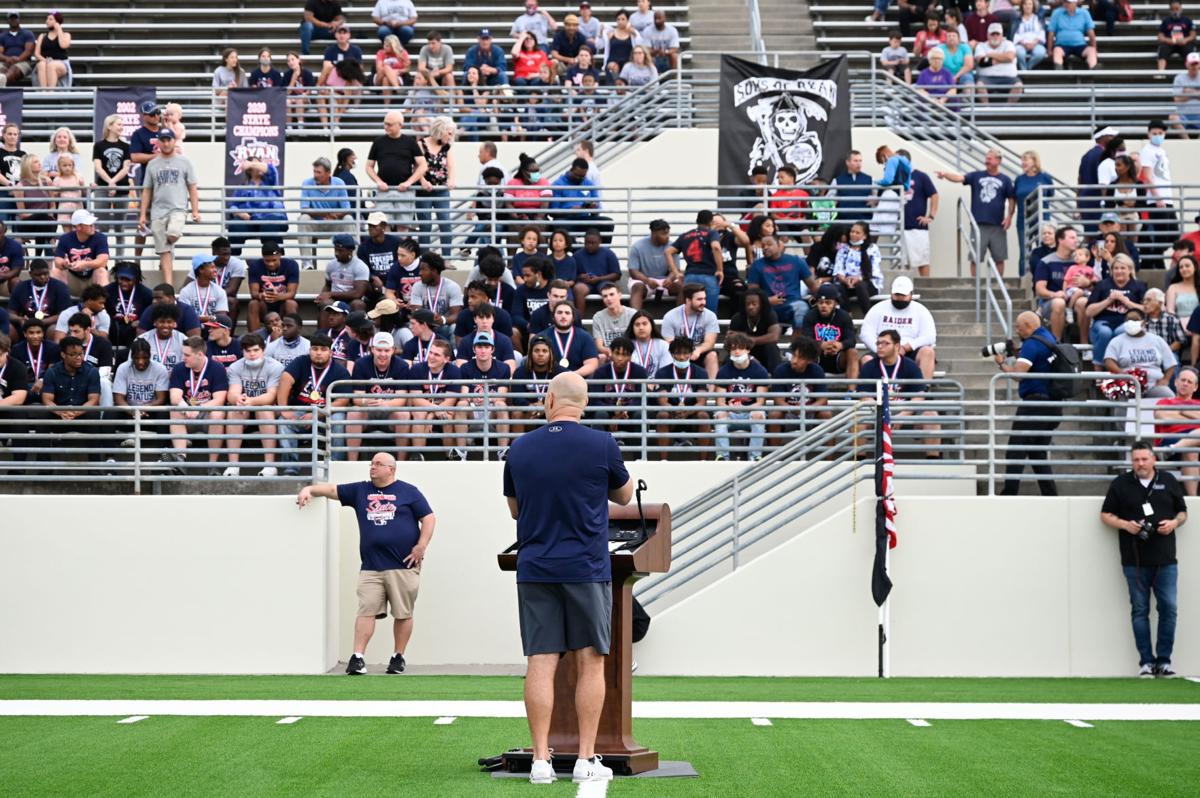 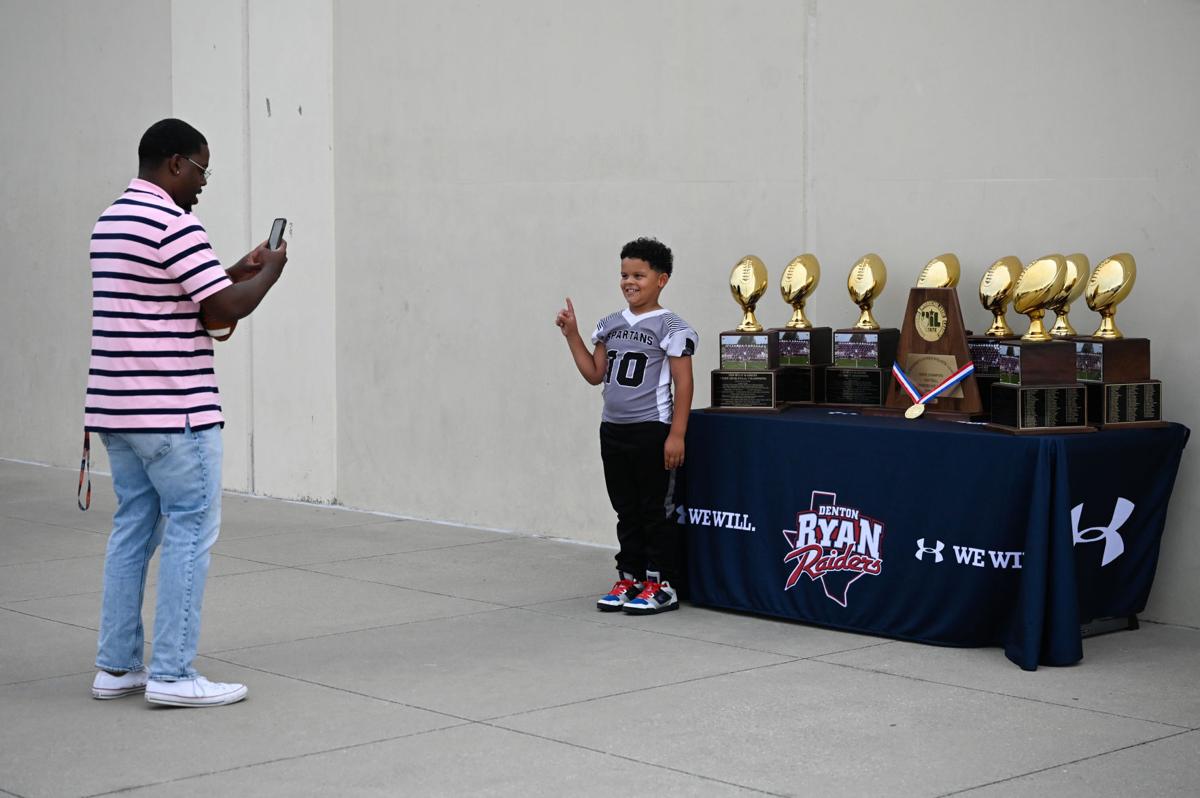 Ryan fans take pictures with the trophies during the state championship celebration on Saturday at C.H. Collins Athletic Complex. 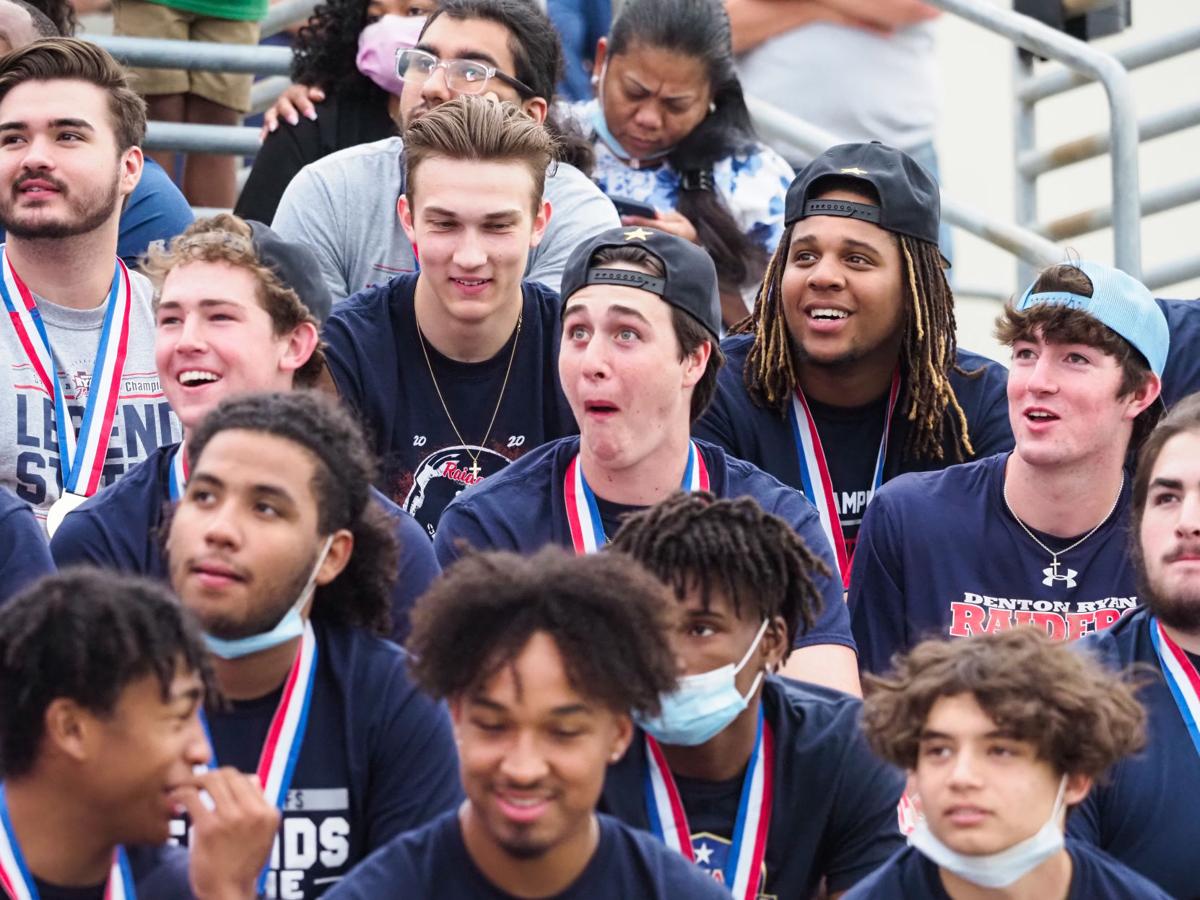 Ryan fans take pictures with the trophies during the state championship celebration on Saturday at C.H. Collins Athletic Complex.

Yes, the Ryan Raiders won the Class 5A Division I state title way back in January. The players were even awarded their championship rings last month. But for one reason or another, they hadn’t had an opportunity to celebrate properly.

That all changed on Saturday.

Exactly four months to the day after winning the program’s third state title and first since 2002, players and coaches from that team joined parents, fans and Denton school district administrators at a special championship celebration on the brand-new turf at C.H. Collins Athletic Complex. The event featured the Raiders kicking things off by doing their typical pregame march onto the field followed by a short presentation by head coach Dave Henigan, who spent time honoring the team and reflecting on their wire-to-wire run as the No. 1 team in the state.

The celebration closed with a performance by the cheerleaders and strutters and a 37-minute full-season highlight video. Below is a longer version of the video.

“This was great,” Henigan said. “We handed out the rings [in April], but that was really just for the kids. To include the community, parents and all the fans who wanted to show up was pretty cool. We couldn’t have a banquet, so this was different and awesome because fans who don’t normally go to the banquet showed up. It’s a great opportunity to close this chapter, relive a lot of the memories these kids created, and watch a bunch of special plays and great wins. It was fun.”

Henigan said the celebration was delayed in part because the turf hadn’t been completed at Collins until recently. But it worked out from the standpoint that several players who had graduated early — namely quarterback Seth Henigan (Memphis) and defensive back and wide receiver Billy Bowman Jr. (Oklahoma) — were off from school and able to attend.

“It feels great being back around the guys to celebrate,” Bowman said. “We haven’t talked so much about it, but now it feels good to re-see things and what we actually did. It makes me realize everything we went through.

“When we started the season, we were here practicing. So, to start the season that way and end it the same way is special.”

Seth Henigan agreed. He left for Memphis the day after the title win and enjoyed finally basking in the glory. Henigan was named Offensive MVP of the title game after throwing for 270 yards and four touchdowns in a 59-14 win over Cedar Park.

“I came back one other time before this, but it’s great to see all of them and watch this highlight video,” he said. “I liked the first two games at the beginning and the championship at the end. He did it chronologically; it was just great all around.”

Checking in from C.H. Collins for tonight's state championship celebration for @RyanRaiderFB. 4 months to the day since winning the 5A D1 title on Jan. 15. Stadium is filling up. #txhsfb pic.twitter.com/kzQARaYFS7

Ryan’s win in January capped a perfect 15-0 season, matching the program’s only other undefeated run from 2001. The 2002 team also won a state title but finished 15-1. The Raiders only trailed twice this past season — once in a Week 2 win over crosstown rival Guyer and the other in a second-round playoff win over College Station.

Since 2015, the Ryan football program is a staggering 85-5. They also boast a 59-game regular-season winning streak.

“This is a family. We made a lot of bonds this season. It’s special. We didn’t even know if we’d have a season, [and when we did], we went out there and did what we needed to do,” junior defensive back Austin Jordan said. Jordan is one of 13 starters coming back next season. “We have to handle business [next year], too. We have to have that same mentality.”