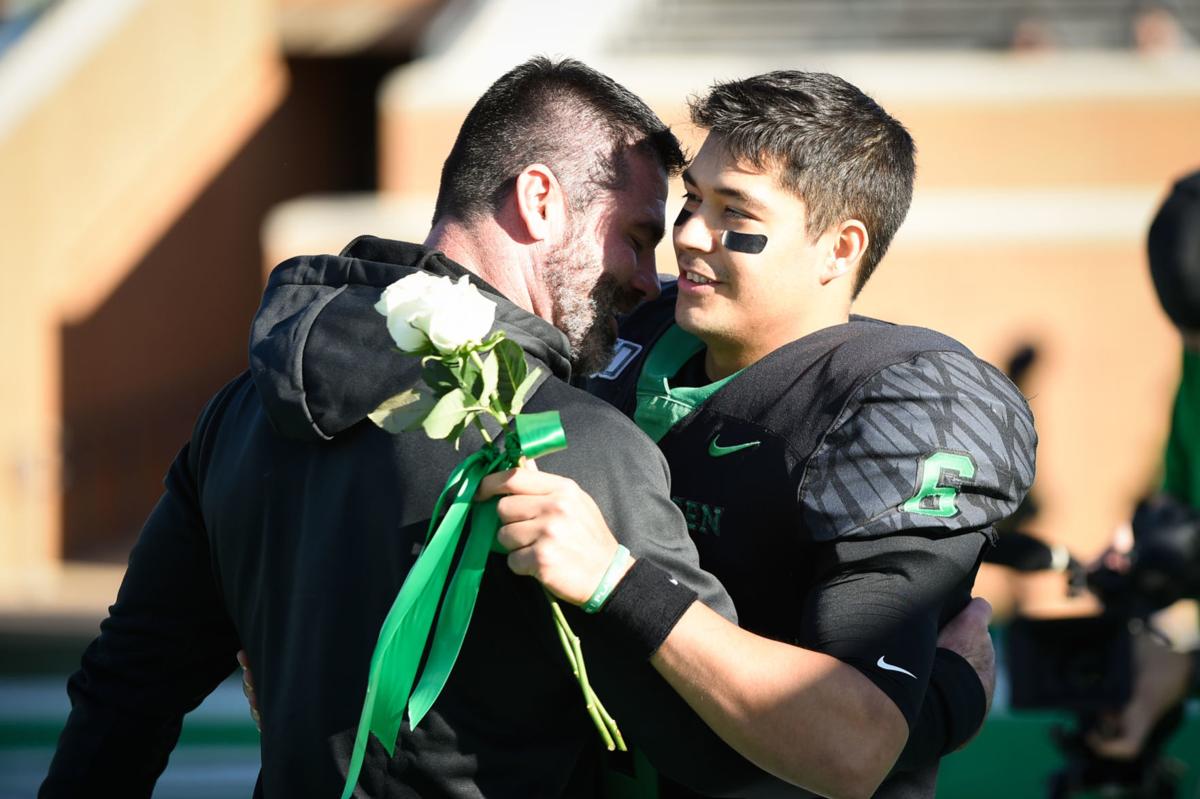 North Texas quarterback Mason Fine (6) and coach Seth Littrell embrace each other before the Mean Green’s loss to UAB on Saturday at Apogee Stadium.

A whole lot can change in a year when it comes to college football.

The situation North Texas and coach Seth Littrell find themselves in now perfectly illustrates the point.

At this time a year ago, UNT fans were collectively holding their breath as Kansas State spent a few days searching for a new coach to replace legend Bill Snyder.

Littrell was in the mix for the job before pulling out of the running. The former Oklahoma fullback was one of the hot names that was bound to come up in connection with top jobs across the country just a few months ago.

A down season that ended with a 26-21 loss to UAB on Saturday at Apogee Stadium altered the narrative.

One poor season doesn’t change the fact that Littrell is among the best coaches UNT has employed in recent years. It doesn’t erase the fact he guided the Mean Green to three straight bowls or that he recruited and developed the one of the greatest quarterbacks in program history in Mason Fine.

What it does change is the challenge Littrell faces moving forward. Littrell isn’t the hot name in college football he was just a year ago.

If he’s going to make the extremely rare jump from UNT to national name brand program, he’s going to have to do more than get UNT back to where it was as a nine-win team, a mark the Mean Green reached in back-to-back seasons the last two years.

Littrell’s likely going to have to win big, as in conference titles, bowl games and nonconference stunners, or be content to coach the Mean Green for foreseeable future.

Falling to 4-8 in his fourth season with the nation’s leading passer in Mason Fine leading the way isn’t going to help his national reputation, despite all the other factors that led to a tough year.

Littrell said he’s never seen a run of injuries like the one that helped torpedo UNT this fall. Key wide receiver Rico Bussey Jr. was lost for the season in the third game of the year. Tackle D’Andre Plantin missed four games.

Losing offensive coordinator Graham Harrell to Southern Cal was a bigger blow than many expected. UNT averaged 30.6 points per game, down exactly four points per game from last season when Harrell was running the show.

Littrell hinted at the fact complacency might have played a role in UNT’s demise as well.

“You never take it for granted,” Littrell said of success. “Winning nine games and going to bowl games is challenging. Every year has its own set of challenges. You can’t just show up as a freshman and expect it.

“That is not the way it works. You have to prepare and do the right things.”

The question now is how UNT and Littrell respond to a challenging situation. The Mean Green’s entire run of success in the Littrell era has largely come on the right arm of Mason Fine.

There is no way UNT easily replaces its quarterback. Fine finished with 12,505 passing yards in his career and was a terrific leader throughout his time with the Mean Green.

UNT has one less option for a replacement now after highly regarded Stephenville senior Kade Renfro backed out of a commitment he made to the Mean Green over the summer.

Finding a way to replace Fine is just one of the challenges Littrell faces. He also vowed to examine UNT’s program from the top on down. He’ll examine the job he did before looking at his coaching staff.

UNT played better defensively late in the season but struggled overall while allowing 32.5 points per game. The Mean Green also had issues on their offensive line and allowed seven sacks in their loss to UAB.

Are UNT’s issues a scheme problem, a talent issue or does the team need to shuffle the deck in terms of assistant coaches?

Those are questions Littrell will have to answer in the next few weeks. To his credit, Littrell has never backed off his stated goal of helping UNT compete for championships and win bowl games.

There is no doubt Littrell will do whatever he has to in order for UNT to get back on track. One can bet there is an added sense of urgency with the way the last year unfolded.

It seems like just yesterday the question was if UNT could hang on to Littrell for another season.

After a four-win campaign, the question is if UNT and Littrell can reclaim their status as up-and-comers in college football.

“This whole season has been an example of what life is like.” Fine said. “It’s taught me a lot as a man.”

Part of life, sports and coaching is dealing with setbacks. Littrell has mentioned that simple fact multiple times over the last few weeks.

How Littrell deals with a season filled with them, including Saturday’s loss to UAB, will play a big role in where his career goes from here.