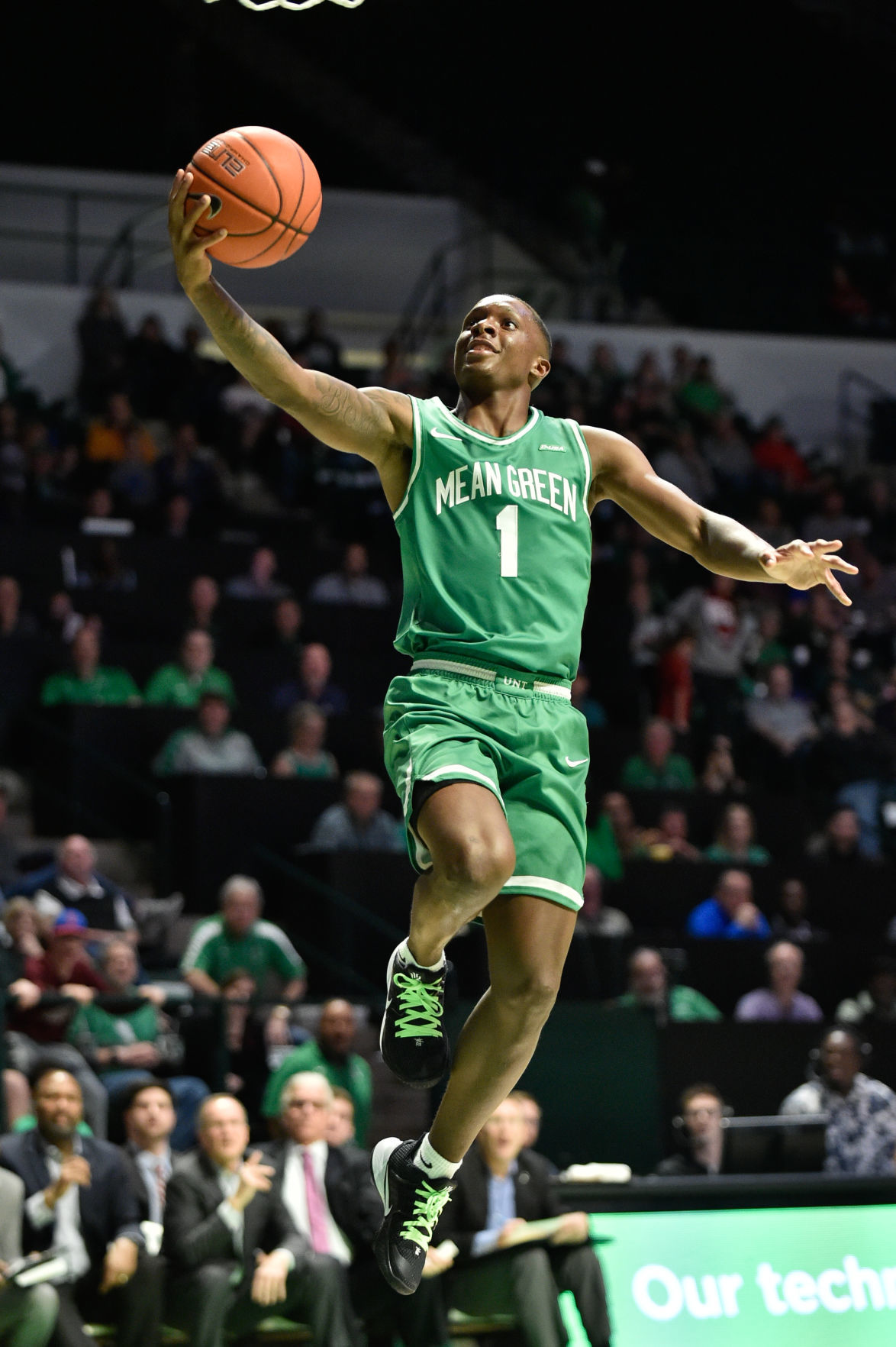 North Texas guard Umoja Gibson (1) scores on a layup during the Mean Green’s loss to Oklahoma on Thursday at the Super Pit. The Mean Green will host Arkansas-Little Rock on Saturday.

North Texas won’t have long to recover from a disheartening loss to Oklahoma, not with a game against Arkansas-Little Rock looming on Saturday.

The Mean Green will face the Trojans in the second half of a rare doubleheader that will begin at 3 p.m. when the UNT women host Louisiana-Lafayette.

UNT nearly pulled off what would have been a milestone win against the Sooners on Thursday before falling 82-80.

The Mean Green led by 10 in the second half before Oklahoma rallied behind Kristian Doolittle. The senior forward hit two huge shots late, including a 3 with 13.5 seconds left that helped Oklahoma hang on for the win.

“We should have won the game,’” UNT coach Grant McCasland said afterward. “We didn’t have enough grit defensively. We have to be more physical to finish games.”

UNT will have a chance to show it is making progress toward that goal when it hosts UALR, one of its old rivals in the Sun Belt Conference.

The Trojans are 5-4 on the season and are a step down in competition from the teams UNT has faced thus far while posting a 3-6 record. The Mean Green have fallen to a pair of nationally ranked teams in VCU and Utah State in addition to Arkansas and Oklahoma.

Sophomore guard Umjoa Gibson scored 21 points in UNT’s loss to the Sooners and is averaging 15.0 points per game. He is the Mean Green’s only player averaging double figures.

UNT saw its performance offensively against Oklahoma as a positive sign. The Mean Green have excelled defensively all season while allowing 61.9 points per game and are looking to better complement that production on the offensive end.

“We are getting better offensively and are at our best when we can use our defense to spark us,” UNT guard DJ Draper said. “We’re moving in the right direction.”

UALR enters its game against the Mean Green coming off a 67-63 loss to East Tennessee State. Sophomore guard Markquis Nowell is averaging 20.3 points per game to lead three UALR players who are averaging double figures.

The UNT women (3-5) enter their game against ULL looking to bounce back after dropping their last two games in the Rainbow Wahine Showdown in Hawaii. The Mean Green lost to both Texas and No. 12 North Carolina State after opening the tournament with a win over Hawaii.

Senior post player Anisha George is averaging a double-double with 13.1 points and 10.8 rebounds per game to lead UNT.

The Mean Green could have their work cut out for them against the Ragin’ Cajuns, who are 6-1 on the season. ULL has won five straight behind Brandi Williams.

The sophomore guard is averaging 16.0 points per game.