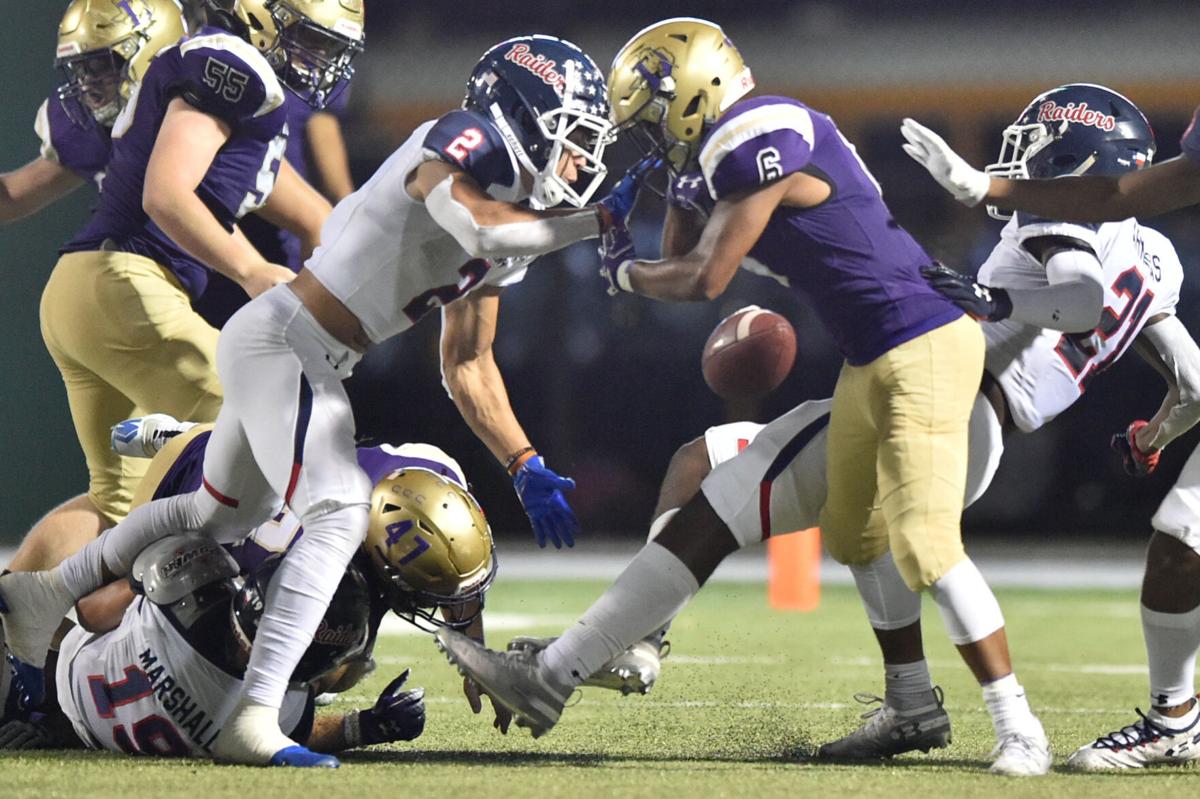 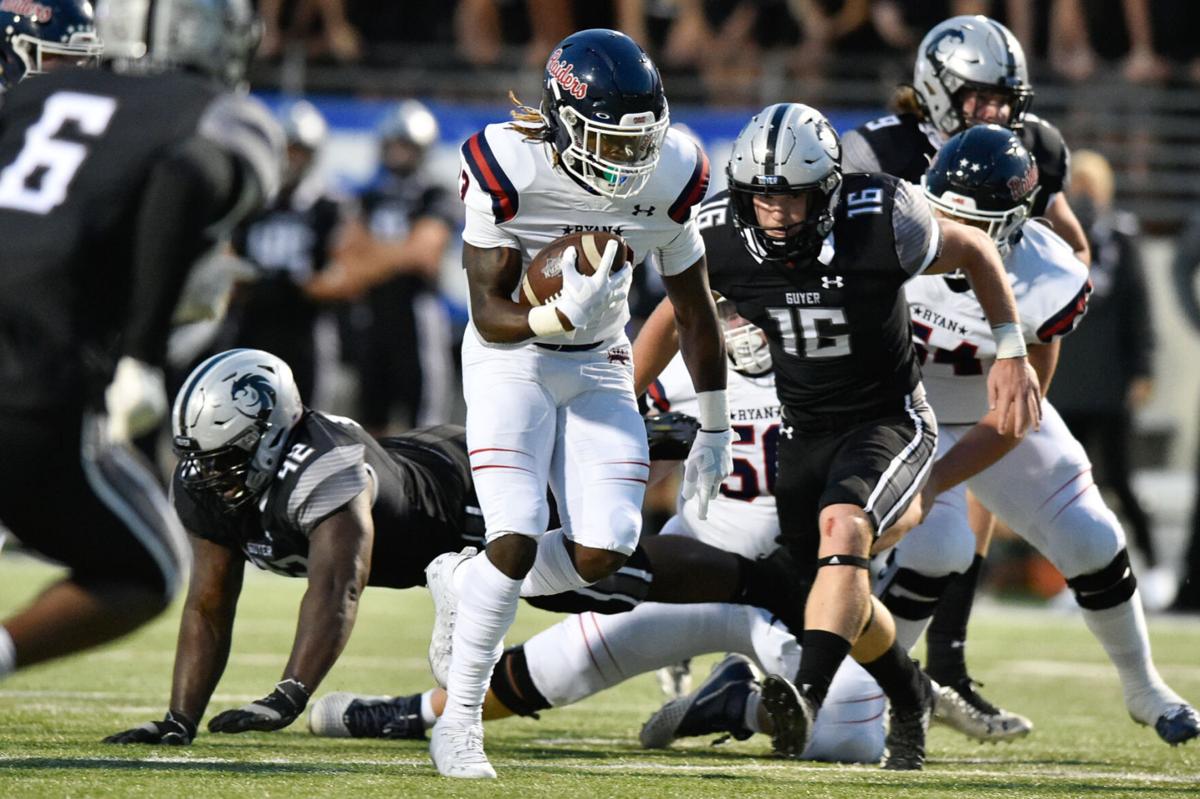 Ryan running back Ke’Ori Hicks (13) carries the ball while being chased down by the Guyer defense Oct. 2 at C.H. Collins Athletic Complex. 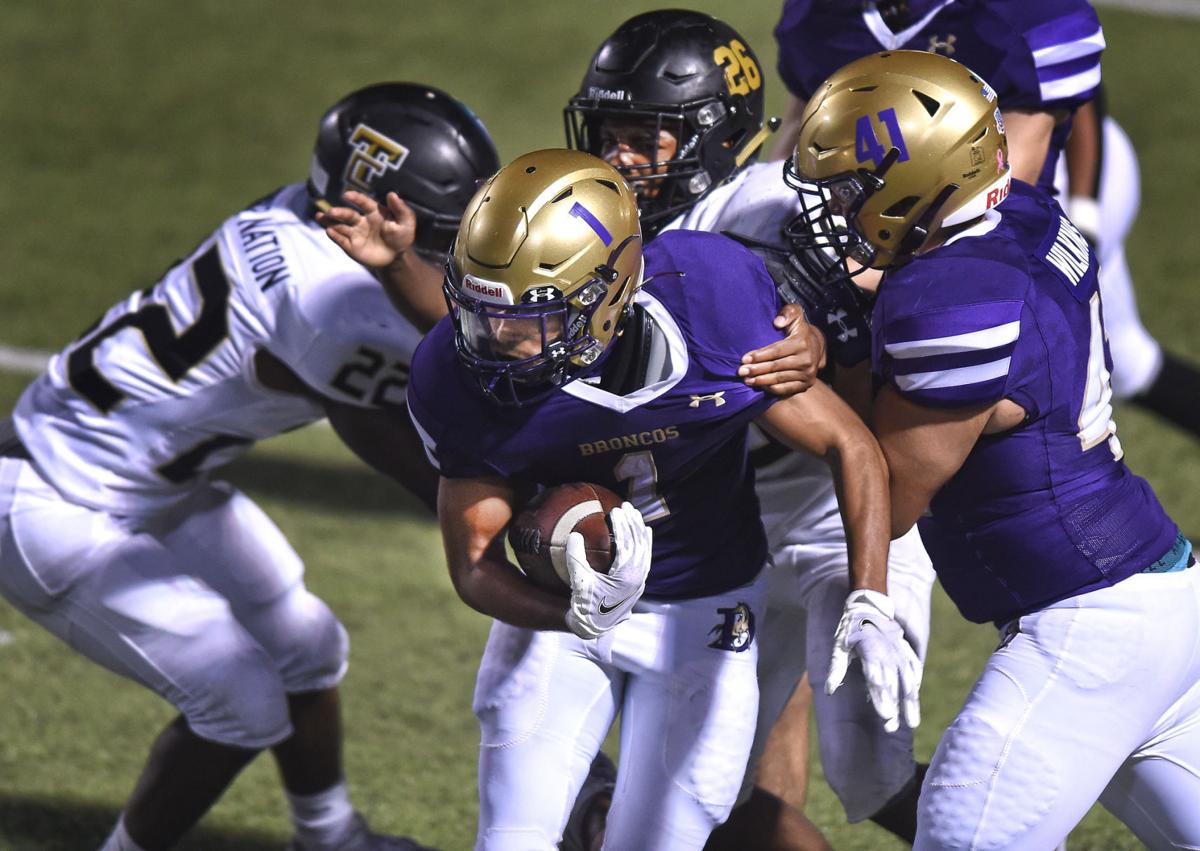 Denton’s Devin Barnett (1) breaks loose from The Colony defenders with the help of Ryan Wilkins (41) during their Oct. 9 game at C.H. Collins Athletic Complex.

Ryan running back Ke’Ori Hicks (13) carries the ball while being chased down by the Guyer defense Oct. 2 at C.H. Collins Athletic Complex.

Denton’s Devin Barnett (1) breaks loose from The Colony defenders with the help of Ryan Wilkins (41) during their Oct. 9 game at C.H. Collins Athletic Complex.

There wasn’t enough time to build the typical hype for this year’s District 5-5A Division I rival game between the Ryan Raiders and Denton Broncos. Four days ago, it wasn’t even going to be played — Ryan was in quarantine due to confirmed COVID-19 cases in its program, and Denton coach Billy Miller said his team was headed into bye week mode.

All of that changed Tuesday with the news that Ryan’s quarantine would end Friday, opening the door for both teams to get back on the field a day later than usual and add another chapter to the Denton school district’s oldest rivalry.

This is the 20th meeting between the two programs, with the Raiders leading the all-time series 16-3.

“It’s crazy how it all happened,” Miller said. “But we’re here, and we want to give our kids every opportunity to go play. It’s a crazy and special time when talking about rivalry games, and this one is no different. Our kids will be ready to play, and we’re excited to play the No. 1 team in the state.”

Ryan coach Dave Henigan agreed, saying that this has always been an important game for the community.

“It’s the oldest rivalry in Denton,” Henigan said. “Everyone wants to talk about the Guyer-Ryan rivalry, but the Denton-Ryan rivalry is the original. It’s encouraging that we get the chance to play it.”

For Ryan, being on the field against anyone is a relief — even on short notice.

After beating Class 6A teams Arlington Martin and Guyer to open the season, the Raiders’ first two district games against Frisco Reedy and Denton were originally voted to be counted as forfeits by the District Executive Committee for 5-5A DI since Ryan couldn’t play them.

At least one of them is being played now. According to Denton ISD athletic director Joey Florence, the Reedy game has been switched from a forfeit to a no-contest. This means Ryan’s record won’t be impacted.

In the meantime, Ryan hasn’t played a game since Oct. 2. It hasn’t practiced in person since Oct. 6.

Henigan said he and his coaching staff will hold a walk-through with players Friday after their quarantine officially expires at 4 p.m.

The Raiders are riding a 52-game regular-season win streak and come into Saturday averaging 416.5 yards and 35 points per game. Quarterback Seth Henigan, a Memphis commit, is coming off a monster game in which he rushed for 101 yards and added 109 more through the air with a touchdown.

The performance shows just how much this offense can throw at its opponents. The week before, Henigan threw for 222 yards and three touchdowns and was not a factor in the run game. Two of those scores went to Texas commit Ja’Tavion Sanders, who had 122 receiving yards in the 47-24 win over Martin. He also added a 69-yard interception return for a score.

Meanwhile, Ke’Ori Hicks has racked up 276 rushing yards and two touchdowns. Billy Bowman, who recently de-committed from Texas, is a threat on offense, defense and special teams.

“There is no question they have a special group of guys,” Miller said of Ryan. “But we feel like we have a good game plan, and we feel like our kids are going to be ready to play. We always are.”

Denton has started off strong in each of the past three meetings against Ryan only to get overwhelmed in the second half. Miller believes Saturday could be different thanks to a young core that has shown flashes of brilliance.

The Broncos lost to Lake Dallas in the season opener but responded with a win over Saginaw Chisholm Trail before losing to The Colony. In that game against The Colony, the Broncos only trailed 10-7 before the Cougars pulled away in the fourth quarter.

The Broncos’ defense is led by a slew of young impact players, including linebacker J.J. Mangel and defensive end La’Travious Brice. Offensively, running back Coco Brown has rushed for 297 yards and three touchdowns. Sophomore quarterback Blake Courtney took the reins in Week 2 and has been steadily improving each week.

“Defensively, they are flying around and putting themselves in the best position to be successful,” Henigan said. “Offensively, they are doing a lot of good things. They have a young core, but they are talented and are making a lot of plays in the backfield. You couple that with a short week of practice, and this game is going to be a challenge for us.”

What You Need To Know: Ryan vs. Denton