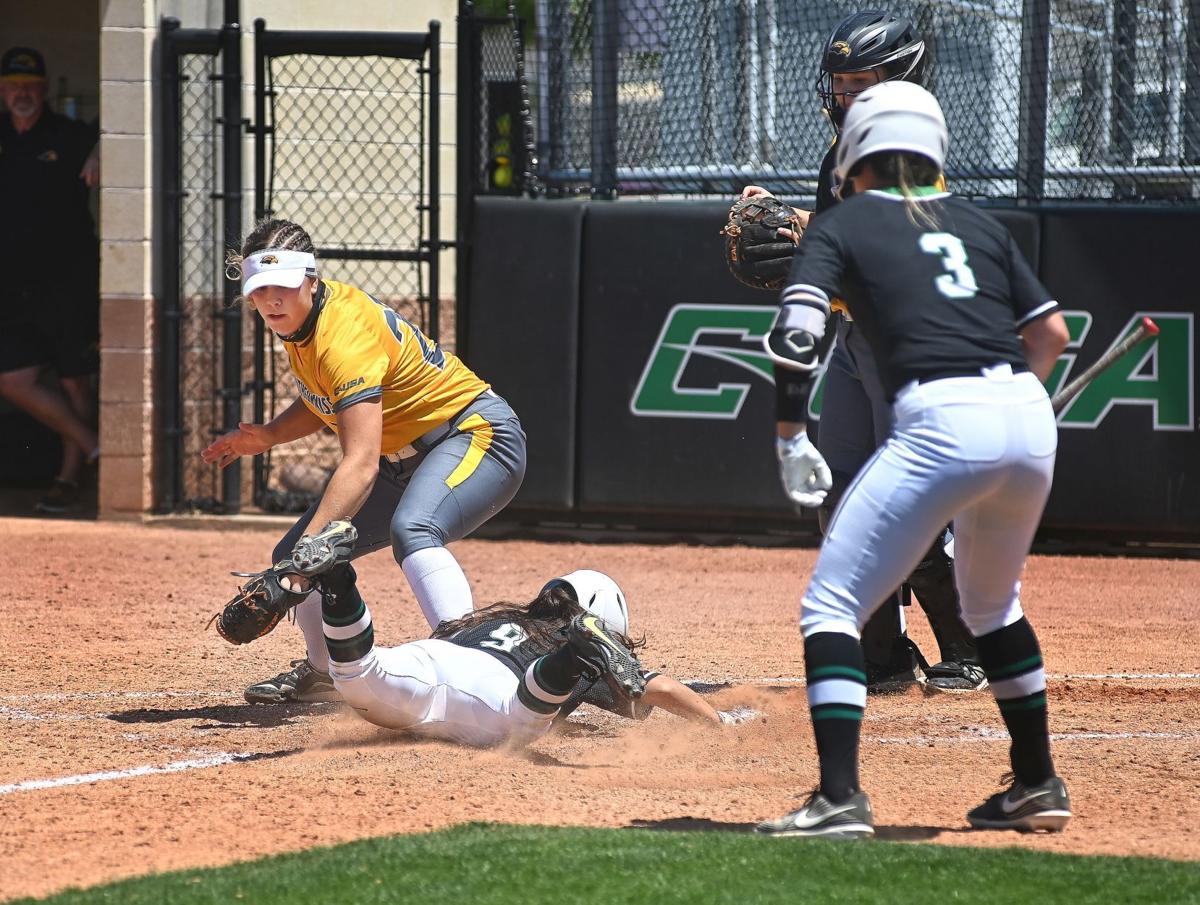 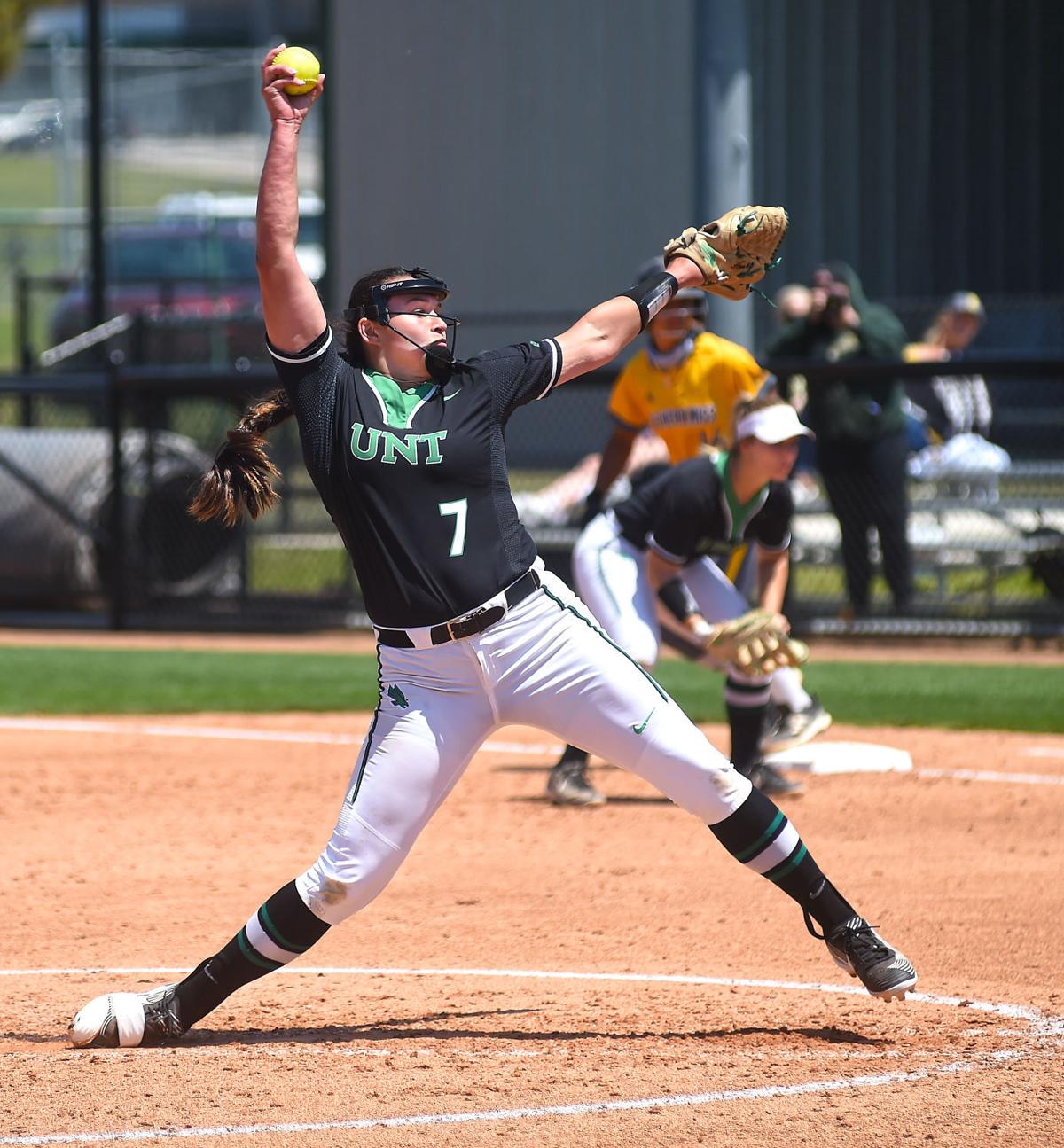 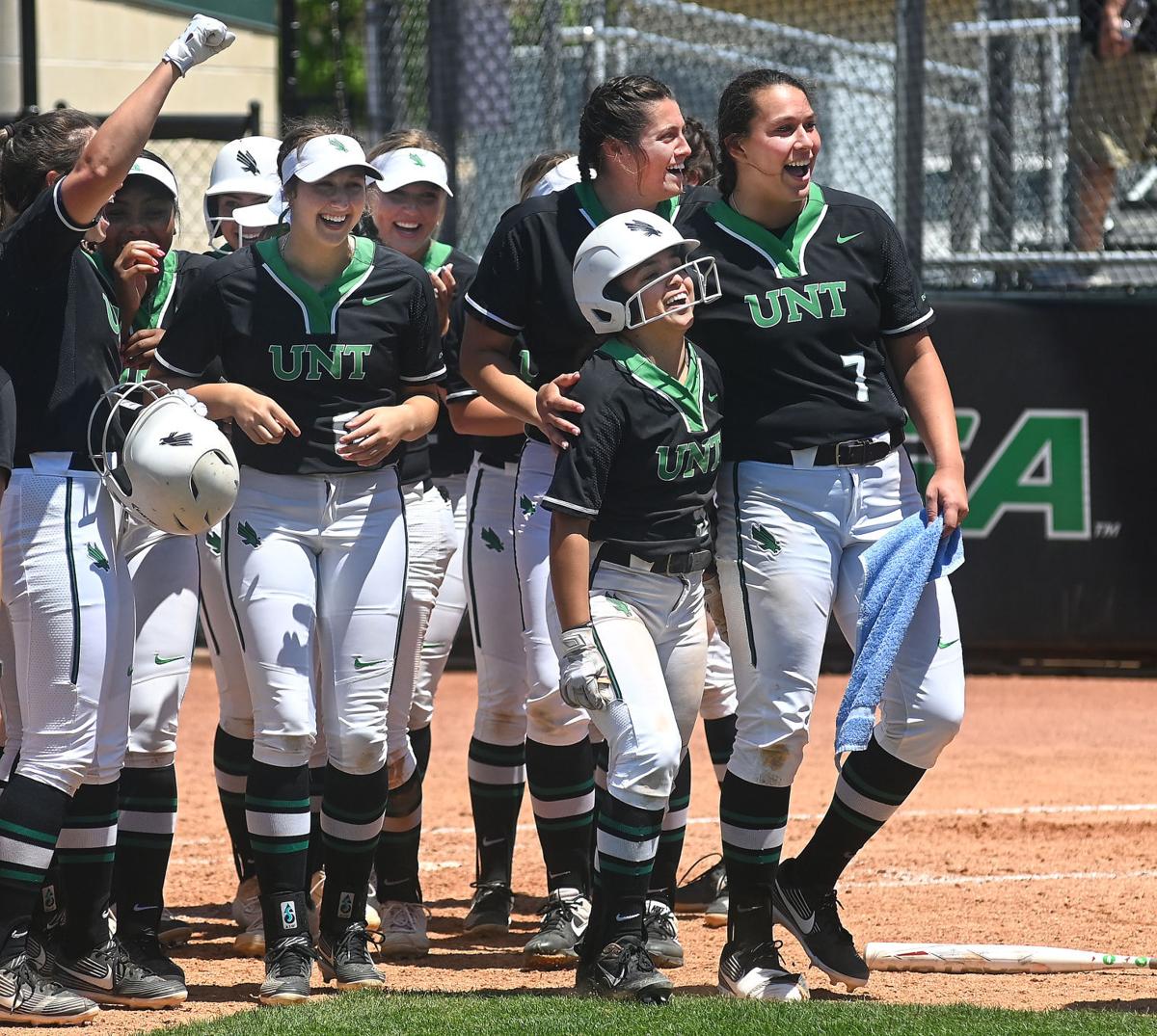 The Mean Green’s Miranda Holguin (9) is congratulated by UNT pitcher Hope Trautwein (7) and her teammates after sliding in to home safely to score the game-winning run in the bottom of the last inning on Sunday against Southern Miss.

The Mean Green’s Miranda Holguin (9) is congratulated by UNT pitcher Hope Trautwein (7) and her teammates after sliding in to home safely to score the game-winning run in the bottom of the last inning on Sunday against Southern Miss.

North Texas made its return to Lovelace Stadium worth it this weekend.

The Mean Green not only swept Southern Miss in a four-game series that marked their first home games since April 3. They made it interesting in the process, winning twice on Sunday, thanks in part to quite possibly the most entertaining 60 feet of base running so far this season.

UNT rallied from a two-run deficit in the bottom of the seventh inning of the opener and won 3-2.

Miranda Holguin finished it off when she charged down the third baseline on a wild pitch, fell, got back up, tried to get back to third, saw Southern Miss throw the ball away, turned back around and slid into home to score the winning run.

Walk it off and #LightTheTower! A wild end leads to a @MeanGreenSB victory and a series win over Southern Miss! pic.twitter.com/k3JLMlTtDu

UNT went on to complete the sweep with an 11-3 run rule victory.

“It was a great way to come back home,” UNT coach Rodney DeLong said. “We’re comfortable at home. It’s tough on teams when they come here.”

UNT (29-10) came into the weekend atop the Conference USA West Division standings and tightened its grip by moving to 10-2 in league play.

That was the bottom line when it came to the weekend, but all anyone will remember is what transpired on the third baseline to cap UNT’s win in the first game of the day.

UNT hadn’t done much of anything offensively the entire game and trailed 2-0 before Kailey Gamble launched a solo home run to right-center leading off the seventh inning.

“Gamble cut the lead in half and we still had three outs to work with, which was huge,” DeLong said. “She’s a talented kid who started the season off slow. People are starting to see the type of player she is.”

Rayna Lewis followed up with a single before DeLong called on Katy Truitt to pinch run. Southern Miss catcher Hannah Borden fielded a bunt attempt from Holguin and fired it down the right field line, allowing Truitt to score and Holguin to reach third.

Holguin scored the winning run a short time later, thanks to some nifty footwork after her initial stumble.

“My legs were trembling,” Gamble said of her reaction to Holguin’s trip from third to home. “I was yelling, ‘Go, go, go! I don’t care where you end up. Just go somewhere. Get up.’”

DeLong certainly didn’t expect the drama that ensued when Holguin broke for the plate.

“If she doesn’t stumble, we score easily,” DeLong said. “When they threw the ball away, it gave us another chance to get in there. It was crazy.”

Tuesday DerMargosian went 3-for-4 in the second game to spark an 11-hit barrage in four innings for UNT. The Mean Green scored eight runs in the fourth.

UNT had plenty of memorable moments during its extended road trip. Pitcher Hope Trautwein threw the first known 21-strikeout perfect game in Division I college softball history at Arkansas-Pine Bluff during the trip.

The Mean Green’s players certainly enjoyed those moments, but there was something special about being back home again.

“It made us calm down a little bit. We weren’t worried about anything and were relaxed in the box,” Gamble said. “We were looking forward to this 100%.”

Capitalizing made for a memorable homecoming. DeLong was especially pleased with how UNT rallied in the opener.

“We kept battling and finally in the seventh inning we got something done,” DeLong said. “We executed the bunt and ran the bases well. The difference in winning those games was executing.”

Holguin’s dash home to close the game might not have been exactly how DeLong drew it up, but it was a dramatic moment in what turned out to be a perfect weekend for the Mean Green.