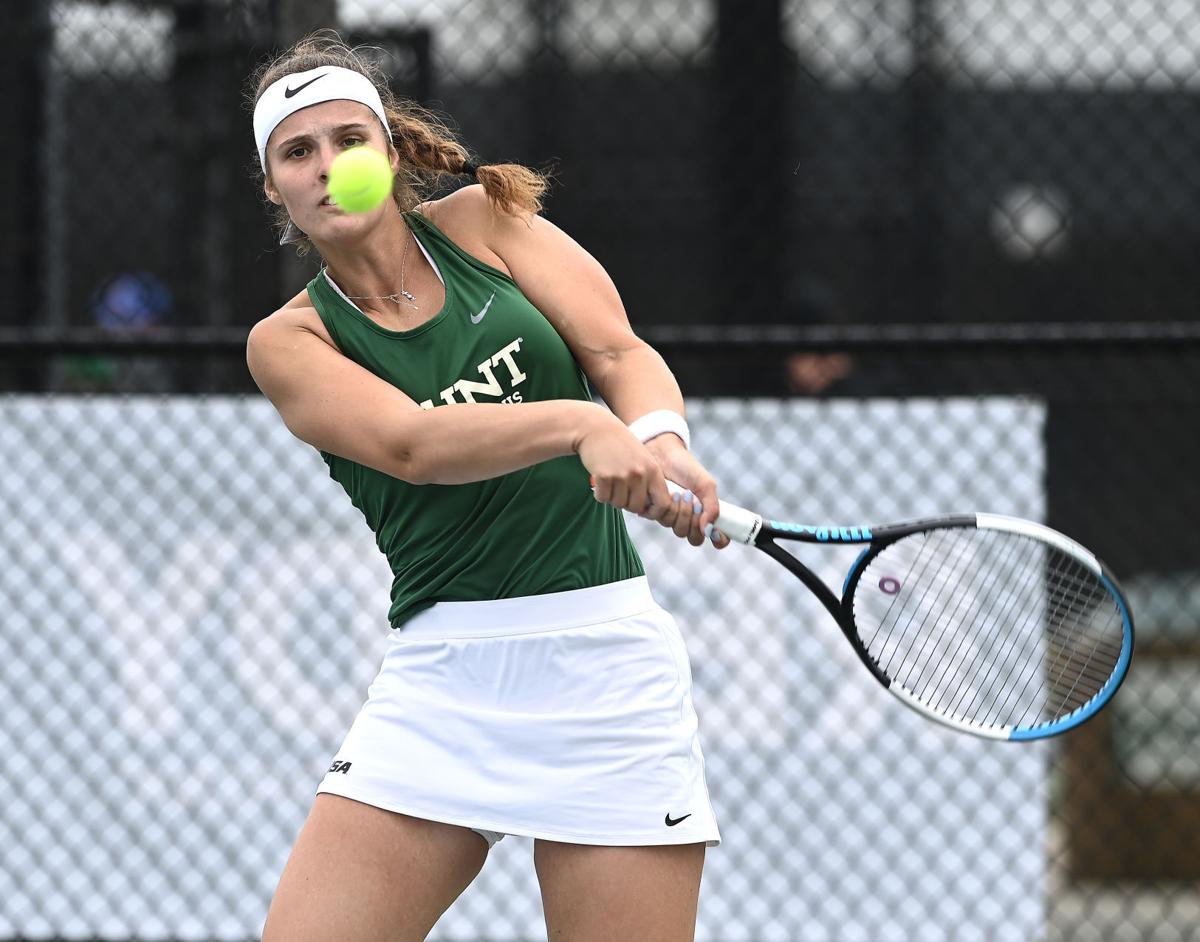 The Mean Green’s No. 1 singles player, Lucie Devier, hits a backhand in their match against Florida Atlantic on Thursday at Waranch Tennis Center. 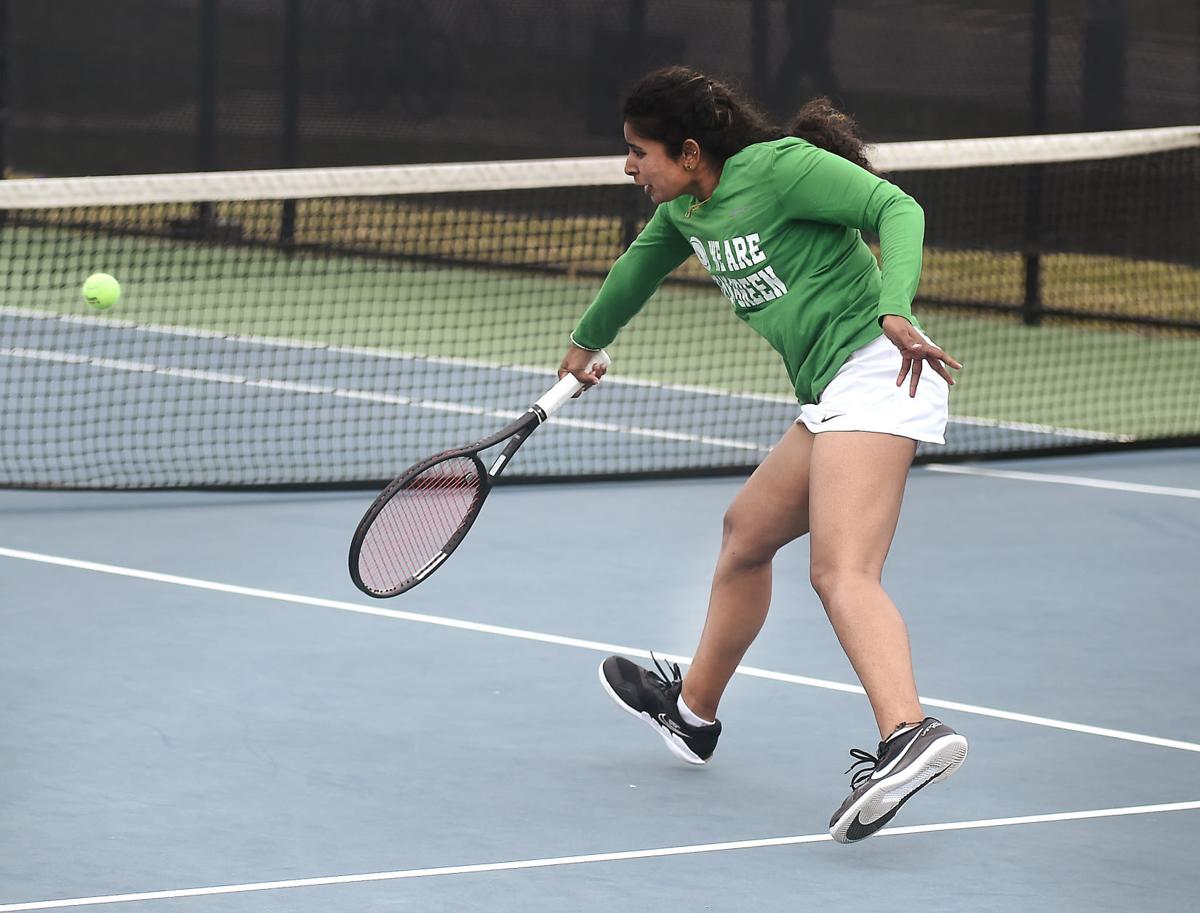 The Mean Green’s No. 3 singles player, Nidhi Surpaneni, backhands a volley in their match against Florida Atlantic on Thursday. 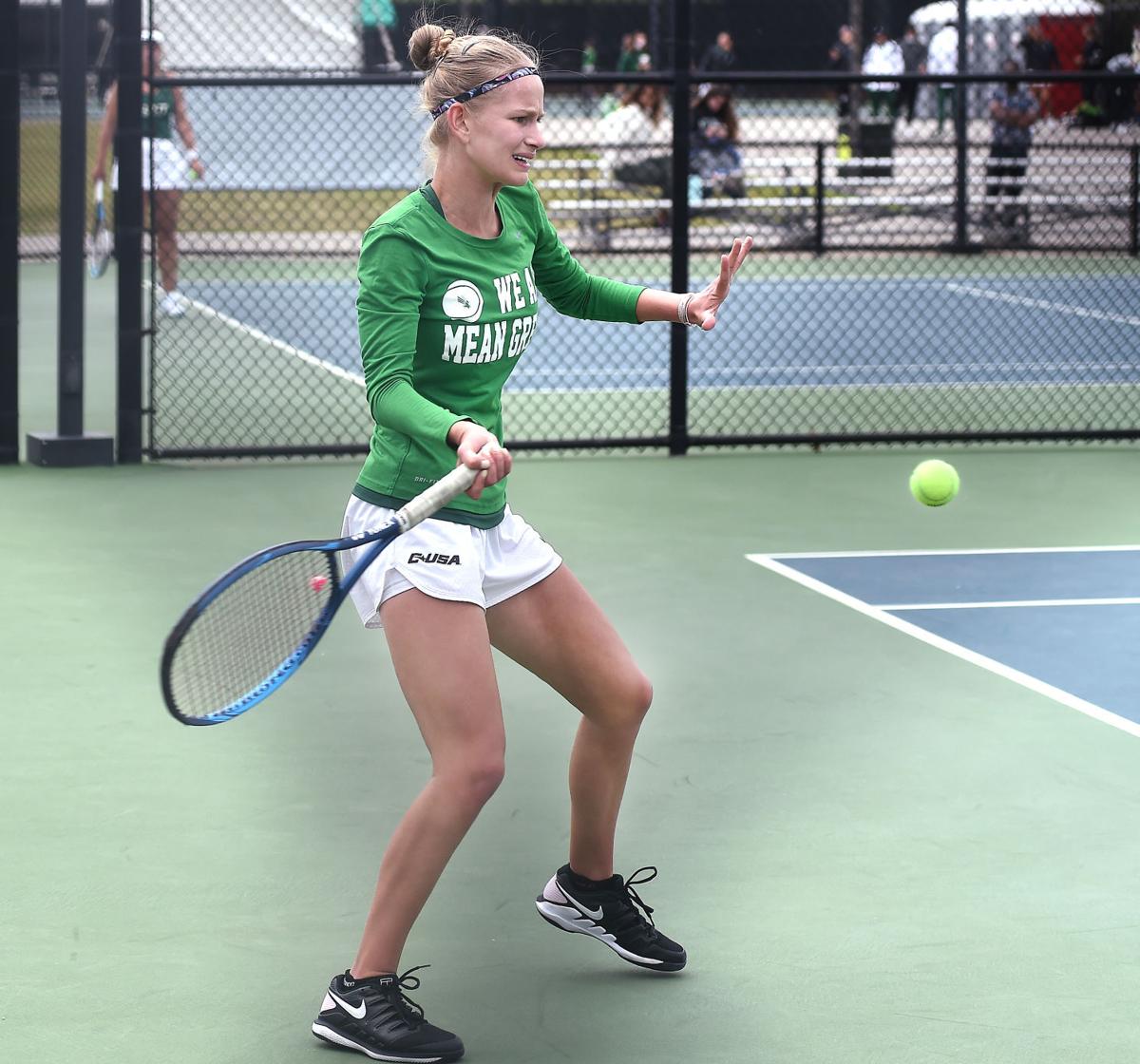 The Mean Green’s No. 2 singles player, Maria Ponomareva, hits a forehand in their match on Thursday against Florida Atlantic.

The Mean Green’s No. 1 singles player, Lucie Devier, hits a backhand in their match against Florida Atlantic on Thursday at Waranch Tennis Center.

The Mean Green’s No. 3 singles player, Nidhi Surpaneni, backhands a volley in their match against Florida Atlantic on Thursday.

The Mean Green’s No. 2 singles player, Maria Ponomareva, hits a forehand in their match on Thursday against Florida Atlantic.

North Texas was right where it wanted to be early in its opening-round match against Florida Atlantic in the Conference USA tennis tournament on Thursday.

Nidhi Surapaneni and Maria Ponomareva rolled to a 6-0 win at No. 2 doubles, while Sophia Hummel and Kexuan Zhou quickly built a 5-1 lead at No. 3 doubles.

It was all downhill from there for the Mean Green in a 4-1 loss to the Owls at Waranch Tennis Complex.

UNT lost its match at No. 1 doubles and let its lead slip away at the No. 3 doubles spot, where FAU’s duo of May Kimhi and Katerina Filip rallied to force a tiebreaker and pulled away for a 7-6 (7-5) win.

The Mean Green, the No. 12 seed in the 14-team tournament, lost the doubles point as a result. UNT needed to win four of the six singles matches to complete a comeback against FAU, the No. 5 seed, and fell short.

“That was the turning point, when we didn’t put the hammer down in doubles,” UNT coach Sujay Lama said. “When they come back from that type of a hole, they’re going to come with confidence in singles. They have some really good players. It was tough to get the matches we needed.”

UNT’s lone win came at No. 2 singles, where Ponomareva took down Natalia Boltinskaya 6-2, 6-1.

Natalia Kallmunzerova clinched the match for FAU when she beat Saki Oyama 6-2, 6-3 at No. 5 singles.

“We’re pretty upset,” Ponomareva said. “We were hosting and had a big advantage being at home on our court.”

UNT’s season unfolded a lot like its match against FAU. The Mean Green (6-13) had high hopes coming into the year but ran into a host of issues and never really got on track outside of a four-match winning streak late in the season.

UNT had just six players available due to a combination of injuries and players opting out of the season due to the COVID-19 pandemic.

“It was a difficult season with six people,” Lama said. “We didn’t have depth and had to be careful with injuries.

“What we did, which the wins and losses didn’t reflect, is show we were resilient. We did a lot of great things and built the culture of the program. We had one bad match the entire season at Rice. Our players fight and give their best. We never gave up.”

UNT has just one senior on its roster in Surapaneni and gained experience while tackling a tough schedule. The Mean Green faced several nationally ranked opponents, including Texas, Baylor and SMU.

“We can build from this season for sure,” Ponomareva said. “We learned a lot and improved our level of play.”

Lucie Devier played No. 1 singles in her first season with the program after transferring from Tyler Junior College.

The Mean Green are hoping what they learned will help them be in a much better position next season.

“We have my best recruiting class coming in and have some key pieces on this team,” Lama said. “Lucie is developing into a really good player, and Maria is strong at No. 2. We’re bringing in some good players, but right now we’re sad that we couldn’t advance.”