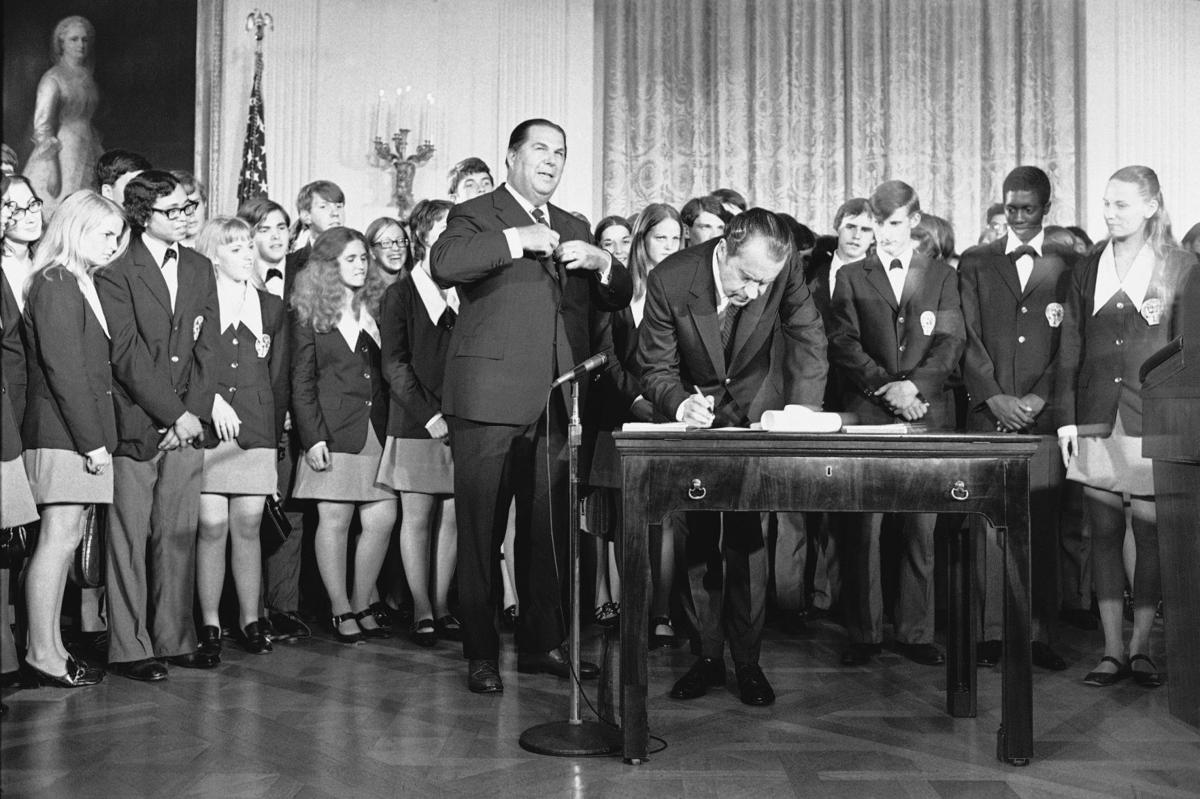 On July 4, 1971, President Richard Nixon signs the 26th Amendment to the Constitution, guaranteeing 18-year-olds the right to vote in all elections. Robert Kunzig, general services administrator, waits to officially certify ratification of the amendment in East Room of the White House. Paul Larimer of Concord, Calif., a member of the singing group Young Americans, also signed the amendment. 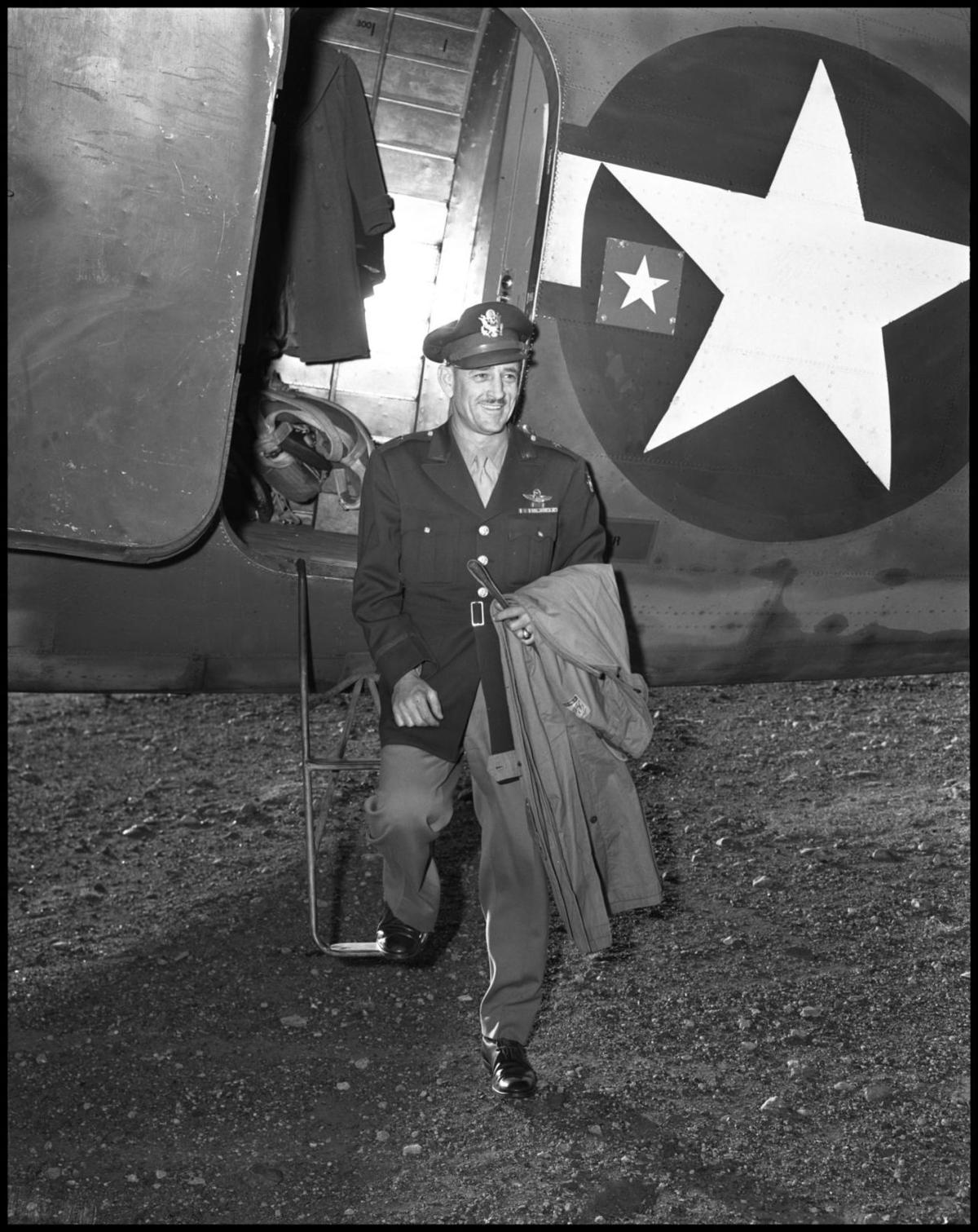 Gen. Roger M. Ramey, a North Texas State alumnus, gets off a military plane in a 1957 photo.

On July 4, 1971, President Richard Nixon signs the 26th Amendment to the Constitution, guaranteeing 18-year-olds the right to vote in all elections. Robert Kunzig, general services administrator, waits to officially certify ratification of the amendment in East Room of the White House. Paul Larimer of Concord, Calif., a member of the singing group Young Americans, also signed the amendment.

Gen. Roger M. Ramey, a North Texas State alumnus, gets off a military plane in a 1957 photo.

Denton fair closes with plans to get bigger

Before the final curtain had closed on Denton County’s annual livestock and agricultural fair, plans for an even bigger and better fair for next year were being discussed.

Quite a few local persons have offered to subscribe for stock in a Fair Association to purchase grounds and erect buildings, according to H.F. Browder, secretary of the Chamber of Commerce, under the auspices of which the fair was held.

The first fair organized by the Chamber of Commerce, held in 1917, attracted a large crowd and was very successful. It was planned to continue, but in 1918 war conditions were such that it was felt nothing of that nature should be attempted. In 1919, conditions were still unsettled.

Numbers of farmers and stockmen who had no exhibits here this year assured Mr. Browder that if a fair is held next year, they will begin early on preparing exhibits.

Some move may be taken soon toward arranging for a permanent annual exhibit of agricultural products and livestock.

THE SALVATION ARMY HELPED OUR BOYS IN WAR. Now they are engaged in the great war against poverty, disease and suffering. We must keep up their work of mercy. Thursday, October 7, is Salvation Army Day for Denton. Denton County’s quota is $3,300. Denton has always gone over the top in every drive. Let’s not fail this time.

The Rotary Club entertained by the ladies of the First Baptist Church on Thursday, approved the appointment of a committee to outline plans for the financing and building of a sanitarium in Denton.

The committee, which consists of Dr. P. Lipscomb as chairman, M.W. Deavenport, F.M. Bralley, Bala Williams and John Speer, was promptly called to meet at Dr. Lipscomb’s office at 7 o’clock Thursday night to begin at once on its plan.

NOTE: The sanitarium/hospital was built in 1925 on South Locust Street. The building is still there.

Brig. Gen. Roger M. Ramey, commanding general of the 58th Air Force wing who is visiting his parents, Mr. and Mrs. M.L. Ramey, 519 North Locust in Denton, declared that, “the war was practically over when the atomic bomb came out.”

The West Point graduate who is a staunch supporter of air power, and an alumnus of Denton High School, Gen. Ramey enlisted in the Army Air Force in 1928 and was sent to the Pacific for the first time in 1938 as commander of a pursuit squadron.

Gen. Ramey pronounced the B-29 as “the most wonderful plane ever.” He led bombing raids on Japan from India, 3,000 miles away.

“I flew at low altitude over all the places our planes hit at the end of the war,” he said, “and they were just like Hiroshima and Nagasaki — as flat as this floor.”

Denton today joyfully answered the end of shoe-rationing by going on an all-out spending spree that doubled, and in some cases, tripled the business at local shoe stores.

Both men and women led by bands of college students opened the spree early today. Merchants were selling two and three pairs of shoes to a customer and were preparing for an even larger sale during the late afternoon hours.

Merchants, naturally elated over the long-hoped-for release, seemed happier over the prospect of finally getting rid of cheap shoes they had not been able to sell during the ration period.

Denton County will join other Texas counties this year by accepting voter application from 18-year-olds.

However, County Tax Assessor-Collector George Lasater says, those 18-year-olds applying for voter’s registration certificates will have to wait until the Supreme Court rules on the constitutionality of a recently passed law before they are certified to vote.

The process, as approved by the Texas secretary of state, will involve mailing out the applications to 18-year-olds but not issuing a certificate until the Supreme Court rules in favor of allowing them to vote.

A part of the election code requires students living away from home to register in their hometown to vote and not in the voting area they live in while attending school — unless the student has become a bona fide resident of the place and plans to remain there indefinitely after ceasing to be a student.

Park board taken to task over cemetery

Mrs. Madge S. Davis, alternate chair of the Business and Professional Women’s Club, took the Denton Parks and Recreation Department board to task for delays in completing the restoration of Oakwood Cemetery.

The BP&W has contributed $1,600 in financial aid and countless hours the past three years working at the cemetery. Mrs. Davis pointed out that veterans of practically every war, including the Civil War and Vietnam are buried there, along with prominent citizens of Denton, congressmen and mayors.

“They are entitled to a respectable grave site,” she said, noting that the 100-acre cemetery was donated to Denton and the city was to maintain it.

The department will install a water sprinkler system in the cemetery this winter, and the board assured Mrs. Davis all work will be completed by next Labor Day.

Fireworks whistled and popped in the first moments of a conflagration that destroyed Delta Lodge on Tuesday night.

Firefighters responded to a call to check out smoke in the building at 7 p.m. By the time the first unit arrived eight minutes later, the house was fully in flames. Fire shooting skyward could be seen from as far away as Interstate 35.

Interim Fire Chief James Thomason was at a City Council meeting to discuss Denton not having enough firefighters when he was called to the scene. He called in all off-duty firemen and asked for help from the Argyle and Mayhill departments.

Firefighters were never able to make an interior attack because of the intensity of the flames. The 90-year-old building was a total loss.

Delta Lodge residents gathered on a nearby club parking lot, hugging, crying and drinking beer. One man lay on the pavement with his arms outspread.

“This is all a dream — isn’t it?” he asked no one in particular.

Courtney Loofbourraw recalled the Delta Lodge, an unaffiliated fraternity, as a place where people accepted each all as others in the crowd echoed her comments and recalled happier times spent in the lodge. That views were not shared by all.

The house had a history of many incidents involving the police, but despite how people felt about Delta Lodge, most agreed it was a Denton monument that added something to the city.

“We’ve lost a big part of a small thing to what we’ve got here,” said Billy Foster.

Denton County Commissioners pledged Tuesday to install sprinklers in the County Courthouse on the Square to protect the historic building from being destroyed by fire.

“It’s a significant landmark for the county,” said John Scott, director of facilities management for Denton County. “We want to make sure we don’t run into a situation like in Hill County.”

The Hill County Courthouse was destroyed by a New Year’s Day fire in 1992. Officials there continue working to restore the building. Closer to home, a fire last year destroyed several businesses across Elm Street from the Denton County Courthouse.