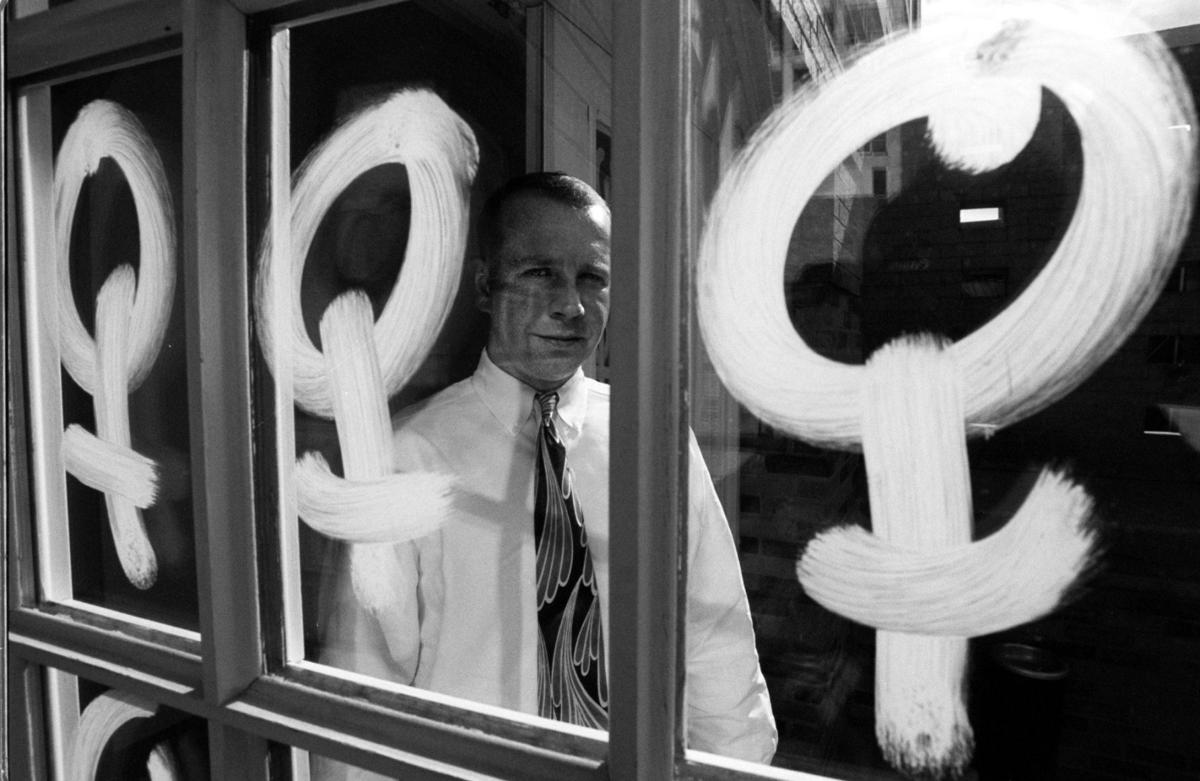 Sam Childers was the first man to enroll in general Texas Woman’s University classes and the first to graduate. He’s shown in January 1995 looking through a door with shoe polish graffiti painted by protesters. 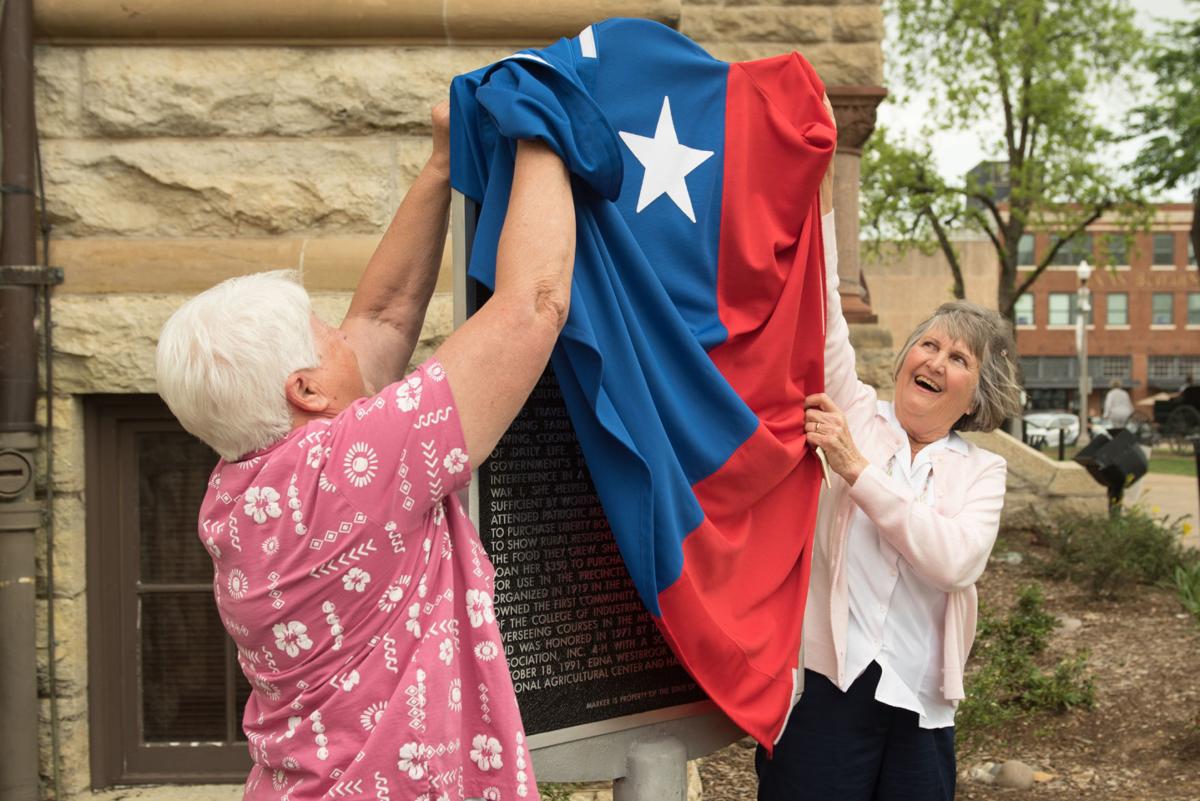 Toni Osborn, left, and Sue Williams unveil a Texas Historical Marker honoring Edna Westbrook Trigg, the first home-demonstration agent in Texas, in 2016 outside the Courthouse on the Square. Trigg retired 75 years ago, in August 1945. She died in 1946 and is buried at Denton’s I.O.O.F. Cemetery. 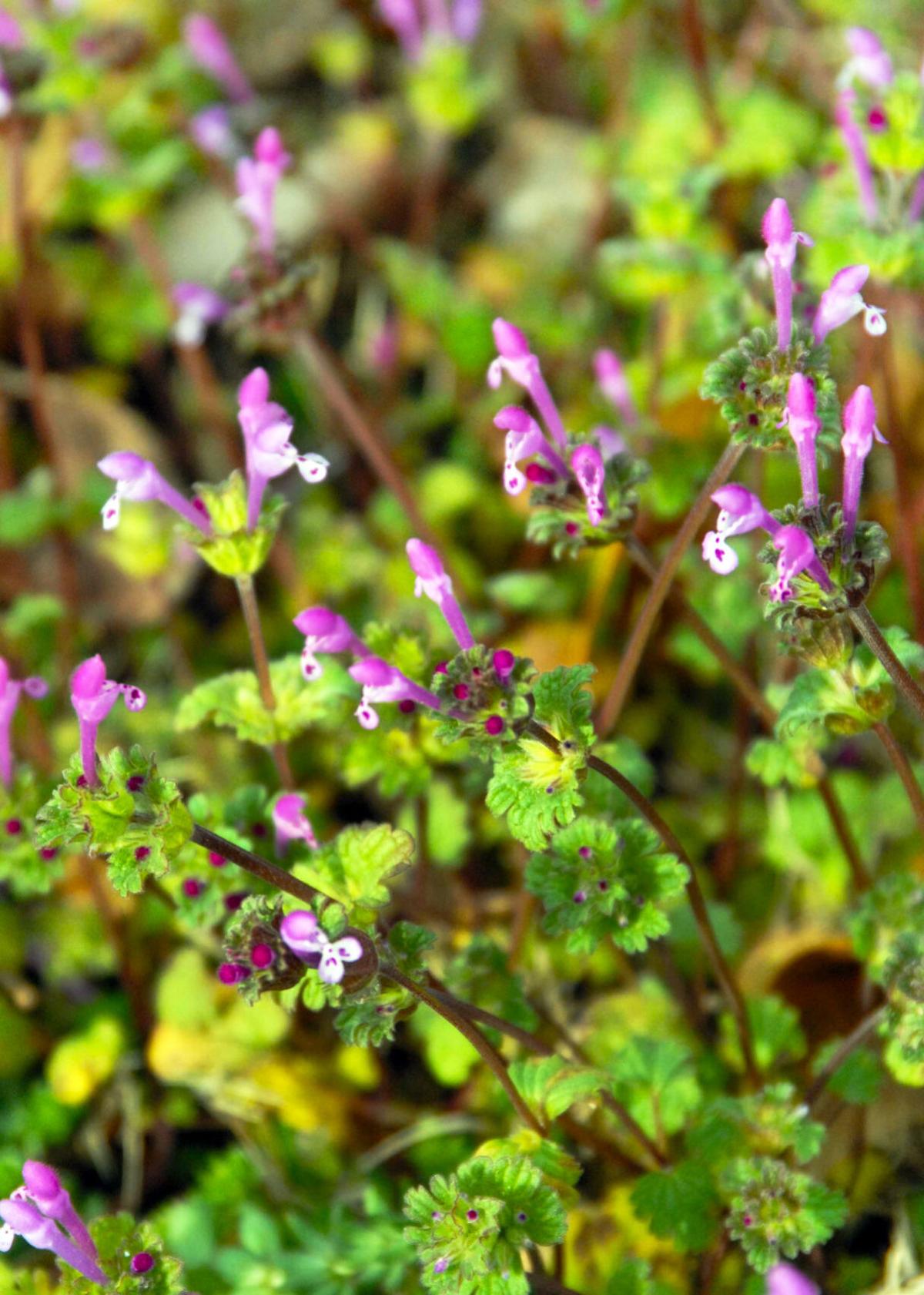 A century ago this month, the city of Denton issued an ultimatum to “weed farmers” — property owners of land with “rank growth of weeds.”

Sam Childers was the first man to enroll in general Texas Woman’s University classes and the first to graduate. He’s shown in January 1995 looking through a door with shoe polish graffiti painted by protesters.

Toni Osborn, left, and Sue Williams unveil a Texas Historical Marker honoring Edna Westbrook Trigg, the first home-demonstration agent in Texas, in 2016 outside the Courthouse on the Square. Trigg retired 75 years ago, in August 1945. She died in 1946 and is buried at Denton’s I.O.O.F. Cemetery.

A century ago this month, the city of Denton issued an ultimatum to “weed farmers” — property owners of land with “rank growth of weeds.”

Weed farmers given their final notice

Owners of lots, vacant or occupied, where there are rank growth of weeds have received their last warning to cut the weeds, City Attorney T. B. Davis said Friday. He will begin prosecution under the state law which does not require a five-day written warning before charges can be filed.

About 100 persons have been notified to cut weeds and where they are doing all that they can to get them cut no action is brought against them. But where “weed farmers” have apparently taken no notice of the warnings and requests to clean up their lots, charges will be filed.

Two Days Commencing Tomorrow — John Barrymore in “DR. JEKYLL AND MR. HYDE.” The greatest drama of dual identity ever written. The greatest piece of character acting ever filmed. Dr. Jekyll, a lover and a gentleman. Mr. Hyde, a rogue and a brute. Both of them one man! Two famous beauties in the cast—Martha Mansfield and Nita Naldi. Filmed from the world-famous romance by Robert Louis Stevenson. Don’t miss this wonderful attraction at the PRINCESS THEATER. Prices 10 cents and 25 cents.

A leap of fourteen feet was made here Saturday afternoon by B.G. Cloninger in an Overland automobile before an enormous crowd at the cotton yard on East Hickory Street. The purpose of the demonstration was to show the durability of the tri-plex springs used on the car. A regular stock car was used in the feat it was said.

A short incline was built on each side of the fourteen-foot span over which the car leaped. The car was run a distance of several hundred feet and went up the first incline and landing on the second. After the feat the car was exhibited to the crowd to show it was not damaged and that no springs were broken.

A crowd at perhaps 2,000 people witnessed the performance.

The car, with the body taken off, is to be exhibited in the show windows of the Simpson-Cloninger Motor Company, local Overland agents, to demonstrate that no damage resulted.

Electrified by the long-awaited news that the Japanese had finally surrendered unconditionally to the Allies, all Denton County turned out Tuesday night in a spontaneous celebration that flamed immediately after the official announcement at 6 p.m. and lasted until nearly midnight.

Despite the gasoline and tire shortage, cars and trucks of every description poured into town carrying loads of shouting, whistling, cheering and flag-waving men, women and children.

College students and townspeople without cars joined the celebration on foot and by 8 p.m. the square was filled with jubilant celebrators.

While the crowds gathered, military marches and popular war songs of both the first and second world wars were played by the TSCW band.

Denton police and county officers said that the celebration was one of the most orderly ever observed in Denton. Neither office received a single call during the night for any reason.

NOTE: Japan announced it would surrender on Aug. 15, 1945 but, postponed the official signing of its surrender until Sept. 2, 1945 when the unconditional terms of surrender were signed aboard the USS Missouri.

Col. Carl R. Storrie of Denton, commanding the 314th Wing, led his planes against Kumagaya today as the B-29s struck in their final mission against Japan before President Truman announced Japan had accepted surrender.

The planes were returning to their bases when the announcement of Japan’s surrender was announced.

The attacks were accomplished by radar through an undercast of clouds. This was the first mention of radar in an official Army press release.

She had been county home demonstration agent emeritus with part time work here since 1938.

Mrs. Trigg has vacated her office at the courthouse, relinquishing the entire work to Miss Nena Robertson, who has held the post since Mrs. Trigg’s partial retirement.

The residents of Lewisville and Argyle have had completely dry taps, and Sanger has been forced to curtail water usage with alternating lawn-watering schedules.

Lewisville has been hardest hit by the long, dry summer. A pump failure in early July started a shortage that reached a climax Sunday night when faucets quit giving water.

A pump failure in Argyle also started that city’s crisis, which has since been hampered by two broken water lines.

The inoperative pump at Argyle was the second one to go out in a 10-day period and manufacturer’s representatives are expected to deliver a report about the cause of failure to the city this week. City officials emphasize that there is “nothing wrong with the well.”

Meanwhile, all of the area cities are anxiously watching the clouds, hoping that gray skies will cure the brown grass and try not to recall 1957 when an excessive drought dried up several water systems.

Denton is on its way to getting a new fire station in a triangle bordered by McCormick, Avenue A and Underwood Streets.

City Council accepted a bid of $111,941 from Bert Moore Construction Company, Denton, to build the facility.

Although the bid was some $12,000 over what the city anticipated spending, City Manager Jim White explained that a firehouse was sold recently by the city to provide funds for the new one, and that a 40-year-old firehouse will be closed. Construction costs could be cut by decreasing door size, but it is expected Fire Department will have “snorkel” trucks one day and that this should be considered in the building plans.

“The state has warned us,” said White of the old facility, “and we’ve also been warned to get aerial facilities.”

Councilman Harold Ramey said he had been concerned for some time about the possibility of a fire in the universities’ multi-story buildings and he was relieved to hear that aerial equipment is planned for the Fire Department.

The dynamics of the Texas Woman’s University campus likely won’t change when fall classes begin; only a small number of men have sought to enroll so far.

About 180 men have applied to attend the fall semester, which will be the first to have male students in undergraduate programs. Previously, men could only be admitted to some graduate programs.

After TWU regents voted in December to open all university programs to men, some students and faculty members angrily protested, later filing a lawsuit against regents. The lawsuit will go to court this fall.

“We’ve had inquiries, walk-ins and people asking for information,” said Dr. Paul Travis, TWU’s dean of enrollment management, “but there’s no data that supports a large enrollment jump at this time.”

Officials said they were not surprised by the low number of men who have applied.

“For one thing, I don’t think there was a great pent-up demand of males waiting to get into TWU when the policy was changed,” said Dr. Keith Swigger, dean of library and information studies.

Also, many men probably are reluctant to attend a university whose mission is primarily to serve women, he said.

“There are a lot of guys who probably are real uncomfortable with the thought of having a degree that says ‘Texas Woman’s University’ on it,” Dr. Swigger said.

Dr. Travis said he believed men’s enrollment into TWU would gradually increase over a long period of time.