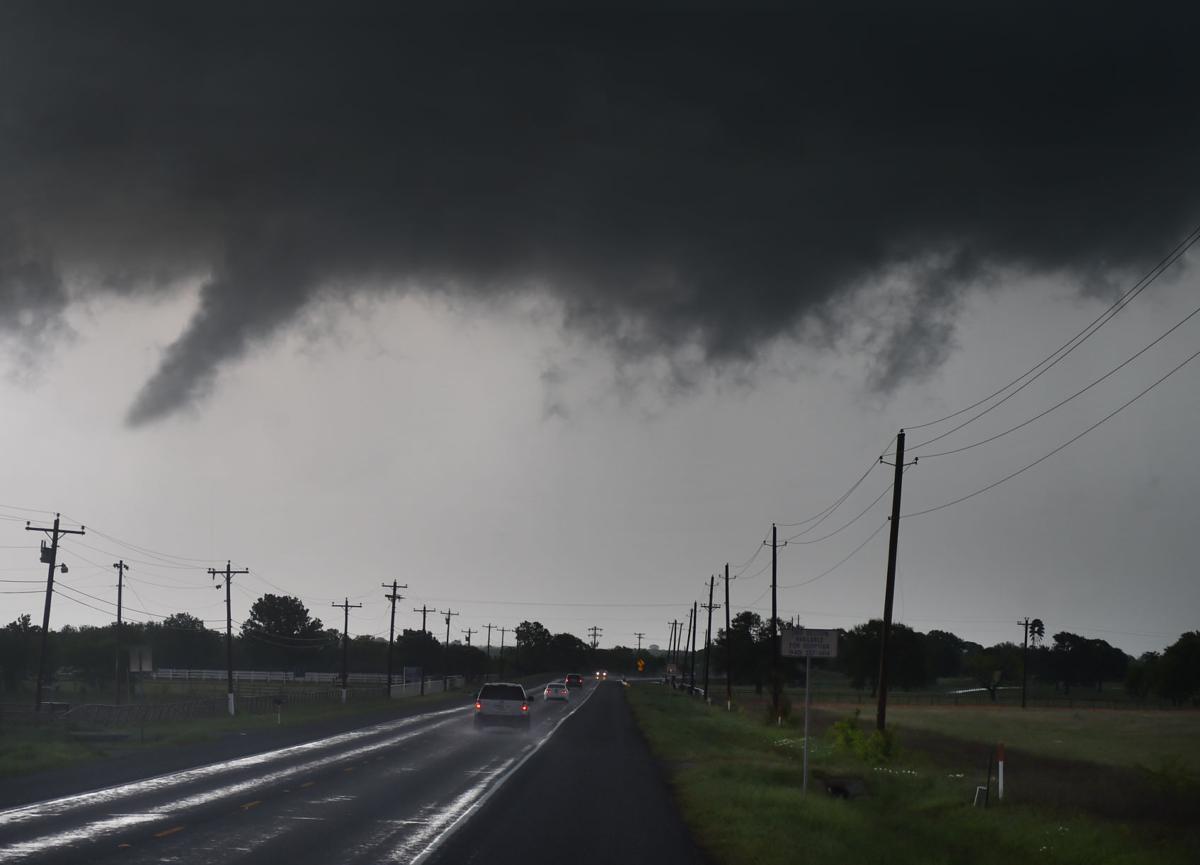 A possible tornado funnel hangs over FM 428 between Denton and Aubrey on April 23. An ad a century ago this month reminded residents to consider tornado insurance during the stormy season. 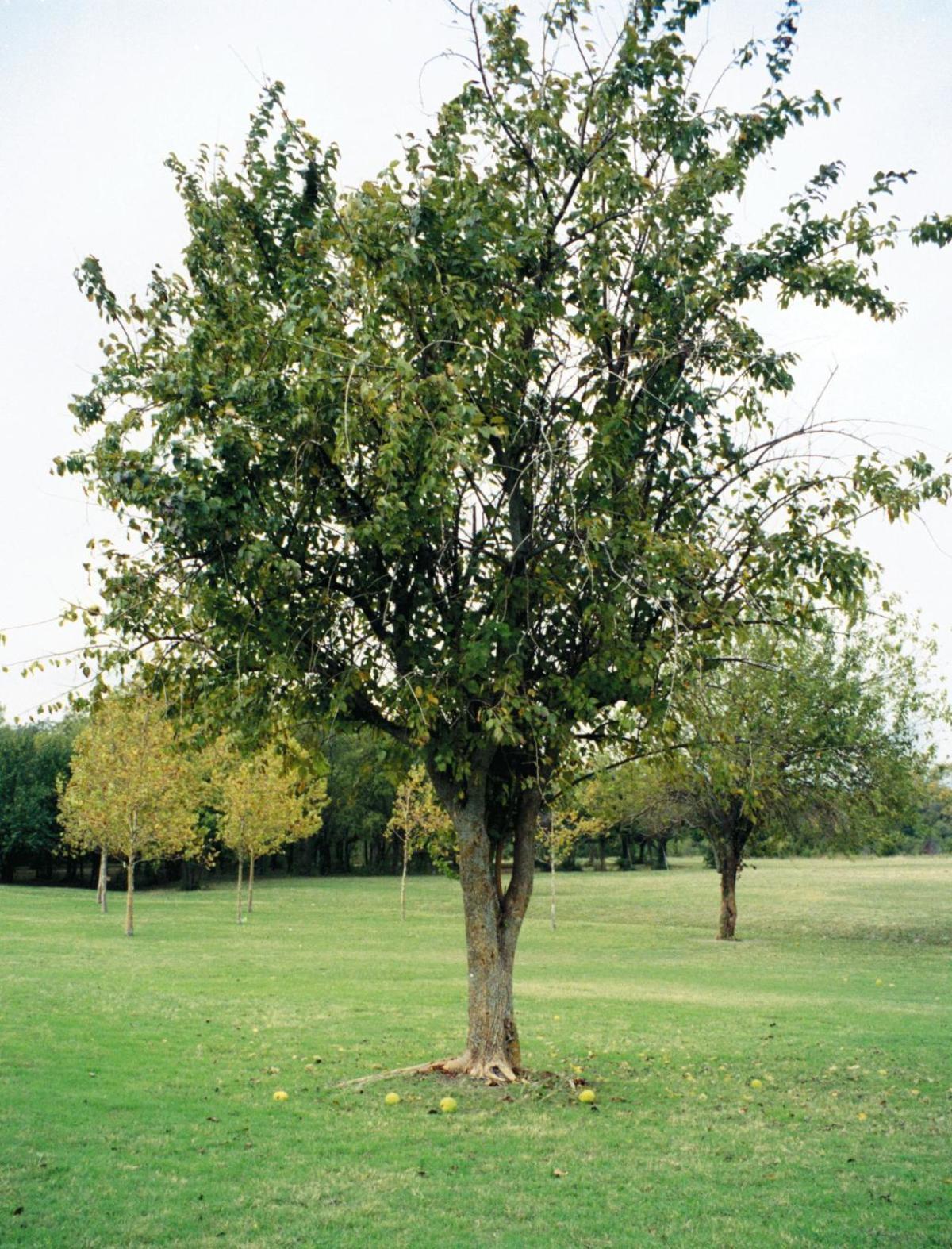 Ad: Are You Fully Covered With Tornado Insurance? During These Stormy Months?

You should profit by the sad experience of those near you and insure today.

We write all kinds of Insurance. See us.

Also see us for loans on Farm Land at once.

Mrs. Lee E. Johnson, president of the Garden Club, and Mrs. C. N. Adkisson, member of that organization, both lovers of beauty in Denton, have expressed the hope that the old bois d’arc tree that stands on the Pascall lot on North Elm may be saved. The lot has recently been bought by two Denton physicians with the intention of building a clinic there, and these two and many other people hope it may be possible for the building to be erected without destroying the tree. They believe that it will add to the attractiveness of any future building there. The tree is probably the oldest bois d’arc in Denton, some people believing it to be more than 100 years in growth.

Woman gets pay but she can’t serve

Although women are not allowed to serve on juries in Texas, one Denton county woman today had received the usual $4 pay for such service.

District Clerk Clarance Maxwell said today that he had paid $4 to Mrs. Jack Brooks of Argyle, who appeared in court Tuesday and took her place with the men in the jury box after she had been supposedly summoned to appear by different jury commissions.

It seems that Mrs. Brooks was Miss Jack McMakin when the county tax roll was prepared and since the MISS was not shown on the roll, members of the jury commission took it for granted that Jack McMakin was a man.

Surprised at finding a woman in the jury box, District Judge Ben Boyd instructed Maxwell to pay Mrs. Brooks for a day’s service after he heard the circumstances of the appearance.

Mrs. Brooks left the courthouse with assurances she would not again be called to serve on a jury in Denton.

To get into the Denton County Courthouse a person must now have pull.

Before, one could push his way in, but not anymore.

The doors on the courthouse were put in “backwards” according to a spokesman for the Denton Fire Department who passed the information on to the commissioner’s court last year.

Before this week’s change, the doors had to be opened from inside by pulling and from the outside by pushing.

The theory behind the change is that in case of a fire or some other event causing rapid evacuation of the courthouse, the doors, having to be pulled inward, might cause trouble should a panic occur.

But with work completed this week, the doors which have operated the same for a number of years are now find people who are having just as hard a time changing.

Wednesday, several frequent courthouse visitors would scale the stairs only to push on the doors which must now be opened by a pull.

Service roads to switch from two-way on May 3

The conversion of Interstate 35E service roads from two-way to one-way is only a matter of days away from becoming reality.

City officials say that on Monday, May 3, all service roads along I-35E — with the exception of one short stretch — will be converted to one-way from the Denton State School Road south to University Drive north.

The service road between Prairie and the Airport Road on the western side of I-35E will remain two-way because city officials say the road was designed for two-way traffic and also due to the location of Interstate 35W.

The ordinance calling for the one-way operations was slated to become effective Saturday, May 1, but the date has been changed to the following Monday due to placement of new signs on the roads.

“The Texas Highway Department plans to install all signs which will make ordinance officially effective on the north and southbound service roads,” said Stanford (Bud) Hauptmann, director of community development. “They plan to start installing the signs early Monday, May 3, and complete the project on the same date.”

Hauptmann stressed that the ordinance will become effective immediately after the signs are posted and enforcement will begin at the same time.

“Those service roads will return to two-way operation of construction out there,” Hauptmann said.

Since the construction of I-35E was completed, the service roads have operated as two-way traffic routes, although they were designed for one-way operation, according to Bill Moore, Denton’s traffic control superintendent.

“Part of the original agreement between city and the Texas Highway Department stipulated that when the highway construction was complete, the city would pass an ordinance designating the frontage roads as one-way,” he said.

The University of North Texas women’s tennis team improved its Southland Conference record to 6-1 Sunday with an easy victory over Stephen F. Austin at the UNT courts.

The Lady Eagles (8-4 overall) won the top three singles matches, the top two doubles contests and seven of nine in all.

Melissa Spann, Jennifer Goodwin, Kristi Benson, Miriam Jiminez and Mandi Kingston all won singles matches for UNT, which only dropped the No. 4 match. Spann and Goodwin were victorious at No. 1 doubles and Benson and Jiminez won at No. 2 doubles.

Benson, the team’s only senior, is a perfect 7-0 in both singles and doubles matches during the conference season, which continues for the Lady Eagles at home this weekend.

In San Antonio, the UNT men’s tennis team was defeated by Texas-San Antonio.

Chris Henderson scored a 6-3, 6-2 victory at No. 2 singles, the Eagles’ on point in singles play. They also won one doubles match.

LESLIE COUTURE can be reached at 940-349-8762 or leslie.couture@cityofdenton.com.