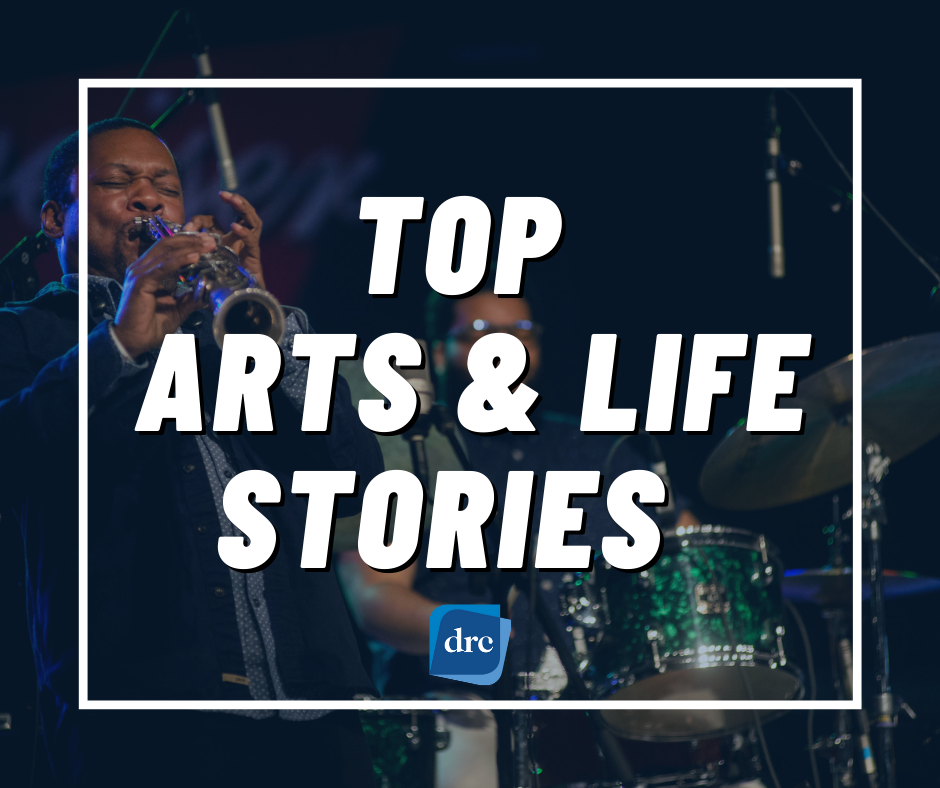 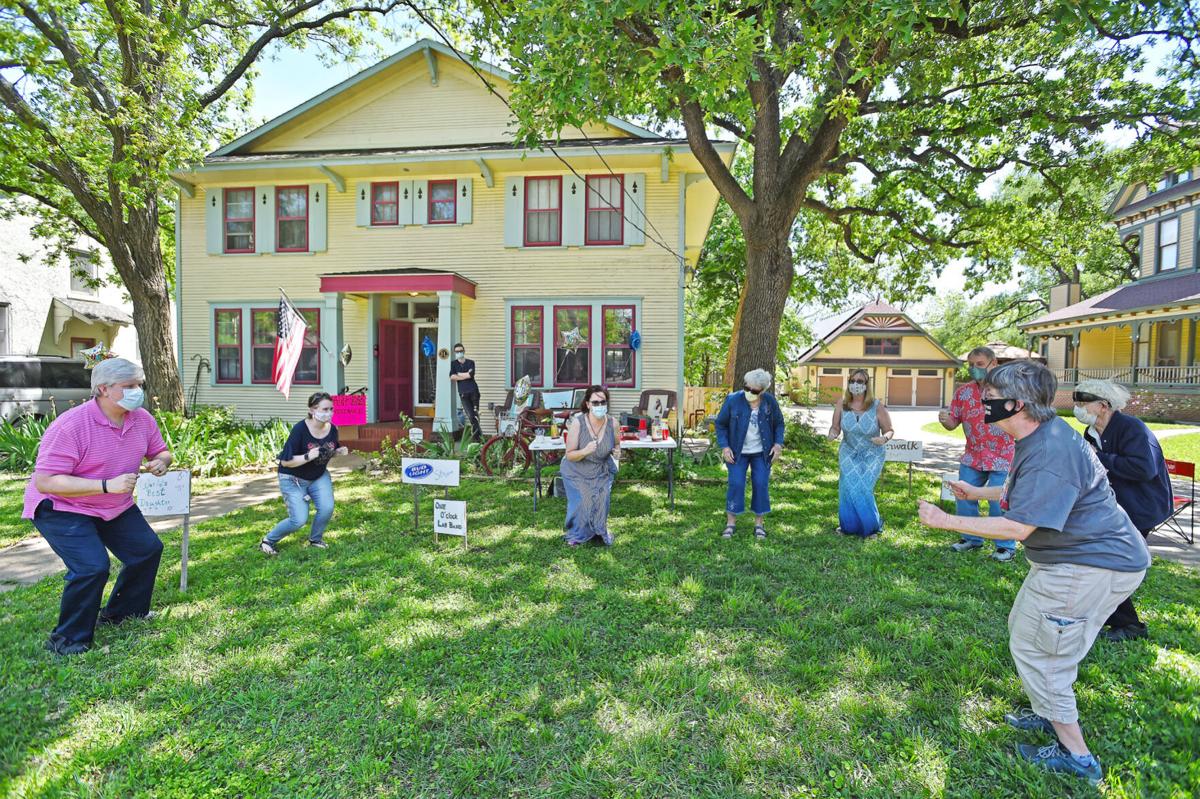 Jim Meyer, left, and Jennifer Meyer, center, do the Chicken Dance with family and friends, who created a simulated Denton Arts & Jazz Festival for them in their front yard April 26. The Meyers, who have been married for more than 20 years, typically celebrate their shared birthday at the jazz fest, which was canceled by the pandemic. 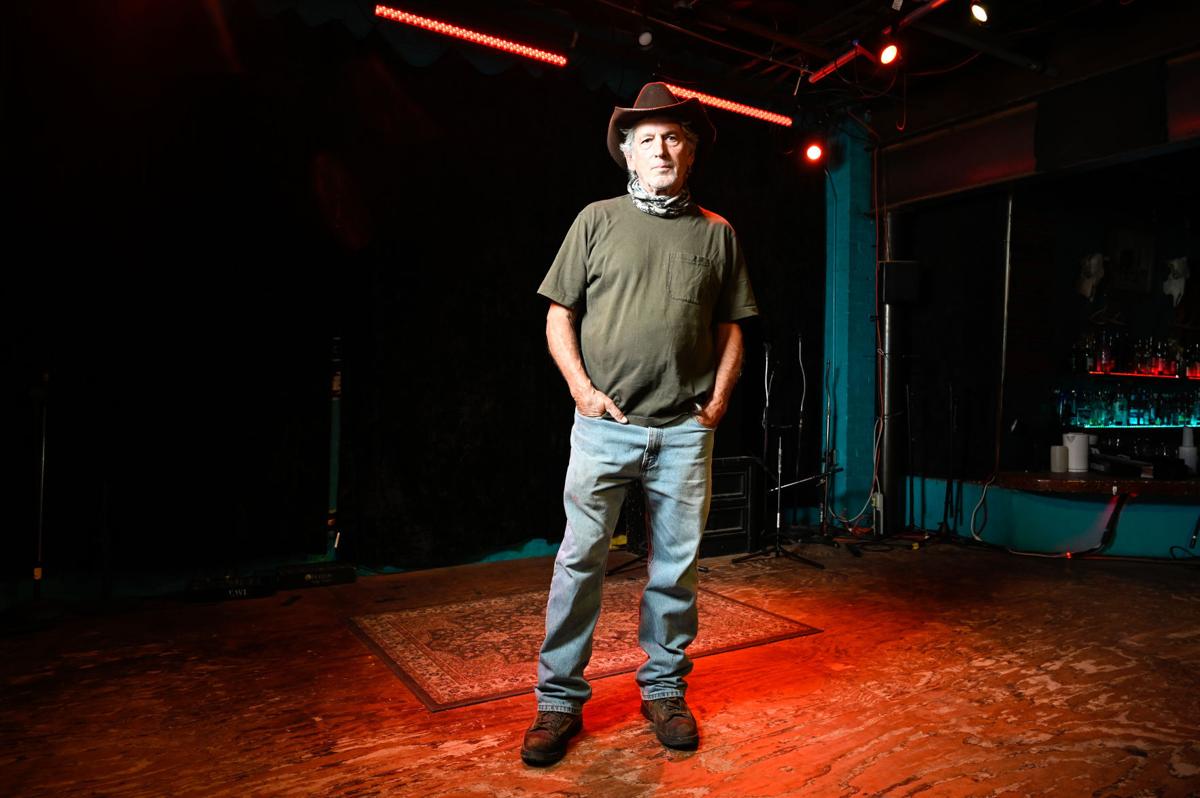 Dan Mojica, co-owner of Dan’s Silverleaf, said in September that the storied local venue could survive the rest of 2020, but could use relief money from the Save Our Stages Act to support employees and operations through next June. 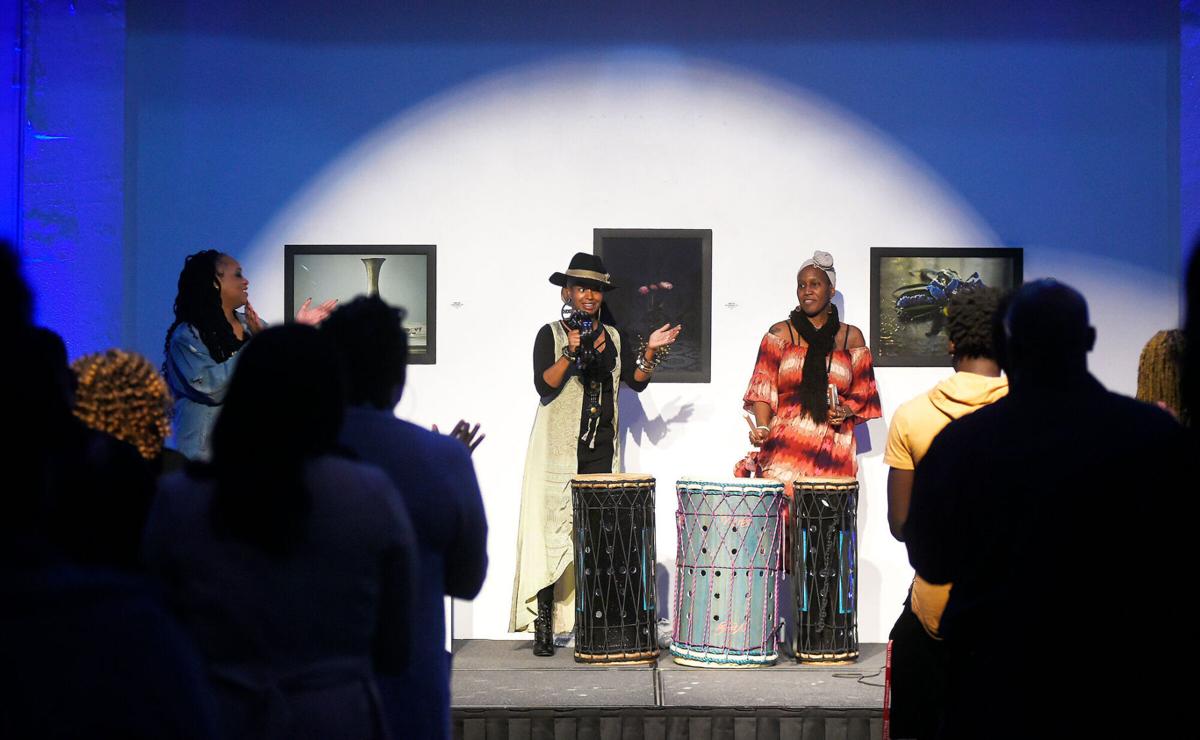 Denton Black Film Festival Poetry Slam host Verb Kulture, center, is joined onstage by volunteers from the audience Jan. 25 at the Patterson-Appleton Arts Center. The festival is planning for a virtual experience in 2021. 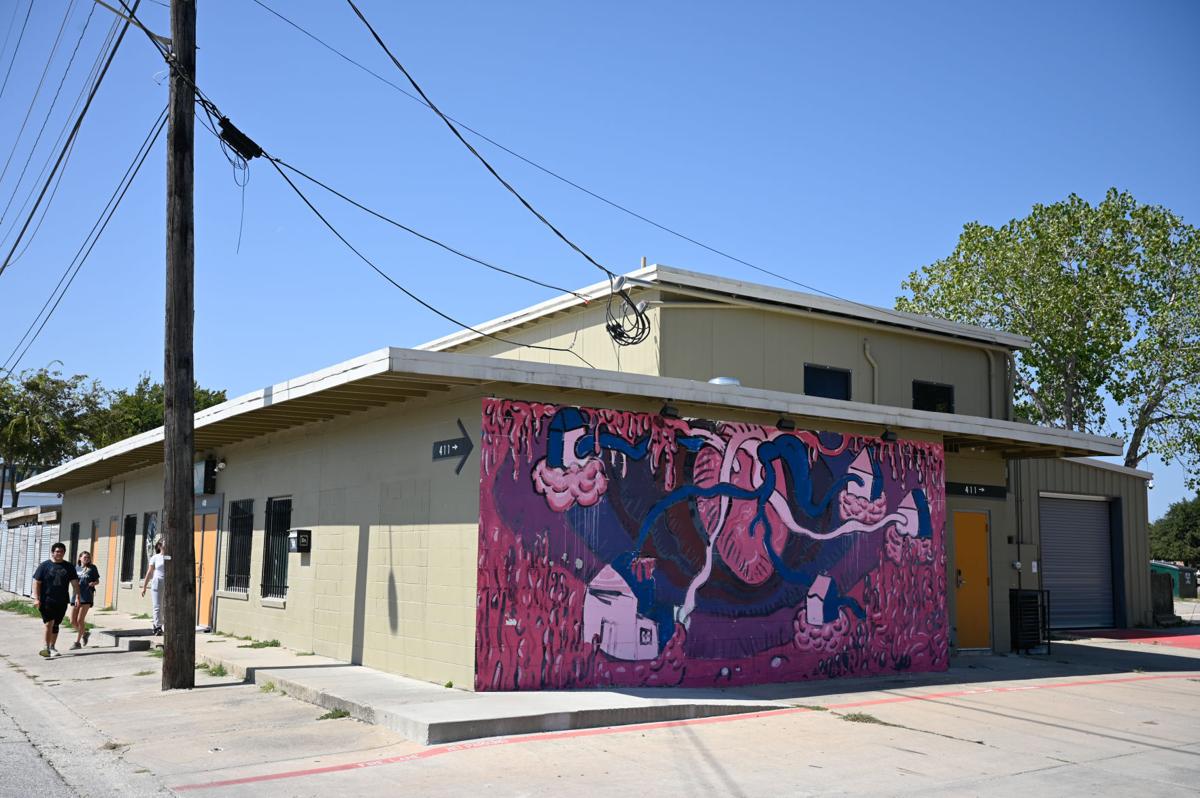 The exterior of Rubber Gloves Rehearsal Studio is shown in October. Denton County opted in to allow bars to reopen to 50% capacity this fall, although they had to close in early December as the percentage of COVID-19 patients in area hospitals topped 15%. 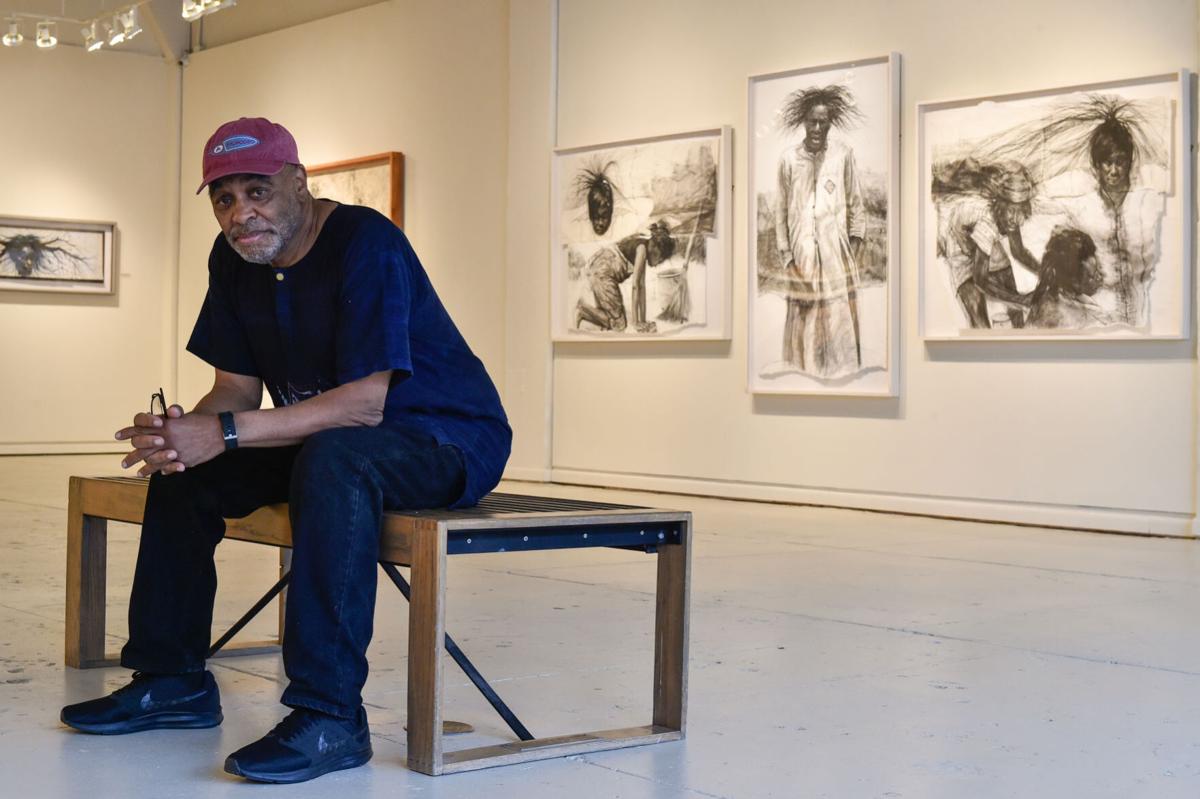 South Carolina artist Tyrone Geter stands next to one of his pieces from his solo exhibit “I Come as One, But Stand as 10,000” in the Meadows Gallery at the Patterson-Appleton Arts Center in 2018. The Greater Denton Arts Council closed the center's doors for months in response to the pandemic. 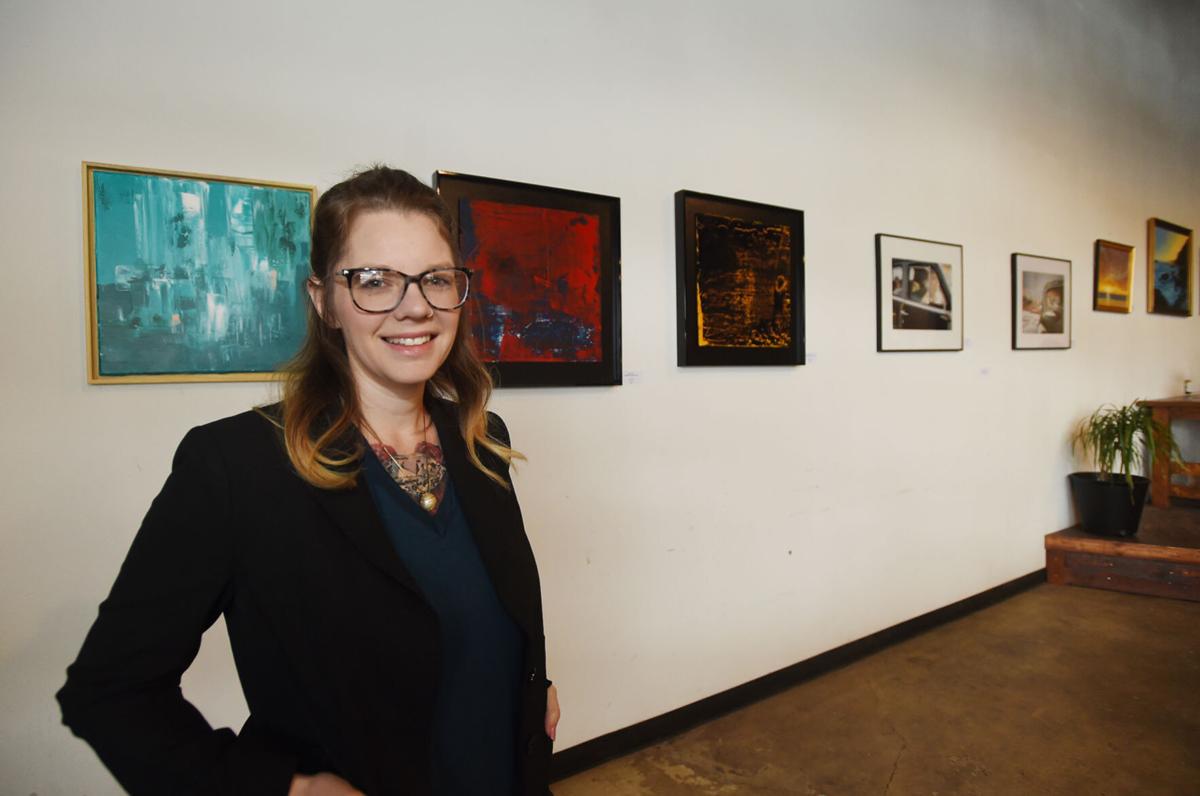 Denton Black Film Festival Poetry Slam host Verb Kulture, center, is joined onstage by volunteers from the audience Jan. 25 at the Patterson-Appleton Arts Center. The festival is planning for a virtual experience in 2021.

While businesses large and small got most of the attention regarding pandemic fallout, Denton’s arts scene suffered immediately as emergency orders banned large gatherings.

Here’s our look back at the biggest stories about the arts and entertainment industry in 2020.

It started with South By Southwest canceling the massive Austin music and film festival, and it didn’t take long for spring festivals around the state to close up shop early.

Denton has two major festivals in March, the Texas Storytelling Festival and Thin Line. The Tejas Storytelling Association hosted the opening day of its 2020 storytelling festival, but the second day, officials announced it would have to end the fest to comply with Denton County’s emergency declaration.

Thin Line, a documentary film, music and photography festival, canceled all concerts and in-person screenings, but was able to host film screenings and some Q&A sessions online. The model worked so well that officials announced the 2021 festival will be online, as well.

A brand-new music festival, BUTTS Fest — Better Understanding Through Trash Service — had to fold up to comply with the emergency declaration. Denton musician Michael Tong Kokkinakis launched what was to be a 45-act festival the second week of March. The festival was a hat-tip to Earth Day, and a way to spread the word about Kokkinakis’ weekly volunteer litter cleanup — especially focusing on cigarette butts — around the downtown Square. The festival was also meant to bring awareness to the large-scale recycling of cigarette butts (the No. 1 litter item in the city and the state) into a material used to make park benches and play structures.

There’s no word yet on whether BUTTS Fest will come back in 2021, but the group is still active and evangelizing about litter, its impact and how to clean Denton up some.

The Denton Arts & Jazz Festival canceled this year’s event, setting off a chain reaction of disappointment from locals who never miss the free three-day music and art festival. The jazz festival is one of the largest events in Denton every year — second only to the North Texas Fair and Rodeo. Arts & Jazz packs multiple stages with everything from choral, gospel, country, blues and jazz, with headlining concerts saved for some of the best-known solo acts (past headliners have included Chick Corea, Arturo Sandoval and Buddy Guy) and bands (the Neville Brothers, Los Lobos, McCoy Tyner Trio).

The North Texas Fair and Rodeo was perhaps the largest event to survive the pandemic. The event moved from August to October and made the most of its outdoor setting. The fair added a screen so more people could see rodeo events and concerts while socially distancing.

The Denton Holiday Lighting Festival shifted to a drive-up photo event and toy drive, with no performances, booths or music on the Square.

For Theatre Denton — the newly merged group formed by Denton Community Theatre and Music Theatre of Denton — the pandemic put a damper on the unveiling of the new name and brand, but it also effectively closed its venue, the Campus Theatre. The season was postponed, and like so many other organizations, the company streamed productions online — The Gin Game as well as its Christmas family production, “Fireside Footlights,” which is online at www.footlightdenton.com through Dec. 31. The company has made use of the months of an empty house, however, and has embarked on some remodeling work and updates to the historic theater.

For Denton’s music scene, COVID-19 was a punch in the gut. Bars had to close, and the city’s storied music venues like Dan’s Silverleaf and Rubber Gloves Rehearsal Studios closed their doors for the first portion of the shutdown. Rubber Gloves reopened gradually, and Dan’s Silverleaf launched streaming, ticketed concerts. Andy’s Bar has stayed mostly quiet, and LSA Burger Co. canceled most music on the rooftop bar.

Local music venues campaigned for the Save Our Stages Act, a relief bill that would distribute $10 billion through Small Business Administration grants for live venue operators, promoters, producers and talent representatives. Grants would be equal to the lesser of either 45% of gross revenue from 2019, or $12 million, and could be used for rent, mortgages, utilities, personal protective equipment, payments to contractors, maintenance, administrative costs, taxes, operating leases and capital expenditures related to meeting state, local or federal social-distancing guidelines. The legislation has passed as part of the $900 billion stimulus bill.

Two Denton dance companies, the Festival Ballet of North Central Texas and Denton City Contemporary Ballet, decided their annual shows would go on. The Festival Ballet moved its annual staging of The Nutcracker to the Gaylord Texan in Grapevine, slashed its cast in half and had dancers rehearse and perform wearing masks. The Contemporary Ballet recorded its annual production of A Gift for Emma and streamed two performances for ticket buyers.

The shutdown meant that the downtown Patterson-Appleton Arts Center closed its doors to the public. The city’s largest visual arts organization, the Visual Arts Society of Texas, had to pivot and postpone its annual shows.

The Greater Denton Arts Council — which operates the arts center and coordinates all exhibitions and most programming that keeps the downtown center busy and booked for much of the year — created online exhibits on its website and made ample use of social media to keep local and regional art in the public imagination.

In the fall, the arts center reopened, although it’s currently closed for the holidays through Monday, Jan. 4. The council will open “Hopeful Wanderers: Works by Angelia Ford,” in Festival Hall for in-person viewing that day.

The arts council has planned Elementary Art After School, a four-week program that will bring small classes to the center, 3:30-5:30 p.m. on Tuesdays, Jan. 5-26, focusing on fibers and weaving with the theme “It’s Cold Outside.” The Feb. 2-23 program will have students working with clay. The program is for ages 6 to 10, and tuition costs $80 and includes supplies.

A new visual arts enterprise, Envision Arts, had been staging art shows in local businesses, mostly at Armadillo Ale Works. Artist Ginger Cochran pioneered the company, and during the pandemic, she discovered that the affiliated magazine, Envision ARTS, built a growing readership.