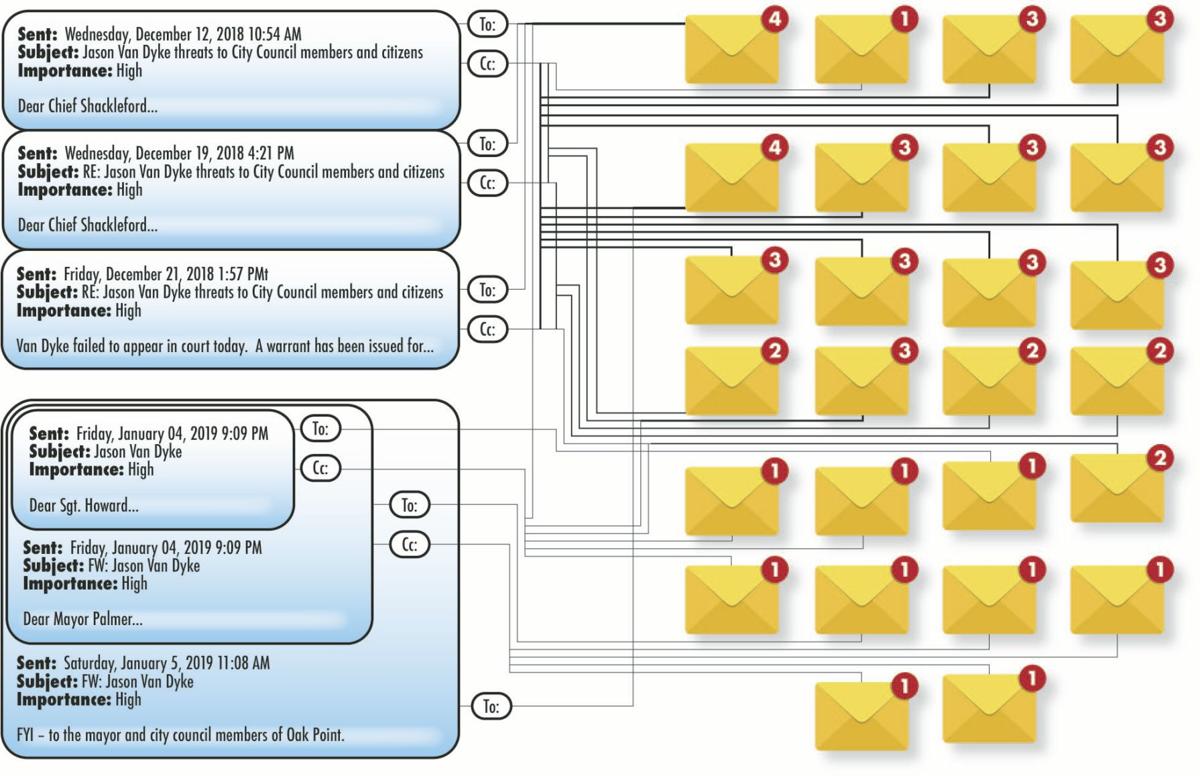 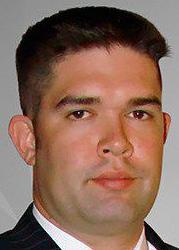 This story has been corrected to reflect that James McGibney is an entrepreneur, not an attorney. As well, Tom Retzlaff of Arizona was dismissed from a 2014 lawsuit involving McGibney before a judgment for $1.3 million was handed down. Details of the lawsuit were unclear in an earlier version of this story.

The emails come one after another, almost always carrying a sense of urgency. They come with attached court documents and sometimes social media screenshots. Sometimes there are threats. Other times they contain demands that something be done — fast.

The legal drama of Jason Van Dyke that has played out in Denton in recent months carries a much deeper history than what has appeared in court so far this winter.

Not much has been reported about the man who has been the driving factor behind exposing Van Dyke’s alleged internet history of derogatory remarks toward people or his role with student organizations at the University of North Texas and with the Proud Boys, which is considered by many to be a white supremacist organization or hate group.

But Tom Retzlaff knows a lot about a lot of people. Retzlaff, the Arizona man who says Van Dyke threatened to kill him, has taken a keen interest in seeing to Van Dyke’s collapse. People interviewed for this story say Retzlaff has done to others what he now is doing to Van Dyke.

Out of the public eye, Retzlaff has been working to advance the stakes against Van Dyke, from filing complaints with the State Bar of Texas to directly communicating with law enforcement agencies and community members about how he says Van Dyke is dangerous.

“I’m not going to sugarcoat it — this man in the course of the past year has completely dismantled my life,” Van Dyke said Thursday. “All I want is this man to leave me alone.”

In early December, Denton City Council member Deb Armintor got a Facebook message from a person named Molly Santucci. The person claimed to be Retzlaff’s wife and shared with Armintor some documents showing Van Dyke had been named in paperwork connecting him to two UNT student groups.

In recent weeks, the Denton Record-Chronicle has received multiple tips that the Santucci account is actually a proxy for Retzlaff. When asked directly if Retzlaff was the person behind the Santucci account, Retzlaff did not answer, instead saying, “I do not want people to know that I got remarried not too long ago.” He shortly thereafter shifted the discussion back to Van Dyke.

Retzlaff has sent dozens of emails to various Denton County authorities at times demanding that Van Dyke be arrested. Over time, his tone became impatient as he explained how his life was in danger. Retzlaff also has been highly critical of law enforcement.

“By the way,” he wrote to the Denton County District Attorney’s Office, “I find it extremely suspicious that Brian Howard of the Oak Point PD refuses to go arrest this guy.”

“When the s--t hits the fan — and you know it eventually will because, well, that’s just how life is, but when s--t hits the fan, please do not be upset or surprised when it is YOUR photograph that is on the front page of the Sunday paper all across the world and everyone is pointing fingers wanting to know why the f--k something was not done.”

“I hope that someone in your office can please step in tonight and get this immediately corrected,” he wrote.

Why does he care about Van Dyke?

Retzlaff says his sole reason for going after Van Dyke is because he does not believe Van Dyke should serve the public. He said Van Dyke’s affiliation with the Proud Boys and his threats of violence and derogatory remarks online make him unfit to represent citizens in courts of law.

But Van Dyke and others interviewed say they believe Retzlaff is angry after some revenge pornography websites were shut down.

In 2014, Van Dyke took aim at such a site, called Pink Meth, when he represented a UNT student who said her nude photographs were posted there. Van Dyke sued the website. The suit did not result in Pink Meth being shut down, but the site later was shuttered in a major federal investigation.

“The reason I believe this is because Mr. Retzlaff has a pattern of conduct going after people … who were instrumental in getting some of these shut down,” Van Dyke said.

Retzlaff himself was accused in an affidavit from his daughter of allegedly posting his daughter’s nude photographs on the internet. The affidavit quotes his daughter as saying, “I am the victim of revenge pornography at the hands of my father, Thomas Retzlaff.” Retzlaff has said on multiple occasions that the evidence is made up.

Van Dyke said he did not hear from Retzlaff directly until December 2017, when Retzlaff filed a grievance against Van Dyke with the State Bar of Texas. In the grievance, Retzlaff took credit for Van Dyke losing a job offer.

Van Dyke says Retzlaff has independently reached out to Van Dyke’s clients and previous employers to wreck his career. Retzlaff said none of this is true and that he’s the true victim since Van Dyke has made documented death threats against him.

“I’ve never made any kind of threats to murder anybody or cause anybody harm,” Retzlaff said.

In March 2018, Van Dyke filed what amounts to a $100 million defamation lawsuit against Retzlaff in which Van Dyke claims Retzlaff caused him to lose multiple jobs by telling his bosses he is a Nazi and a white supremacist.

In this case, Retzlaff and his attorney deployed a strategy Retzlaff has used in other lawsuits with which he has been involved. Shortly after Van Dyke sued Retzlaff, Retzlaff responded with an anti-SLAPP (strategic lawsuit against public participation) motion.

Anti-SLAPP motions are aimed at protecting the little guy in litigation against large corporations and entities. But some interviewed for this story say Retzlaff has exploited this to earn himself money from court judgments. And Van Dyke has challenged the constitutionality of Retzlaff’s use of Texas’ anti-SLAPP law.

“It was crafted so poorly that it has been used by the Tom Retzlaffs of the world to abuse people, and I think the law needs to be changed,” Van Dyke said.

“I’ve offered multiple times to dismiss this lawsuit. The only thing I’ve ever wanted is him to leave me alone,” Van Dyke said. “And his responses to that are, ‘go f--k yourself, long and hard.’”

Retzlaff served six years in state prison from 1998 to 2004 for carrying a prohibited weapon onto an elementary school campus in Temple. By 2008, he had been named a vexatious litigant by the state of Texas because of a history of filing frivolous litigation in courts. By being named a vexatious litigant, the state essentially said he had filed too many lawsuits without merit.

California entrepreneur James McGibney has been in a legal battle with Retzlaff since the end of 2013. He said Retzlaff’s pattern of behavior toward Van Dyke is nearly identical to the harassment he has endured for six years. The two have different versions of the story, both centering on their involvement with revenge pornography websites, where lewd images of people are posted by third parties who obtained the images, such as ex-boyfriends.

“He threatened to burn my children and hang them from a tree,” McGibney said. “He’s very specific and makes direct threats. … Once you land on his radar, you’re not coming off.”

McGibney said he has been regularly harassed by Retzlaff. He said he’s fielded death threats from Retzlaff and that Retzlaff has edited McGibney’s Wikipedia page.

Once provoked, McGibney filed a lawsuit — similar to what Van Dyke filed last year against Retzlaff after both accused Retzlaff of harassing them. After Retzlaff filed an anti-SLAPP motion, about $1.3 million was awarded to the plaintiff, though Retzlaff had been dismissed from the suit before the judgment was handed down. McGibney appealed the decision.

“I’m not a fan of either of these people, but what he did to Van Dyke is identical to what he did to me,” McGibney said. “Van Dyke should have learned from my mistake. My mistake was suing Thomas Retzlaff and trying to get a restraining order against him.”

Van Dyke’s lawsuit against Retzlaff is still working its way through the court system. And Van Dyke is due in a Denton County court to face a trial on his charge of making a false police report in September.