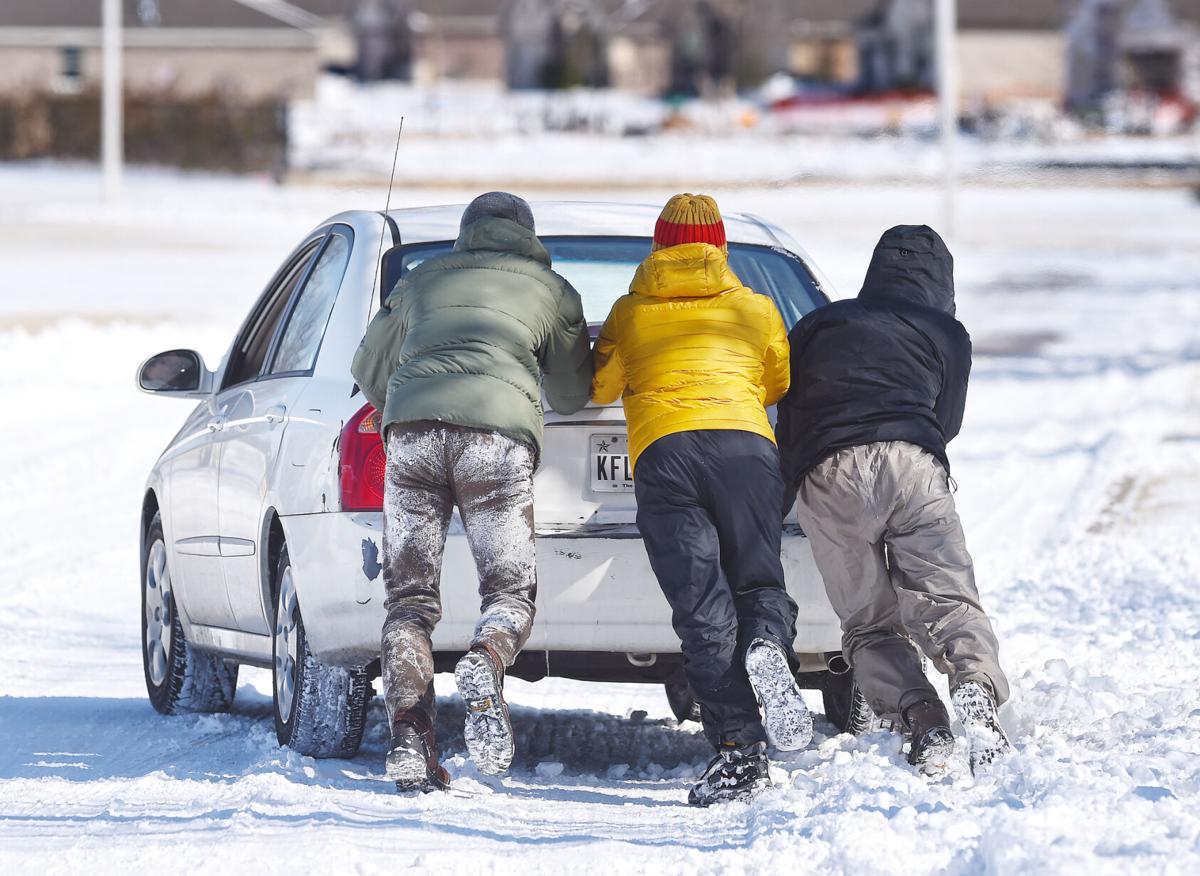 In 9-degree weather, good Samaritans help a driver whose vehicle was stuck in a snow bank on Windsor Drive on a sunny, extremely cold Monday, Feb. 15, 2021. 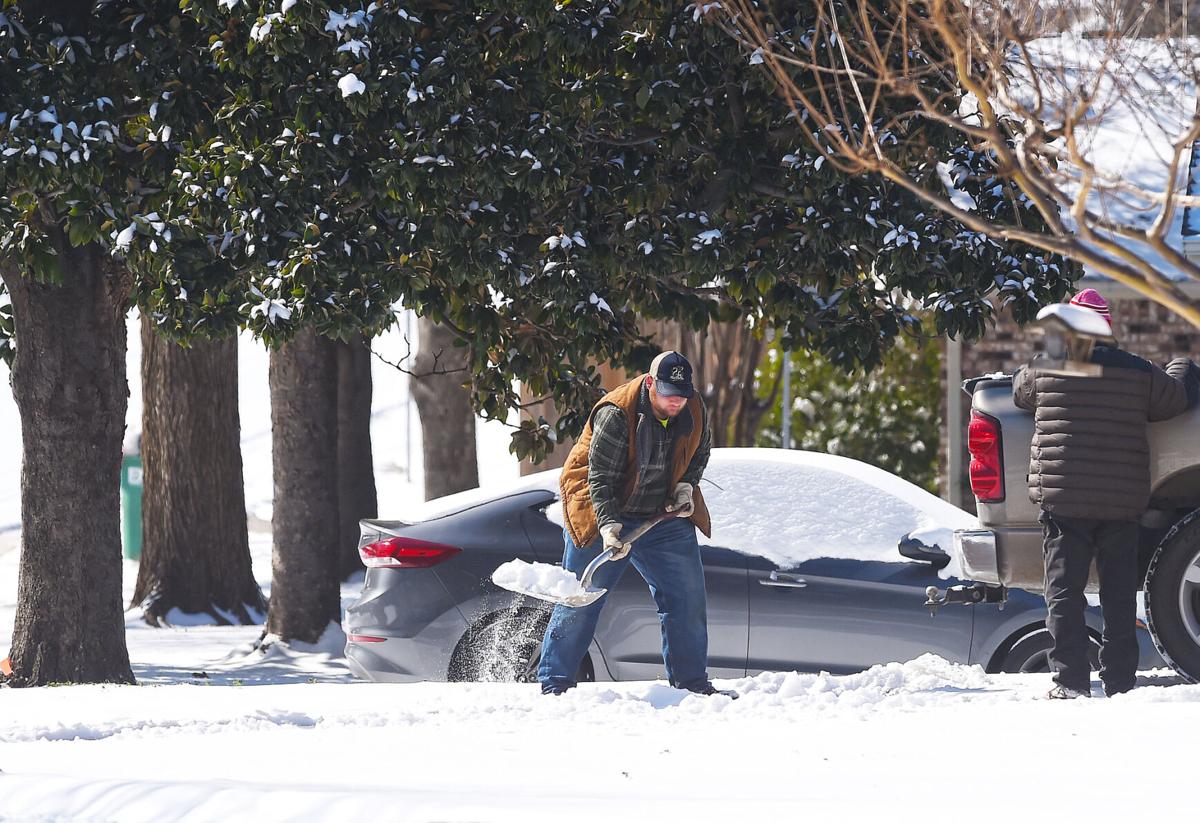 Denton residents shovel snow from their driveways Monday, Feb. 15, as a thermometer showed the cold was hovering around 10 degrees.

In 9-degree weather, good Samaritans help a driver whose vehicle was stuck in a snow bank on Windsor Drive on a sunny, extremely cold Monday, Feb. 15, 2021.

Denton residents shovel snow from their driveways Monday, Feb. 15, as a thermometer showed the cold was hovering around 10 degrees.

This story was updated Monday night.

With a wind chill warning in effect and more winter precipitation on the horizon, there isn't a clear end in sight for the forced rolling power outages happening across Texas and in Denton County.

Residents across the city and county remained confused on how and when power would be shut off in certain areas. Right now, it's up to ERCOT's discretion and is based on circuits, said Ryan Adams, spokesperson for the city of Denton.

“There are numerous individual circuits or feeders throughout the city and they will be turned on and off in a rotating fashion," he said. "Yours may be off, and your neighbors could be across the street or down the road on completely separate circuits, and they may still be on.”

In an email from Denton Municipal Electric to City Council members on Monday afternoon, Tony Puente, executive manager of utilities and DME general manager, explained that city officials have no control over the scheduling of rolling power outages.

“At this time, ERCOT continues to change the amount of power we need to reduce or are allowed to turn back on," Puente said in the email. "Because of this constant fluctuation, we have to rework the order of circuits experiencing outages to meet that requirement.”

“DME has received a high number of requests from ERCOT, with the latest allowing an increase to the load,” according to the email. “Additionally, ERCOT does not provide forewarning on any requests. They happen in real time and we have to adjust immediately.”

Adams told the Denton Record-Chronicle that DME could not provide data on how many households have been spared the rolling outages and those that have been impacted since Monday morning.

Asked to speak directly to a DME representative, Adams declined. An ERCOT spokesperson could not be reached Monday afternoon.

With more bad weather on the way, outages are expected to continue.

As of Monday evening, the NWS had put Denton under a wind chill warning and hard freeze warning until noon on Tuesday, as well as a winter storm warning from 6 p.m. Tuesday until 6 a.m. Thursday.

The highest likelihood for snow will come before noon on Wednesday, when NWS predictions showed a more than 90% likelihood from roughly 1 a.m. until at least 4 p.m.

Those forecasts come with the chance of rain beginning Tuesday night and sleet in the early hours of Wednesday.

Temperatures were expected to drop to minus 1 degree Monday night, according to Monday evening predictions, and Tuesday’s high remains subfreezing, in the low 20s.

As of Monday evening, NWS predictions didn’t have the area around Denton breaking above freezing until Friday afternoon, when the region could see temperatures up to 35 degrees. Friday, Saturday, Sunday and Monday should have highs above freezing as temperatures gradually rise.

Next Monday, Feb. 22, could bring temperatures near 60 degrees, according to Feb. 15 predictions.

Leigh Anne Gullett, a University of North Texas spokesperson, confirmed Monday afternoon a “small number” of water pipes had burst in campus buildings, which led to minor water damage in some facilities.

The total extent of the damage wasn’t immediately clear, but two students at UNT’s Traditions Hall were relocated to other rooms in the building because burst pipes had damaged carpets.

Denton police and firefighters had already faced a large increase in calls over the weekend due to weather conditions.

Meanwhile, every county in Texas was under a winter storm warning during the day and the White House declared a federal emergency for the state on Sunday evening, authorizing FEMA assistance.

Adams said the city would try to resume commercial waste pickups Thursday. Tuesday’s City Council meeting was among the canceled events, as city offices were predicted to be closed until at least Thursday. Denton County Commissioners Court also canceled its Tuesday meeting.

Those who were seeking warmth and shelter at the Denton Civic Center for around-the-clock shelter were moved Monday to the Martin Luther King Jr. Recreation Center. Adams said that the MLK center has better electrical reliability and is a better facility for generators.