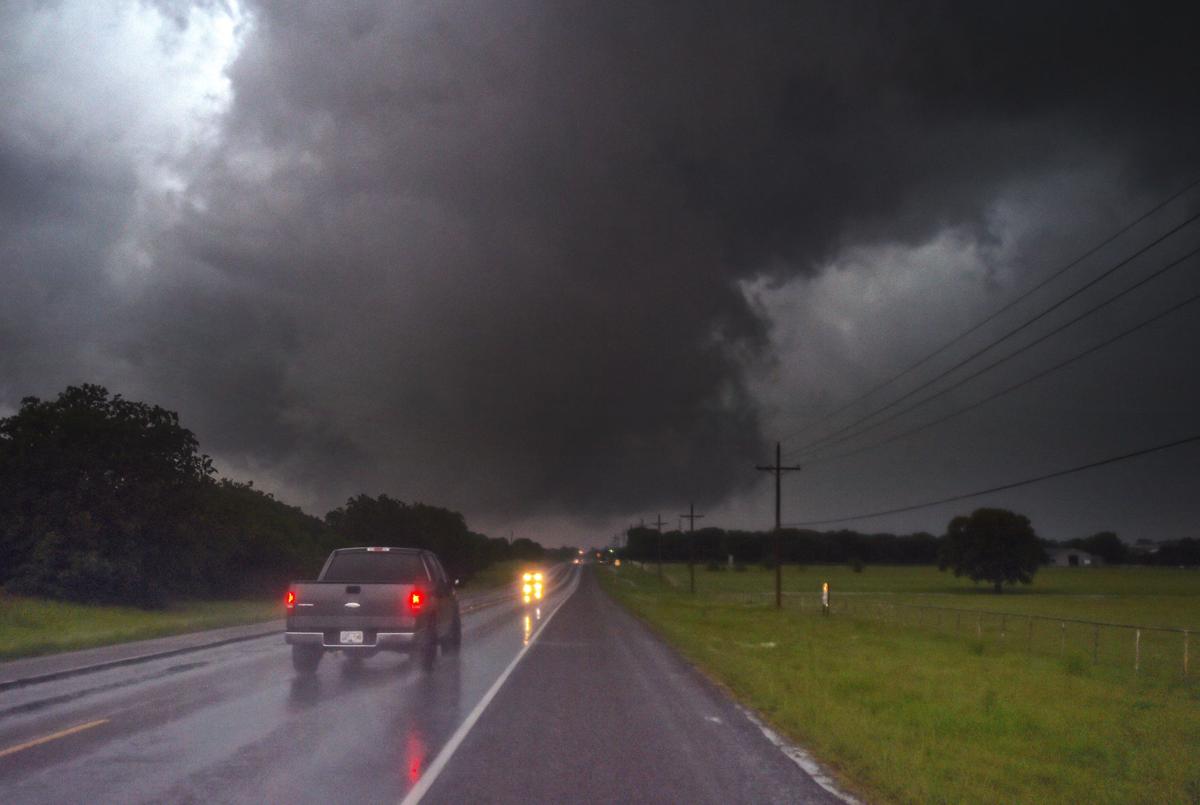 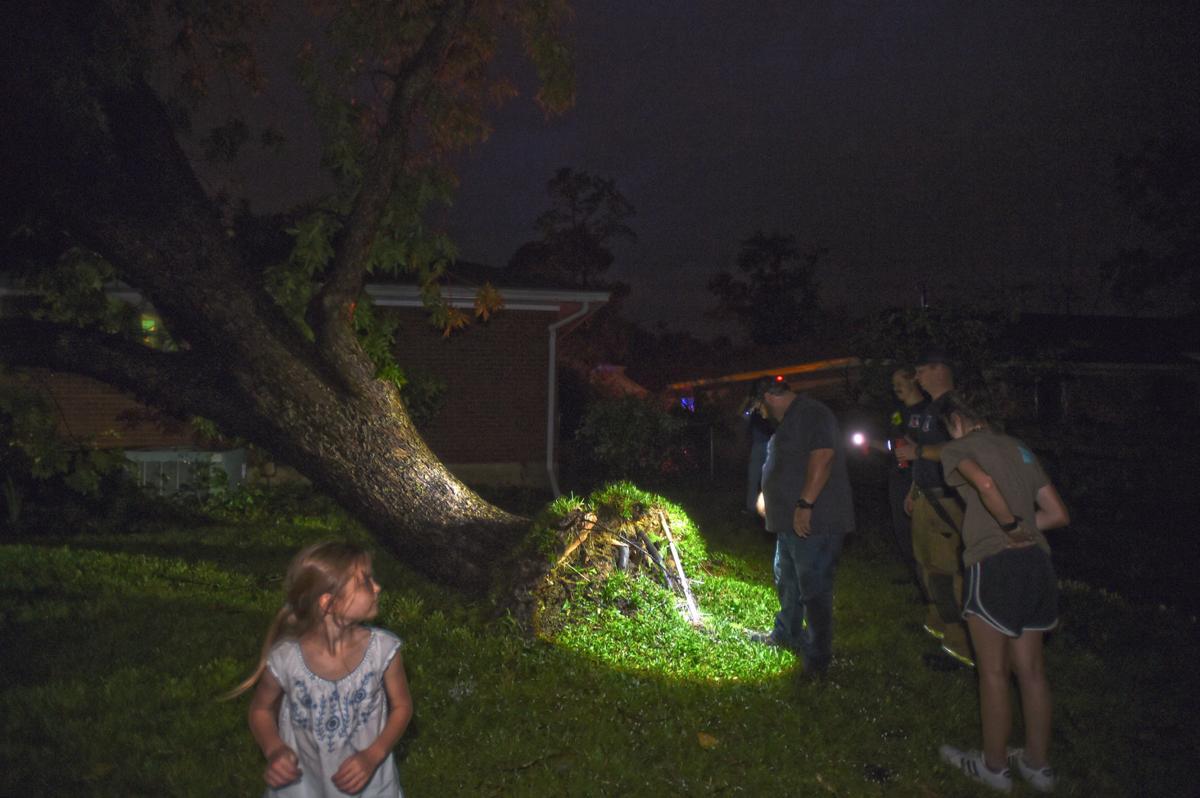 With his family and Denton firefighters, Gilbert Gilland, center, looks at the large tree that fell on his house on Edgewood Place after the severe thunderstorm Tuesday evening in Denton. 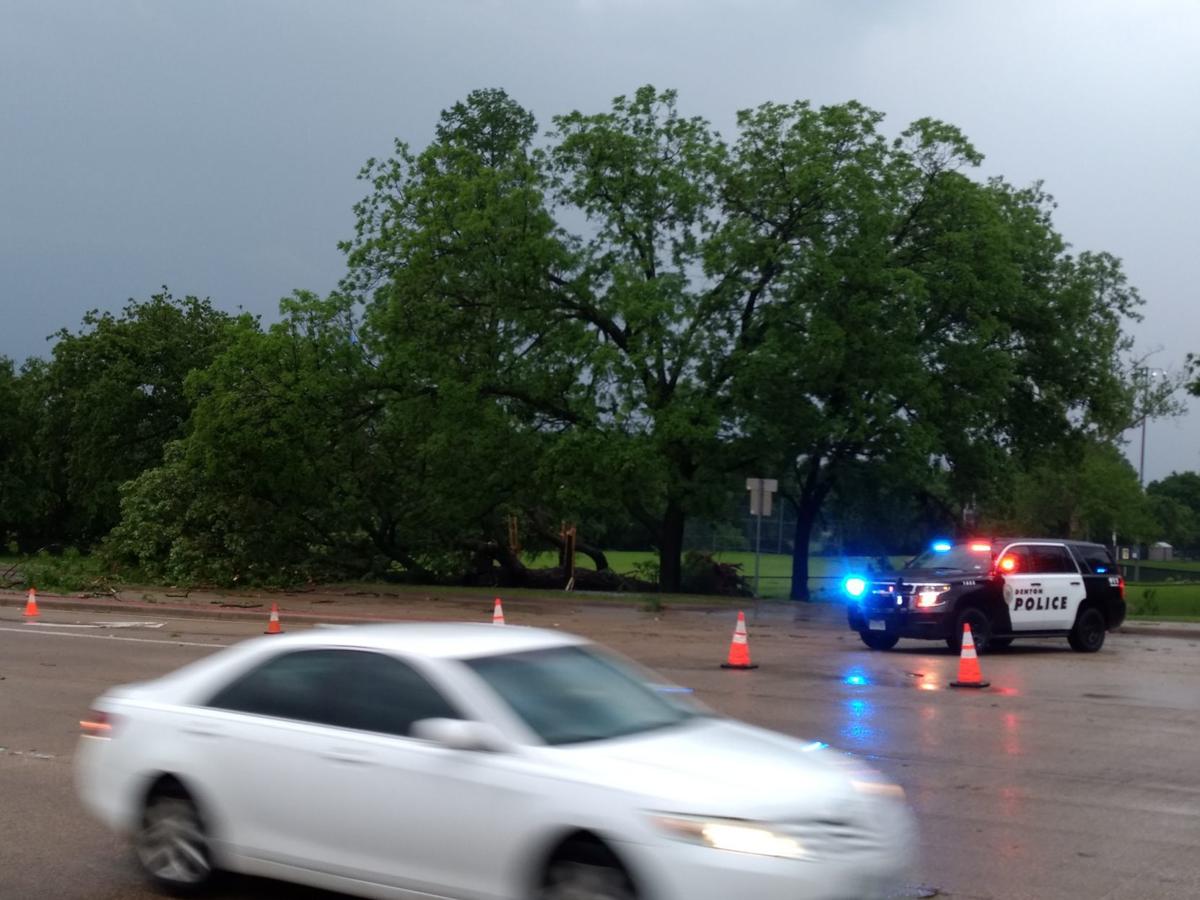 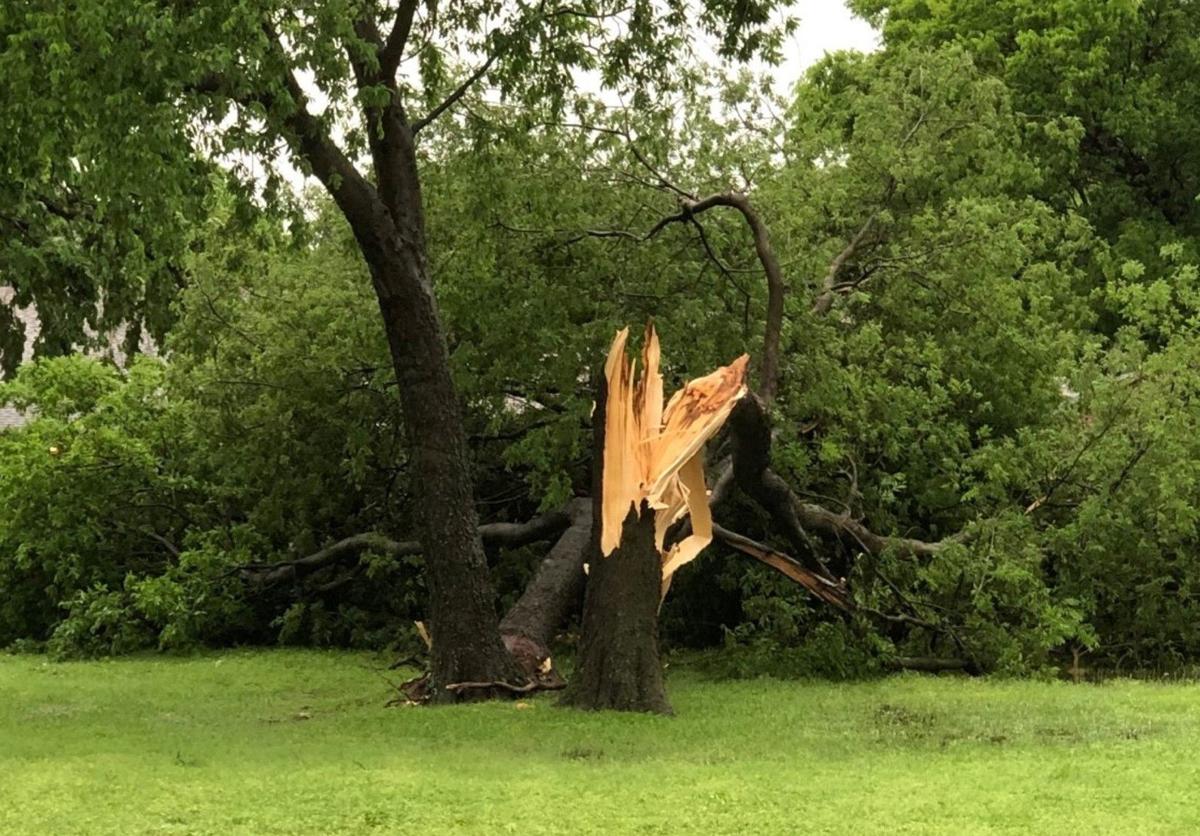 A tree near the intersection of Dallas Drive and Chambers Street was snapped off during a severe thunderstorm that came through Denton early Tuesday evening. 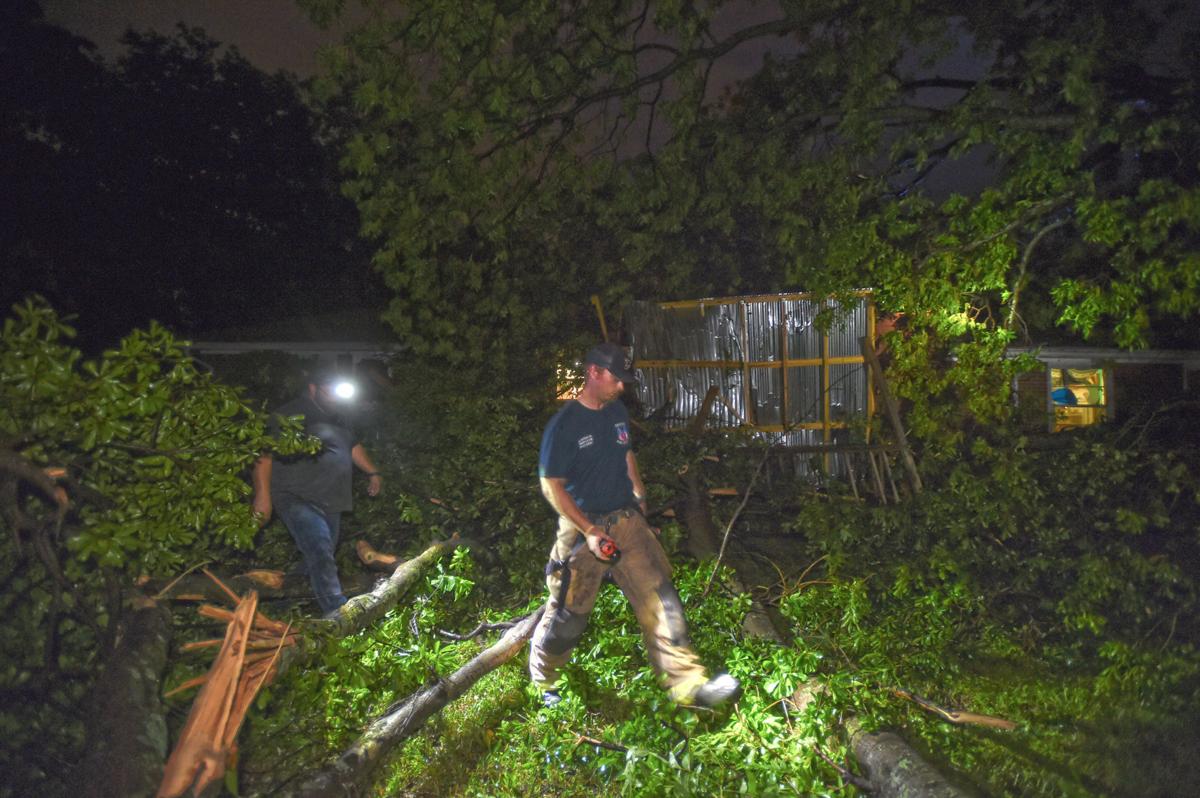 Homeowner Gilbert Gilland, left, and a Denton firefighter walk through debris Tuesday after a tornado blew down trees around and on top of his house in the 800 block of Edgewood Place. 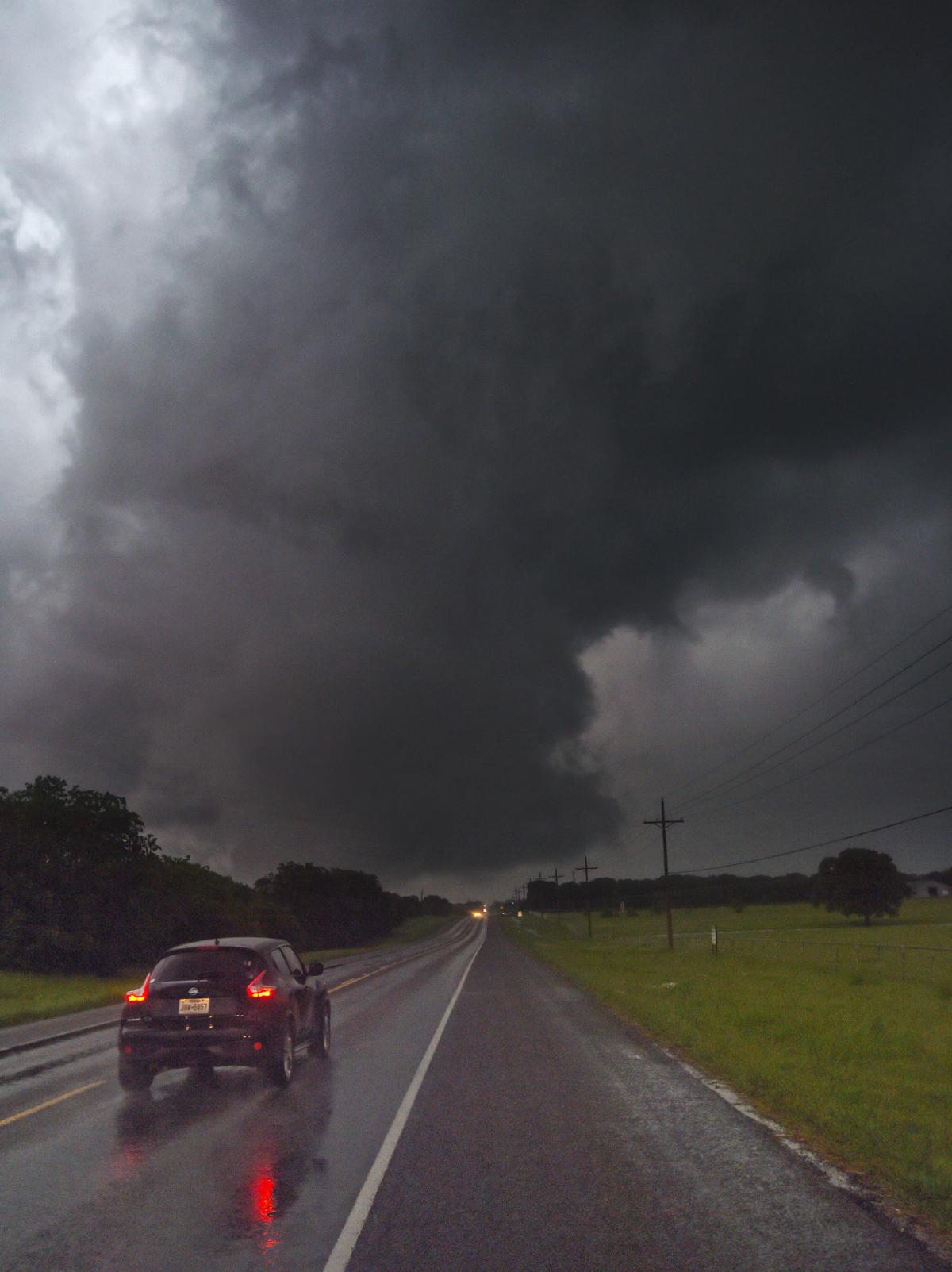 A tree near the intersection of Dallas Drive and Chambers Street was snapped off during a severe thunderstorm that came through Denton early Tuesday evening.

A meteorologist with the weather service had said earlier Tuesday that a tornado would be hard to spot.

"There's a lot of heavy rain going on, so you wouldn't be able to see [a tornado]," meteorologist Bianca Villanueva said.

Flurries of weather updates and reclassifications came from the weather service throughout Tuesday afternoon and evening as high winds and heavy rain, as well as the potential for flooding and tornadoes, moved through Tarrant into Denton County.

Denton-area residents can continue to expect 2 to 4 inches of rain through Thursday, Villanueva said, while isolated areas could see as much as 6 inches.

University of North Texas students, faculty and staff received an Eagle Alert advising them to seek shelter from the storm shortly before 6 p.m. Tuesday, according to spokeswoman Leigh Anne Gullett.

"Every building has a designated shelter," Gullett said.

"Much safer there, away from windows," Feyten wrote. "Think of it as a memorable experience! Hope it stops soon and you can go home safely."

Jody Gonzalez, Denton County emergency management director, confirmed the first damage in the county at about 6:35 p.m Tuesday. Downed tree limbs were at least partially blocking a roadway off FM407 near Justin, he said.

Damage apparently caused by the tornado and high winds kept Denton officials busy in the area popularly known as Idiot's Hill, the historic neighborhoods north of University Drive and east of Sherman Drive near TWU.

Firefighters were called out to a home in the 700 block of Roberts Street, where a large tree was reported to have fallen through a home. According to city spokeswoman Sarah Kuechler, no injuries were reported with that incident.

Nearby in the 800 block of Edgewood Place, a large tree crushed the chimney of a home.

Also in northeastern Denton, linemen with Denton Municipal Electric were responding to multiple downed electric poles and a transformer on the ground near Wilson Elementary School, along Windsor Drive and Longfellow Street.

City spokeswoman Sarah Kuechler said Tuesday night that repairs were expected to take at least five hours, and DME had called in additional staff to assist.

Two smaller outages were reported in central Denton. One just west of the University of North Texas affected about 60 homes, and another near North Lakes Park affected about 160 homes.

Oncor reported an outage in Corinth that affected more than 200 homes.

According to DCTA spokeswoman Adrienne Hamilton, bus riders can shelter on a bus or train unless it is no longer the safest option. Customers and employees can shelter in the Downtown Denton Transit Center building.

Bus service was restored about 90 minutes later, but the A-train did not get back on schedule until 9 p.m.

No injuries or fatalities were reported to the Denton Police Department by Tuesday night, police representatives said.