University of North Texas System officials offered a combined $2.5 million for four properties along the edge of campus in offers sent June 21.

The offer letters, which university officials released Friday, are the first step to the university implementing the process of eminent domain to obtain the properties, a move that was unanimously approved by the Board of Regents in February. The impacted properties are 903 Kendolph St., site of Eagle Car Wash; 902 Ave. C, home to Campus Bookstore; 906 Ave. C, home to New York Sub Hub and Naranja Cafe; and 1000 Ave. C, the site of Oriental Express.

Along with the letters, property owners received copies of independent appraisals commissioned by UNT and a notice of their rights as landowners. Each offer was at least $180,000 more than the appraised value, which is a negotiation strategy, said Josh Westrom, a Denton-based eminent domain attorney.

“That is a strategy that a condemning authority will use to make the property owner aware that if they do not accept this offer and they proceed to eminent domain, that there is a risk the property owner would only get the appraised value and not the amount being offered to them,” he said. “It’s really a strategy that says, ‘Don’t push this too far or it could get worse for you.’” 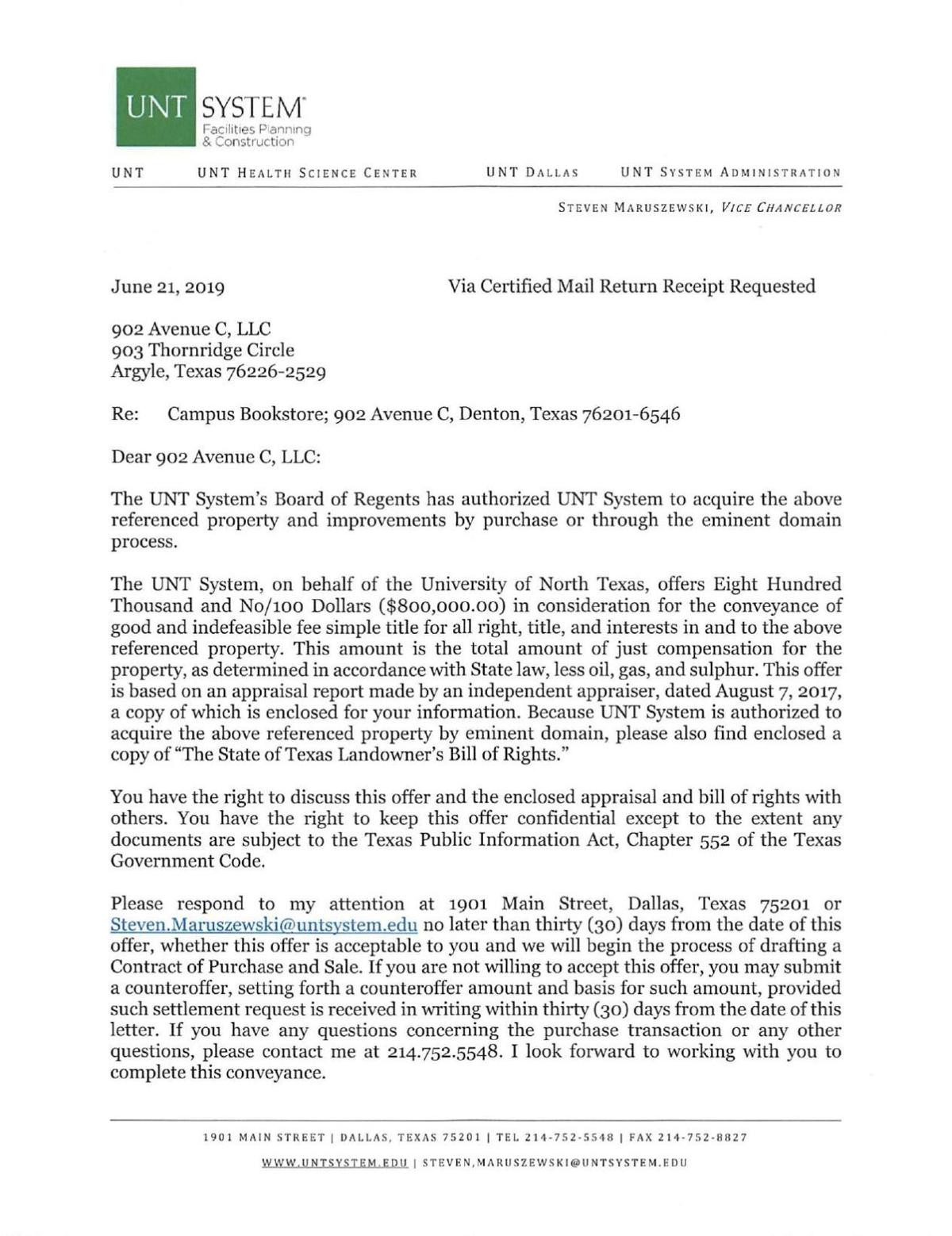 At least two property owners plan to fight the university and said they have no interest in selling.

Hunter Christiansen, owner of New York Sub Hub, said he thought the university’s offer was reflective of the property itself and didn’t consider his business. The building at 906 Ave. C was valued at $520,000 in the appraisal and UNT offered $700,000.

“We’re not going to accept their offer. That’s our first step. We’re not accepting,” he said. “We contacted a lawyer and we’re figuring out our next steps here.”

Next door, Luna Li, the property owner at Oriental Express, her family’s restaurant since 1987, plans to fight back, too, after UNT’s offer of $500,000 with an appraisal of $260,000. Her family received their certified letter from the system’s vice chancellor for facilities and planning Thursday night. They’re planning to meet with a lawyer to make a game plan, too, she said.

Now, the property owners have 30 days to respond to the offer. If they don’t, the university will send a final offer letter, and that begins a new 14-day period for the owners to respond.

If a deal isn’t reached, the matter will go to court. There are two main factors that will lead to a resolution, Westrom said. First is establishing the university has the right to use eminent domain — which it does — then the second is if the offered compensation is fair to the landowner, he said.

Unless the university makes some kind of error in the eminent domain process, the only matter the court will decide is what UNT owes the property owners. Once that dollar amount is decided, the university has to pay that or can choose to walk away from the deal, Westrom said.

“Property owners are rarely successful in challenging a governmental authority’s use of eminent domain, because it’s usually awarded to the governmental authority by statue and all they have to do is follow the procedures outlined,” he said. “They will have perfected their power, and it will be an uphill battle to defeat it.”