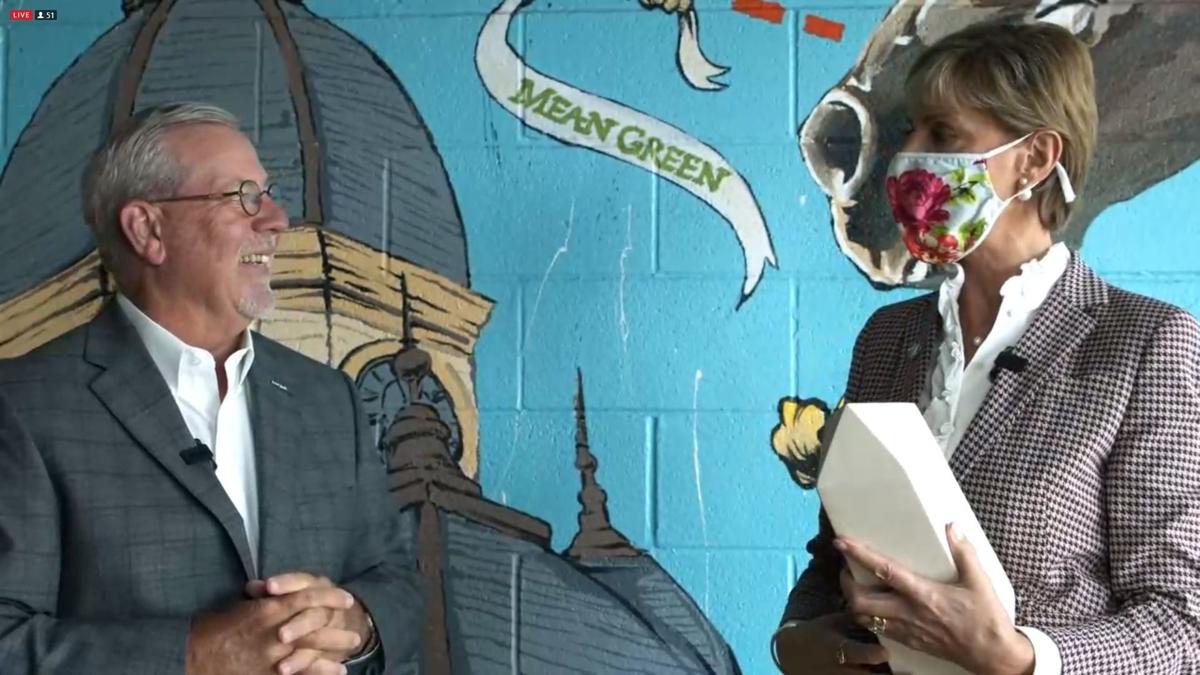 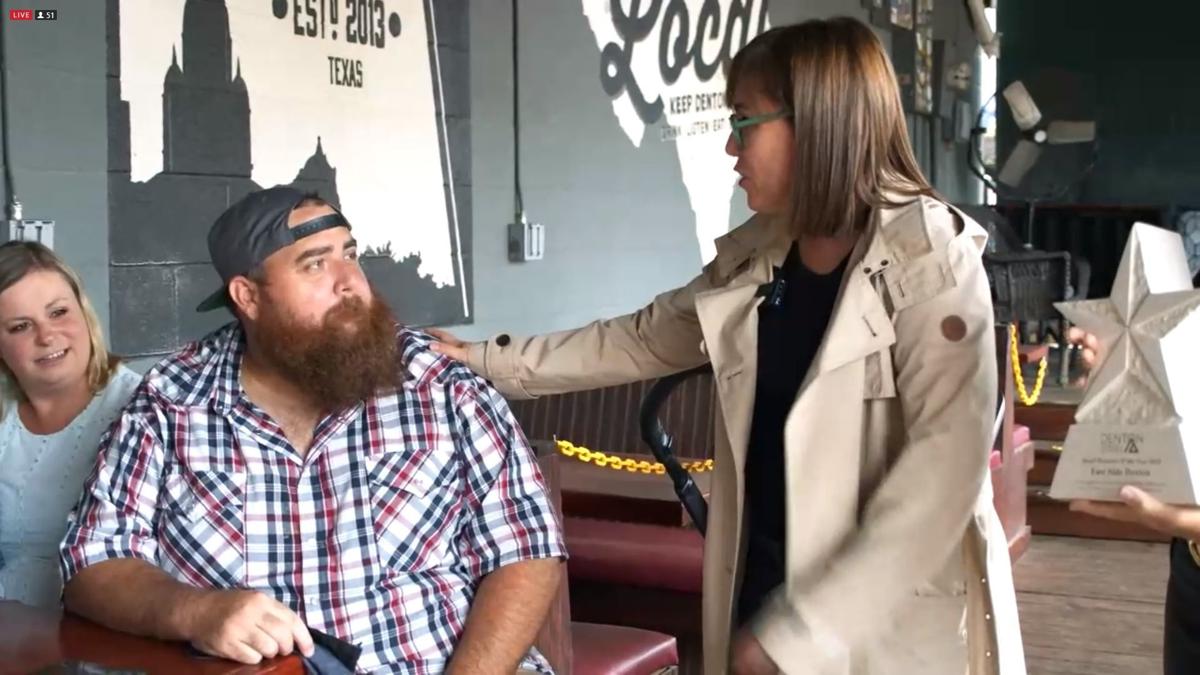 East Side Denton owner John Williams receives the Small Business of the Year Award from Denton Chamber of Commerce President Erica Pangburn during a pre-recorded video shown during the chamber’s annual awards celebration, which was live-streamed this year. 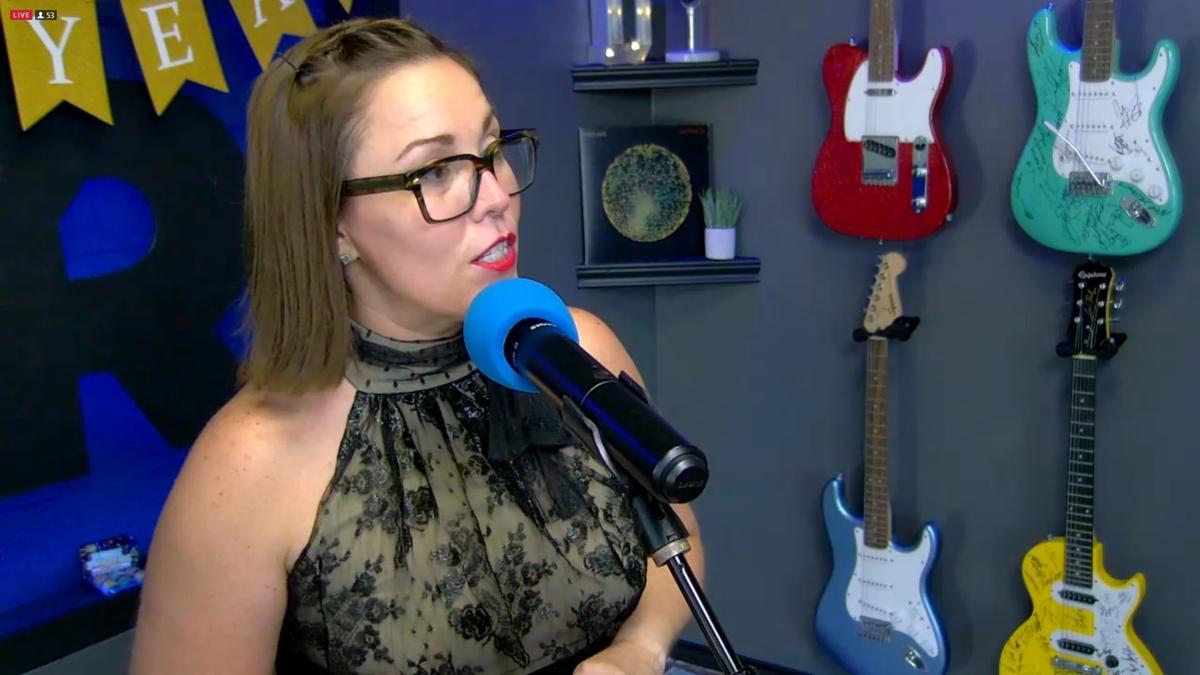 East Side Denton owner John Williams receives the Small Business of the Year Award from Denton Chamber of Commerce President Erica Pangburn during a pre-recorded video shown during the chamber’s annual awards celebration, which was live-streamed this year.

Typically held in person, this year’s celebration fell in the midst of the COVID-19 pandemic. In lieu of a physical event, it was held in livestream format and hosted by Sen. Jane Nelson, R-Flower Mound.

The pandemic has greatly impacted many of Denton’s local businesses. Chamber president Erica Pangburn said it’s important to honor the community’s successes in spite of the outbreak’s influence.

“When faced with challenges, I don’t think that’s an excuse to stop celebrating the wins,” Pangburn said. “Though there have been losses this year, there’s been a lot of wins in our community.”

The Otis L. Fowler Award is considered the most prestigious honor the chamber gives each year, recognizing someone who has demonstrated a substantial contribution to the progress of Denton through their profession. The chamber cited several such examples for Feyten, including leading the establishment of the Jane Nelson Institute for Women’s Leadership and TWU’s diversity initiatives.

“I remember going to those dinners, seeing the awards and thinking, ‘Wow, these people really have done so much,’” Feyten said after receiving her award in a pre-recorded video. “I’ve always believed that a university should be part of the community and an integral partner with the community, so to have this award is really meaningful.”

The chamber also recognized East Side Denton as small business of the year. Owner John Williams reopened the bar last month with more food options and food trucks, in addition to selling products from other local businesses. East Side was chosen for its ability to adapt in the face of the pandemic, changing its business model and working with other local businesses, as well as pushing profits toward non-profit organizations.

“I appreciate this, from myself, my staff and everybody who works here that makes this place what it is,” Williams said. “Thanks to all the people in Denton.”

Two additional awards were given to individuals important to the chamber over the course of the year. Tanya Blixt, executive patient administrator at Unlimited Care of North Texas, was named chamber ambassador of the year. The Chuck Carpenter Award, renamed from past years’ Volunteer of the Year Award, was given to Sara Schroeder, CEO and founder of Sara Jillian Coaching.

Incoming board of directors chair Jeff Reecer, president of Texas Health Presbyterian Hospital, also spoke at the celebration, outlining his vision for the chamber’s year to come. He said the chamber will primarily focus its energy on best serving its members, including through implementing a new tiered membership model that will allow for more customization.

Reecer added that the chamber will emphasize economic development by growing local businesses in coordination with the city itself.

“This new level of collaboration will streamline our ability to create a much better experience for businesses interested in growing with us in our community,” Reecer said.