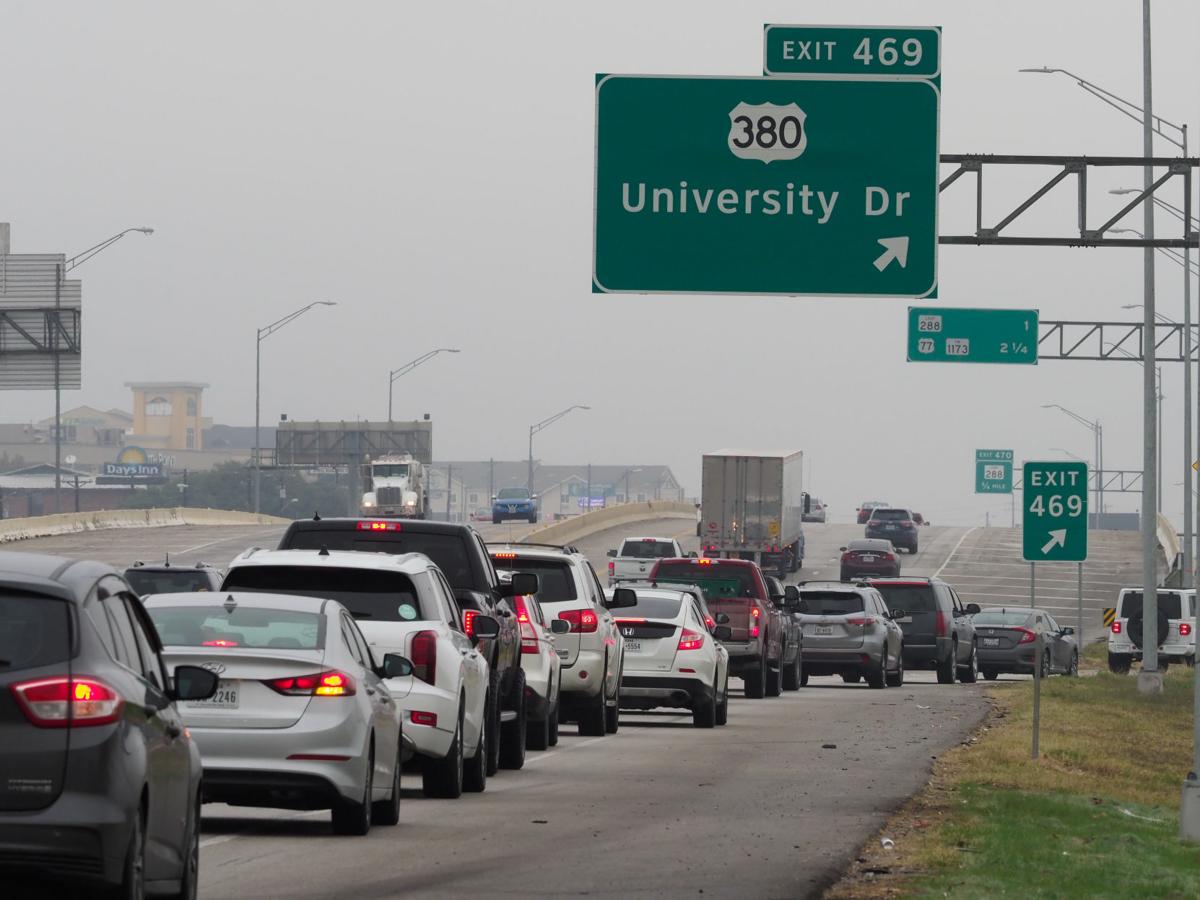 Motorists drive near Interstate 35 near the exit to U.S. Highway 380 on Tuesday in Denton. TxDOT and the city are in early stages of finding interim solutions to address safety in one of the top spots for crashes in Denton. 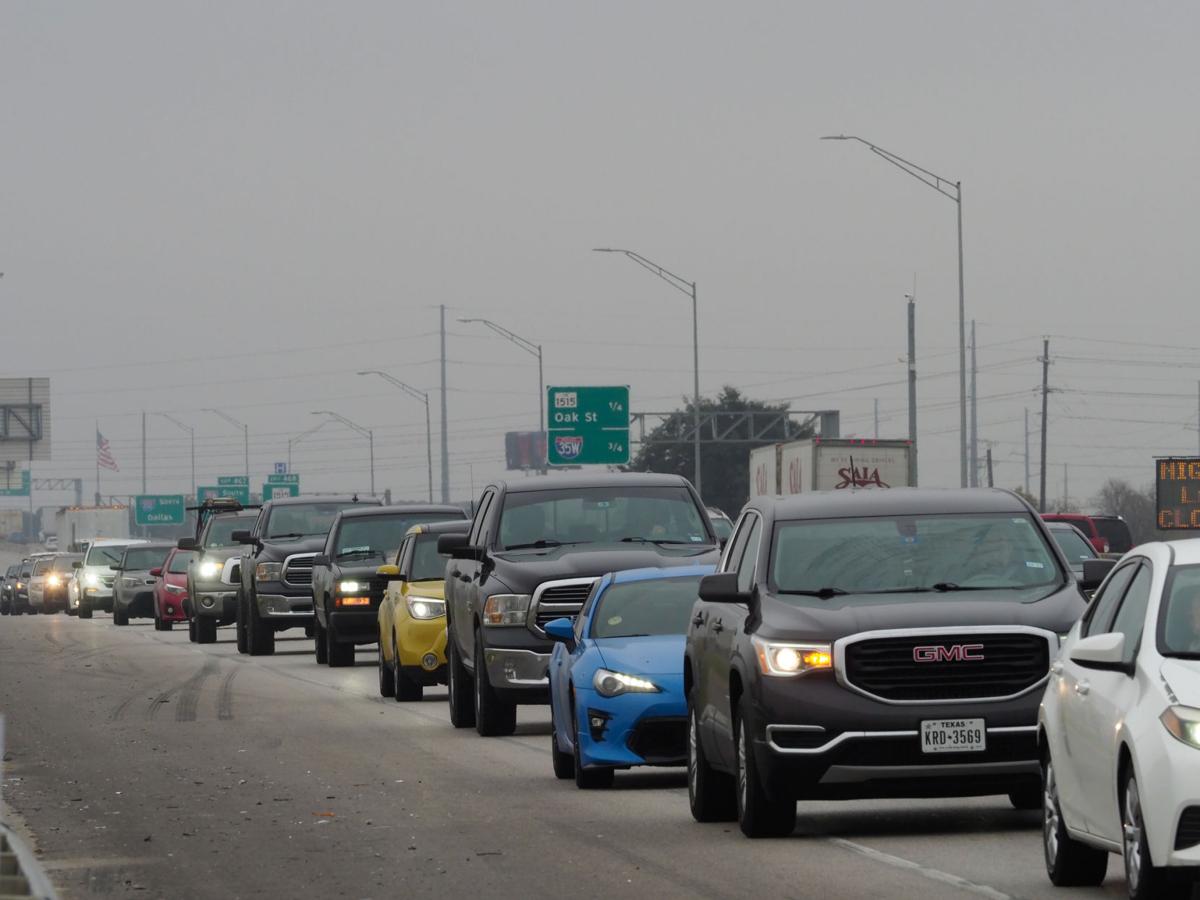 Cars stack up on Interstate 35 near U.S. Highway 380 on Tuesday. The Texas Department of Transportation’s large-scale project to address the highway won’t begin until 2022 at the earliest, so city officials are seeking an interim solution.

Motorists drive near Interstate 35 near the exit to U.S. Highway 380 on Tuesday in Denton. TxDOT and the city are in early stages of finding interim solutions to address safety in one of the top spots for crashes in Denton.

Cars stack up on Interstate 35 near U.S. Highway 380 on Tuesday. The Texas Department of Transportation’s large-scale project to address the highway won’t begin until 2022 at the earliest, so city officials are seeking an interim solution.

Relief may be coming to Denton residents and motorists who frequent Interstate 35 near University Drive — a stretch of highway that is a hot spot for car crashes.

A traffic study count to address safety issues at I-35 near University Drive will take at least two months to complete, according to a city staff report. Rebecca Diviney with the city’s Capital Projects said the city requested a meeting with TxDOT last week to start talking about solutions following multiple emails from concerned residents.

The mile of highway between the I-35E/I-35W merger and just north of the U.S. Highway 380 (University Drive) exit is a hot spot for car crashes. Initially, there wasn’t a plan to address safety issues immediately within that mile-long stretch before larger-scale construction in 2022, but city officials and the Texas Department of Transportation are now trying to find a viable interim solution to put in place until then.

“The goal is to get some of that [interim] stuff completed in advance of the next phase of the project,” Diviney said. “I know it’s [the] top of our priorities, but we do know it’ll take a while.”

TxDOT spokesperson Emily McCann said conducting traffic counts will help determine if proposed solutions will improve conditions without bringing any other detrimental effects in the area. She said city officials will conduct the traffic count, and then TxDOT will review the findings.

“When we look at traffic counts, our engineers are looking to make sure interim improvements can handle a new traffic route,” McCann said. “For instance, hypothetically, if you ask folks to detour or in a general sense try to reduce traffic flow there, that traffic still has to go somewhere. ... We have to see where detour traffic or rerouted traffic might go, and if those roadways can actually handle that traffic load.”

If they find that this could cause more traffic to flow onto Oak Street, for example, they would then need to determine extra signage in the area, McCann said.

The city’s report says some interim solutions that may be considered include reversing the entrance ramp from Oak Street and the exit ramp to University Drive, eliminating the entrance ramp from Oak Street, adding more signage in the area and adding additional lanes on the northbound I-35 frontage road leading to the University Drive traffic light.

I-35 at University sees a lot of traffic daily and has experienced a 50% increase from 2010 in the average annual daily traffic count — up to about 108,000 vehicles passing through in a day in 2019, from 75,000 in 2010. As traffic in the city has increased, development has progressed and Denton’s population has grown, the number of crashes in this area has also gone up.

“[This area] has had explosive growth,” McCann said. “If you go on U.S. 380 and go to 2011 on Google Maps using the Street View and then go to 2019, you see new apartments, large shopping centers. That area has become such a destination for folks, so it’s hard [for TxDOT] to catch up on traffic. Nowadays, we’re looking a little further ahead, looking 30 to 40 years in advance [when planning road construction], but we don’t have the ability to stop development in the area.”

Stores began to open in the Rayzor Ranch Town Center area in April 2016, and Rayzor Ranch Marketplace began opening stores in late 2010, adding to the traffic in the area and leading motorists to exit from I-35.

Meltzer, who is also the chairman of the city’s Mobility Committee, said this intersection is the one he hears the most about from constituents.

“It’s very troubling that it was ever allowed to be designed in such a way to result in [safety issues],” Meltzer said. “It’s pretty obviously dangerous, and we have not heard that there’s anything in the interim that will be faster than the ultimate resolution. I brought up the idea, and heard others as well, of creating an additional lane just to the [University] exit ramp that’s there, so we don’t have a merge there for those two sources of traffic. I’m not entirely convinced yet that it wouldn’t provide some relief.”

Motorists coming from northbound I-35W enter I-35 and merge with the third lane of northbound traffic. The next ramp is its own, fourth lane for drivers coming from the frontage road to enter I-35 by Panhandle Drive. That fourth lane remains for people to exit to University Drive, but that lane ends as an exit only, and the left lane then merges with the second, leaving just two lanes on the northbound interstate a little north of University.

McCann said the traffic count study also will examine where motorists are coming from. The area that will be addressed is where I-35W and I-35E merge — the Y interchange — so engineers will study how much traffic flows into I-35 from I-35W compared with I-35E, as well as incoming traffic from other nearby ramps.

They also have to take into account the current pandemic.

“Not only does the traffic count need to take place, it needs to be studied,” McCann said. “We’re currently in a pandemic. Are these traffic patterns going to hold until the next project comes along?”

The number of crashes reported in the city this year is much lower than in 2019, even with a month still left in the year, according to crash information from TxDOT. The decrease in crashes could be related to the pandemic and decreased frequency in people leaving their homes, but McCann said that’s something they don’t know.

Large-scale construction to address the Y interchange could start in late 2022. TxDOT engineers already have plans for what they’ll change, but McCann said the project is still under development and could change.

“Current plans for the I-35 and U.S. 380 interchange call for it to be fully reconstructed starting in the next several years,” McCann said. “These improvements include reconstructing and widening I-35 and the frontage roads as well as relocating the northbound I-35 exit ramp to U.S. 380 further south of the existing exit ramp, which will give drivers more time and space to proceed to the interchange. The northbound entrance and exit ramp at U.S. 380 will also be braided, meaning one ramp will go over another. The braided ramp will eliminate merging and weaving that currently occurs on I-35.”

TxDOT also has to make sure the interim improvements won’t butt heads with the bigger project.

“Thinking about the interim solutions, is it reasonable and feasible when the next project is coming along?” McCann said. “This ... is estimated as a $350 million project to improve that Y interchange. If [the interim] is a yearlong project, it doesn’t make sense to start that, get it going, when we’re just going to come through again.”