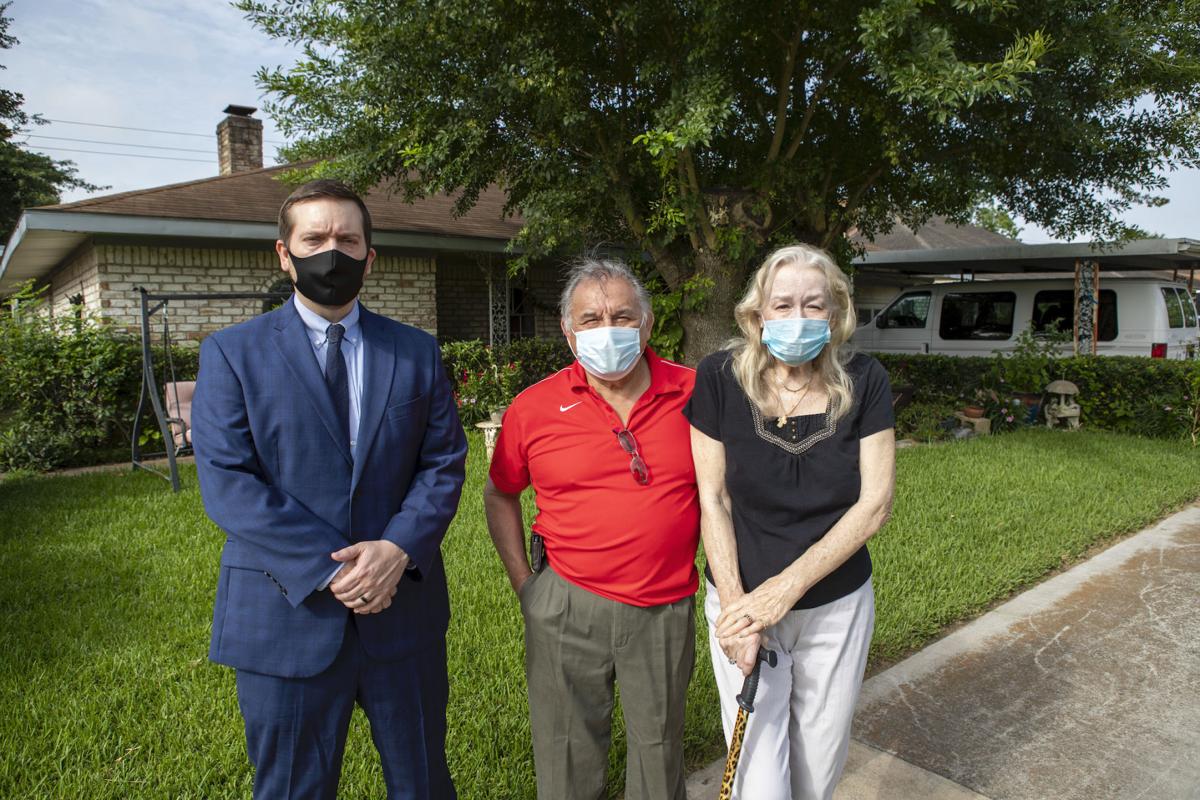 Lawyer Iames Willis (left) is representing Larry and Shirley Reyes of Deer Park in a lawsuit against USAA. USAA has refused to pay for most repairs needed after Hurricane Harvey — and Larry Reyes is suing them.

I couldn’t figure out why I was hearing complaints from several USAA-insured homeowners about the San Antonio-based company not paying storm damage claims.

That may not have happened in the case of Larry and Shirley Reyes of Deer Park, according to court records I’ve studied. What makes this case unusual is that the field adjuster who climbed on the Reyeses’ roof after Hurricane Harvey has turned whistleblower against her old bosses in a lawsuit.

Despite Posas’ initial recommendations in favor of paying the family, a supervisor encouraged her to change her findings, she testified.

USAA declined to pay for most of the Reyeses’ losses from Hurricane Harvey, including roof replacement, damage from a fallen front yard tree, interior water damage from roof leaks and incidentals such as a hotel stay.

Shirley Reyes couldn’t get into their house because she uses a ramp and the fallen tree blocked the entry, said their lawyer, James Willis of Houston.

Larry Reyes told me, “According to commercials I see on TV and how good they talk, I thought they’d stand behind us. But they didn’t. It’s not at all what I thought.”

This is the third such USAA claims denial I’ve studied since I reported in November how USAA’s Better Business Bureau grade dropped from ‘A’ to ‘F.’ Since then, the BBB lifted that grade back up to a B+.

In part one of this new Watchdog series, I focused on a Georgetown couple who won a jury trial against USAA this year for a similar storm claim denial.

In the Reyeses’ lawsuit, neither side expected the whistleblower, a former field adjuster for Allcat Claims Service of Boerne, to throw such a wrench into the works. USAA lawyers even listed Posas in court papers as a friendly witness.

USAA has hired Allcat for nearly 20 years to help with major storm claims, according to an Allcat video on YouTube.

Whistleblower Posas worked for Allcat as an independent adjuster for a year, handling 300 homeowners’ claims in the field on behalf of USAA, she told me.

In her sworn statement, she testified under oath that the Reyes family deserved to be compensated.

The Reyeses’ lawyer argues that USAA should have paid the family $33,000 for a new roof, repairs, hotel and living expenses and tree removal.

But Posas’ Allcat supervisor instead helped her write a report that would give the couple only $2,900 for all damages, well under the Reyes’ deductible.

The couple sued. The case is scheduled for trial in October in a Harris County court. The whistleblower will be a star witness.

I asked USAA, its lawyers and Allcat to speak to me about the case, but all declined.

In court papers filed in the case, USAA lawyers deny the Reyeses’ claims and argue that the couple didn’t prove losses were covered under the family’s policy, meaning its obligations were fulfilled.

USAA spokesman Richard Johnson said he couldn’t talk about the case because of “privacy restrictions.” His company will prove that its decisions were “appropriate,” he said.

He added, “We are passionately committed to serving members, settling millions of claims each year and have a nearly 96% member retention rate.”

‘The way he was taught’

Posas, the whistleblower, testified that at first she recommended paying for a new roof, tree removal and interior repairs.

Her Allcat supervisor, Dale Shaffer, told her he believed the tree was cut down before the storm, the roof didn’t need replacement and any interior damage came from flooding (not covered by USAA insurance) rather than from a leaky roof.

“He expressed his own opinion to me and asked me to change my estimate,” she said. “And I ended up changing my estimate. ... I think that he took advantage of the idea that I did not have the extensive experience that he had and assumed that he could convince me that his opinions were more accurate than mine.”

Her training for the job lasted under two hours, she said, with most of it in front of a computer.

Posas told me she didn’t believe Shaffer purposely did anything wrong.

“That’s the way he was taught.” she said. “Those were the guidelines he was given, and he was doing the job he was ordered to do.”

It was different for her, she said. “I couldn’t turn a blind eye, and I surely wasn’t going to lie. I had no intention of being a whistleblower. My only intention was then and still is to do what was right. Plain and simple. … I refuse to stand by when something is utterly wrong.”

Willis, the Reyeses’ lawyer, introduced evidence of two different incidents of tornadic activity in the neighborhood, along with satellite photos showing the tree was still standing before the August 2017 hurricane.

When I told the whistleblower that three years later there still are buckets collecting rainwater in the Reyes house, she said: “I can’t believe that. That is so sad. That’s why I’m doing this.”