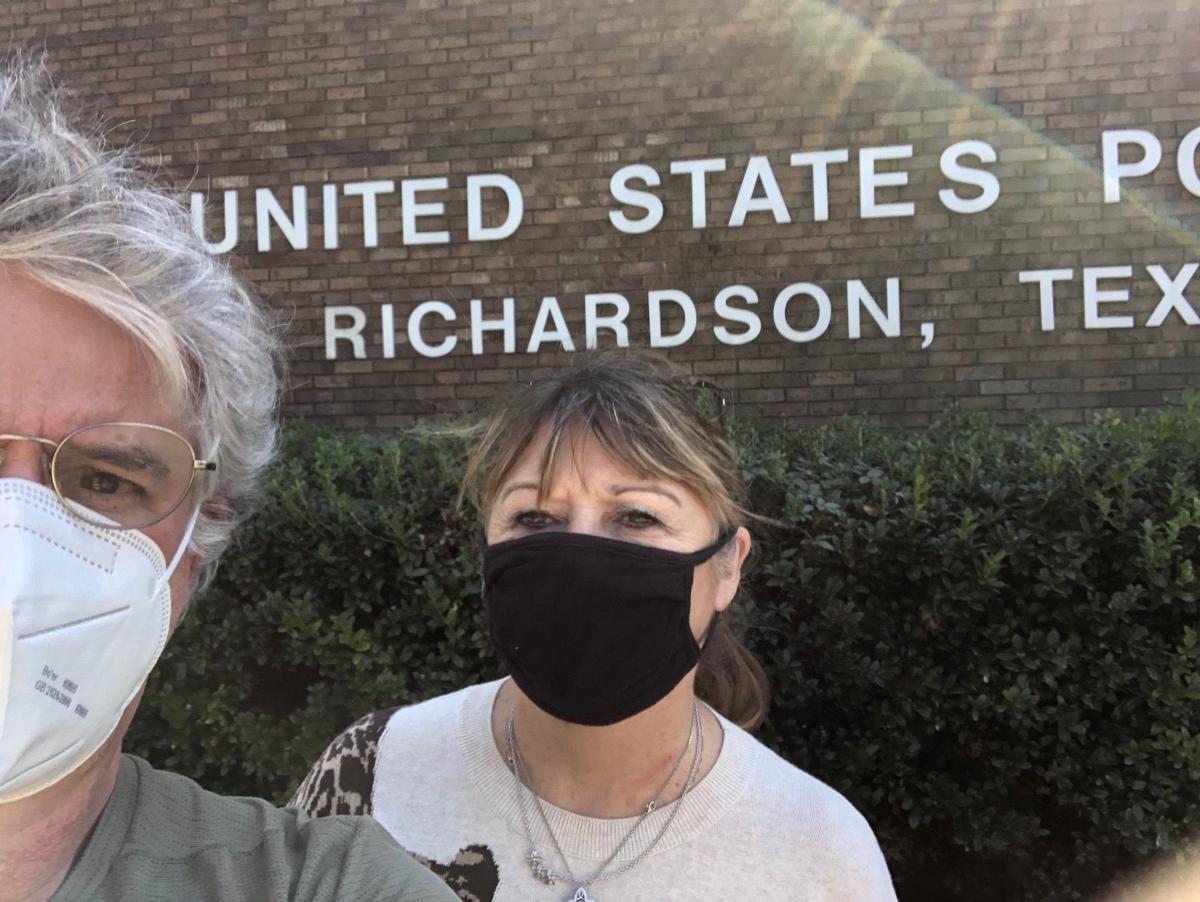 Columnist Dave Lieber and his wife, Karen, a direct mail expert, traveled to five Dallas-Fort Worth post offices to mail 50 letters in a test of the area postal system.

Back in August when the big story was how the U.S. Postal Service was getting gummed up so that, possibly, mailed ballots wouldn’t arrive on time by Election Day, editors assigned me to the story.

The Watchdog was tasked with testing the timeliness of U.S. mail deliveries.

The editors offered clear instructions. I was told to mail 50 letters to 50 members of The Dallas Morning News staff, track the mail’s arrival and report the results.

So I did exactly as I was told. That night, I stood at my kitchen counter and addressed the envelopes to 50 of my colleagues. I stamped each one. Then I contacted all 50 (ironically by email) and told them to look for my letter and let me know the day it arrives (again by email).

When my wife, Karen, saw what I was doing she scolded me. “That’s not how you run a mail test!” she snapped.

Usually, that would be it. From a military family, she understands orders and the chain of command. But to her there was a problem with this particular order. My wife worked many years in charge of a large company’s direct mail department. If anyone knows about testing mail, it’s her.

My sweet Direct Mail Expert was so ticked by this experiment that she barely spoke to me for the next several days, and when she did, she always said the same thing: “That’s not how you do it.”

The results came in, and they weren’t very good for the post office. By the end of the second day, when first-class mail is supposed to get delivered locally, I only knew that about half of the letters arrived on time. But it was hardly scientific. If I could do it again, I could do better.

This next time, I put sweet Direct Mail Expert in charge. There was peace at my kitchen counter.

Together we worked out a plan: 50 letters sent to our house. Ten each from five main post offices across the region. We mailed on Columbus Day, when USPS was closed so no one had an advantage in pickups.

The next day was also the first day of early voting in Texas.

At each stop, Direct Mail Expert did the actual mailings, always walking inside to the collection box because mailing outside is a no-no in our family. I’ve done too many stories about mail stolen from outdoor stand-alone mailboxes.

As we drove 100 miles that day, we pretended we were on a super fun date. At every post office we snapped a selfie.

A few days later, Direct Mail Expert logged in the arrivals. This time, I have more confidence in the accuracy of the results, which I’ll share in a moment.

There should be no problems with the post office delivery now that Postmaster General Louis DeJoy has scuttled his plan to order major changes to post office operations, he said, to save money.

For part of the summer, mail got jammed up, which, some think, may have been his goal.

By Oct. 1 DeJoy announced a dramatic change in his plans. After a huge outcry and his testimony before Congress, DeJoy said Election Mail, as it’s called, will get top priority for on-time delivery.

This week, USPS area spokesman Albert Ruiz sent me a statement: “The postal service’s number one priority between now and Election Day is the secure, on-time delivery of the nation’s Election Mail.”

He also changed his policy and allowed extra deliveries and collection trips as well as the payment of overtime. This was done, he said, in the name of making certain that election ballots arrive at their destination before deadline.

This was reinforced last week when a lawsuit by Montana Gov. Steve Bullock against USPS was settled. The lawsuit charged that DeJoy’s changes impeded delivery of medical prescriptions, payments and job applications, along with voting by mail.

USPS promised the federal judge in Montana that it won’t reduce retail window hours or consolidate mail processing facilities, in addition to halting other changes DeJoy previously announced. The agreement applies to all states.

It used to be that a first-class letter mailed anywhere in Dallas-Fort Worth to another area address was supposed to arrive in one day. A while back, USPS gave itself some breathing room and changed the local delivery time to two days.

So in my experiment, if every letter arrived by the second day, that’s a win for USPS.

Direct Mail Expert told me that logging in the deliveries was especially easy because the mail’s arrival fit a perfect pattern.

On day one, every letter mailed from Plano arrived. Every letter from Richardson and Southlake arrived too.

On day two, every remaining letter from Dallas and Lewisville arrived.

Out of 50 envelopes, there was not a single straggler. USPS earned a perfect delivery score of 100%.

The president of the local chapter of the National Association of Letter Carriers, Kimetra Lewis, told me this was no fluke.

“The postal service has improved,” she said. “The morale and everything has improved since the lifting of the mandate to delay the mail. It has been a drastic improvement in the morale of the employees and in getting the mail processed timely.”

Now I understand that some of you may have problems. Your birthday card to Aunt Suzie in Michigan was late. A package mailed to you has never arrived. Here, I just wanted to see what the chances are that Election Mail will arrive in time.

It’s been tough times for the 630,000 USPS employees for a lot of reasons, especially coronavirus and politics. I wish they all could know they scored 100. Consider showing this story to your carrier with a nice note attached.

And thanks for the help from my sweet Direct Mail Expert.