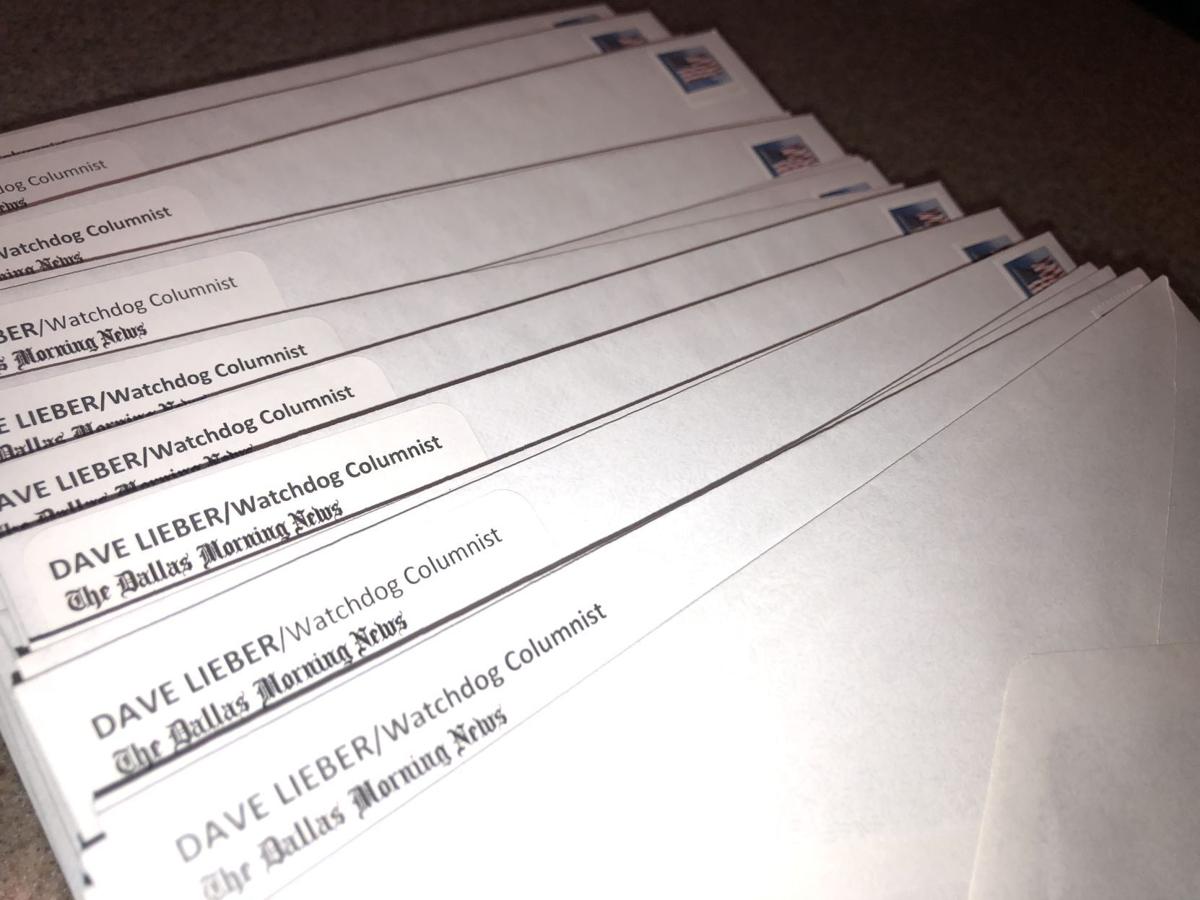 OK, we know the mail is late. Often very late. Now The Watchdog can prove it. I ran a mail test last week by sending letters across Dallas-Fort Worth. The results are an embarrassment.

The post office is looking at what could be its worst service breakdown in its 228-year history.

You know most of the reasons: Overtime was halted. Blue collection boxes were taken off the streets. Sorting machines were disconnected and decommissioned like old Navy ships taken to a scrap yard.

But The Watchdog has discovered another reason for mail not getting delivered on time. You probably didn’t hear about this reason.

Starting in late July, before the delivery crisis began, the U.S. Postal Service launched a surprise test for mail carriers. The test came with a name that’s just mumbo-jumbo enough to confuse you. It’s called the Expedited Street/Afternoon Sortation test.

A better name would be “the Carriers Only Get 15 to 30 Minutes to Get Out the Door Test.” Its purpose, according to top officials announcing it, is “to assist in reducing the morning office time for city letter carriers by enabling them to get on the street earlier.”

The goal was “to enhance customer service by providing more consistent delivery times.”

But here’s what happened. The test was unprecedented because it disrupted the normal flow of mail delivery. Almost 400 branches across the nation were ordered to participate, but I’m told that many other branches ended up testing some aspect of it.

Inside the post office, it was nicknamed “Grab what’s there and go.” Carriers had 30 minutes (in some cases only 15) to finish prepping their mail for delivery, checking their vehicle, grabbing their scanner and keys and departing.

Whatever mail was not sorted before that new grab-and-go deadline was left behind. There was always tomorrow to deliver the rest. Maybe.

Within days, mail got backed up almost everywhere. With the elimination of overtime, no one was getting paid to finish the daily delivery. Undelivered mail was stored inside or left on loading docks. USPS’ own delivery standards were ignored. Among the late arrivals: medicines, income checks, bills. (Cue the dying baby chicks.)

“The mail being processed was drastically delayed,” said Kimetra Lewis, president of the Dallas chapter of the National Association of Letter Carriers. The stress among her carriers was palpable. “The carriers were calling me on a regular basis” to complain, she said.

“Nearly every office was implementing their own version of the test,” she said.

“This test was totally different from ones in the past,” says Yared Wonde, president of the Dallas branch of the American Postal Workers Union. “This one is, if the mail is not cleared by 9 a.m., leave it on the floor for the next day.”

You may have noticed my sources for this information are two local union presidents. That’s because for the first time in 15 years covering USPS, their media representatives are not allowed to talk to me.

“We are not currently providing any interviews,” usually helpful spokesman Albert Ruiz told me. He didn’t give a reason, but I found it in a USPS directive that could have been titled “Our Bunker Mentality.”

Vice.com first reported contents of the order: “The Postal Service continuously strives to project a positive image, protect its brand, and present a unified message to the customers and communities it serves,” the memo begins. “It is imperative that one person speaks on behalf of the Postal Service to deliver an appropriate, accurate and consistent message to the media.”

And that one person is new Postmaster General Louis DeJoy, whose fast retreat from enacting his supposed reforms included everything but waving a white flag. After a people’s revolt led to bipartisan criticism from lawmakers, DeJoy issued a statement that he was pulling back.

In one of the biggest retreats since General Robert E. Lee fled the Battle of Gettysburg, DeJoy, who has donated more than $1 million to President Donald Trump’s campaign funds, promised to halt drastic actions that he and his minions had pushed in his first weeks on the job.

DeJoy vowed in his published statement: “To avoid even the appearance of any impact on election mail, I am suspending these initiatives until after the election is concluded.”

That sounds counter to Trump’s motives. He has said that he initially opposed more funding for troubled USPS and hoped to avoid “universal mail-in voting” in his reelection bid.

Yes, the Postal Service has massive short-term and long-term problems. But is now the right time to break the vast system into dysfunctional pieces?

Ellis Burgoyne, who ran the Texas region as Southwest vice president 15 years ago before his promotion to USPS’ chief information officer, is now retired in Irving. He told me, “Holding mail a day to process was always a no-no. ... Total elimination of overtime and intentionally leaving first class mail behind was never an option. We never had that, and I worked there for 35 years.”

Why would you remove and dismantle working sorting machines in the midst of all these other changes unless you wanted to bog down the system, maybe even make it harder for mail-in election ballots to reach their destination before deadlines? Aside from the people in the processing plants, mechanical sorters are the heart of mail delivery.

Wonde of the postal workers union estimates that between Dallas’ Main Post Office near Interstate 30 and the North Texas Processing and Distribution Center in Coppell, a dozen sorting machines have been removed in recent weeks.

“They didn’t give any specific reason for that,” he said. “I officially requested how many machines were removed and how many were decommissioned.” He hasn’t heard back.

Wonde said workers tried to put one of the machines back in operation at the Dallas plant, but they were missing important parts.

I mentioned my test. Until a few years ago, a first-class letter mailed within North Texas, from and to a local address and dropped off before 5 p.m., usually arrived the next day.

Now USPS service standards allow for a letter mailed locally to arrive in two days, instead of one.

How’s that working? I took addresses for 50 Dallas Morning News employees who live in Dallas-Fort Worth. On Monday night, I mailed envelopes to each of them from my city post office. I also emailed my lucky 50 to let them know they’d been drafted into my experiment.

Under USPS standards, all letters should have arrived in two days — by Thursday’s mail. But more than half didn’t.

Another five arrived one day late on Friday.

As of Saturday morning, as I complete this, I’ve yet to hear back about another 24, or 48%.

Admittedly, this is no scientific survey. But with half of the sent letters failing to meet the goal, it’s an indicator. (The Watchdog wants to check again during early voting.)

Burgoyne, the retired former USPS vice president for Texas, added that when he was in management, “Election and political mail, including ballots, had the highest priority.” (We’ll see if that tradition holds.)

Lewis of the letter carriers’ union says she worries about the cost of this mess to USPS’ reputation. “We don’t know if our customers lost confidence in us. It’s frightening.”

NOTE: If you desire a mail-in absentee ballot, contact your county elections office for information. You can also request one online. Requests for mail ballots must be made before Oct. 23. Make sure you fill out your ballot and send it back as soon as possible. To qualify, you must be 65 or older, disabled or out of your home county on election day. The last day to register to vote is Oct. 5.