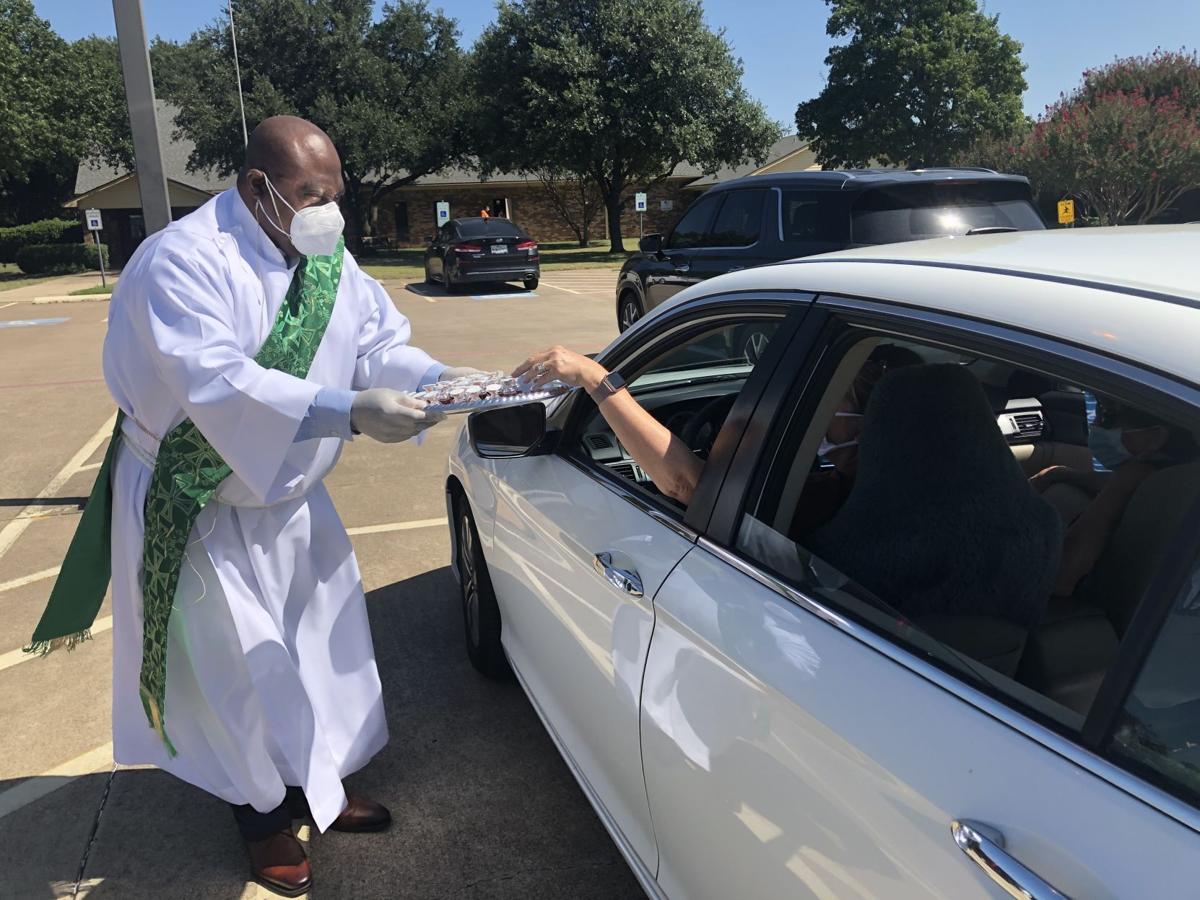 The Rev. Ayo Omoniyi goes from car to car during Communion Aug. 9 at the St. Martin-in-the-Fields Church in Southlake.

“Come with me to my church on Sunday,” my wife said.

“We’re having our first in-person service since February,” Karen said.

That’s how I ended up Sunday in the back seat, sweaty but prayerful, as Karen and her mother sat up front. We were outside St. Martin-In-The-Fields Episcopal Church in Southlake, watching the service transmitted from inside the almost empty sanctuary via the church YouTube channel.

It was strange. There were 18 cars scattered. The reading was from the Book of Genesis, the part where Joseph’s brothers strip him of his amazing coat and toss him into a pit.

A male voice announced that a volunteer would shepherd the collection plate from vehicle to vehicle. He asked drivers to flash their headlights to signal their generosity and please wear a face mask during the collection.

As drivers flashed their headlights, I thought of another church man who had shared a much larger collection plate all the previous week in what is the opposite of my parking lot experience.

Televangelist Kenneth Copeland hosted his 40th Southwest Believers’ Convention. But this convention wasn’t virtual for online viewing. Copeland, 83, invited thousands to join him at the Fort Worth Convention Center for an event that lasted six days earlier this month.

It was the first public event at the convention center since March, said Mike Crum, director of public events for Fort Worth. He estimated most of Copeland’s sessions drew between 2,000 and 3,000 attendees. That’s down from previous years, in part, because this year international attendees could not travel here.

Rather than cancel the event, Copeland took advantage of the religious exemption in Gov. Greg Abbott’s coronavirus safety rules to hold his Aug. 3-8 gathering with free admission.

In Texas now, religious services may be held indoors, with recommended social distancing. Masks inside a religious event are optional.

I did not attend the Copeland event, but I’ve studied videos posted online. One video shows a brief shot of the front rows. Attendees sat close to one another. I counted 60 people with only two wearing a mask.

Another YouTube video shows people leaving the center, most not wearing masks outside, which is counter to Fort Worth’s requirement.

All of this is quite a contrast to what took place in that church parking lot.

Copeland’s and his church’s holdings are based in Newark near the Tarrant-Wise county line. They include an 18,000-square-foot mansion, his church, ministry headquarters, TV studios, a private airport and planes. His wealth is estimated in the hundreds of millions of dollars.

A disciple of Oral Roberts, for whom he served as a chauffeur and a pilot, Copeland tries to keep a low profile in North Texas and doesn’t give interviews.

A decade ago, he was investigated by the Republican-led U.S. Senate Finance Committee as part of an examination of top TV preachers who obtain nonprofit status from the Internal Revenue Service. Copeland declined to answer many of the senators’ questions, decrying the probe as an attack on religious liberty.

He recently attracted attention when he called the coronavirus “a weak strain of the flu.”

“COVID-19,” Copeland shouted, according to one widely shared video. He blew what he called “the wind of God” into the camera and ordered “Burn!”

“I hollered at the top of my voice, ‘In the name of Jesus, you get back up there where you belong.’”

One YouTube video shows a lone protester outside the Fort Worth Convention Center at Copeland’s event. The man carried a sign that announced “Greedy wolves inside feeding on sheep.”

Meanwhile, at my wife’s church, in the six months it’s been closed, the only big news was the theft of incoming checks that someone stole from the church mailbox. The matter was turned over to the authorities.

I called Kenneth Copeland Ministries and asked to speak to someone about the Believers’ Convention. After a woman took my name, number and my reason for calling, she promised to pass it on.

Then she asked, “Is there anything I can pray with you about before we hang up?”

“I would just pray,” I answered, “that somebody would call me back so I can include someone from the ministry for my story.”

“All right. All right. I believe with you,” she said.

And so, we prayed.

But no one has called.