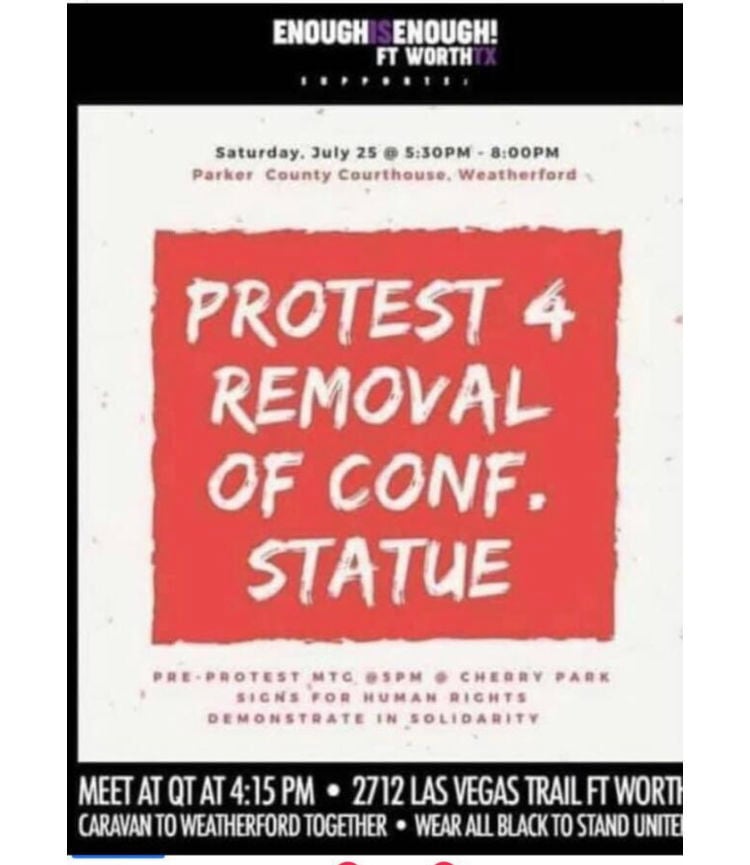 This flyer announced a protest march in Weatherford on July 25.

If civil war breaks out in America, what happened in Weatherford a week ago shows how easily it can begin. Out-of-town protesters clashed with Parker County residents on the courthouse lawn in one of the more violent Texas gatherings this troubled year.

Weatherford came close to becoming a symbol like Fort Sumter, site of first shots fired in 1861. There was enough weaponry on both sides to classify the event as a mini-gun show.

The Watchdog talked to both sides after Saturday’s skirmish, and what I found was that the entire episode appears to have been caused by one misplaced symbol on a protest flyer.

‘They came to us’

For Roy Montelongo, 23, a social media entrepreneur and recording artist, his Fort Worth-based protest group’s name says it all — Enough Is Enough. “We’ve been victimized our whole life,” he said.

For Jim Webster, 75, a former Parker County commissioner known for pulling a trailer behind his truck with life-size figures depicting Bill and Hillary Clinton and Barack Obama in jail, enough is enough for him, too.

He added, “If you wave a flag in front of a bull, what do you expect?”

If Montelongo’s Saturday is any indication, the life of a protester can make for a long and dangerous day. This particular day began early, at 7 a.m. with, of all things, a back-to-school clothing and school supply drive his group hosted at the Tarrant County Courthouse. The timing wasn’t good.

That same morning, a pro-police rally gathered nearby in downtown Fort Worth. As that gathering approached Enough Is Enough, police formed a line separating the two groups. Both sides taunted one another. The volume turned up.

“One guy put on brass knuckles and came up to me,” Montelongo said.

Outnumbered, his group packed up and headed to their next engagement: Weatherford. Home of another of those century-old Civil War statues.

Jim Webster and 500 people were waiting.

“How did this whole thing happen?” I asked Webster.

“Did you see the flyer that was sent around?” he answered. I hadn’t, so he texted me a copy.

“The flyer was circulated around town,” he said. “It said they want to try to tear down the statue.”

In a quick read, the flyer appears to announce: “PROTEST & REMOVAL OF CONF. STATUE.”

“This isn’t Portland,” Webster said. “We’re not going to get pushed around by these guys.”

Despite what the flyer appeared to say, the point of his group’s visit to Weatherford, Montelongo said, was to show support for those who want to see the statue removed, not to damage it in any way.

The protesters, some clad in all black, wearing full face masks and carrying umbrellas, arrived before 6 p.m. They marched in single file toward the courthouse.

Montelongo’s group, along with other supporting groups, totaled about 50. They were outnumbered 10 to 1.

Their arrival was met with taunts, water bottles tossed at them and guns pointed in their direction, including at least one rooftop sniper visible in event photos.

“We’re not here to start a war,” Montelongo said. “We’re not going to start anything we can’t win. We’re here for change. … These people were ready for war.”

Police — local, county and state — tried to separate both sides.

The goal was to keep everybody on the sidewalk, out of the street. The two sides were mostly divided, but there was crossover. When there was, discussion was not always polite.

There was only so much police could do. Both sides pushed and name-called and made threats. Videos show several from the Parker County side throwing sucker punches at the visitors.

From the Parker County side, one man was arrested for starting a fight, while another was cited for disorderly conduct, according to the Parker County Sheriff’s Department. None of the out-of-towners were cited or arrested.

After possibly 45 minutes of this, Enough Is Enough lived up to its name. Nothing could be gained by staying. The out-of-towners headed back to their vehicles. Some were taunted by locals, others escorted by police.

Webster called it a victory: “I’m proud of my town,” he said. “They came to us to create havoc and trouble. They didn’t come to protest. They came to tear down our statue. It’s not so much the statue because Black lives do matter. All lives matter.”

Montelongo said that with all the Confederate flags waved in their faces, “they were basically a Confederate racist party.”

Both men agreed on one thing:

“I was afraid that somebody would pull a trigger and war would erupt,” Webster said.

“I’m surprised no shots were fired,” Montelongo said. “It would have been a massacre.”

How was this caused by one misplaced symbol on the protest flyer that circulated around Parker County?

The Parker County people read the Enough Is Enough flyer to say “PROTEST & REMOVAL OF CONF. STATUE.” It does appear to say that.

But when I look closer at the flyer that riled Parker County, I see that the protest group’s intention was that the flyer state “PROTEST 4 REMOVAL OF CONF. STATUE.”

It’s an important distinction. What looks like an ampersand is actually supposed to be a 4. Remember, Montelongo insisted that nobody planned to remove the statue, just protest for its removal.

One confusing symbol, I believe, created this massive misunderstanding.

Over such small errors, the ugliest things can begin.

Note: On Tuesday night, the Weatherford City Council announced that it wants Parker County Commissioners to remove the statue from the courthouse grounds. But on Thursday, the county commissioners voted 5-0 to keep the statue in its current place. Some commissioners said they heard from a majority of residents wanting to keep it.