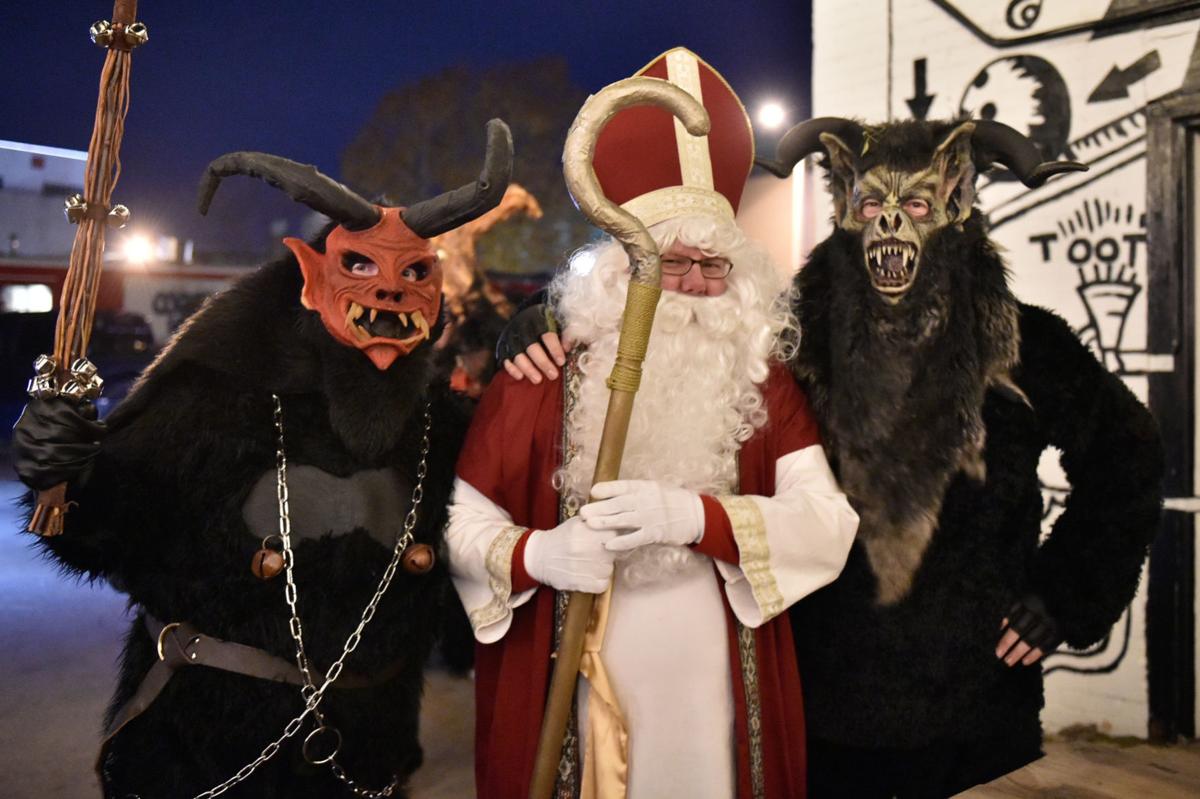 The Christmas monster Krampus returned to Denton last year for the Krampuslauf parade — the centerpiece of Krampusnacht. This year’s parade hit a snag with a new special events ordinance. The parade will go on, but on the sidewalks lining the streets behind the Square. 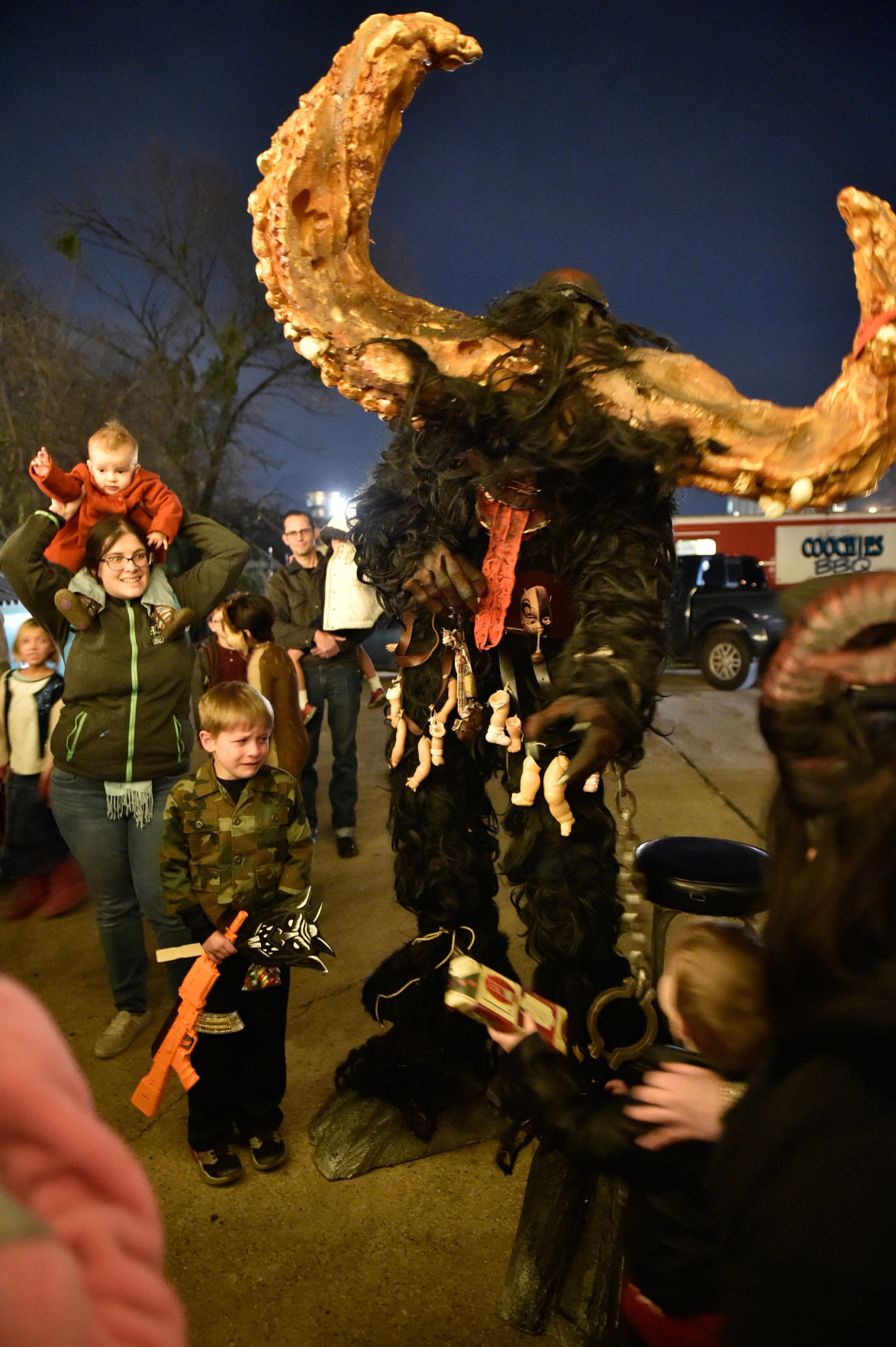 Krampus returned to Denton last year for the Krampuslauf parade, the centerpiece of Krampusnacht, which falls every Dec. 5. People dressed as Krampus, the half-goat, half-demon figure of German and Austrian folklore that punishes naughty children with whippings and maybe even an abduction to the underworld. A new special events ordinance nudged the Krampuslauf parade out of the streets behind the downtown Square and onto the sidewalks. The new ordinance requires events to provide traffic flow plans from barricade companies to the city 60 days before the event.

This story has been updated to add the time the event begins. See box with story.

The beloved Denton Christmas demons will definitely be on the march near the Square on Thursday, but the event snagged a cloven hoof on a newly passed ordinance governing special events.

Krampusnacht is a new Denton event. The cheeky celebration uplifts the darker side of Christmastime with a parade of people dressed as Krampus.

Krampus is a hairy half-demon, half-goat creature from ancient Central European folklore. As the tales have it, the towering, horned demon would visit the homes of naughty children during the winter to punish them. In Europe, Krampusnacht (the night of Krampus) falls on Dec. 5, the day before St. Nicholas Day. All across Europe, crowds gather to watch people dressed as the goat-demon trot through parade routes, where they stop to growl, glower and brandish bundled switches at the children in attendance.

Last year, the costumed participants walked through the streets directly behind the downtown Denton Square. Shaun Treat, a co-founder of the Denton Krampus Collective, was surprised this year when he learned that the new special events ordinance required a traffic flow plan by a company that would supply barricades. Those barricades come with a cost the collective didn’t plan for — roughly $1,400 — Treat said.

“I didn’t know about the new ordinance until it was after the 60 days the city needs under this new ordinance,” Treat said.

This year, the Krampuses will walk on the sidewalks along the streets behind the buildings on the Square with police escort. The issue was settled in a meeting Wednesday. In an interview Tuesday, Treat said Denton Krampus Collective will be starting its Krampusnacht planning much earlier.

He negotiated with the city of Denton’s Special Events Coordinator Jennifer Eusse and the Denton Police Department to classify Krampusnacht as a First Amendment event, given the pagan origins of Krampus.

“They worked with us, which was great, so that we could put the event together in a shorter time frame,” Treat said. “I want to work with the city in good faith because we want to keep Krampusnacht an annual event.”

Eusse said the new ordinance passed over the summer. She didn’t know why the ordinance went into effect immediately instead of in January, but she said the city gathered contact information for all of the annual events in Denton from the last two years.

“We sent an email to all of the organizers, and it wasn’t a form letter. It was a very visual explanation of the changes that might be coming,” Eusse said. “The Turkey Trot, at the end of the event last year, they immediately started contacting us and asking if there were any developments they should know about ... . We discussed implementing it [the ordinance] right away when it was passed. We have tried to take it at a case by case basis. We want to work with the events. Public safety really is the most important thing.”

Eusse said there are at least 10 special events on city property each month, and often more than 10. The department presented the unplanned costs for city staff members in the police, fire and parks departments. The Parks and Recreation Department asked the City Council to draft a new ordinance that would protect public safety while offsetting the costs of hosting events on city property.

When police and fire send officers to the events, Eusse said, they’re almost always coming from a regular shift and putting in overtime. They have been paid from their departments’ overtime budgets. The earlier ordinance allowed planners to submit parade applications as late as about one week before the event. That meant police would have to close streets and staff the route without enough time to budget for the event.

Part of the reason the costs have gone up is that Denton’s celebrations have grown in size and number.

“You’re seeing the events grow immensely,” she said. “When you have 10-plus community events a month on city property, whenever you get to that point you have to stop and figure out how you have enough police, enough fire and trash. Seriously, the trash. If you don’t have a plan for trash management, people call the city the next day.”

The new ordinance also requires event planners to have insurance to protect organizers from liabilities.

The Krampus Collective launched a GoFundMe campaign to cover the costs for barricades and police officers working the event. Treat said he’s spent several weeks reading the new ordinance and a guide published by the city. He said the ordinance is confusing in some parts.

“The ordinance says that you have to submit your plans 60 days before the event, but in another spot it says you have to submit 90 days,” Treat says. “For First Amendment events, you can submit a plan in a way shorter time-frame, which is clearly to allow people to put together marches and political protests. In an age where you have events like Charlottesville, you have to be concerned about public safety. Denton wants barricades from a professional barricade company because they don’t want an SUV driving into a crowd. Unfortunately, we live in a time where stuff like that happens.”

Treat said organizers should read the ordinance and guide closely.

“This thing is damn near unnavigable, and I have three degrees on the wall,” he said. “Again, I want to work with the city in good faith. I want this thing to happen every year. But it makes it almost impossible for small groups or pop-up events to afford. It’s like we’re giving tax breaks for the big guys to build their McMansions, but the small players have to pony up more. I think it’s going to make it harder for smaller groups. You don’t want to sacrifice safety, but it’s harder for small groups to afford.”

Treat said a lot of the Krampuses have spent about $100 on presents they will pass out to children at the event. Families are encouraged to attend to watch the Krampuslauf parade, take pictures with the monsters and collect a present. The GoFundMe page is here: http://bit.ly/2Phe9s7.

“We have to decide if we’re going to become a full-fledged 501(c)(3) and become a nonprofit,” Treat said. “We haven’t talked about getting sponsors, but we have had such great support from Ben Esley at Bearded Monk, Denton Brewing Company and East Side. But even businesses that aren’t directly involved, like More Fun Comics and Games gave us money because they wanted to help this year after we found out about the expenses. But we definitely have to get our [expletive] together to do this next year.”

What: A celebration and walking parade of Krampuses, the half-goat, half-demon creatures who pass out presents to children (after menacing them)

Where: Gather at the Bearded Monk, 122 E. McKinney. The Krampuslauf parade starts there and then weaves through the dark back alleys of the Square.