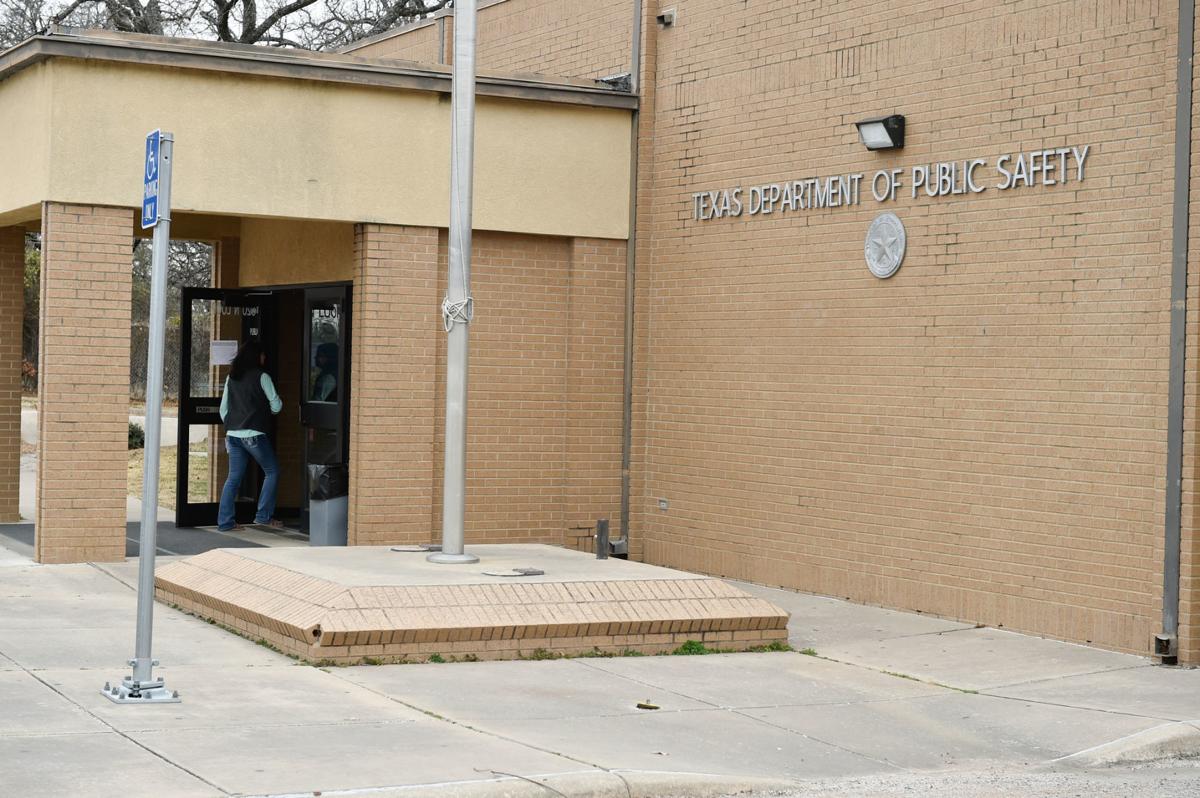 A woman enters the Denton office of the Texas Department of Public Safety on Thursday. A notice on the front door of the office tells customers the office was processing only limited transactions involving drivers licenses. The Texas Legislature is looking to help alleviate wait times for customers at driver’s license offices. 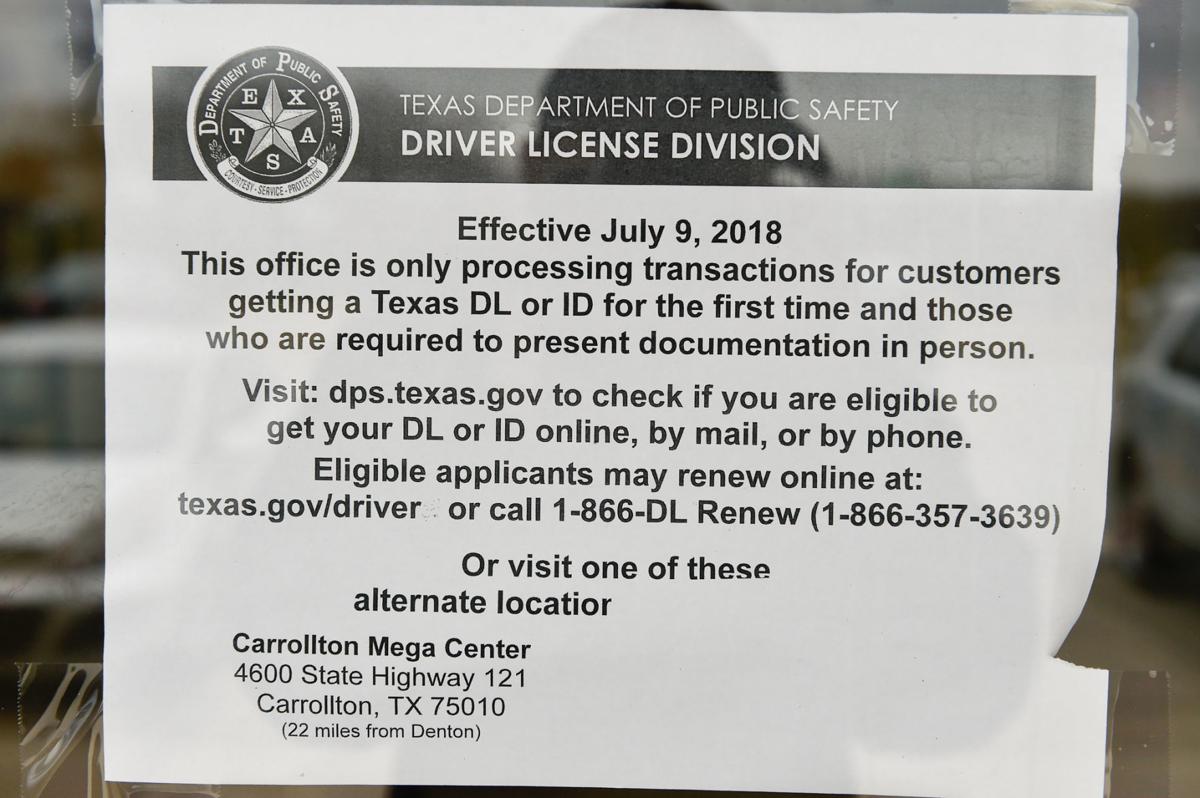 A notice shown posted on the door Thursday at the Denton office of the Texas Department of Public Safety tells customers only limited transactions concerning drivers licenses will be handled there.

“I would personally just say, Steve, fix the damn thing,” Sen. John Whitmire, a Houston Democrat, told DPS Director Steven McCraw. “We need you to respond like your job depends on it.”

Driver’s license office reform is shaping up to be a hot topic for the 86th legislative session. In his acceptance speech earlier this month, Texas House Speaker Dennis Bonnen, R-Angleton, raised two thumbs up after he announced his goal to alleviate “frustrations people feel when they visit one of our state’s driver’s license offices.”

In its 2020-21 funding request, DPS asked for an additional $420 million to properly staff current driver’s license offices and increase the number of locations. The new House spending plan would add $200 million and 962 new full-time employees to shorten wait times at state driver’s license offices — and transfer the program from DPS to the Texas Department of Motor Vehicles.

The Senate budget proposal listed no major changes, but senators debated reforms Monday at the Senate Finance Committee hearing. Should the solution involve more money, a different agency, or both? Although Senate Finance members disagree on the specifics, they agreed that long wait times at driver’s license offices need a fix.

Even though funding to improve the program has more than doubled since the 2013 budget year, wait times at driver’s license offices and its call center have worsened.

According to a legislative analysis of the agency, just 20 percent of calls to license offices get answered. Multiple calls to the DPS offices in Denton and Flower Mound yielded only busy signals on Thursday — the last day of the month.

Denton residents cannot be served at the Denton DPS office anymore, unless it’s a first license or ID, or the individual is required to present documents in person. Some renewals can be done online, but others require a visit.

To ease overcrowding, the agency opened a small satellite office in the government center in western Flower Mound. But beginning July 9, the agency also told county residents to travel to the Carrollton mega center for service.

Mega centers are larger than most DPS offices. Last summer at the Carrollton mega center, The Dallas Morning News reported wait times of up to eight hours.

At a Houston mega center, average wait times more than doubled from 33 minutes in 2009 to 71 minutes in 2017, according to an April report. However, the average wait is likely longer because Texans sometimes must wait outside the building before checking in because the office gets so crowded.

In the last budget year, DPS issued 3.5 million driver’s licenses and 603,000 IDs. Many people visit one of the state’s more than 200 driver’s license offices to renew their license, which is required every six years for drivers between ages 18 and 84.

DPS aims to process driver’s license and ID applications within 45 minutes, but in 2018, the agency hit that goal only 30 percent of the time — down from 40 percent in past years.

Rajan Viswanathan, 44, lost his license over the winter holidays, and, because he’s not a U.S. citizen, he couldn’t renew it online.

Viswanathan, an engineer for Samsung, spent nearly his whole day last Tuesday trying to procure a new license. He arrived at 11:30 a.m. at an office in northwest Austin to secure a place in line, and since his waiting list slip indicated a wait time of 2 to 2.5 hours, he left to run errands.

By the time he returned, his number had already been called, so he had to start the process again. When he finally left, it was 5:20 p.m. and he had waited an additional three hours.

Viswanathan once lived in California, where he could check the wait times for driver’s license offices online to save time.

“Why can’t I go and do some chore and check what’s online, instead of sitting inside for three hours?” he said.

Working toward a solution

Last year, DPS was under review by the Sunset Advisory Commission, a legislative group that evaluates state agencies. The commission proposed a fix: Change the government agency responsible for the driver’s license program.

As a law enforcement agency, the Department of Public Safety prioritizes anti-crime measures over issuing licenses, according to the commission. Its report found that driver’s license offices lacked basic technology, and DPS failed to properly manage its budget. Between the 2012 and 2016 budget years, DPS diverted more than $8 million from the driver’s license program to fund other agency initiatives. In fiscal year 2017, $7 million of the program’s budget was left unspent.

The commission recommended that an outside party assess the pros and cons of transferring the driver’s license program to the Department of Motor Vehicles, which would require legislative approval.

“We have made significant investments over the past few sessions to reduce wait times for driver licenses,” she said in a statement. “And I believe there is an interest among senators to continue that effort.”

At the start of the legislative session, state Rep. Lynn Stucky, R-Denton, said securing funding for a new DPS office in Denton was among his top priorities.

During Monday’s Senate Finance Committee hearing, senators disagreed on possible solutions. Some were willing to consider transferring the program to another agency while others, such as Sen. Pete Flores, R-Pleasanton, worried that the smaller Department of Motor Vehicles lacked the operational capacity to handle the extra duties.

“None of our offices are fully staffed,” McCraw said. “There’s no question about it.”

Denton Record-Chronicle staff writer Peggy Heinkel-Wolfe contributed to this report. The Texas Tribune is a nonpartisan, nonprofit media organization that informs Texans — and engages with them — about public policy, politics, government and statewide issues. Visit www.texastribune.org.