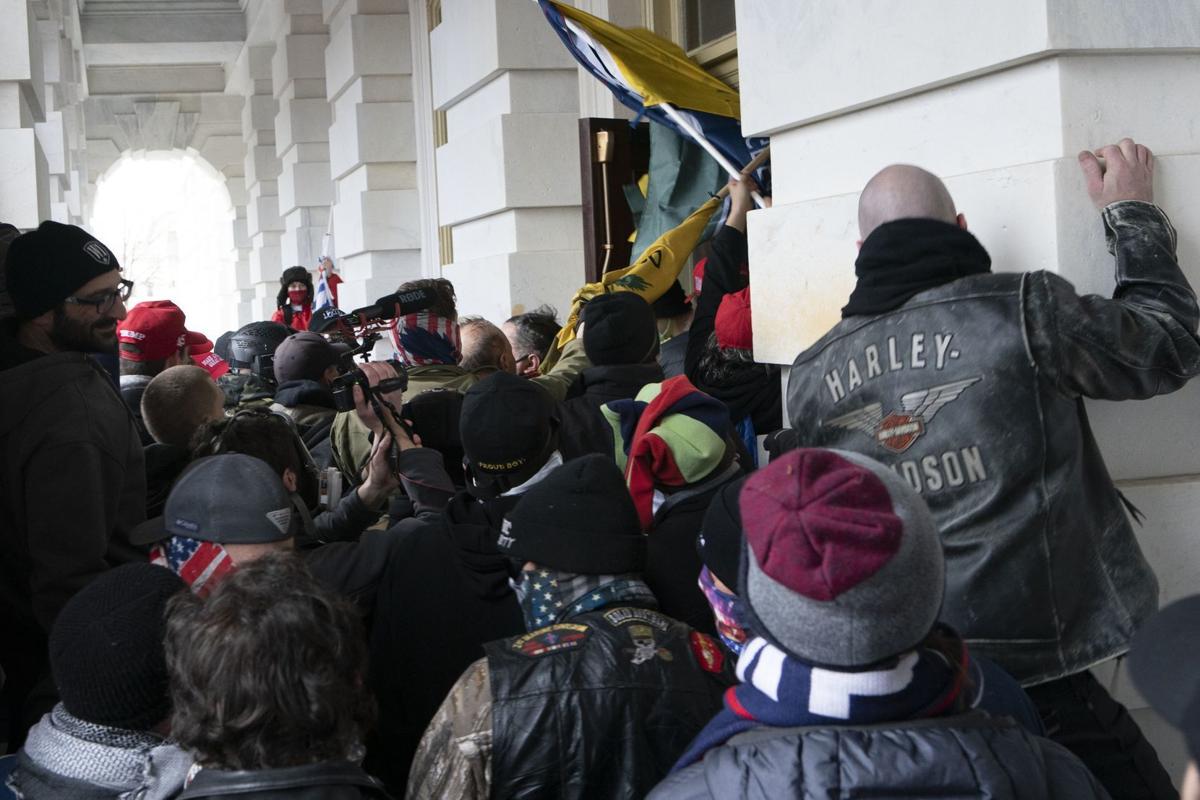 Insurrectionists loyal to former President Donald Trump try to open a door of the U.S. Capitol as they riot in Washington. 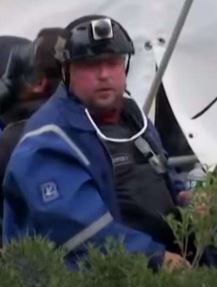 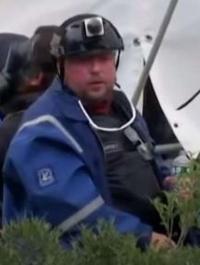 A federal affidavit included this still frame from a Fox News broadcast that authorities say shows Guy Reffitt, 49, of Wylie on the West Front of the U.S. Capitol Building during a riot Jan. 6.

From a U.S. Capitol balcony, handgun on hip, he waved on the mob amassing at the threshold, like a battle commander leading the charge of an attacking army, according to court filings.

“And I climbed up there and I started going up the banister and that’s when everything started moving forward,” Guy Reffitt allegedly said in a secret recording.

“I didn’t make it in. But I started the fire,” he said in another.

Reffitt, 49, reportedly shared his intentions with fellow militia members weeks before the assault, in a chat group using the encrypted messaging app Telegram: “The fuel is set. We will strike the match in D.C. on the 6th.”

The government’s case against the Wylie resident, one of the more serious involving the Jan. 6 siege, is providing more evidence that an armed attack of the Capitol was planned; evidence that was overlooked by the FBI in what critics call a massive security failure. How extensive or coordinated such plans were is a matter currently being investigated by a Congressional committee.

Prosecutors say the unemployed oil rig worker from North Texas was armed with a handgun and equipped with tactical gear and flexi-cuffs when he led the charge up the Capitol steps, toward police. Reffitt was one of the first rioters to make it onto the building, court records say.

But although some brought gas masks, Reffitt did not and was quickly repelled by pepper spray from officers defending the building. But like others, Reffitt wore body armor and a helmet. Prosecutors say his role in the attack was significant and contributed to the violent breaching of the Capitol building by causing a police line guarding the building to retreat.

“By his own admission… the defendant led the charge that pushed back U.S. Capitol Police who were defending the Capitol building, and that allowed other rioters to rush inside, putting hundreds of lives at risk,” Assistant U.S. Attorney Jeffrey S. Nestler said in court filings.

Nestler said Reffitt also recruited members to his militia; formed a security company to secretly arm the militia; ordered bear spray and riot shields; threatened to harm his children if they reported him; and planned future violence and acts of terrorism.

The House panel investigating the insurrection is examining all aspects of the attack, including the numerous online discussions and threats prior to Jan. 6. The committee also is looking into possible coordination between insurrectionists and planners of then-President Donald Trump’s “Stop the Steal” rally that immediately preceded the violence. The committee is seeking phone or computer records for hundreds of people who were believed to be involved in the effort to overturn the November 2020 presidential election results.

Reffitt’s attorney could not be reached for comment. But he has told a federal judge that his client, who remains behind bars, intends to go to trial and fight the charges. A trial date is currently set for February. If that date holds, Reffitt could be one of the first to take his case to a jury.

The FBI seems to have missed or ignored numerous warnings of violence leading up to Jan. 6.

NBC News reported in April that a nonprofit research group found hundreds of social media posts discussing plans to take the Capitol building, including strategies for overwhelming police and maps of the building.

And Washington D.C.’s homeland security office sounded the alarm in vain after noticing growing signs that Trump supporters were planning to violently disrupt Congress’ joint session to certify the Electoral College vote, according to a recent Washington Post report.

Six California men, four of whom identity as Three Percenters, an extremist militia movement, have been charged with more serious conspiracy counts after prosecutors said they plotted together on the Telegram app prior to the uprising.

Reffitt is also a Three Percenter, according to court records. But his failed charge at the Capitol seems to indicate a lack of coordination on the ground with other more serious and prepared insurrectionists.

About 30 defendants have been charged with conspiracy counts, including members of two other right-wing groups, The Oath Keepers and The Proud Boys. Reffitt is one of the few alleged rioters who is said to have brought a gun to the Capitol – a significant aggravating factor that carries greater punishment.

The Post reported that less than 80 of the roughly 650 people charged in connection with the Jan. 6 riot are linked to right-wing extremist groups such as militias.

Prior to the assault, Reffitt and other militia members talked on Telegram about taking the Capitol and dragging out lawmakers who they viewed as traitors, authorities say.

Prosecutors said in a Nov. 5 court filing that Reffitt took part in a group chat in December with over 60 members, including fellow Texas Three Percenter militia members, during which he declared his plan to travel to Washington. “The legislative branch has committed treason,” he allegedly wrote.

Those who identify as Three Percenters hold the belief that “a small force with a just cause can overthrow a government if armed and prepared,” prosecutors said.

In messages, Reffitt said he intended to “surveil the atmosphere for like-minded Patriots and see if we have enough marching with heat,” court records say. He allegedly wrote that he would be in “full battle rattle.”

In late December 2020, one of Reffitt’s family members notified the FBI that Reffitt was “going to do some serious damage” in connection with members of Congress in Washington, D.C., according to court records.

The day before the uprising, Reffitt and another Texas Three Percenter drove more than 20 hours to Washington, D.C., with his AR-15 rifle and .40 caliber Smith & Wesson pistol.

“During the drive, Reffitt talked about ‘dragging those people out of the Capitol by their ankles’ and installing a new government,” the prosecutor wrote.

On the morning of Jan. 6, Reffitt allegedly described his plans for the day: “do the recon and then come back for weapons hot.” He spoke of meeting at the “rendezvous point,” prosecutors said.

Before heading to the Capitol with the mob, Reffitt also announced his intentions to the crowd of Trump supporters at the Ellipse, where Trump’s “Stop the Steal” rally was held. His words were captured on his helmet cam, court records show.

“I didn’t come here to play games. I am taking the Capitol with everybody [expletive] else. We are all going to drag those [expletive], kicking and screaming. I just want to see Pelosi’s head hit every [expletive] stair on the way out . . . and Mitch McConnell, too. [Expletive] ‘em all.”

Some of the police officers who encountered Reffitt at the Capitol later told prosecutors that as a group of at least 50 rioters amassed on a landing below, Reffitt climbed the stairs alone. Police fired nonlethal rounds at him that bounced off his body armor with no effect. His advance was only stopped with pepper spray.

Reffitt would later describe the confrontation to comrades at a militia meeting, records show.

“So then I stepped forward and she started pelting my bulletproof armor with clay balls, and they were just going, pop pop pop… and I looked at her and said, ‘Sorry, darling. You better get a bigger damn gun,’ “ he said. “I was almost close enough to dive for her and take the gun away from her when a man come around the corner with bear spray.”

In his later account at a militia meeting, Reffitt reportedly said, “Nobody was moving forward until I climbed up that bannister.” He said he kept shouting for the crowd to “Go forward” and “Take the House.”

Prosecutors say the officers reported that while it didn’t appear Reffitt had any formal leadership role in the mob, “he certainly opened the door for them and gave them the encouragement and idea to advance forward.”

With the officers distracted trying to stop Reffitt, other rioters – inspired by his efforts — swarmed the building, overwhelming police, Nestler said in a filing.

“And another man, who seemed to have been instigated by the defendant’s actions, and who was wearing a gas mask, charged forward from the crowd and physically attacked the two USCP [Capitol police] officers who had already been engaged with this defendant,” Nestler wrote.

Reffitt’s attorney, William Welch, has argued that the government has relied on “bragging” as well as “generalization, mischaracterization, and exaggeration” rather than hard evidence.

“The Court should be extremely skeptical of believing just anything posted on the internet, bragging, and comments in the news media,” he said in a court filing.

Welch also said in court filings that the government has produced no evidence that his client had a gun at the Capitol. He said there’s also no evidence that Reffitt “vandalized property, used force, or physically harmed anyone.”

Reffitt was later recorded bragging about his role in the Capitol assault, saying he was driven by adrenaline and “knowing that I can’t let my country fall,” prosecutors say.

“I didn’t mean to actually be the first guy up there,” he allegedly said.

While discussing his actions with his family, Reffitt said the insurrection was just the “beginning” of “a lot more,” according to court records.

“And you’ll find out that I had every constitutional right to carry a weapon and take over the Congress, as we tried to do. We went in, they scurried like rats and hid,” Reffitt allegedly said. “There’ll be days your whole life when… you’ll know that your father was there when an epic historical thing happened in this country. And guess what? I’m not done yet. I got a lot more to do. That’s the beginning.”

Reffitt also began messaging two Texans he met in Washington during the riot who he recruited for his militia, authorities say. He promised them “ammo and weapons available to law enforcement” and said his group had a “certified training officer,” court records show.

He said he added the two recruits to the Texas Three Percenters Continental Army Telegram chat, court records show. And Reffitt allegedly told them he was the militia’s “Texas State Intel Officer.”

The question remains: Were alleged rioters like Reffitt who arrived at the Capitol with tactical gear as if prepared for battle part of some larger plan?

Bennie Thompson, the Democrat from Mississippi who is chairman of the House committee investigating the riot, recently told The Associated Press he wants answers to that question.

“Why would you bring bear spray, Kevlar vests, and other items to a peaceful rally?”