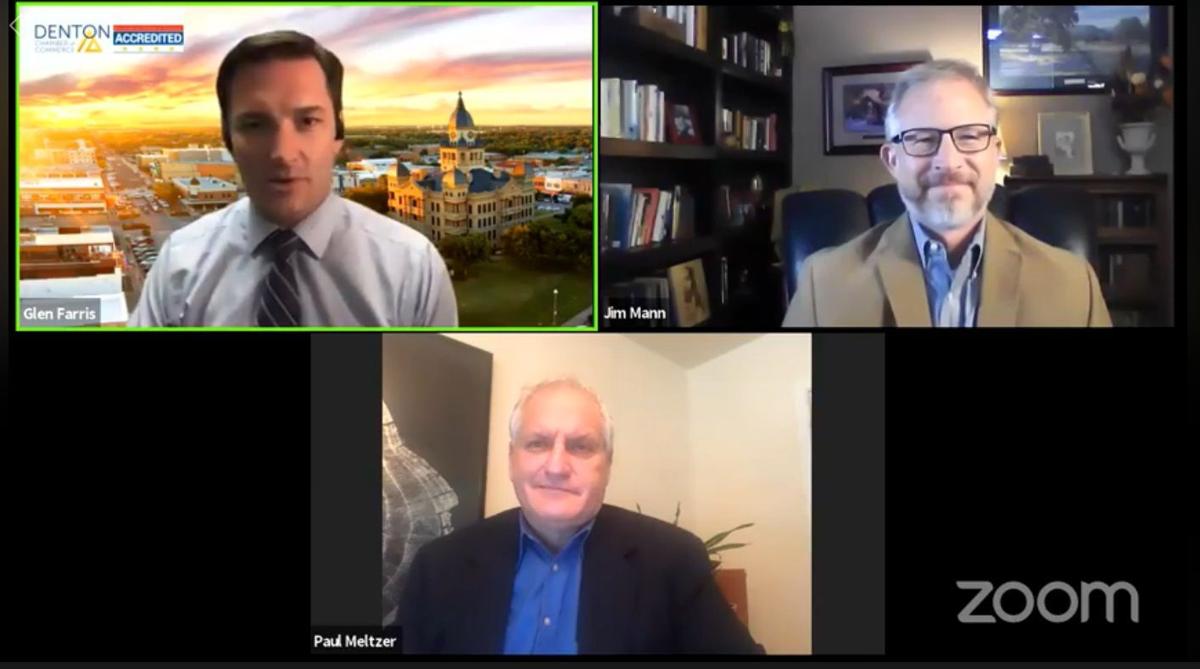 In a livestreamed candidate forum hosted by the Denton Chamber of Commerce on Wednesday, Denton City Council at-large Place 6 candidates Paul Meltzer and Jim Mann shared ideas on how to make one of the fastest-growing cities in the country even better during and beyond the pandemic.

“Our city has taken a heck of a beating — our small businesses especially,” Meltzer said. “We remain open to lifting any barrier, open to trying new things to keep businesses going safely. ... I want our grads to have enticing careers here. ... I feel like I’m part of an extraordinarily productive council.”

The incumbent, Meltzer is in his first term on the council.

“You have to create an environment that’s hospitable for the new world at work,” he said. “The work-at-home aspect of life now demands world-class internet. And part of the appeal of growing in Denton is the quality of life you can find in small cities with universities. That means parks and arts venues.”

Meltzer worked in consumer products and services with divisions of General Mills and Campbell Soup Co., he said. He retired as senior vice president of product management at Insight Communications.

“You need someone on the council who is fundamentally interested in the job,” he said. “I enjoy using my experience to help make good decisions for the community. You have to care just as much about people who have different philosophies and beliefs as yourself. You have a hiring decision to make.”

According to his bio on the city’s website, Meltzer moved to Denton in 2008.

As for Mann, the pastor of New Life Church in Denton, he called Denton “special.”

“It draws you in,” he said. “A lot has changed. The deserted Square is now packed on the weekends. We are No. 2 in the U.S. as a boomtown in America.”

In December, financial advisory firm SmartAsset ranked Denton as trailing only Longmont, Colorado, on its list of the country’s top 10 “boomtowns.”

Mann also said he doesn’t work for a big company. Instead, he started one.

“The first thing we need to do is compete,” Mann said. “We need to protect small businesses and help them reopen. I want what’s best for the city. People are coming here in droves, and growth is unavoidable.”

Mann said he is “the best option” for the office.

“I love Denton. I would like to be your next City Council member in Place 6,” he said. “I believe I’m the strongest candidate.”

A third candidate for Place 6, Liam York, did not participate in the forum.

The final virtual candidate forum hosted this month by the Chamber of Commerce will take place Sept. 30, involving the three Denton mayoral candidates.