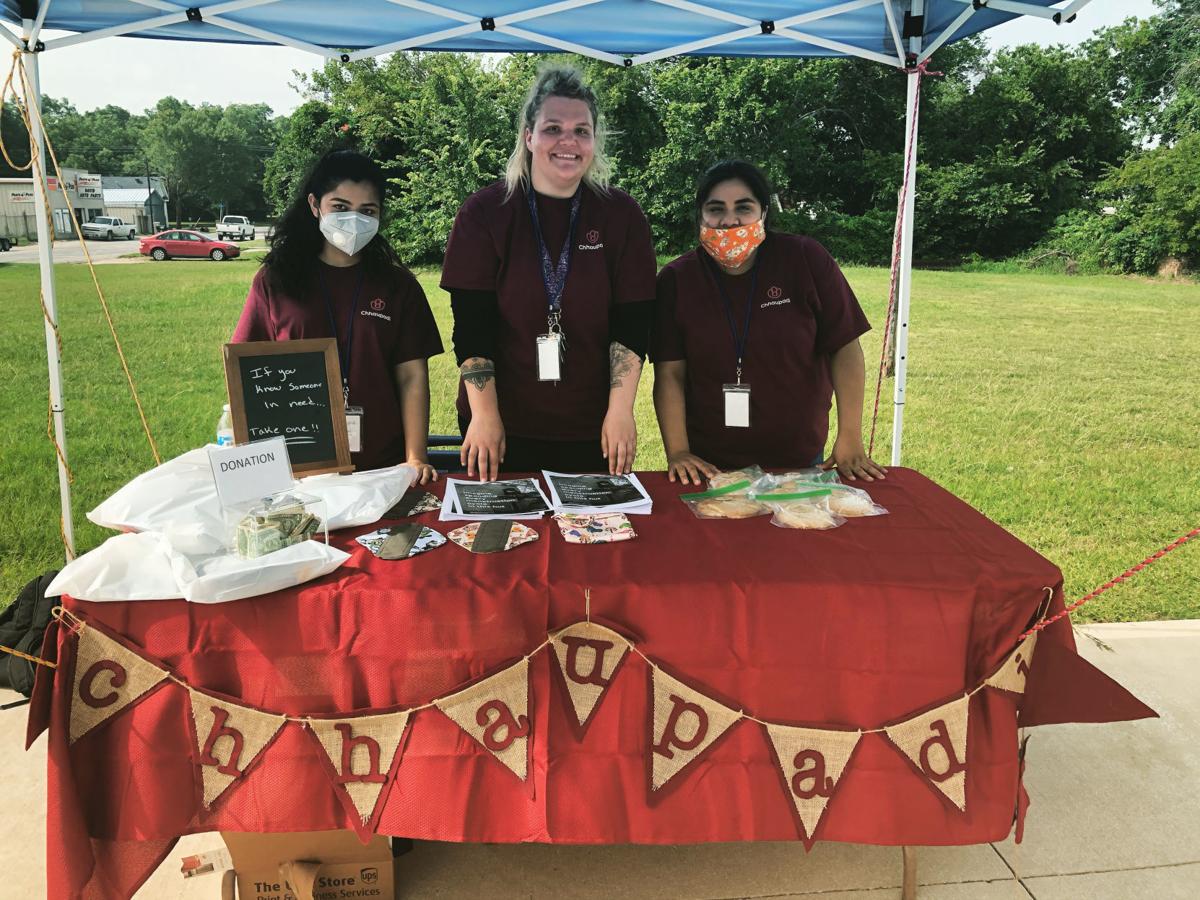 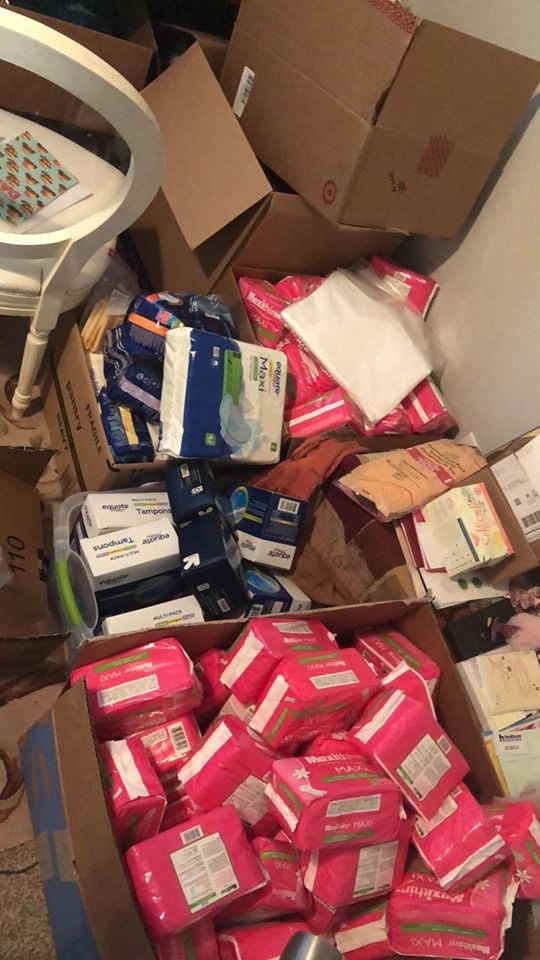 Members of Pilot Point-based organization Chhaupadi collected more than 15,000 donated pads and tampons to donate to women’s shelters and those in need in North Texas.

Members of Pilot Point-based organization Chhaupadi collected more than 15,000 donated pads and tampons to donate to women’s shelters and those in need in North Texas.

These are the words some Hindu girls as young as 8 hear when they get their first period. Under a form of menstrual taboo known as Chhaupadi, they are confined to a cattle shed or menstruation hut for two weeks and unable to interact with family, go to school or participate in daily life. Despite being outlawed in 2005, the practice remains widespread in western Nepal — something the North Texas-based organization of the same name is hoping to change.

Chhaupadi, a not-for-profit group based in Pilot Point, reclaimed the name of the ongoing practice in the hopes of empowering women to embrace their periods. Founded in February, the group is working to destigmatize menstruation in Nepal and fight period poverty in North Texas.

Group founder Jessica Nordon first learned about the practice in 2019, three years after her first trip to Nepal. Inspired to give back to the people there, Jessica began learning more about Chhaupadi’s impact on women and decided to act.

As Nordon discovered, women practicing Chhaupadi face a number of safety risks. Though they must still work the fields, they cannot bathe or wash their clothes and are banned from having meat or dairy products for fear they will sicken livestock. Girls and women have been raped while practicing Chhaupadi, and some have died, either from illness brought on by unsanitary conditions, exposure to extreme temperatures or animal bites, or in fires started in the poorly ventilated huts.

Access to sanitary products is scarce, increasing the risk for gynecological problems.

A large part of the Chhaupadi group’s mission is to increase access to sanitary products for at-risk women by donating pads and tampons. After canvassing locally and hosting their first fundraising event at the Pilot Point Farmers Market on June 27, the group has collected about 15,000 sanitary products, which it plans to donate to the homeless, domestic violence safe houses and women’s shelters across North Texas. Chhaupadi also is planning a trip to Nepal to buy and distribute supplies there, although with COVID-19 continuing to impact travel, the members aren’t sure when that will be.

For outreach assistant Surabi Thapa, the cause is personal. Though she said she grew up in a more developed region of Nepal than those where Chhaupadi is observed most strictly, she experienced a form of the practice as a child.

“I was about 9 years old when I started [my period] the first time,” Thapa said. “I came home and told everybody, and immediately as I did that, all my male family members left, and I couldn’t see them for the next five to 10 days. I was in one dark room for about seven or eight days, and I missed out on school.”

The practice is deeply rooted in Nepalese culture, Thapa said.

“As you’re going through it, since you’re in the villages, you’ve grown up with this, nobody thinks it’s a wrong thing to do at all,” Thapa said. “Even if you talk to these little girls, they will willingly go into these sheds and think they’re doing something for the family.”

Thapa said she got involved with the group so other girls won’t have to experience what she did as a child.

“These cycles we have are not anything that is actually impure like in my culture they believe it to be,” Thapa said. “You menstruate, it’s a cycle of fertility — it’s not anything to be ashamed about at all. It’s definitely not something that should be isolating women and putting them in these dangerous situations where they feel like they have to hide their natural process that happens to everybody.”

Although Chhaupadi is not knowingly practiced in the U.S., stigma and period poverty persist. A 2019 survey by Thinx found that 1 in 5 teens struggle to afford period products, and lack of access to products resulted in missed class time for 84% of respondents. A Saint Louis University study found 46% of low-income women in St. Louis said they’ve had to choose between food and menstrual products, and over 60% of male and female respondents to a Female Forward Together survey said there is a societal stigma around periods.

Texas is one of 33 states to classify tampons as luxury items rather than medical necessities, meaning they are subject to sales tax. Locally, Chhaupadi members say they have seen greater need for donated products as COVID-19 has affected people’s incomes — and the ability for some to give as they face their own financial difficulties.

“It’s hard because no one wants to go out because of COVID,” Nordon said. “It’s hard to ask people to donate because a lot of people are out of work or their businesses aren’t doing very well.”

Donations will also go toward establishing the group as an IRS-recognized nonprofit organization, which would allow supporters to receive tax breaks. Members hope the group can partner with other nonprofits that do work in Nepal, in order to amplify their collection efforts, but the coronavirus pandemic has limited what many organizations can do.

“We can’t really act on our whole plan, which is to meet a lot of the organizations here that are already working toward this cause and also network with those back home in Nepal so we know exactly what the needs are and how we can help,” Thapa said.

Despite limitations on the group’s availability to host large-scale drives because of the virus, members plan to continue grassroots collection efforts, using social media to get the word out. Nordon said she personally picks up donations around North Texas, and Denton-based Soho Salon was established as a drop-off location in June.

Internationally, Chhaupadi has partnered with Nepal Orphans Home, where Nordon said their first box of supplies helped 41 girls. Though they admit it is a modest start, they say they hope to continue seeing the positive impact of those donations magnified as their initiative grows.

“Right now, it’s a little bit hard, but hopefully we’ll be able to partner with these organizations and do events together,” Nordon said. “Everyone has the right to have their period with dignity and in a safe environment and have access to period products.”

To learn more about Chhaupadi, visit the group’s website at www.chhaupadi.org.